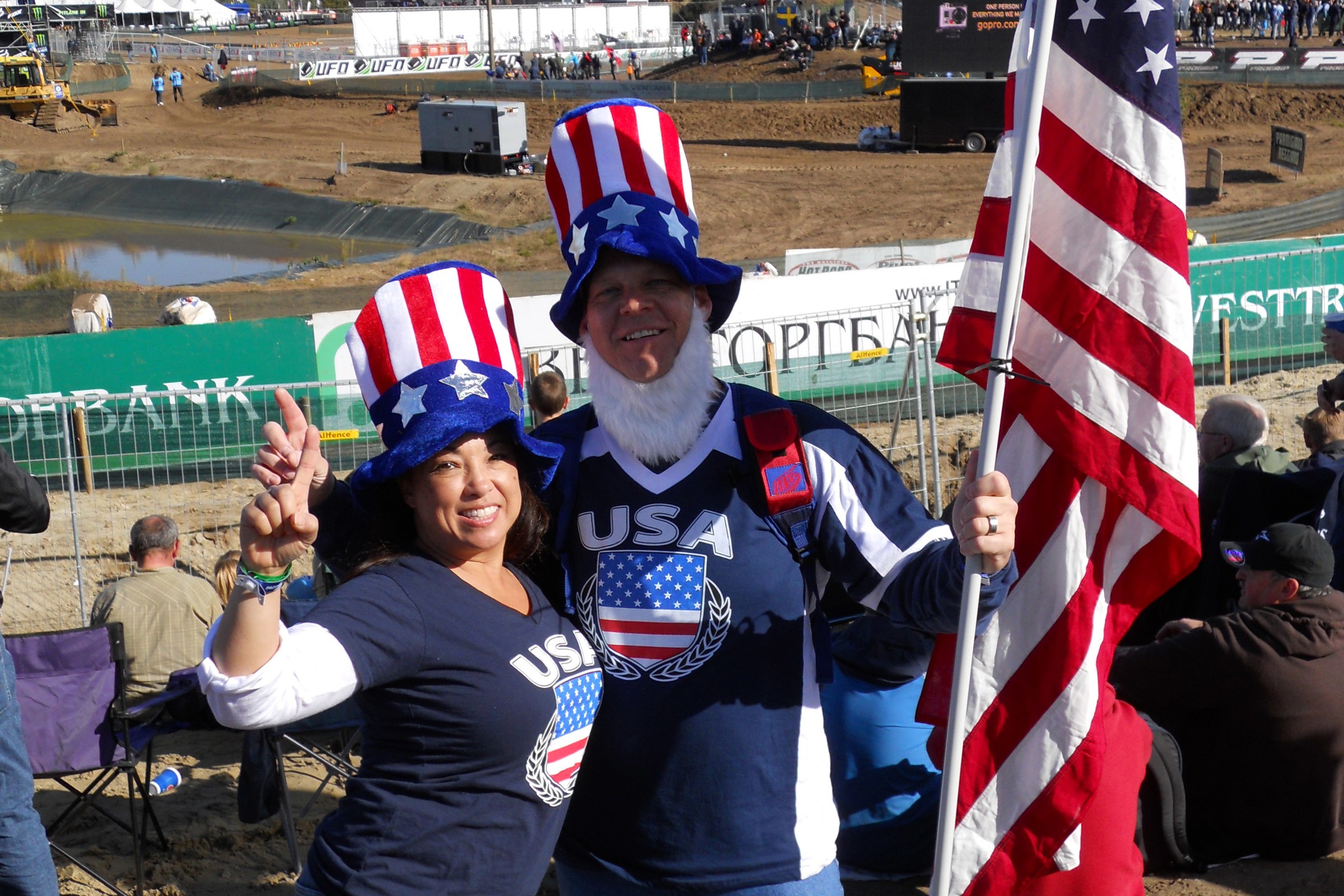 Tell Us a Story World Travelers

The race is more than a month away, but we already know it will be the most epic motocross experience of all time. It’s coming October 6-7, 2018, when the Monster Energy FIM Motocross of Nations comes to RedBud. Combining this track with this event is an idea literally 60 years in the making. If you haven’t already been to a MXoN in person, you don’t know what you’re missing. We’re reaching out to you, the fans, to hear your stories of attending Motocross of Nations in the past. Email online@racerxonline.com with the subject line "MXoN Story" for a chance to be featured.

Former Troy Lee Designs employee Cory Clark sent us this account of six years of traveling around the world with his wife for the Motocross of Nations.

This is the story of how the MXoN has changed our lives.

Back in 2012 when Nations was being held at Lommel, Belgium, my wife and I decided it would be a great time to go on our first European vacation and see our first European MXoN. I had been to the event at Budds Creek in ‘07 and Colorado in ‘10, but had heard the overseas versions were even better. What better place to experience our first Euro MXoN than the home of “The Man,” Roger DeCoster!

We were lucky enough that I had met some friends, the Winstanleys, from England a few years back, who also collect moto jerseys like I do. It was agreed we'd meet to go to Nations together. Having someone who already knew their way around and do all the driving made the trip so much easier. We stayed in Eindhoven, actually, where bicyclist outnumber cars ten to one. We spent much of our driving time avoiding these "zombie cyclists" as we made our way to the track each day. After a brief stop to try and get some directions from a local farmer—"motocross track" are universal words, apparently—we made it to Lommel. It was as sandy as they say! My first stop was to get to the edge of the track to hang the Stars and Stripes over the fence as Ryan Dungey raced past. A French woman wasn't too thrilled that I blocked her from taking pictures of MM25 and tried to yank the flag from me, but I wasn't having any of that. Ken Roczen was the star of the race and Team Germany won for the first time. This was the first year Team USA had lost in a while, so that was about all I want to remember about 2012.

We were back with the Winstanleys, our personal tour guides, although this time I did some of the driving. Getting to cruise the Autobahn at well over 120 MPH was the highlight of trip. I spent much of the race yelling "Tomac" while a large German guy was yelling "Roczen" directly in front of me. The battle they had was amazing, and in the end, the big German guy turned around and yelled "Tomac, "so I gave him a "Roczen!" Then we hugged in a showing of peace between nations. Unfortunately, another Team USA loss.

Not much to say: We missed the race and Team USA lost—again. This was about the same time I left my job at Troy Lee Designs after over a decade of being there. As a thank-you, Troy painted me this custom Team USA MXoN helmet and gave it to me on my last day. He knew my year revolved around going to the race and how much it meant to me, so to get that helmet as a going-away gift meant a lot. That helmet is, as he would say, "bitchin’!" It helped make missing the race that year a little easier.

Let me start by saying the French crowd was the loudest, most patriotic, and enthusiastic I've ever experienced at a race. When they sang their national anthem after their win, it was like the entire country was there rallying around the French team. Our boys rode amazingly, but the French were too strong that year. Another USA loss, but seeing the sights of Paris, the Eiffel Tower, Monte St. Michel, and the Palace of Versailles made it well worth the journey. This was also the first year my buddies Jeff and Jesse arranged for us to get the full VIP treatment. The hospitality tent, food, paddock passes, and some pics with some Team USA riders were the highlights for me.

For this edition, we stayed in a small town by Lake Magiorra, called Stresa. If you want to know where Walt Disney got his landscaping ideas, it was here. Incredibly colorful gardens outside every hotel, views of the lake, and, of course, some amazing Italian food. It was here we met up with another friend we'd met at the race, Massimo, who is the Troy Lee of Italy. He invited to his home for a home-cooked Italian meal, where his wife and her sister made this amazing USA pie. We shared laughs, authentic Italian food, and bench raced about the event. Team USA lost, but the pie helped wash the sour taste from our mouths.

Rain. Seely's broken shock, twice! More rain. And another USA loss. This was the worst edition we've been to so far, but we again had the Winstanleys as hosts. We stayed with them in their renovated bar on an apple orchard, way out in the boonies. It was very peaceful there, and we visited several local churches where the architecture inside would blow your mind. Things move at a much slower pace over there and not every building is square. The race was horrible, but we did get to see London, Bath, Stonehenge, and Windsor Castle before we flew home.

Remember back to our trip to Italy in 2016? My friend Massimo, who took care of us there, said he had never been to a supercross. So this year, we said, "Come to our house and we can do A1 together.” He and his family all flew over and we put them up in our house. As a thank-you, he painted me this custom Team USA MXoN-themed helmet as a gift. Insane! The next day, we headed out to Anaheim for the race. I'll never forget as they sang the national anthem and the Monster Energy fireworks went off, I could see Massimo was in tears, realizing a lifelong dream of his to see a supercross. That made my night! Much like he had done with that helmet he painted for me, it was cool to give a little back and see someone else who enjoys racing as much as I do.

We've met some amazing friends along the way, and wherever the MXoN goes, we go. It's a great way for me to get my moto fix, and my wife gets her vacation in a new country each year. If you ever get the chance to experience the MXoN overseas, it's a must-see. It's changed our life!

I just need a Team USA win. See you on the fence!