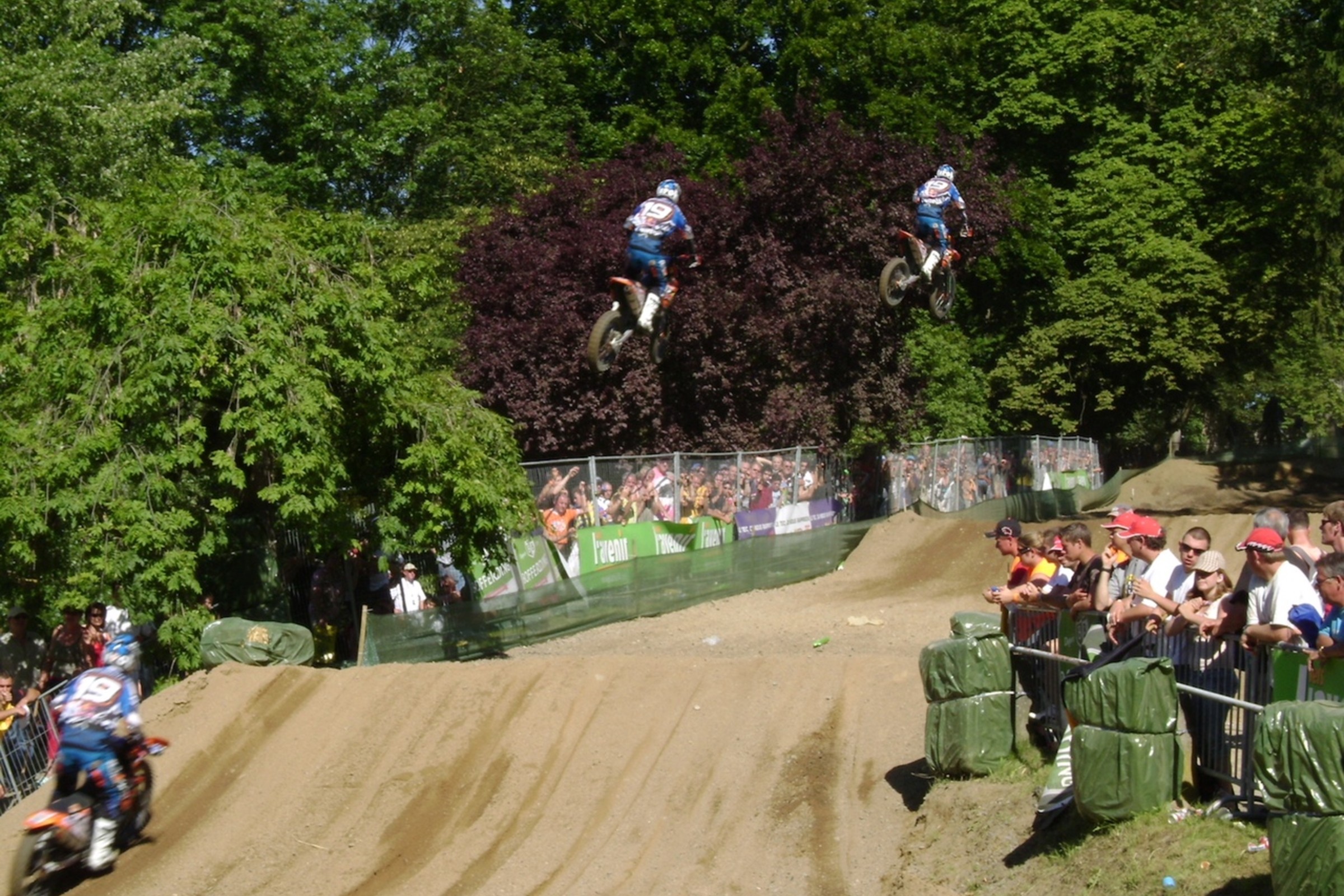 Tell Us a Story Mega Euro Trip or Mud Fest?

It's here! The Motocross of Nations is this weekend! Thanks to everyone who shared their stories. We enjoyed all of them!

I'd raced MX since I was about six, and my brother and I were at the level to qualify for Australian Nationals (yes, I threw in a photo for proof). I had a pretty bad practice crash (broke two vertebrae and was knocked out for a few hours) and decided I follow university instead (I got an opportunity to study in the Netherlands in 2001-02 just after I recovered from my back injury so I went for it).

The MXoN was just down the road in Namur, Belgium, so there was no way I would miss it. Luckily we had a few days break from school at the time, and I was able to round up some non-moto friends from university and we made a unforgettable Euro Trip.

Stop 1: Experience Amsterdam. Not really related to motocross, so I'll not incriminate myself here!

Stop 2: (My memory of the event was a bit hazy, but the other stories gave me the thought to watch the races online. I'd never seen the televised event, but it brought back great memories watching it after so long!)

Arrived at Namur in the morning at an awesome venue; the track is in a fu**ing castle! It doesn't show, but on the uphill to the stadium there is like a 30 meter drop over a wall if you happened to lose control and go left! Some bits were a bit one lined, but the atmosphere was epic. The shit part is that 9/11 happened just beforehand and the US team didn't go. Absolute shame. But it also meant many teams had a good chance to win.

For moto one I suggested (for a good view and to give my non-moto mates a shock) we get a prime spot at the end of the start straight. I couldn't believe it, we were two meters from the track, directly at the end of the start straight! Definitely something that you couldn't do now at an MXGP, or ever in Australia! After my mates recovered from minor heart spasms and we wiped the mud off, Stefan Everts put on brilliant show. Easily the smoothest guy I'd seen ride a motorbike (yeah not original, but what else can you say) and he smashed the first moto. For the Aussies, I don't remember if was moto one or two, but Michael Byrne crashed and was out, so that meant Australia didn't have a chance for the overall win.

Between motos the bottom straight, which was a normal road with tons of dirt on top and had a double stuck in the middle, turned into a bar. There was a regular bar literally five meters from the track, and between races it just over-flowed onto that part of the track. Awesome atmosphere, and again something that would never happen in Australia! There is a photo I made from that bar of someone (not sure who!) going over that double. Inspired by the Fox ad of RC doing a nac nac from around then.

Moto two was great for Chad Reed. I'd seen him ride a few times (for instance when he lapped me in the nationals) and it was awesome to see him destroy that race, and if people weren't sure before, it was clear he was going to win many more races. The funniest part is that after the race he seemed disappointed in an interview. It's like he didn't feel like he really won because RC wasn't there. I guess he trained hard to race him, but anyway he had plenty of chances later on. Watching David Vuillemin and Steve Ramon ride was also great. Not sure what happened to Ramon's career but he placed pretty high on a 125 there I thought.

Moto three: Andrew Macfarlane got into the lead early, and we gave him as much support as we could each time he came around. Don't think he could hear anything over the chainsaws and air horns though! Then we found another bar, drank and ate mountains of "Belgian fries" for the rest of the moto at the edge of the castle walls. Reed didn't get a good start and had a shit moto. It was a close fight for the win between France and Belgium and their fans were going absolutely nuts!

Epic day, I got to see a heap of childhood heroes (Everts, Smets, etc.), some up and comers at the time (Reed, Macfarlane, Vuillemin) and people with cool names (Pit Beirer) ride hard all day. Yes I may have had a moto boner. My story didn't have me meeting any of the riders, but in hind sight I should have crashed the pits.

Stop 3: That night we got some more beer and fries and got an overnight train to Germany. Yes, Oktoberfest awaited. You know how that goes: tons of beer, some chicken, and stupid dancing. Plus Dirndls, Google it. We were getting an overnight train back to the Netherlands that night too. Definitely a bad idea. We were absolutely smashed, and accidentally (?) got in first class with TVs and nice seats. A conductor came and tried to check our tickets. One of my mates is Scottish and started yelling something at him that we couldn't understand. The conductor stopped, looked at our state and decided to move on and let us be. Classic! Free upgrade!

Eventually, I don't know if we got the wrong train or if there was ever a right train, but our train stopped at the German/Netherlands border at about 2 a.m. We were the only people on the train, there were no hotels and taxis nearby. We surely didn't have smartphones then, and I don't think any of us had a phone the even worked in Germany. So that meant we slept under a bridge and got the first train the next day. Pity the folk who had to sit next to us on the train back to Holland!

If you are still reading you probably wonder what I meant by mud fest in the title. Well, I since have moved back to Europe and married (who would have thought that would happen?) a great British women. She didn't know beforehand, but I found out she grew up a 30 minute drive from Matterley Basin. So MXoN 2017 was must see race. It was an absolute mudder! I think the track was even in better condition than the pits. But the racing was awesome, and it really came down to the wire for the overall win. The track layout is perfect for spectators as, like another guy said, you can see most of the track from most viewing spots, unlike Namur. There wasn't debauchery from my side this time, however some of the Dutch fans were absolutely mental, and at the end of racing made a bonfire out of anything they could find. Most of us around that lost three years of our lived from lung poisoning due to that!

The event even convinced my sister-in-law to be a moto fan. Not a bad effort.