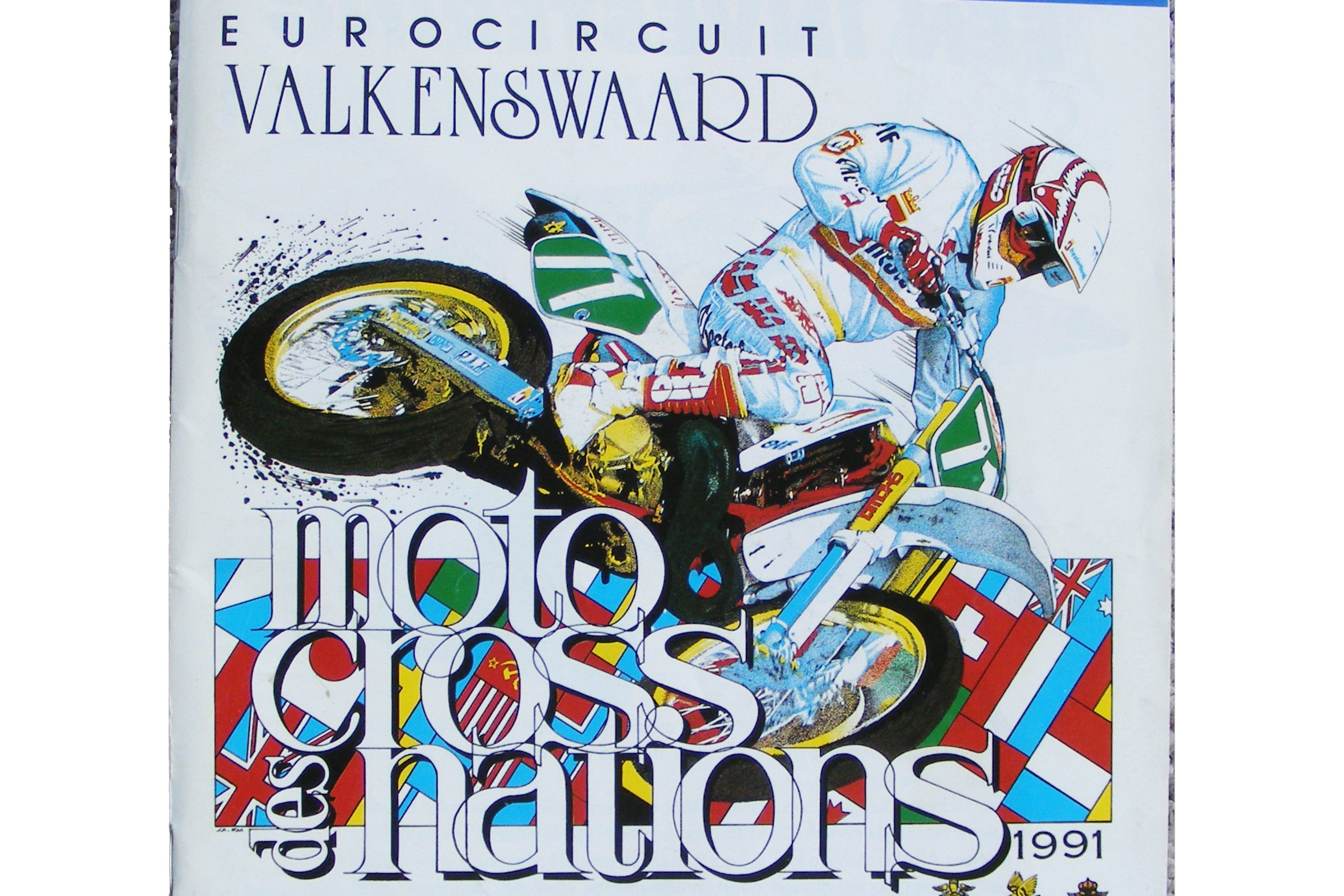 Tell Us a Story Stanton’s Heroics in Person

The race is just over a month away, but we already know it will be the most epic motocross experience of all time. It’s coming October 6-7, 2018, when the Monster Energy FIM Motocross of Nations comes to RedBud. Combining this track with this event is an idea literally 60 years in the making. If you haven’t already been to a MXoN in person, you don’t know what you’re missing. We’re reaching out to you, the fans, to hear your stories of attending Motocross of Nations in the past. Email online@racerxonline.com with the subject line "MXoN Story" for a chance to be featured.

In this week's feature, an Ohioan journeys to Valkenswaard to see Jeff Stanton dominate at the Dutch track.

In 1991, I frequently traveled from my Ohio home to Bristol, England, to work at a sister company. With some luck and a helpful co-worker, it was my good fortune to join a British motocross club tour bus headed for the MXoN in Valkenswaard, Holland. The tour bus boarded an enormous ferry boat in Dover, crossed the English Channel, landed in France, crossed Belgium, and finally arrived in Holland on Saturday morning. Holland was a pancake-flat, squeaky-clean country with lots of bicycles—a point underscored when the first passenger off the bus in Valkenswaard was immediately T-boned by a bicyclist!

There was ample time for bench racing along the way. The MX club members were very knowledgeable; some had worked for MXGP teams and were well aware of USA’s ten-year win streak dating back to 1981. This prompted many questions like, “Will the Yanks get beat this time?” I responded with polite confidence in another USA team victory. Not well received was my enthusiastic retelling of the 1986 Maggiora MXoN, especially 125cc rider Johnny O’Mara’s pass on 500cc FIM Motocross World Champion David Thorpe. Too soon?

On Saturday afternoon, we visited the Valkenswaard track. It was a massive facility, a pure sand track with no elevation except man-made jumps and hills, the largest grandstands I’ve ever seen at a MX track, and a very popular beer tent. I purchased an official event program and was surprised to see a large USA flag pictured at the centerfold. Team Belgium riders held the flag at one end while Team Holland riders held the opposite end as they attempted to tear Old Glory in half. I’ve never felt so welcomed! The event t-shirt had Jean-Michel Bayle’s image on the front, even though he wasn’t racing. Bayle bailed on his homeland due to some last-minute beef he had with the French Federation.

In timed practice, Team USA was a couple seconds off rival Belgium and Holland. Of course, everyone wasted no time pointing this out to me.

Saturday night was the pre-race party in downtown Valkenswaard. It was like Daytona Bike Week without the Harleys.

Sunday’s championship races began with an impressive opening ceremony—I’ve never seen a marching band at a MX event. The race format back then was a bit different than today. Everyone was riding two-stokes, and the three classes were 125cc, 250cc, and 500cc, with one rider per class from each nation. Like today, there were three motos, with two classes competing simultaneously in each moto, but unlike current practice, each rider was scored relative to other riders in their class (today, riders are awarded points based on their overall finish in the moto, regardless of class). In the 1991 format, a 125 rider might cross the finish line eighth but be awarded first in his class (one point) if there are no other 125 riders finishing ahead of him. This made it harder for spectators to figure out rider position as they ran. Races were called in both Dutch and English, but the announcer’s accent was so thick I couldn’t understand very much.

The first moto was 125/500 bikes with Mike Kiedrowski (125) and Jeff Stanton (500) competing for Team USA. Stanton got a fair start and Kiedrowski a horrible start. Stanton gradually worked his way to the front, passed the leader Marcus Hansson (Sweden) and pulled away to a 30-plus second win. Meanwhile, Keidrowski was struggling; his Kawi seemed to bog exiting the sandy berms compared to rival 125s. He finished fourth in the 125 class. Belgium’s 125 rider Stefan Everts finished first while their 500 rider Dirk Gukens was fifth. At this point, Team USA had a one-point lead over Belgium.

The second moto was 125/250 bikes with Mike Kiedrowski again and Damon Bradshaw (250) competing for Team USA. Bradshaw got a good start and eventually worked his way to the front, but faded towards the end and was passed by Belgium 250 rider Bervoets for the win. Everts was again first 125 with Kiedrowski much better in second. In this moto team USA had 2, 2 finishes versus Belgium’s perfect 1, 1. Heading into moto three, Belgium was slightly ahead to Team USA, who was ahead of Holland.

Being fully aware that a USA victory was not assured and dreading the long bus trip back to Bristol if we lost, I was a nervous wreck. So, I departed the British fans seating in the grandstands and set out to watch the final moto trackside—by myself!

The final moto was 250/500 bikes with Bradshaw and Stanton. Stanton got a top-three start with Bradshaw a ways back. Things were looking good, but before the first lap was over, disaster stuck—Stanton crashed hard and remounted in last place. “That’s it,” I thought, “Team USA’s long win streak ends here.” Fortunately, Stanton had other ideas and started make a furious charge. While walking the track, I chanced upon some American fans next to the most brutal whooped-out, rain soaked section of track. Most riders were coming through in “survival mode” except Stanton—he was manhandling the potent Honda CR500 as if it were a 125, attacking the section more aggressively than I have ever seen a 500cc two-stoke ridden! The American fans were going crazy as Stanton mowed down the whoops and the competition, but would it be enough? I really didn’t know! The 250 riders were leading the race overall and Stanton was a good ways behind them. The real question was, how he was doing relative to other 500cc riders? The race ended in a blare of air horns and excited, incomprehensible announcements over the PA.

After several long minutes, it was clear: Stanton won the 500 class and Team USA had prevailed yet again—they were the 1991 MXoN champions! Elated, I began making my way to pits and reached the USA pits just as Bradshaw and Stanton arrived. I gave each a congratulatory pat on the back, but it landed lifelessly as each rider was completely spent. After celebrating with a couple dozen American fans in the pits, I started making my way back to the tour bus. Only then did I realize I didn’t really know where the tour bus was parked. When I couldn’t find it, a moment of panic set in—had they left me behind? When I eventually found the bus, everyone else was already on board. I did my best to be humble and gracious. Although the British fans were disappointed, most said America deserved to win.

At dinner that evening, everyone talked about Stanton’s epic ride. Appreciation for Stanton as a whatever-it-takes rider and a love for motocross seemed to unite everyone. I actually felt a strong sense of American pride, and, being in a particularly good mood, opened my wallet, blew out the cobwebs, and brought a round of drinks.

Departing the next day, I purchased the local newspaper. The sports section had full page of race coverage. The headline read, “Amerikanen blijven overeind,” which roughly translates as “Americans remain undefeated.” The trip back to Bristol was uneventful, and I thanked the British MX Club for the wonderful opportunity they provided me. I really did enjoy seeing the race from their perspective. Upon returning to Ohio, I pinned the newspaper article to my office bulletin board, where it remained until I retired in 2015. It was then framed and hung on my MXoN tribute wall at home.

This is my only international MXoN race, and despite having seen many Pro Motocross races dating back to the early seventies, I remember this race most vividly. I can still see Stanton’s heroic ride in my mind’s eye.