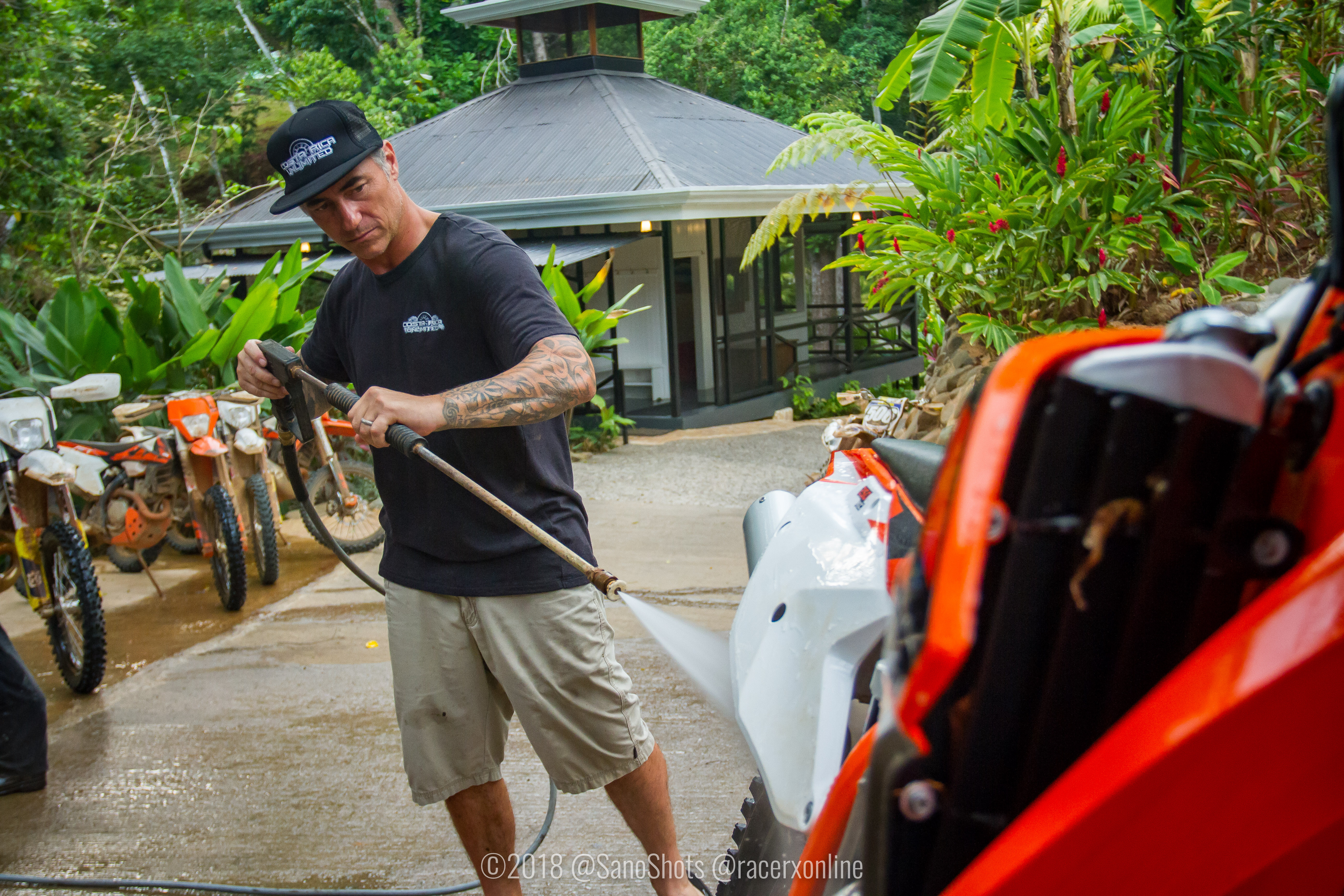 Chris Kilbride is one of the co-owners of Costa Rica Unlimited, a great motocross vacation and tour company in Costa Rica that David Pingree and I visited a few months ago. Ping wrote a great story about our trip in the August issue of Racer X Illustrated that you should definitely check out.

In the story, Ping describes Chris as someone who’s immediately best friends with everyone he meets, and it’s true. He’s one of the most laid-back guys I’ve ever met. Chris hails from San Clemente, California, and grew up surfing and terrorizing the local trails on his 80cc before Orange County was littered with houses. After high school, he spent 11 years in Florida before moving to Costa Rica for the surf. After meeting a local named Carlos—one of his now-business partners—he discovered the amazing riding throughout the country and he was hooked. One thing led to another, and Costa Rica Unlimited was born.

Racer X: How did you end up in Costa Rica?
Chris Kilbride: I actually moved down here to surf. I never knew the riding was so good down here. I got a dirt bike as soon as I got down here and just started riding and that was it.

How did you find all the trails? Did you discover them on your own or did you meet some local guys and they showed you around? How did that all start?
Carlos, my partner, he had an XR 400 for sale. He was working at a pool company and I stopped in there and we started talking. He goes, “You haven’t ridden here?” I said, “No.” He goes, “Get a bike!” I went and bought a bike the next week and him and I started riding, and we’ve been partners in this ever since.

How long into living in Costa Rica did you guys start the business?
I must have been down here about five years before we started it. We started it in 2007, and I moved down here in 2002.

How are things going with the business? You guys seem to have a tour practically every week.
The tours are great. All of them are good. We stay busy about four or five months out of the year. Your guys’ winter is our summer. When the weather is bad up in the States and Canada, it’s a perfect time to get out of your hometown and come ride down here.

Who are your primary customers?
It’s crazy. We get people from all over the world, which is a great thing. But I’d have to say the United States is our number one, and Canada. Then we get people from the islands, Brazil, Tahiti, France, Sweden, everywhere.

When we were on tour, how many guys did we have?
When you guys came, I think there were 12 of us. It was on the Russell Bobbitt tour.

That tour was a little unique to your typical, right? That was a little bit of a different situation where it was like “come ride with Russell” kind of thing with mostly individual guys. How do you you typically recommend people set up their trip? Do you typically encourage people to get a group of their buddies together and come down like that?
Everybody’s so different. We try to do every tour to exactly suit the guy or guys who are coming. We get single riders that come down. Just a single guy, or two guys come down, and we’ll get people who come with their whole family. Maybe just two or three of the guys will ride, and the rest of the family will be here. Eight, ten people. Everyone has the vacation and the guys go out riding. So ideally, it’s whatever you want. That’s why it’s Costa Rica Unlimited.

You definitely do a good job of tailoring the whole trip to what the guys want. The first day we were riding, you tested everybody out to see what their riding ability is, and then you’re able to tell which trails they’d be best suited or looking for, right?
Yeah, the first day is always getting to know everybody and seeing where everybody is and how everybody is doing. I don’t know if it’s for everybody, but the majority of people, myself included, I’ll go ride with my buddies just in another town or a couple hours away. I’ll get arm pump, all kinds of stuff. It’s just different. It’s different riding somewhere that you’re not used to, and also, too, all our bikes. You’re not on your own bike. Our bikes are pretty much stock. So it’s just getting to know everybody the first day. We don’t want anyone getting hurt on our trip, so we really feel everybody out. We want everyone to have a great time and be pushed on every one of our tours, also. There’s a lot of memories being made down here—pushing in the mud and getting up hills and all that. It’s just all part of the adventure.

What’s the weather like down there? There’s basically a rainy and dry season. When are those times of the year?
The rainy season is you guys’ summer. June to November, more or less. If you look on the weather, it says it rains here every single day. You really can’t trust the weather. A normal rainy season for us is, we’ll get an afternoon shower around 3:00. Sometimes it will rain during the night, and then not. But that’s our normal rainy season. It’s kind of like Florida rainy season. Just with all the mountains and everything here, all the water’s running. Our dirt, we got a lot of red clay and black dirt, so it gets slippery and stuff. But the dry season goes the same way. When the spots where it gets dusty, it gets really slippery. Year-round, it’s just different. We only have two seasons, and the riding changes two times a year. The nice thing about that is it is always changing. It’s never the same. But as far as what season is better, I really love the rainy season. Zero dust, all the rivers are flowing. It’s just amazing here in rainy season.

How much rain would you say you guys could typically get in a day in the rainy season?
I would say an inch or two inches is probably normal, and then we’ll get up to ten inches some nights. It just all depends. But it runs off fast. It’s not like it floods. It’s all steep here, so it runs down fast.

We did a cool little video tour of the compound.
We were just showing off what houses we have for the accommodations. It is really first-class, all the accommodations for everybody. We really like for the wives and girlfriends to come, too. It’s always such a good time. All of our houses and stuff are super clean and nice. Actually, when I hang up the phone with you, we’re just going to get started on a pool project here over the next couple of months. So in 2019, the pool will be in.

Where are you guys located in Costa Rica?
We’re right up on the hill from Playa Hermosa and right down the road from Jaco. But we’re right in the middle of the riding. We don’t have to get on any paved roads or anything to leave where we are. We’re just a stone’s throw away from the restaurants and beach and everything else. It makes it super easy for everyone to have a good time.

How many houses do you guys have on the property now?
There’s seven houses on the property total at the moment. Four of them we use for the tours. The others are for the staff. We got some more plans for the future. We’ll see how it goes. We keep buying new bikes and new pool and putting a little bar and restaurant in. Just trying to give it more of the lodge feeling for everybody.

Speaking of the bikes, what’s in the arsenal right now?
All of our bikes are 2018 and newer. We’re trying to stay right with the same model year. We have KTM, Husqvarna, and some Yamahas. All our bikes are either 250s or 350s, and we have some 300 two-strokes.

You have two types of tours, right? You can either stay at the compound and go out and come back each day, or you tour around the country and stay in a different hotel each night. Can you talk about the different types of tours you do?
Yes, we have two styles. We have the outback, which is our most popular. That’s just when we stay at the compound and we ride out of here every day and come back. In the slow season, we’ll go and we’ll do the loop tours, where we go and travel around the country. We always start from the compound and then travel around the country, where we’ll stay in different hotels every night. We usually do that five or six nights in a row. Those are really good for the big groups. They want to come, they want to travel, they want to see the country. This country is amazing what you can see out there on a dirt bike.

I definitely can say firsthand that it’s the coolest thing I’ve ever done on a dirt bike.
That’s a great thing. That’s what we’re striving for. We say this to everybody, “We treat you all the same, like we’ve known you forever.” So there’s lots of joking. Nobody really takes anything too serious on the trip. It’s just about making new friends and having a good time. Everybody comes. You never can say what they do for work because it’s amazing the guys that come. All walks of life, everybody. Just anyone who enjoys dirt bikes or a little adventure, come on down. We’d love to have you and have a good time.

Where can people find more info about setting up a tour?
You can visit www.costaricaunlimited.com.

Is there anything else that you’d like to add?
Dirt bikes, surfing, friends, family, good times, memories. Sounds good to me.