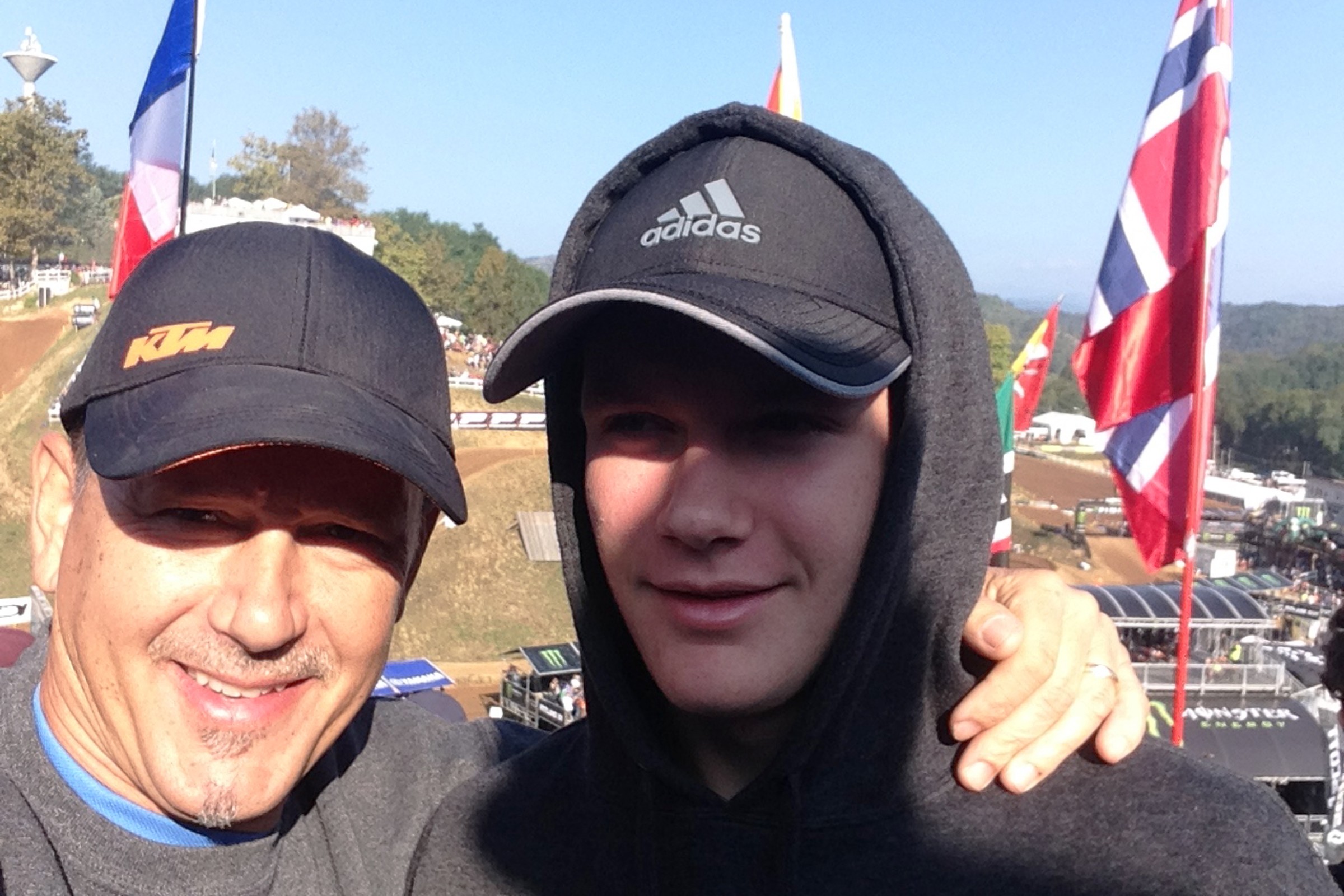 Tell Us a Story A Veteran's Race

The race is just under a month away, but we already know it will be the most epic motocross experience of all time. It’s coming October 6-7, 2018, when the Monster Energy FIM Motocross of Nations comes to RedBud. Combining this track with this event is an idea literally 60 years in the making. If you haven’t already been to a MXoN in person, you don’t know what you’re missing. We’re reaching out to you, the fans, to hear your stories of attending Motocross of Nations in the past. Email online@racerxonline.com with the subject line "MXoN Story" for a chance to be featured.

This week, a member of the U.S. Air Force travels with his sons to several MXoN events abroad and hopes for a win on his home turf this year.

My name is Ken Blount and I live in New Braunfels, Texas, and here is my story.

I have been blessed to see six Motocross of Nations so far, and they have all been overseas. Let me tell you—anyone, and I mean anyone, can see a race in the U.S., but to witness not just one, but six of them overseas is just incredible. The first was when I was an active-duty Air Force member assigned in England in 2005. My oldest son Kevin and I ventured off to see Team USA take on the world after several years of not racing after the horrendous 9/11 incident. Kevin and I set off to drive to the event, and as soon as we came off the ferry in France, my car quit running, and we had several more incidents where the car would stop running. We were finally helped out by a French stranger who took me to several places to get parts to repair my car. The man even offered us to stay at his home for the evening, but we were full-steam ahead to get to the races in Ernee, France, that Friday evening before qualifying on Saturday.

We arrived at the track and waited almost two hours in line to get to the camping area. Once in there, we were directed to a cornfield, where we proceeded to stomp down the corn stalks so we could pitch our tent at 2 a.m.

Just five hours later, we woke up to the sounds of dirt bikes practicing. As we got to the track, the first rider we spotted was Ricky Carmichael ripping around the large hills of Ernee. We had a great weekend of standing on the very steep slopes, and after a few scares—thanks to Kevin Windham’s locking front brake rotor—Team USA came away with the win. Des Nations number one in the books.

Kevin and I had to go to Matterly Basin, United Kingdom, in 2006 because I was still stationed in the U.K. and it was only a four-hour drive away. Again, the U.S. had a strong team and it was Stefan Everts’ last ride—who could miss that, and what a show he put on! I have never seen anyone ride a bike as fast as he could, going through ruts up to the axle and standing up. Amazing rider for sure. We saw another incredible race weekend and Team USA was two-for-two for us. A funny part of this story is that I had my diesel Ford F250, crew cab, four-wheel drive, long bed truck pulling a travel trailer we had rented from the Air Force base with us. Well, that weekend it rained so much that everyone in the car park and camping area was either stuck, getting pulled out by a tractor, or in the process of getting stuck. So, I put my truck in four-wheel high and made that American diesel sing as I motored through the center of the quagmire with hundreds of Brits watching in amazement! I pulled that trailer out to the higher grounds we were gone. Funniest thing ever!

After retiring from the Air Force and starting my second career as an AF civilian, my family and I went back to the U.K. for second stint. This time my middle son Chase and I headed to Teutschenthal, Germany, for the 2013 des Nations. From the U.K. we flew to Germany, rented a car and drove to Ramstein Air Base, where we rented everything to camp for the weekend. Four hours later, we were at the track for another great weekend of international racing. Again, I say you haven’t seen racing until you’ve seen it overseas. Well, the racing was awesome again, but we all know the outcome—Team USA didn’t win this time.

Because of international events, we sat out Latvia 2014 but were ready to go back to Ernee, France, in 2015 to hopefully have Chase see his first U.S. victory. We drove to Ernee this time with no car issues and camped at the track again. It’s always difficult to find a quiet area to camp with all the horns, chainsaws, and one-off crazy machines the Euros like to build and ride around the campsites with. Had another great racing experience, but Team USA didn’t win again—poor Chase was zero wins, two losses for his des Nations outcomes.

In 2016, we just had to go to Maggoria, Italy, for the 30-year anniversary of the famed Dream Team reunion. I introduced Chase to Johnny “O-Show” O’Mara and prepped my son on who he was and what he had accomplished in the motocross world. Johnny was great and talked to us like we were old friends; a very classy guy for sure. We surveyed the track and just imagined what it was like to spin laps around those very steep hills. What an incredible track it was! But before we even got to the event, I broke out with a mysterious rash all over my upper torso and arms and it looked like a serious poison ivy infection.

My wife was really worried that I would be put in a hospital in Italy because I was getting blood work done almost every day because the doctor couldn’t figure it out, and the bottom line is that she didn’t want me to go. Well, my arms and back of my neck were really bad with the rash, so I put on a sweatshirt to cover it all so I could get through customs going and coming. Needless to say, I was so uncomfortable the whole weekend, and of course the sun was out, baking me and making it even more uncomfortable. For the Sunday race, I found an umbrella in the place we were staying and took it to the race, only to find that when I opened it at the track, it had a pattern of little kittens on it—nice! Oh, and the results…three des Nations and Chase hadn’t seen Team USA win one yet, come on, fellas!

December 2017 and my family and I were leaving the U.K. and headed back to Texas, and guess what: one more des Nations at the beautiful Matterley Basin, U.K., circuit. This was my second des Nations there and Chase’s first at such an amazing track. This year we were confident the team was going to win, as we had met Thomas Covington and knew he had what it took (and by the way, what a super cool guy). We had typical English weather that year and it rained sideways, and you know the outcome of that race as well. I will never forget watching Cole Seely come around the corner with his rear fender dragging the rear tire, just gutted at that point, thinking, “Well, there goes the throwaway race.”  Well, when we saw Cole riding around his second race with the same scenario, it was the writing on the wall: Team USA was not going to win, and poor Chase has still seen zero U.S. victories in four attempts. I thought about asking Kevin if he wanted to go to RedBud this year since he is two-for-two in U.S. victories; I believe he is the lucky charm.

So that’s my story. I was able to see six des Nations races and all of them overseas. Very cool, and what an experience each race has brought. I have also been able to go watch the Isle of Man TT in 2016 and 2017 and already have reservations for 2019. I would like to thank the U.S. Air Force for providing my family and myself for so many great experiences throughout my 22-year career.

Get the Latest FROM Exhaust

Sign up for our newsletter and never miss the updates you love from our new site.