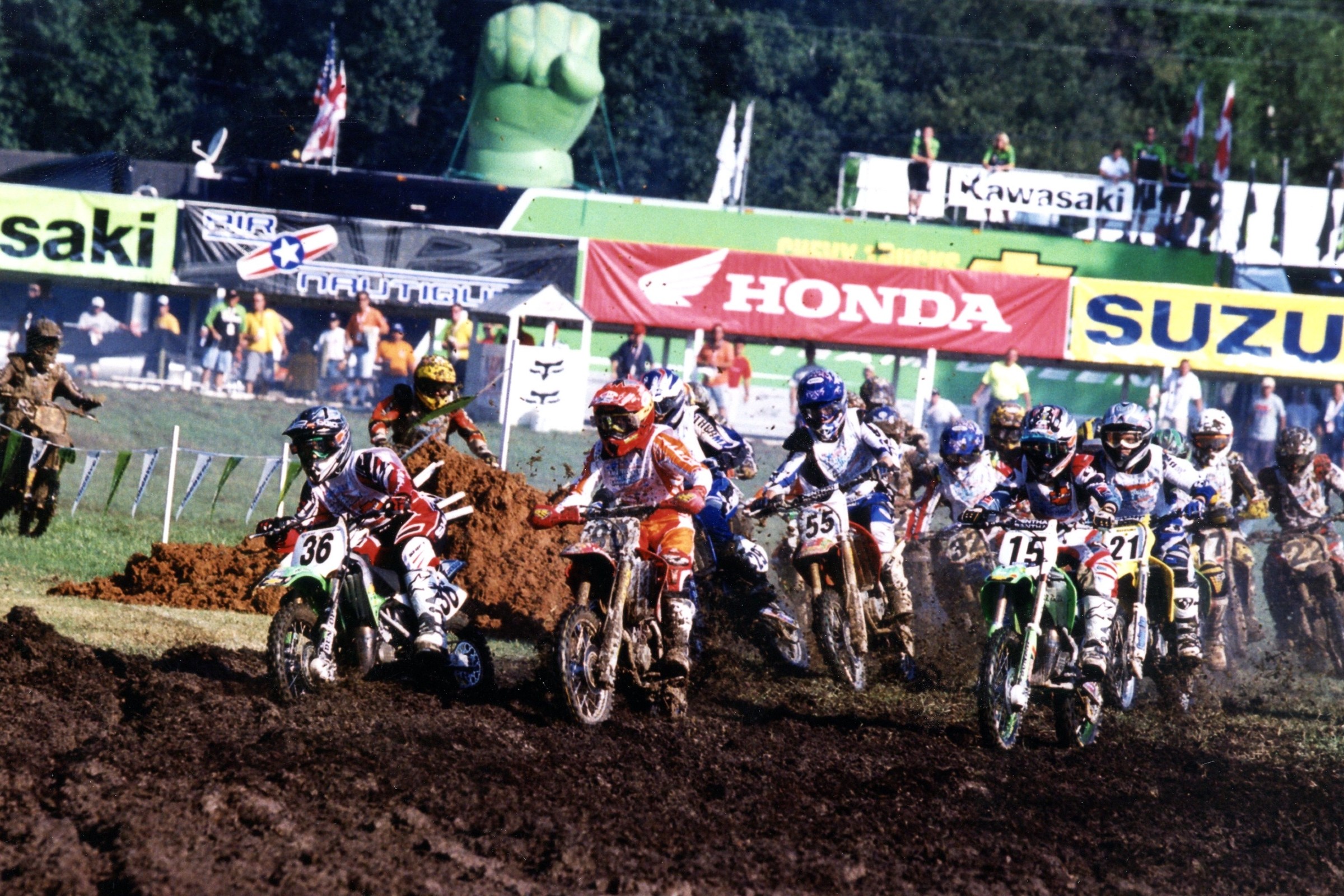 When the photos popped up on Sunday of Mike Alessi standing atop the podium, his baby daughter Rayna Lane Alessi on his arm, at this past weekend’s Canadian Motocross Nationals at Gopher Dunes, it brought out a lot of smiles and a little nostalgia for everyone at both Racer X magazine and next door at MX Sports. Alessi is no stranger to us, and we don’t have to think back too far to recall his seemingly countless titles as a kid at the AMA Amateur National Motocross Championship at Loretta Lynn Ranch. But it has been a minute since #800 rode with such vigor and fluidity, and it sure brought back the memories of this kid at Loretta Lynn’s, as well as the Lucas Oil AMA Pro Motocross Championship and Monster Energy AMA Supercross.

“It was an amazing day, to be honest—everything just really came together,” said Alessi of his win in Canada. “I felt great in practice, but then didn’t really get the holeshot in the first moto but was able to get in the lead by the third lap and just charged from there. I think I won by just over ten seconds.

Great day at the Dunes today!!! Track was rough as usually but so much fun!!! @gopherdunes never disappoints!!! Glad my baby girl was there to see me win!! Thanks to @gdrhonda @hondamotoca @foxracingcanada @smartopspacover for giving me the best bike out there!!

“Next time out I got the holeshot and when I came around at the end of the second lap my guys said I was close to ten seconds ahead already,” says Alessi. “I just kept charging the whole time and when I saw the pit board with three laps to go and it said +30, I was like, ‘Wow, I think it’s time to slow it down here, we don’t need to go full Ricky Carmichael status in this moto!’ So I backed down, got the win and it all just felt great, like the monkey off my back. It was just a special moment having my wife and daughter there, and getting to bring her up on the podium was just a next-level moment…

“The other cool thing is that my dad was able to take a redeye and get to Detroit at like one in the morning, then drive straight from there to the track and get there before the riders’ meeting,” added Mike of his father Tony. “He originally was not coming, but he said he had a feeling, so at the last minute he jumped on a plane and got there, so it was really special to have him there too. We embraced after the race and were just super-happy—it was a great father-son moment that will probably live forever for both of us.”

Of course, the Alessis shared a lot of success together at Loretta Lynn’s, going all the way back to 1995 when Mike won the first of his then-record 11 AMA Amateur National titles. That’s 24 years before Mike became a dad and was able to take his daughter up to the podium in Canada. His first title came in the 51cc (4-6) class when he rode a KTM to beat Ohio’s Zach Ames, Florida’s Ricky Renner, and his own younger brother Jeff Alessi. From there the titles would come year after year as he grew. Now he occupies some rarified air in the history of the event.

“It’s an honor to be tied with 11 titles with James Stewart and Adam Cianciarulo and just a huge accomplishment,” he says of the elite club of riders who won all 11 of their titles as youth and amateur riders on their respective ways to the pro ranks. “I’ve got that with me until I’m gone—the #1 plates are all still on my wall at my house—and just being in the same sentence as those guys is awesome. Every year that I went as a kid, I did all of the preparation and made all of the effort to win. I knew coming in that I had done all the work and all of the testing to get my bikes to where they needed to be, so when I got to the Ranch, I just knew I was going to win. There was no uncertainty or nervousness that I wasn’t. I came there ready to battle and to win, and more often than not that’s what I did.”

In his last five years at the ranch (2000-2004) Alessi competed in ten total classes and left with the championships. So out of all those titles, and all those motos, is there one stands out as his favorite?

“Well, if I really had to narrow it down, I would say it was 2003, the final moto of the 85cc (14-15) Mod class,” he offers, recalling a showdown with a Kawasaki Team Green kid named Ryan Villopoto. Alessi was riding a Honda CR80, and he had taken the measure of RV in each of the first two motos. “I didn’t get a very good start, which was rare, and Villo got a really good start, which was also very rare! I had to run him down, and I passed him, but then right afterwards I crashed going through the Ten Commandments. It was a weird kind of high-side crash, and I bent the bike and the bars all up. I don’t know what came over me, but I just dug really deep and I just told myself, ‘I am not going to lose this moto.’ I charged and charged and charged, ran Villopoto down again and passed him on the last lap. I won the moto and the title. It was just a never-say-die, never-give-up attitude, and that’s what will always stick out for me in that one moto. I had done the work, I was ready going in, and it all came together in that last moto that year. It was just really rewarding—that and jumping in the creek afterwards!”

When asked if we’re ever going to see Mike Alessi back at the Ranch, either as a vet rider or maybe as the parent of young WMXer, he quickly deflects and laughs, “No, not as a mini-bike dad, I can definitely say that I don’t think my daughter is ever going to race dirt bikes! In fact, I would like to keep her as far away from motorcycles as possible… But I did tell myself I would like to come back one day kind of like Ricky [Carmichael] did and ride the +25 class or something.”

If Alessi, nearly 32 years old, keeps riding like he did this past weekend in Canada, he might not be due back until he’s in the Senior +40 class—and you just know Flyin’ Mike Brown will still be there waiting for him!