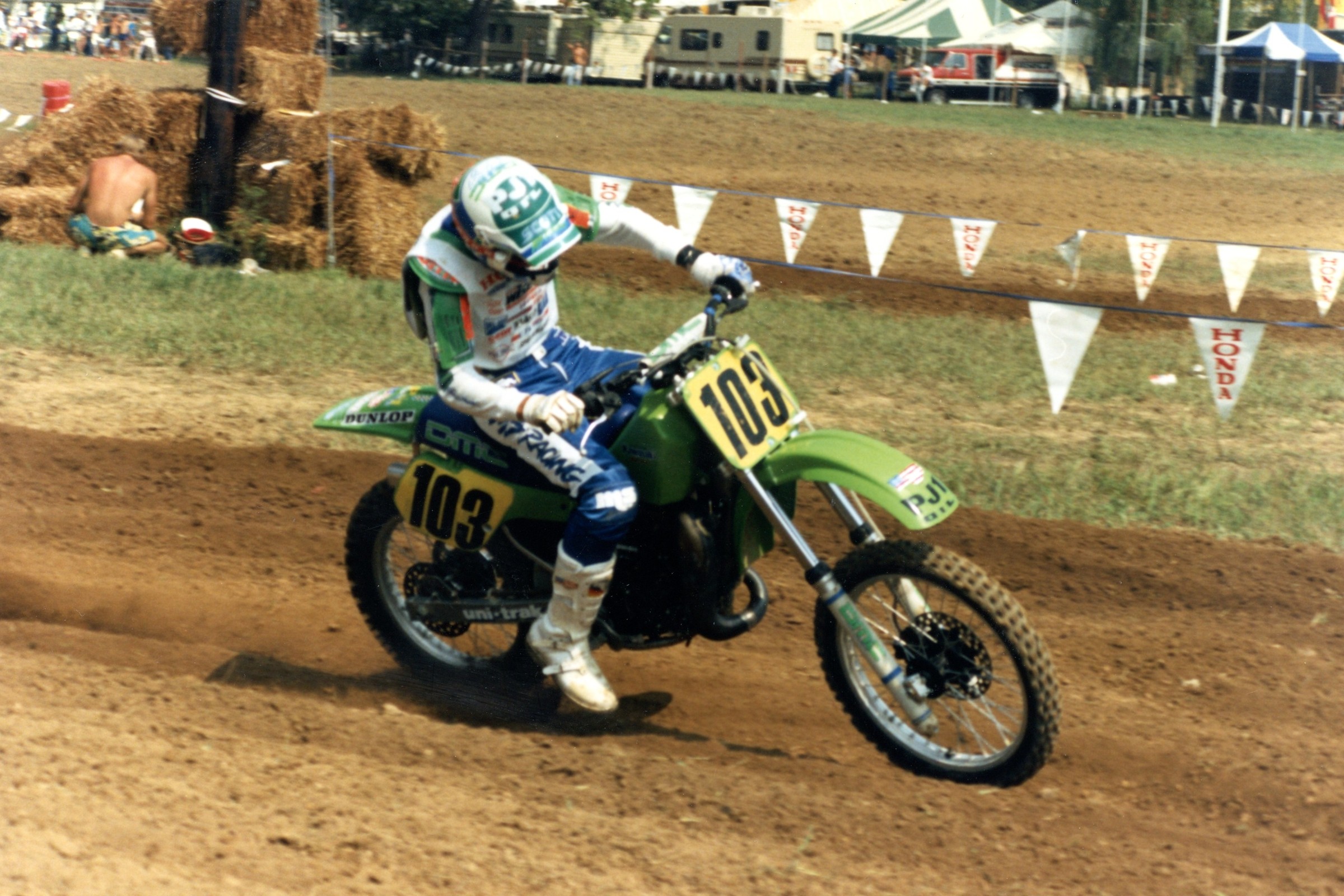 We tracked down Denny Stephenson and his squad as they were passing through Iowa, heading due north to Millville, Minnesota, and this weekend’s festively named Frescados Tortillas Spring Creek National. Stephenson, the former Suzuki factory racer and 125SX East Region Champion, remains as much a fan of the sport as he was as a kid growing up in Nebraska, so he’s always a pleasure to bench race with, and his Instagram account @dbo360 is a wild follow as well, which leads me to my first crack at humor with one of the funniest people I know: “Denny, please tell Eli I said hello!”

“I’m sure he will Instagram me later tonight,” laughed Denny in response.

Back in the mid-‘80s at Loretta Lynn Ranch, Stephenson had a pretty good run in the AMA Amateur National Motocross Championship, and in a very tough era for his classes. He raced for Kawasaki Team Green and he had quite a few decent finishes.

It all really started coming together in 1986 when he swept all six of his motos in the 125 Schoolboy (12-15) Stock and Modified classes.

“But that year really wasn’t that memorable for me—any one given moto—because things were just really clicking for me. I think I holeshot every moto and led every lap, for all six motos! By that time I had already been there for three or four years, and I got close to winning a couple of mini classes, but then when it just clicks like it did in ’86, it just all seems so easy.

“So that’s why most memorable moto was probably in 1988,” he quickly diverted, changing lines like a fast kid with a bad start in early traffic. “Last 250 A Modified moto. I was tied in points with Mike Kiedrowski—I had a 3-2 after two motos and he had a 4-1—so it all came down to that last moto.” Whichever the two [of us] finished ahead of the other was going to win the championship.

“I think often about those clutch moments when you’re a teenager and you’re racing, and you just really have to step up for the moment. Everyone who’s grown up racing a dirt bike knows what I mean. You realize your family has put everything on the line, your sponsors have done all they can for you, and it just comes down to you—you’re the one on the bike and on the starting gate and you have that one moment to either rise to the challenge or fold.”

“I did it,” he said looking back at the moment now, pride still showing after all these years. “I went out and I beat one of the best of all time. It was just a turning moment in my head and I felt like, ‘Hey, I kind of belong up here with these guys.’ It wasn’t a dominant performance by any means, but I just rose to the occasion and made it happen for myself, my family, my sponsors. It was a big deal for us.”

From there Denny would go on to be a Suzuki factory rider as a professional, his father Don going along as his mechanic, and enjoyed a lot of success at the pro level (including his 1990 125 East Region Supercross Championship). He points back to his early years at Loretta Lynn’s and the things he learned along the way, win or lose.

“Everyone goes in the right class, head-to-head with the best in your class. There are three long, and usually hot, motos, and there’s no lucking out and getting a championship, you have to earn it.”

And no year was tougher than 1988, when the rosters included not only Kiedrowski, Lamson and Stephenson, but Damon Bradshaw and Larry Ward, both of whom would battle with Kiedrowski for the 1989 AMA 125 National Championship, as well as Buddy Antunez, Brian Swink, Mike Brown, Tallon Vohland, Jeff Dement, Tim Ferry, Robbie Reynard, Jeff Emig, John Kitsch, Jeromy Buehl, Ryan Hughes, Jimmy Button, Gene Naumec, Keith Johnson, Brock Sellards, Kevin Windham, and many, many more.

After spending the ‘90s racing professionally, Denny Stephenson retired. And then after a few years at home, he loaded the family truckster up in 2006 and came back to Loretta Lynn’s to race the Vet class.

“It was a blast,” he said. “When we rolled in over the hill and you see the pool and you see the tower and you see the track, you get butterflies. It was just such a big part of my family’s life as we were growing up. The people we got to see again, sharing it all with my son, and him down there playing in the creek, it was just a lot of fun.

“After the second moto, which was all muddy because of course it’s going to rain down there at least one day, Fro [Jeff Emig] and RC and Windham all came over to the impound area after the podium, and Kevin goes, ‘What the hell are you doing back here?’ I was like, ‘I have no idea but I am having fun!’ That’s the thing about dirt bikes—it’s what we love, it’s what we do, and to be able to go back and share that with your family as an old guy, that’s just really special.”