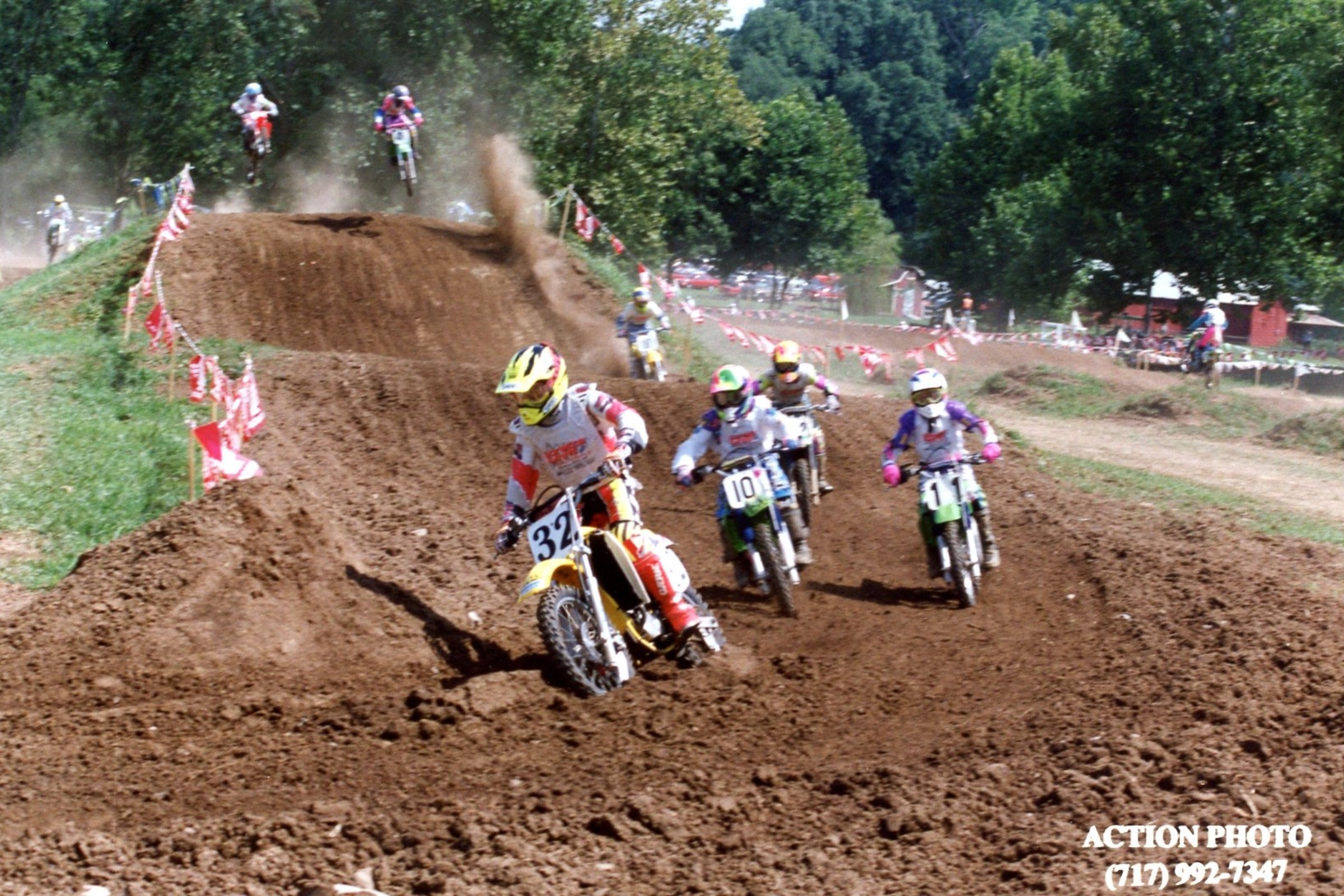 As soon as ten-time AMA Amateur National Champion Ricky Carmichael was asked about his favorite moto from Loretta Lynn’s, he answered, “Well this one may not have been my best moto, and certainly not my favorite, but it’s the one I will never forget!”

Then the 15-time AMA Supercross and Pro Motocross Champion turns the time machine all the way back to 1992 and a crazy week of minicycle racing at Loretta Lynn’s Ranch in Hurricane Mills, Tennessee.

“We were on 80s that year and it was myself and Charley Bogard,” he begins, and the very mention of his nemesis from Texas’ name lets you know where this is head. “We were in the 9-to-13-year-old classes and this was the year that I feel like Charley really established himself, so we had a little rivalry going. He was the Suzuki rider and I was one of the Team Green kids, along with [Kevin] Windham, [Robbie] Reynard, Brock [Sellards], Nick Wey, Timmy [Ferry], and a bunch more.

“This was the second moto of the week for us, and I had actually DNF’d the first,” continued the future GOAT. “Brock won and Charley got second. But in the second moto I was battling Bogard and we came around to where they used to have all those doubles after the finish line. We were doubling through there, side by side, and we end up bumping together and he goes down. My initial reaction was, ‘Holy cow!’ And I almost fell myself. Then I just looked ahead, tried to regroup and get going again. We had been battling the whole moto and now I was just kind of by myself. I was thinking, It sucks that he fell, but better that it wasn’t me, so I’m thinking I will have an easy win.

“So about two laps go by, and he was laying there on the track a little. But he gets up and rides into the mechanic’s area, I guess, and then he starts just riding around. As I’m racing, I can see him just riding around the track really slow. I didn’t really think anything of it.

“We were going back towards the trees near where the water trucks sit in the back towards the stables Loretta used to have back there,” explained Carmichael. “I was going down a straight towards this tree we went around, and I pass Bogard as he’s riding down the left-hand side of the track. And then just as I’m approaching this hairpin left-handed corner, dude, all of the sudden his bike is all up on me, he’s like side-saddling it from what I can remember, and then he ghost-rides his bike in to me! At the time I’m thinking, ‘What the hell is this dude doing?’”

Back in 1992 I was actually the Cycle News reporter for the Loretta Lynn’s race, and I interviewed a 12-year-old Ricky Carmichael about what exactly happened in the second 85cc (9-13) Modified moto between himself and Charley Bogard. Here’s how “Little Ricky” explained it all way back then:

“I got out of control after the tunnel jump and ran into Bogard and he fell. Then I guess he decided to wait a lap for me to come around and he just took me out!”

Turns out Bogard had been told by whoever was pit-boarding him from the signaling area to avenge his crash, which he did. Then officials disqualified Charley Bogard from the class.

“Luckily I ended up not falling down, but I did end up getting beat by Brock in that moto, and he actually ended winning that class,” recalls Carmichael. “I don’t think I even rode the last moto. I beat Charley in our other class together but it’s that moto in the middle I will never forget!”

And then way down at the bottom you see this:

“It was crazy,  but that’s my most memorable moto from Loretta Lynn’s—not even my first title there in 1990, or my last one as an amateur in ‘96—but definitely that one with Charley,” said Ricky all these years later. “We hated each other, without a doubt, but man could he ride a mini-bike.”