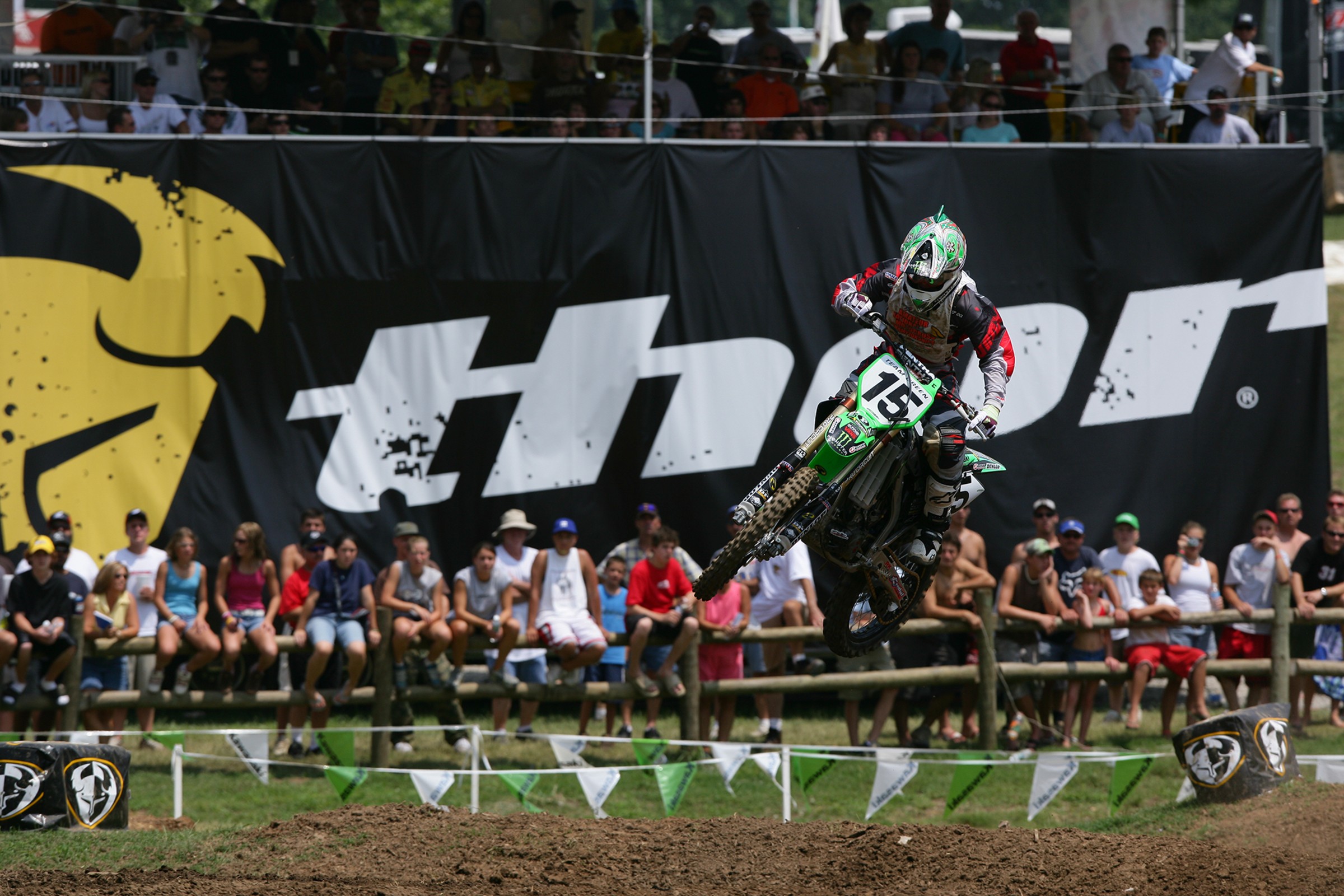 In order to count down the days until the start of the 2019 Rocky Mountain ATV/MC AMA Amateur National Motocross Championship at Loretta Lynn Ranch, we’re asking some of the top graduates from yesteryear to tell us about their favorite moto from the Ranch. Since the race was founded in 1982, we’ve got a bunch of fast folks to choose from. We decided to start with someone you might know…

It’s hard to believe that back in early August of 2005, Poulsbo, Washington’s Ryan Villopoto, future multi-time AMA Supercross/Pro Motocross Champion, was working on what would be his first and last AMA Amateur National Championship at Loretta Lynn Ranch. Villopoto was a Kawasaki Team Green rider whose time as an amateur was largely spent in the shadows of first Mike Alessi and, at least in 2005, the already-notorious Jason Lawrence.

“J-Law was already like my nemesis and I just wanted to beat him so bad,” recalls Villopoto nearly 15 years later. “He was riding the 125 A/Pro Sport class, which was the only class we shared together that year.”

Lawrence had something of a head start on RV in that the Suzuki rider took advantage of the rule that allowed amateurs to use a Pro-Am license to do a few outdoor nationals, and the Cernic’s Racing Suzuki-backed Lawrence was a steady top-ten finisher. J-Law was ready for Villopoto when it came to their motos at the ranch, and he swept all three motos in their match-up.

“All three motos were not very good for me,” recalls Villopoto, who would go a frustrating 2-2-7 and end up fourth overall behind Lawrence, Florida’s Kyle Chisholm, and Ecuadorian ride Martin Davalos. “In that last moto I think I had banners in my rear wheel, so that didn’t go well at all.”

The 125 A motos went a little differently, and Villopoto swept all three motos to win his one and only Loretta Lynn’s title.

“I remember thinking after that last moto, I finally got there," recalls Villopoto, who was 16 years old at the time. “I think Jake Weimer was second and Martin (Davalos) was third. But it was kind of a bitter-sweet moment because it was my very first title at Loretta Lynn’s, but it wasn’t even in the premier class because Jason didn’t race that class, so we were missing a heavy-hitter, and that was my last chance to beat him as an amateur. So losing to Lawrence was more of a disappointment than the happy feelings I had from winning.

“That last 125 A win was my favorite moto, but I remember getting beat by Jason Lawrence more!”

RV would soon avenge himself as a professional, going from the Ranch into the 125 Nationals, where he joined Mitch Payton’s Monster Energy/Pro Circuit Kawasaki team for the Broome-Tioga National in New York, where he wound up 15th in his debut, then finished fifth in just his second-ever outdoor national at Steel City in Pennsylvania. His third try was the season-finale at Glen Helen, where Villopoto finished second overall, while Lawrence finished 15th.

From that last year at Loretta’s, Ryan remembers a couple of other things, including the evening entertainment one night at the pavilion.

“They had Vanilla Ice come and do a big concert, but I didn’t go,” he laughs, “I spent most of my time down by the creek, swimming or fishing.”

Within a year of that last amateur race, Ryan Villopoto was the AMA 125 Pro Motocross Champion. A decade later he retired as one of the all-time greats. But he’s coming back to Loretta Lynn’s again for 2019.

“I’m pulling in Wednesday evening and then going straight to Mitch’s [Payton, team owner] tent to drink some beer and do some bench racing,” says RV. “Then I plan on watching racing all day Thursday and then doing the Yamaha team dinner that night. I can’t wait to get back to the ranch.”

When asked if he had any advice for everyone competing in 2019, Villopoto says, “It’s a really fun, weeklong deal, and there’s lot to do, but you only have three motos per class, so you need to make the most of them,” he says. “Everyone has to remember that sometimes things don’t go your way and getting beat can be a hard thing to swallow, but there’s always another race. It’s a big deal, but it’s not the end-all. Trust me on that—I only won there once!”