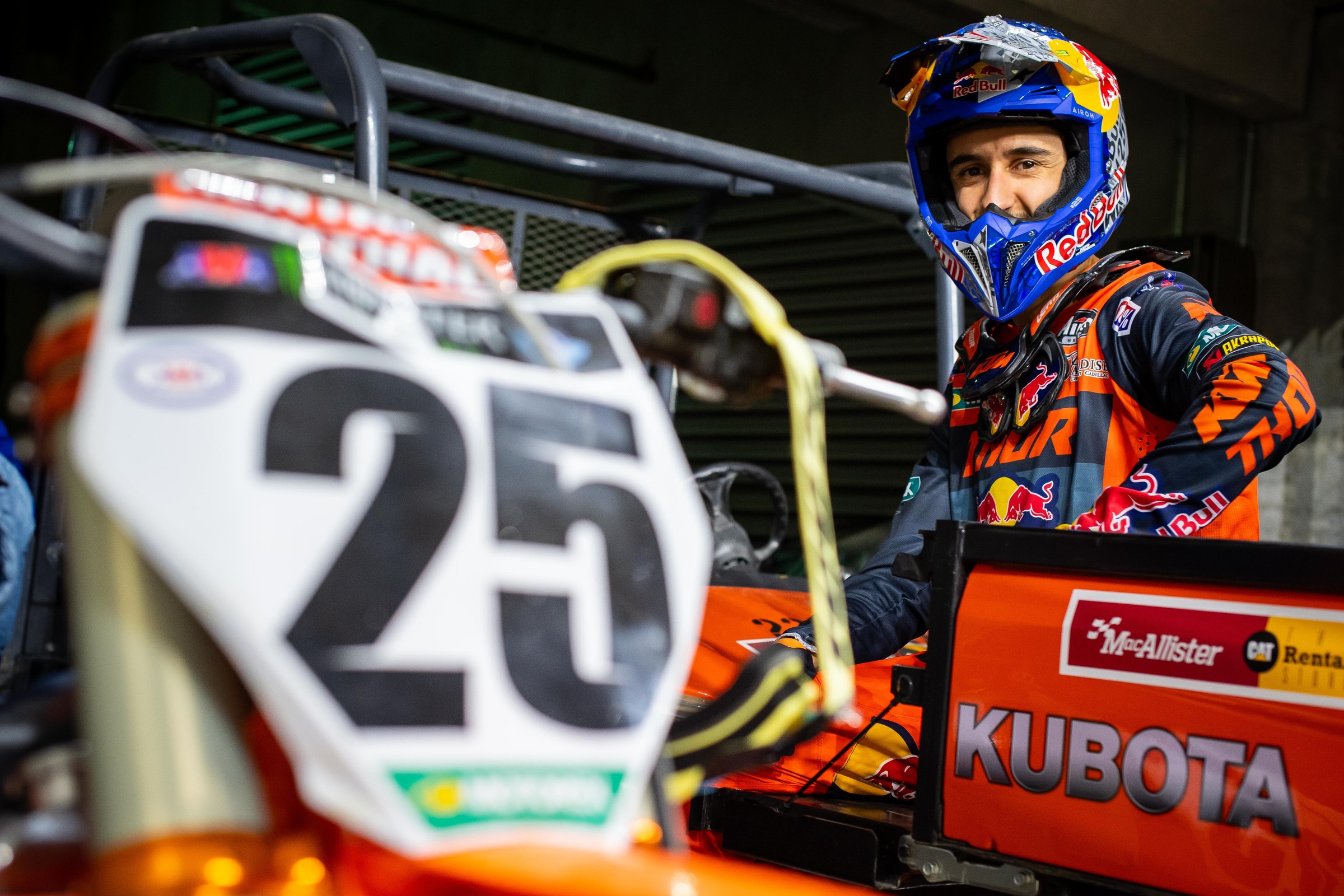 The law of averages says Marvin Musquin can’t end up at the back of the pack on the first lap of every race, but, it does keep happening. Musquin got caught in a pileup on lap one and found himself up and circulating in dead last. He was also last on the first lap of the previous race! Marvin was very fast in Indy, keeping heat on Adam Cianciarulo in his heat race, and moving from 22nd to eighth at one point in the main before going down again. Marvin grabbed a podium at round one, and has been mired in trouble since. Again, his luck has to turn eventually, right? -Jason Weigandt

Riders always say they can’t let the highs get too high or the lows get too low. Check out Christian Craig’s last 14 days or so to see why. After round one he was the feel-good story, bouncing back from career doldrums and more by winning his first race with his new team. Lots of fans on the CC wagon that night, plus, he established himself as an early title favorite. Just two Saturdays later, and he’s trying to cling to second place against a fast-charging Jett Lawrence. Craig’s defense goes all wrong, which puts them both off the track, costing them podiums, and also drawing some ire since Lawrence is quickly becoming a fan favorite. Craig needs a big race on Tuesday to reverse this course of momentum, both on and off the track. - Weigandt

Never been much doubt of Adam Cianciarulo’s speed, and he cemented that with plenty of fast laps in his rookie 450 season last year. All anyone asks now is for Adam to harness that speed with some consistency in year two. Guess what? He’s doing it. Okay, he crashed back to 12th at round two while going Mach 4 with Chase Sexton. Besides that, he’s had two fourths and a third, and while he hasn’t been the fastest rider on the track, he’s taking the results as they come, instead of yard sailing it trying to win. With this level of progression, someday Adam might marry the one-lap speed and race-long consistency together. That’s when the wins start coming—but for now, more solid results should be on schedule. -Weigandt

Some riders said the dirt was drier and harder than usual for Indianapolis. Well, that might have been true, but today’s bikes can still dug mega ruts anyway, so Indy was a rugged rut-fest by the main event. Combine those ruts with some tight, steep transitions in the rhythm lanes and you had a technical evening of racing. The dirt will likely be similar at the second Indy—it might be a little harder at the base of the transitions, but overall it will still get rutted. If the track layout stays technical, it’s going to be a long night and a test of patience for the pack. Who has the patience to avoid the big mistake? -Weigandt

Lots of Indianapolis Colts’ blue sprinkled around Lucas Oil Stadium. Yamaha would certainly like to add some more with a 450 podium via Monster Energy/Star Yamaha Racing. The team’s trio of riders (Dylan Ferrandis, Malcolm Stewart and Aaron Plessinger) have been solid, but outside of Ferrandis’ scintillating round two ride for second, the breakouts haven’t happened. These are capable riders, especially in rugged track conditions like this. Can one or more of them make it to the box? -Weigandt

So far this season we’ve had four different winners in four different 450SX races—Justin Barcia, Eli Tomac, Cooper Webb, and Ken Roczen. There are still plenty of riders who are capable of getting it done in 2021, too. Marvin Musquin, Jason Anderson, and Zach Osborne are all past 450SX winners, and, as mentioned above, it’s only a matter of time before Adam Cianciarulo puts it together. So far this season has been anything but predictable, and it wouldn’t be surprising at all if we had our fifth winner in as many rounds at Indy 2. –Aaron Hansel

After the first three rounds, in which Zach Osborne went 10,10,9, he mentioned a need to work on his starts. Well, you can work on your start technique all you want during the week, but it doesn’t mean much when you get stuck in the gate, like Osborne did on Saturday night. Funny thing is, his worst start of the season ended up with his best result, a fifth! Clearly, Osborne was running hot on Saturday night. If he’s able to pair that speed with even a half-decent start, expect him to have his best result of the season at Indy 2. –Hansel

If you’re a Michael Mosiman fan you’ve got to be thrilled with how round four played out for the Troy Lee Designs/Red Bull/GasGas Factory Racing rider. Mosiman won his heat after putting Jett Lawrence in the dirt—payback for Lawrence’ takeout move on Mosiman one week prior—and went on to score second place, a career best in supercross for Mosiman. Yes, he was gifted two spots on the final lap due to Christian Craig blocking Lawrence and taking them both off the track, but afterward Mosiman remarked that, after seeing the lead pace, he felt he could match it. If he’s able to pick his way through lapped traffic a little better he just might end up on the podium again. –Hansel

Making a Break For It

Is exactly what Colt Nichols is doing right now. The Monster Energy/Star Yamaha Racing rider clicked off his second consecutive win on Saturday night and he looked fantastic doing it. Nichols led all 20 laps of the 250SX main completely unchallenged, setting the fastest lap of the race in the process. He’s now the sole points leader (he and Craig were tied coming into Indy 1), and thanks to Craig going down on the final lap, which shuffled him back to fifth, Nichols has an eight-point cushion. Considering how strong he’s been in the first four rounds, it’s tough to see anyone derailing the Nichols Express anytime soon. –Hansel

Thanks to a 13-point deficit to Nichols following his fourth-place finish at Indy 1, Lawrence now finds himself in a situation in which he cannot afford to do anything but win every race from here on out. Lawrence has five races left in which to chip away at Nichols’ lead, but given how solid Nichols has been in 2021, it’s tough to think Lawrence is going to beat him at every remaining round, especially considering he’s only beat him once so far this season. We’ll see if Lawrence can start clawing his way back into realistic contention on Tuesday night. -Hansel