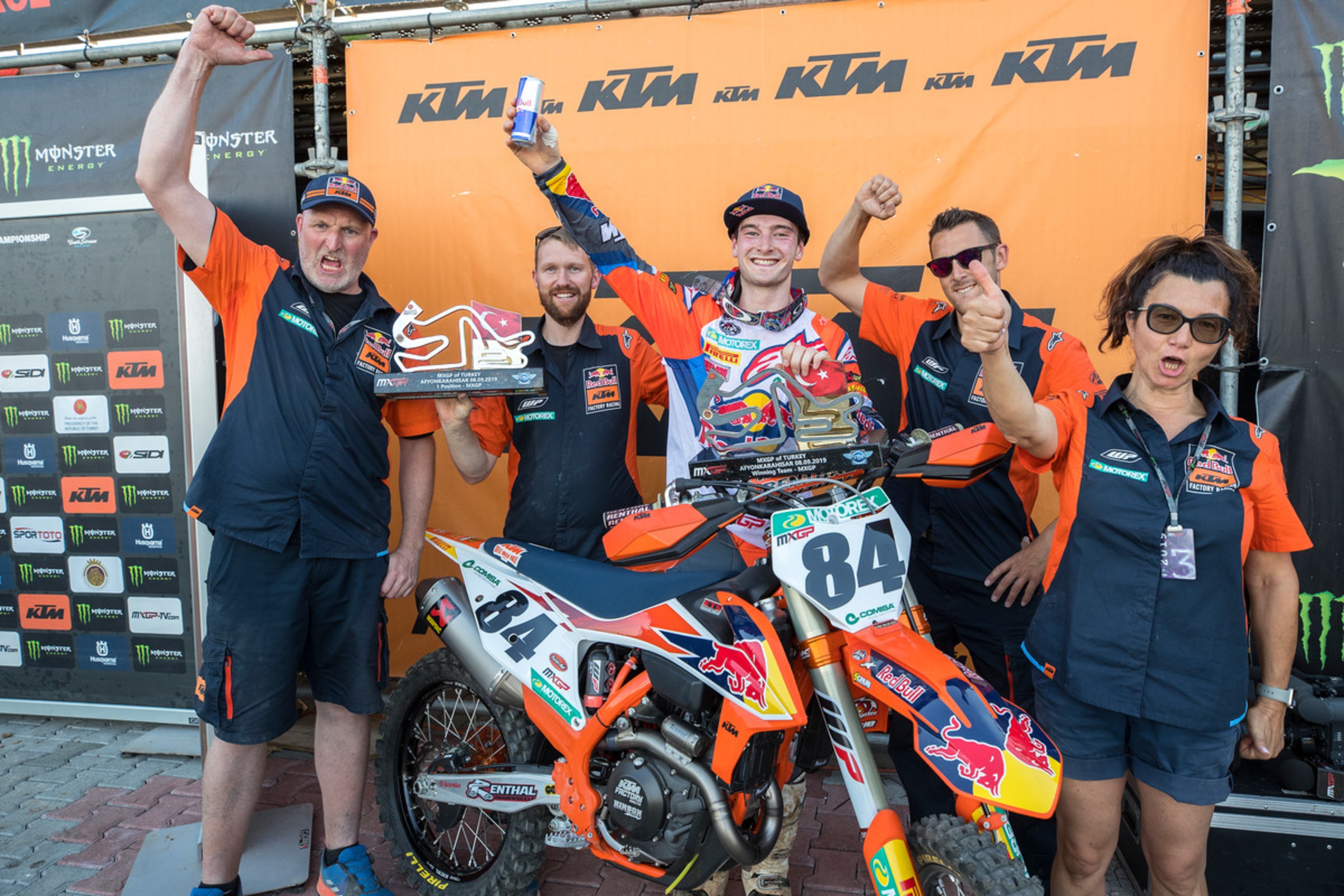 GP Report Five Observations From the MXGP of Turkey

Red Bull KTM finally come back to haunt both classes of the FIM World Championship at an eye-catching Grand Prix of Turkey, round 17 (of 18) as the series hurries to a conclusion.

1. Beware the Dutch as Herlings slips into old groove

Afyon remains a Jeffrey Herlings domain. The far-flung but wide, quick, modern, technical circuit returned to the MXGP calendar for the second year and found a rampaging Dutchman again in imperious form for what was the 17th and penultimate fixture of 2019. Having gone 1-1 in ‘18, Herlings repeated the feat in just his second full Grand Prix appearance, and was able to watch some of the painful memories of a broken right foot and right ankle ebb away with the champagne down the sides of the MXGP podium.

Still chasing race-fitness and form and with only the prospect of his homeland hosting the the Monster Energy FIM Motocross of Nations glory on the horizon in three weeks time, Herlings was a step closer to the mark compared to his comeback in Sweden a fortnight ago. He held onto the first race after denying Rockstar Energy IceOne Husqvarna Pauls Jonass (the Latvian exercising his own demons in Turkey with a third overall finish: a collision with Jorge Prado at Afyon 12 months ago and a subsequent knee injury spelt the end of his MX2 title defence and seriously affected his winter preparation for a rookie MXGP season) and then pursued KTM brandmate, buddy and Team Netherlands teammate Glenn Coldenhoff in the second moto. Herlings made his inevitable move on the last lap and had his 1-1, ensuring a streak of at least one Grand Prix triumph every year since he debuted in the FIM Motocross World Championship as a 15-year-old in 2010 and now has a total of 85; all with Red Bull KTM.

In the bigger picture of the championship, Herlings is starting to fire on all cylinders when the majority of his peers are either feeling the wear of a full term or are seeing-out the calendar. World Champion Tim Gajser crashed his factory HRC machine in both motos in a rare display of miscalculation by the Slovenian. It was a painful birthday for the newly-turned 23 year old who still managed fourth overall with a 6-3. Monster Energy Yamaha Factory MXGP's Jeremy Seewer, also falling in the second moto, is all but confirmed as runner-up for the year unless Gautier Paulin—lacking good starts in Turkey—finds 43 points over the Swiss next weekend. Paulin and Coldenhoff will be the keenest competitors in China: the dispute for the bronze medal for the year involves a mere 11 points between the pair.

Afyon seemed to benefit from a better degree of track preparation for its second world championship bow with a relentless trail of ruts and bumpy sections that mixed hard throttle action with a hefty degree of measure. It was still a heavy variant on what many will find in the sand of Assen for the 73rd Nations and that’s why the Dutch quartet of Herlings, Coldenhoff, Calvin Vlaanderen, and Roan Van De Moosdijk have to be feared.

Coldenhoff is the in-form rider of MXGP, and is close to a best-ever championship finish if he can leapfrog Paulin. He was usurped by Herlings in Turkey but still posted his fourth consecutive podium. He now has third, first, first, and second overall finishes in the last four rounds, and has not recorded better results in his career to-date. It is highly possible that the dispute for the second moto win in Afyon is played out again in front of the vast grandstand at Assen. And then there’s MX2. Van de Moosdijk’s second GP outing this year resulted in third overall for the European Champion and proved that the F&H Kawasaki racer can more than match the pace of the best in the class. Vlaanderen was also among the leaders in Turkey, which means the Dutch can rub their hands at the prospect of defeating the reigning champions. Speaking of which…

The build-up to the 2019 Motocross of Nations has seen Team France make headline news and dominate internet chatter for—arguably—the wrong reasons again. The Red Bull KTM/FFM mess over cap space (cap space!) and the eviction of Tom Vialle—an 18-year-old MX2 rookie who is poised to take the battle for third position in the MX2 championship to the last moto in Shanghai—has invited sizeable criticism and conjecture.

Vialle had to forget the mini maelstrom in Turkey but was pushed-and-pulled by a stark reminder as his replacement, Yamaha SM Action’s Maxime Renaux, took the challenge to the KTM man in the first moto. Vialle toiled from third back to eighth and claimed a lack of feeling and confidence. But his rapier start was in place for the second moto, and he improved to follow world champion and teammate Jorge Prado to the checkered flag.

Renaux, for his part, was spectacular and receives full marks for the gusto in how he attacked the ruts on the YZ250F. A 4-4 meant he narrowly missed out on another podium. The French are fortunate to be able to discard a blossoming rider like Vialle and acquire another that is blooming like Renaux. With Romain Febvre’s replacement, Jordi Tixier, making the overall top ten in MXGP then the Chamberlain Cup holders could well best poised to dilute some of the orange.

Two weeks ago in Sweden, Jorge Prado mixed 95 percent exultation with five percent frustration. The Spaniard made sure of his second world championship but conceded an overall race victory for the first time in 2019 by three-tenths of a second. In Turkey, Prado was free of distraction.

The Red Bull KTM man was a perfect match to the Afyon dirt and made MX2 a non-contest for the 15th time this year, taking his tally of 1-1s up to a staggering 13.

The 18-year-old had the motivation to resume business as usual on the KTM 250 SX-F (nailing two more holeshots for a baffling 22 of 32 motos) but perhaps not the best preparation. Time after Sweden had been spent on the media trail but also taking his very first laps on the 450 SX-F for his debut on the larger machine at Assen.

“I rode it for a couple of days and it actually helped me this weekend because I found the 250 way-easier to ride and re-adapt,” he admitted. “I felt comfortable. With the 450 you need a bit more power [strength] in places. I’m looking forward to getting back on the big bike.”

There is not a single person inside KTM or around Prado that believes the two-time champion will have any issues acclimatising to the 450. If his record at Assen is taken into consideration, then it means he is the darkest horse outside of Team Netherlands for individual honours at this year’s contest. Prado finished on the podium across the Dutch sand on what was his full MX2 debut in 2016. He won in 2017 (2-1) and 2018 (1-1). Put your bets on now.

Jeremy Seewer, Maxime Renaux, and Tim Gajser were just some of the tumbling riders to avoid injury in Afyon but this was still a tense weekend for MXoN Team Managers, staff, and campaigns ahead of the biggest race of the year. Turkey and the GP classifications was missing some notable athletes, and the absence helped chisel the world championship standings into a degree of formality.

German Henry Jacobi was already sidelined with a season-ending knee injury, confirmed MX2 runner-up Thomas Kjer Olsen was knocked out of the race with a debilitating bout of food poisoning (but the Dane should recover fully to join his brother Stefan at Assen) and Tommy Searle looks to have ruled out a late and surprise Team GBR appearance with a crash in warm-up that apparently has led to a shoulder injury. The Kawasaki racer’s misfortune could open the door to Red Bull KTM Enduro racer and former MXGP rider (still just 25) Nathan Watson—brother of MX2 star Ben—who is renowned for his speed in the sand. The Brits have perhaps been the most unfortunate after their strongest line-up was wrecked in a period of 24 hours last month in Italy.

Back in Turkey and in MX2 a revived Monster Energy Kemea Yamaha’s Jago Geerts was second overall after an off weekend in Sweden, and the 38 points helped towards a narrow advantage of 10 over Vialle in the championship: that will be a battle to watch in China.

“It’s still pretty close for me and Vialle. We’ll see where I end up,” said Geerts, who remains Belgium’s brightest hope for Assen, although respect must go to the oldest and most experience rider in Grand Prix—JWR Yamaha’s Kevin Strijbos—who managed ninth overall just behind the third ‘red’ Jeremy Van Horebeek: the most consistent nation in the contest could forge a surprise on their neighbour’s soil. Olsen is already safe with the number two plate for MX2 2020 and Jacobi, in fifth, cannot be caught by F&H Kawasaki teammate Adam Sterry.

Team Italy will miss the talismanic Tony Cairoli but the trip to Turkey showed that the ‘Azzurri’ collective can look to the future with some optimism. EMX250 racer Alberto Forato rode to an eighth-place finish and was just two positions in front of 2019 EMX125 European and 125cc World Champion Mattia Guadagnini making his debut in Grand Prix.

5. MXGP into the unknown for the last

Afyon is on the eastern frontier of Europe and causes many teams to treat the event as a flyaway (especially with the season-ending and postponed Grand Prix of China following hard upon) but it is put together with a level of support and fanfare that would put many other European rounds to shame. The circuit continues to develop and evolve and is worthy world championship standard while the proactivity of the organisers and local town is entirely laudable (the race was wrapped around a music festival this time).

What MXGP will discover this week and for the very first Grand Prix of China is something of a mystery. The procedure for visas and entry to the country has been arduous and comprehensive for the paddock staff that will make the long trip to Shanghai and then to the Fengxian district where the (apparently sandy) track is based. The site was heavily affected by rain that forced the race to be shifted towards the tail end of the calendar and where the entry list is bound to feel the limitations of a long and pricey flyaway as a curtain-closer.

If the event can gather the same kind of reach and appeal as the rounds in Indonesia, then signs could be promising. Fengxian is a suburban zone on the southern coastline of the metropolis, surrounded by beaches and golf courses. It will be curious to see what kind of audience for the sport can be found on the fringes of one of the most populated cities in the world.