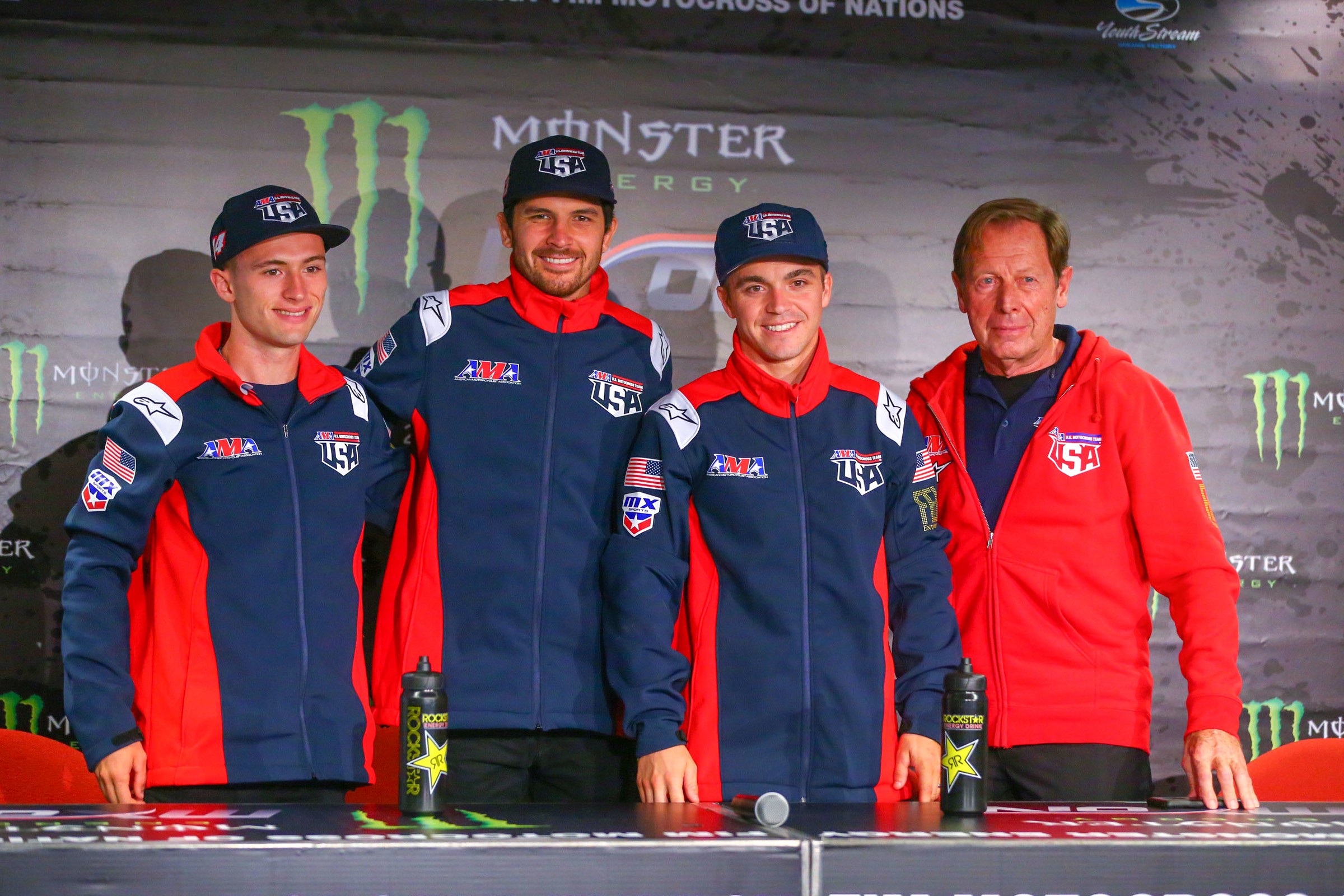 As always, Roger De Coster led Team USA into action at the Monster Energy FIM Motocross of Nations yet again over the weekend and, also as always, he had more candid thoughts to offer up once the final scores were tallied up. The United States finished sixth overall, despite a first-lap crash that left Justin Cooper with a hand injury (and missing clutch lever and hand guards) and Team USA teammate Jason Anderson on the ground. That hurt, but De Coster believes the team can take positives from a day of sand surfing beneath rain clouds. MX Vice, one of the premier destinations for moto content in Europe, caught up to De Coster after the race.

You can also check out MXVice.com’s interview with Justin Cooper and Zach Osborne.

MX Vice: Again, it was not the result that Team USA wanted or deserved. Last year I think we left RedBud saying, "What happened?" This time I think we are leaving here just saying it was bad luck and I guess you'll get them next year.
Roger De Coster: Yeah. I really am happy and thankful for many things. The effort from the riders by coming in early, working hard for it and being positive. Then for all the help we got from the Europeans, from especially the IceOne team and also the Yamaha team that helped [Justin] Cooper. It's bad that a crash that happened in the first few corners of the first moto took out Cooper and [Jason] Anderson together. Then Cooper's hand was pretty badly injured.

He showed a lot of toughness by wanting to race the second race after finishing that first race with no clutch and a badly hurt hand. It sounds like it's becoming a tradition for us to do bad, but I really feel that there was a big change in attitude and positiveness with the team. We are not going to give up. I think podium was… Third place, I think we deserved it today. It was realistic. We did not get it but there will be next year.

Was there a point between motos one and two where Cooper was not even going to ride? Was he always saying that he just had to go out there and do it for the team?
No. When I saw how bad it was swollen and all that—and the doctor said that he thought maybe a couple of fingers were broken—I suggested to him that it was okay to not race. I knew… By then we all knew that winning and being on the podium would be very unlikely. I did not want him to damage his hand more for a result that was not going to be very good anyhow. They took X-rays and the bones were not broken. They were badly bruised. He wanted to race. He didn't want to quit. I'm really thankful for his attitude and for the effort he put in.

I guess all of this bad luck just makes it even more unbelievable how well everything went from 2005 to 2011. The bad luck hit all of the other teams. You constantly seemed to avoid these weird first-lap crashes. Now though, you cannot get away from them.
Yeah. By doing the ‘Nations this late, we are looking for this kind of weather. I think it's time that if we are going to do a ‘Nations this late in the season, then we have to go to the south in a country where we don't have pretty much guaranteed bad weather.

What did you think of holding the event at this venue? It's very different to RedBud, Matterley or Ernee. It's something different, but what did you make of it?
I'm not a fan of artificial tracks. It's great for the infrastructure, for the paddock and the facility. That's great, but for motocross I like elevation changes and a more natural course. Even if it is a sand course, I'm okay with it, but I like it to be basically an outdoor course. That's my opinion.

Did the testing that Zach Osborne and Jason Anderson did before this race work? After practice and the qualifying races Saturday, did they overhaul the bikes completely and just change everything?
No. It helped and I'm sure that they learned from the time they spent on the sand track, but then conditions changed completely today with all of the water. I don't see it as a negative that we came in early. I think it's a good thing. It did not help so much in today's condition.

Ernee next year. We have got to ask this. We ask it every year. Everyone's scared that Team USA aren't going to show up and without Team USA this event loses everything. You are going to keep coming, right?
I want to, but there is a fairly big entourage who will come with us and will expect to get some tickets and all that. The organization, they make fun of us when we come and want 60 tickets or something like that. When you look at that, there is practically no prize money and how much money that we put in… Between the factories and a little bit the AMA, it's probably close to $300,000 to come for this event. Then even as a team manager, you don't have a spot where you can see the race properly.

You have to fight the public. You need all these passes, and even with an all-access pass you end up at the place and you have to fight people to be able to see the track. You have to park a mile away with 100,000 other people. I think we deserve this, but not only the US team. The participants and the people who work… We deserve better treatment, I feel.

Compared to, say, 2011 when USA last won, how much harder is it putting a team together to come here? Is it harder than you ever believed it would be?
No. I knew how hard it was going to be. When I started to run the American team, I did it as the US was not coming that year. Then last-minute Dave Arnold and I, we were running a Honda team and at that time we had five riders on the team. I decided to take our team and come to Europe. Then Motocross Action [Magazine] got involved and got behind it. At the time, Bel-Ray Oil also supported it and all that. That's how I started doing it, because I felt it was wrong for a country like America not to be present.