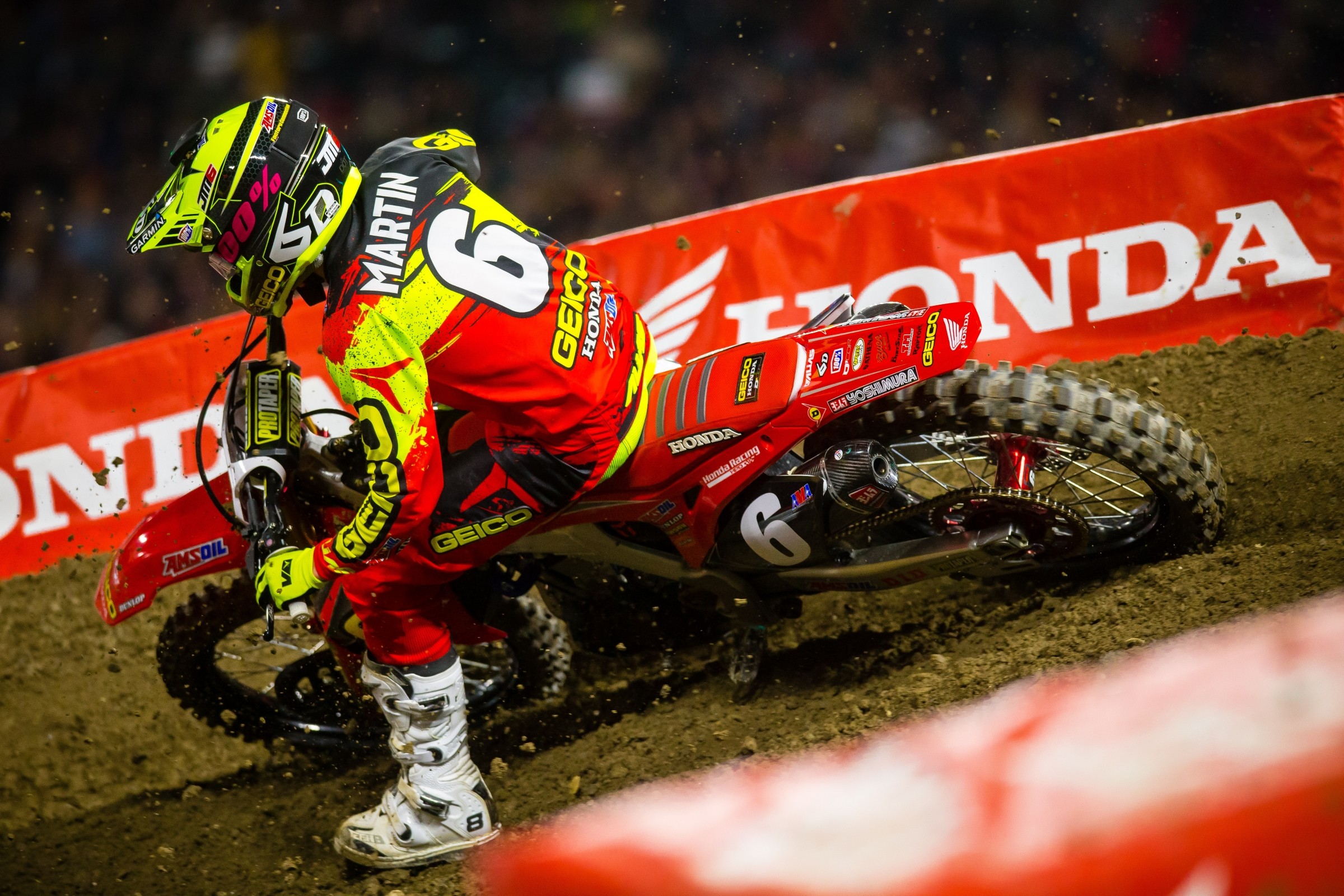 Comment: Barcia fractured his lunate bone and incurred some ligament damage before the season. He’s out for Oakland but the team says they’re hopeful he’ll be back soon.

Comment: Bogle missed Glendale after a crash in his heat at A2 left him with bruised lungs, despite wearing a chest protector under his jersey. He’s in for Oakland.

Comment: Canard will sit Oakland out after sustaining a tear in his rotator cuff at the opener during practice.

Comment: Noren had his tonsils removed recently and is looking forward to being ready for the start of the 250SX East Region.

Comment: Peick lacerated his kidney and dislocated his wrist during practice in Glendale. The wrist required surgery (no word yet on whether or not doctors had to use a plasma cutter after Peick’s skin proved too tough for ordinary surgical scalpels) and there is currently no timetable on Peick’s return.

Comment: Roczen had a huge crash at A2, suffering injuries to his wrist, elbow, and radius (forearm). You won’t see him on the track for the foreseeable future, but if you want to see what the inside of his forearm looks like go here.

Comment: Alldredge will race in Oakland after a being sidelined with a broken collarbone.

Comment: Bisceglia hopes to be ready for the start of the 250SX East Region after breaking his foot before the season.

Comment: Bowers fractured his right femur in a nasty crash during practice in Glendale. He’ll be back in Seattle at the earliest.

Comment: Commans injured his arm and wrist when he came up short on a triple in Glendale. He’s out for Oakland.

Comment: Martin took a big hit to the face during practice in Glendale when he was collected in Tyler Bowers' big crash. He's out for Oakland but the team hopes he'll be back for Arlington.

Comment: Mellross injured his hand in a first turn crash at A2. He missed Glendale and will also miss Oakland, but should be ready to go next week in Arlington.

Comment: Nichols hopes to be ready for the 250SX East Region after breaking his femur before the season.

Comment: Oldenburg broke his collarbone during practice in San Diego. The team expects him back in Seattle.

Comment: Sexton suffered two minor breaks in his wrists in December. He’s back on the bike and will race in Minneapolis.

Comment: Taft suffered a concussion before A2 and will not return to racing before the series heads east.