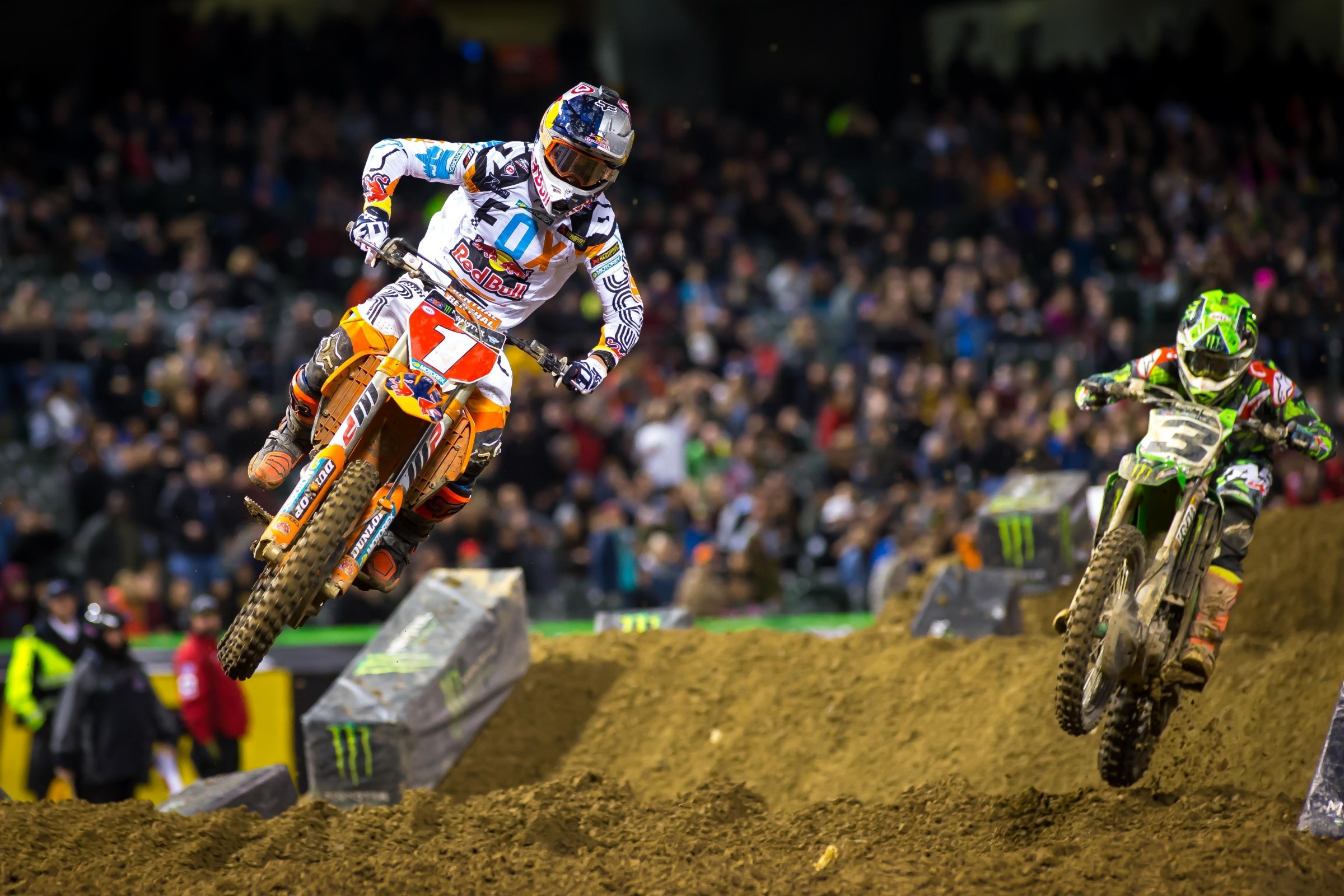 What a race on Saturday in Oakland. Red Bull KTM’s Ryan Dungey turned what looked like a bad night around by jetting off to the early lead, and when Dungey does that, the race is usually over. But Monster Energy Kawasaki’s Eli Tomac went next level, and reeled Dungey in despite starting the race in eighth. It was a resounding win for Tomac, his second in a row.

Dungey did extend his points lead, actually, as Marvin Musquin, who was formerly ranked second, had a bad night with a crash and finished ninth. Tomac vaults to second in points, but is 17 down on Dungey. Dungey and Tomac spoke together on stage at the post-race press conference.

Racer X: Eli, not the best start in the main event. I think you were about eighth or ninth. About halfway through a light switch went off and you were a house of fire. You were jumping the triple-quad in that rhythm section after the finish line. How much did that help you move through the pack and eventually take the lead and pull away?
Eli Tomac: That line was good. But for me, I was struggling with flow all day. It was pretty bad, and in the heat race I felt like I didn’t know what I was doing, really. I was pretty buried. I think that semi race was a good saving grace for me. Getting out there, breathing, and going for it. Yeah, it was a bad gate pick and I got beat on the start, but I was able to blow some nerves out, some cobwebs. I went to the main and found it.

Eli, patience seemed to be the name of the game for you. How’d you move through the field without panicking?
Tomac: It was tough. There were places where you could make a pass and other places you couldn’t. There were a lot of times you’d run up on a guy, like before the finish I’d get on the outside of guys going into the whoop section, but it funneled into that one rut so I’d have to stay behind him. But there were other good spots, like that sweeper you could get underneath, or maybe even the whoops. You had to pick and choose for sure.

Eli, does it help you mentally early in a race when you’re a little bit behind, knowing you’ve got 20 minutes plus a lap instead of 20 laps?
Tomac: It’s good for the most part, as long as you’re feeling good for how you’re going. But for me, those first couple rounds, I would have liked it the old way because of how bad I was getting. But I think for the most part, it’s just consistent and I like it.

Ryan, that’s six podiums in a row and you extended the points lead to 17. You had a good lead there in the main, but that dragon’s back section, the second one, you didn’t seem like you liked it one bit.
Ryan Dungey: Yeah the track was tough. There were some spots where we were a little uncomfortable I think. A track like that, it brings out the rider and the talent. You have to really put it all together. We went for it in the beginning and opened up a nice little lead, which was good. I could gauge where Eli [Tomac] was, I could see he was doing that rhythm lane, but all in all it was a good night and I was happy with it. There were just a couple spots I was losing time on the track. I’m happy with that, it’s not like it’s a bike thing. We’ll go to work this week and try to get better. But yeah, I was losing time in a few spots. Considering where we started out, we made a lot of progress today and I’m really happy with hit.

For Ryan and Eli both, difficult heat races for you guys. Did the extra track time in the semis help in the main and help you see how it was going to break down?
Tomac: Yeah. I mean, for me, it was really just getting out there and getting more laps because it was such a technical track. You really had to get that flow, like with the dragon’s backs, or maybe that big line after the mechanic’s area. So it was good, other than the bad gate pick.

Dungey: For me too. I wasn’t even disappointed when I got fifth in the heat and went back. I was like, “One thing, I need more laps.” I felt like I didn’t have the flow in practice either. I got out front and was able to try a few things with the bike, experiment a little bit and get some more track time and see how it was going to be in the main event. For me it was a positive as well.

We’ve missed a bunch of untimed practices this year. Does that bother you or does it make a difference?
Dungey: These guys might feel differently, but me personally, I like two practices. But eight minutes is not enough. Especially a track like this that gets so chewed up and is constantly changing. It takes a little bit more to get used to. So it was nice to get that semi and get more track time. I went in the heat and I felt like I’d barely put any laps in. Having two practices is a little bit mellower, the schedule, you’re not just boom, boom, boom. I think the best thing would be to have two practices, but make them 12 minutes, or go back to the old way, two 15-minute practices. I’m not upset, but it’s getting to a point, I mean, you get 16 minutes out there and how many laps can you really get before it’s time to go racing? You’re kind of getting to the bare minimum. You’re lucky if you get comfortable. And that’s what we have to make work, you have to get to it in supercross, but it’s minimal. I think we need to downsize how many practices we have and make the practices a little longer. It’s a balance. Something to talk about, I think.

Ryan, you seemed frustrated today, your body language anyway. How do you stay calm when things get a little rocky and you’re up against time and the bike isn’t feeling great?
Dungey: I think it was just wanting to do better. You put in a good lap in practice and you’re ninth and it’s like, “Jeez, that’s all I had.” But we went back and decided to make some changes, which were good. A track like this requires a good setup, it’s not just a hardpack track where you can get away with a lot. I wasn’t frustrated, I just wanted to be better. In the end I knew everyone is just throwing one hot lap in out there, so it’s a little different in practice. But we were fighting it a little bit, it happens, and I was glad that we made a positive out of it. We got through it and came out better than when we started. That’s all I could ask for. If we’d struggled in the main event and still fought it, it would have been a disappointment. But we have a good group of people and it worked out good.

We’re leaving California and getting into the domes next week.
Tomac: Yeah, we won’t have to deal with cut practices. Going back to that, I’m all for two longer practices and getting rid of untimed practices.

Dungey: I’m excited to head back east. The West Coast is good, but those East Coast rounds are fun. The stadiums are nice and the dirt is good. We’re heading to a different part of the country, it’s good.