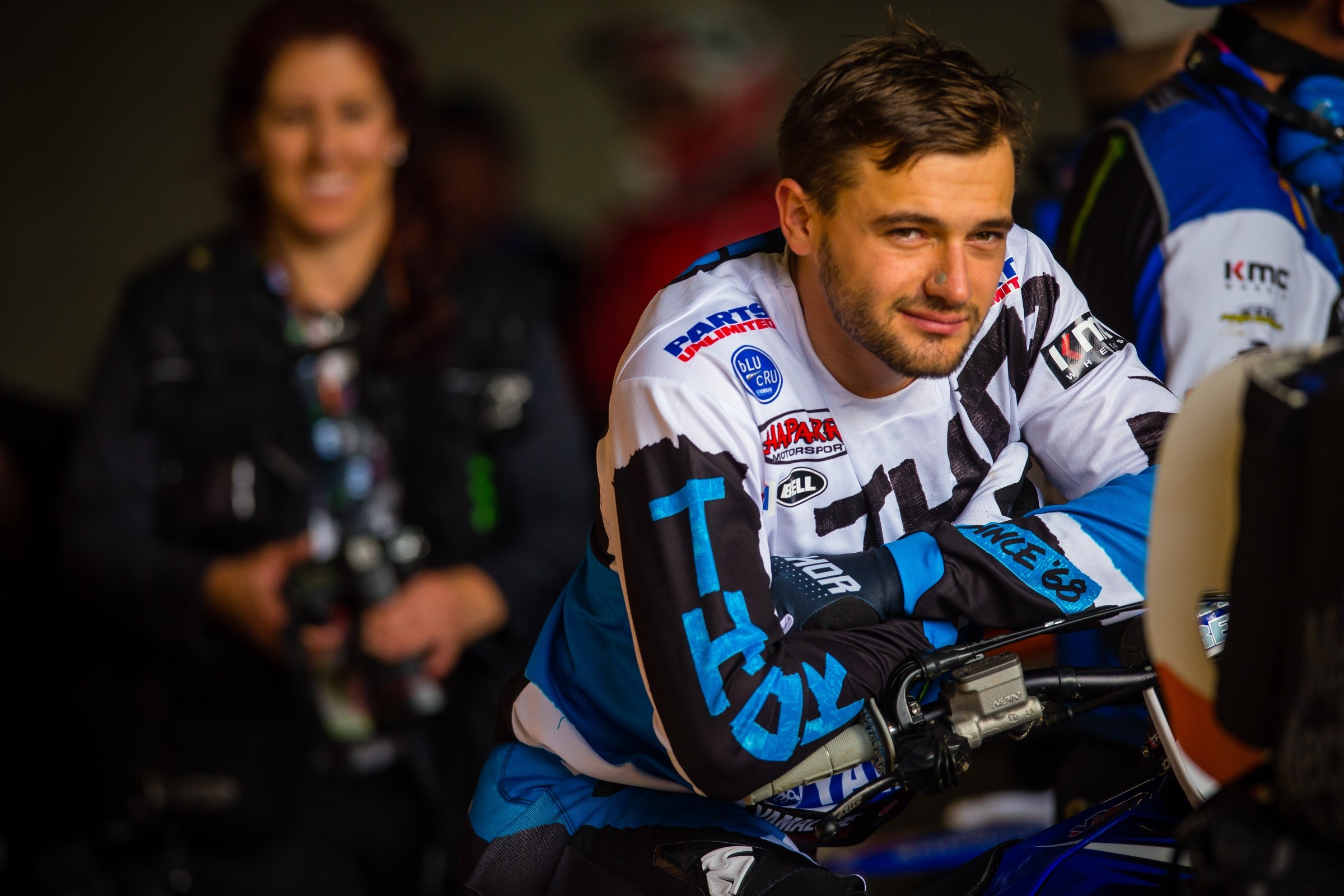 It didn’t start so well for Cooper Webb, but suddenly this is looking like a promising rookie campaign for the Monster Energy Yamaha rider. After struggling to make the top 10 at the first two races, Cooper has gone 4-8-3 in his last three, and looks much, much better than he did a month ago. Oakland represented his first career 450SX podium, but strangely enough, he does not credit any major bike changes to the improvement. Instead, he maintains he just needed to get in the right frame of mind for the races. Remember, at Anaheim 1, the normally head strong Webb commented that he was a bit “star struck” looking at his competition in the 450 class. Clearly he’s putting his thoughts together in the right way now.

“Mainly just the mentality of it all, really,” is where Webb credited his recently improvement. “I think I’m gaining confidence and getting better and better. The bike is coming around, we’re doing some racing, and racing for me is the best way to push the bike and myself. I think that was the main thing and I’m getting more confident. Today went really well. You have those days where you know it’s going to be a good day, so it was nice to back it up in the night show.”

Last week, Webb’s teammate Chad Reed made the podium and said the team finally gave him flexibility to make the bike changes he wanted, which helped tremendously. Webb says that doesn’t really apply to him, though. For him, it hasn’t been about changing the bike as much as learning how the bike will change from riding at the practice track to riding in the actual races.

“They’re quite a bit different actually,” Webb says when comparing his bike to Reed’s. “For me it’s just little stuff I’ve been working on. Like I said, you can only get so much out of your bike on a practice track. Coming to the races, the first couple in my opinion were so much different with layout and stuff like that. You feel like you make progress in the week and you get to the racetrack and it’s totally different. For me I didn’t change too much stuff, just went back to the basics and went from there. I know he [Reed] had a long week testing last week, but I just did my thing.”

With the bike working the way he wants, and his head in the right place, now Webb gets to learn from some of the best in the business. Cooper may be young, but he’s already proven as one of the most cerebral riders on the circuit, someone who can watch other riders and himself, and learn and adjust in a hurry. He did a bit of that in Oakland while measuring himself against Ryan Dungey and Eli Tomac.

“At first I was trying to pace myself off Ryan, and a little later on I saw Eli was coming and thought he had to have been doing something,” he said. “Then I saw he was doing that rhythm section [triple-quad], and like he said, he [Tomac] kind of got going especially about halfway, right about when I started thinking a lot. It’s tough. How much effort do you put in? That line of pushing it and getting a little sketchy and trying to have a good race. For me I think that’s when it kind of hit. Once he got around me I tried to stay with him a few laps and made a few mistakes, and that’s when I almost settled and kinda just rode it out.”

This time Webb wasn’t able to quite hang with Dungey or Tomac, but you can trust those laps he spent around them will come back as valuable lessons learned—and applied—later in the season. But late in the race, while trying to bring home his first podium, Webb hit a snag.

“I actually made a mistake and kinda got some dirt clogged and stuck in my brake and had to get that out. That was a little nerve racking,” he says.” I definitely wanted to be on the podium, and I knew he [Jason Anderson] was coming and wanted to get it as well. You kind of get in a groove to where you feel comfortable then stuff like that happens and you have to push the limit once again. I was glad to regroup and still get up here.”

With the podium, he’s checking more boxes and learning more things. Next up, a trip east, which Webb has actually never done before. Although he was born and raised in North Carolina and recently purchased a house and a track in his home state, Webb has spent all three of his professional supercross seasons racing the 250SX West Region.

By the time the series works its way back west, don’t be surprised if Webb has figured out the next lesson in his supercross development: how to get a 450SX win.