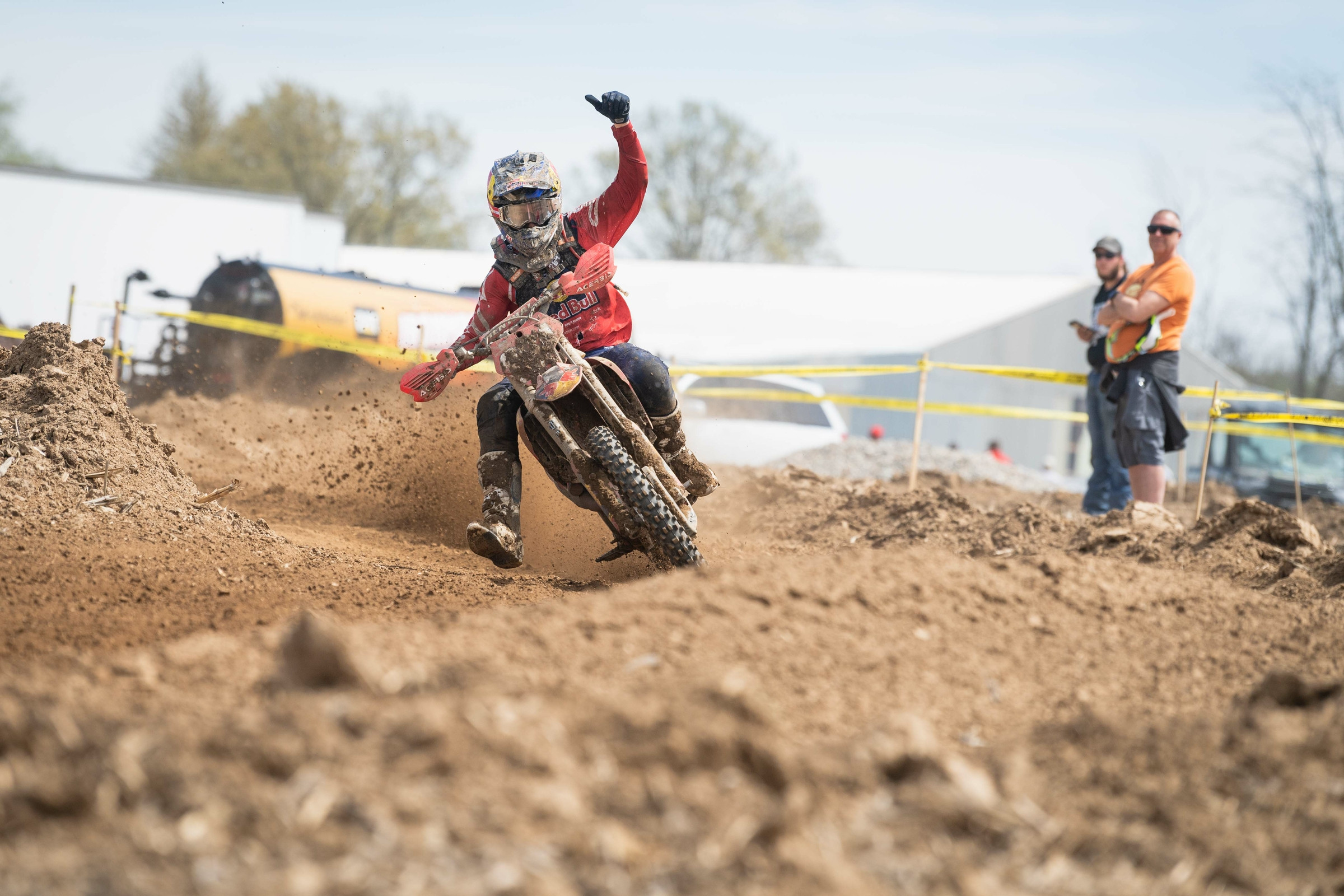 GNCC Report Sipes and Pastrana vs. The Women’s Class

For the sixth round of the 2021 Grand National Cross Country (GNCC) Racing season, an early visit to Indiana’s Ironman Raceway would mark a unique change for the series. Dubbed the “Hoosier GNCC” this round saw the earliest in the year that a GNCC event has ever been hosted on the Ironman Raceway property. Don’t worry, the traditional Ironman GNCC is still on deck for the season finale in October, and the Hoosier round presented its own unique feel, much different than the typical Ironman event. Here are a few things we learned.

Ironman Raceway has long been famous for its amazing dirt, even before its addition to the Lucas Oil AMA Pro Motocross Championship schedule in 2014. Western Indiana is full of farmland for good reason—great dirt! This translates incredibly well for GNCC racers also.

There are really not many rocks to contend with other than a few where the course passes underneath a bridge. There are some tree roots, but much fewer than other events. There are a few muddy areas here and there but there’s plenty of ways to get through them, so they don’t cause any major bottlenecks. These are just some of the reasons everyone loves The Ironman event.

The Indiana area had been dry for some time leading up to the event, but steady rains Wednesday night into Thursday morning led to the venue quickly drying out through the day on Friday, and kept just enough moisture in the ground for that amazing dirt to produce some of the best conditions ever. For this track, that’s a high bar.

Things began to change when Stu won the opening round in 2017. He clicked off another win in 2018, one more in 2019, and would go on a tear at the end of 2020 season. After missing the opening round of 2021 due to injury, and suffering a clutch issue at round two, Stu is on a tear once again. He’s now clicked off four wins in a row with another one coming at the Hoosier.

Stu led every lap but spent the first two hours of the three-hour event battling his AmPro Yamaha teammate, Layne Michael. Ben Kelley (overall points leader) would eventually find his way around Michael for second, with Michael ending the day in third. Thad Duvall has been through a bit of a rough patch with injuries the past two seasons but the multi-time race winner is working back towards his old form and finished a very respectable fourth place. Jordan Ashburn rounded out the top five.

Kelley still leads the standings, but Steward Baylor is now just five points back. Not bad for not even racing the opening round! Things are set to be very interesting, as there are now just three rounds before the summer break.

May 2, 2021
Ironman Raceway
Crawfordsville, IN

TP and The General Showed Up!

You can’t really talk about this event without mentioning the appearance that Travis Pastrana and Ryan Sipes. On a bet from defending WXC champion, Becca Sheets, TP and Sipes made an all-night trek from Saturday night’s American Flat Track event in Atlanta, to Ironman Raceway. That’s about 500 miles away! Arriving early Sunday morning, and surely downing some Red Bull, the two suited up to race the Sportsman A class. The bet: could they beat Sheets, the Women’s GNCC Champion?

Pastrana has raced a number of GNCC events over the years, even leading the pro class for a couple laps back at the 2008 opener. Sipes spent a few seasons racing GNCC full-time, and even has an overall win to his credit. So, these guys really are no slouches when it comes to GNCC Racing, or, really, any racing. I mean, this is Travis Pastrana and Ryan Sipes we’re talking about! However, the top WXC racers are no joke, either.

In true Pastrana style, he went really fast for portions of the race but also crashed really hard. In fact, Steward Baylor shot a video of one of those crashes. TP attempted to use a braking bump as a takeoff to jump over a mudhole and land on top of a nearly vertical bank. Travis made it over the top, but then crashed in spectacular fashion.

Eventually Travis bowed out of the race a bit early. His did put together a superb post-race report on video while lying under the tree that ended his day. It would be up to Sipes to try to beat Sheets and win the bet.

Well, Sipes would go on to win the Sportsman A class. However, he would not win the morning overall! Sheets would hang on to win the WXC class and the AM overall, edging Sipes by about a minute. Therefore, Becca would also win the bet, as neither Pastrana nor Sipes were able to beat the WXC leader for the win. So, in other words, those top GNCC ladies are really fast!

For the last two seasons, we usually discuss the close battles in XC2. This season is starting to look different. The same three riders are in title contention, but Coastal Racing/GasGas’ Johnny Girroir is on a tear, now carding five-straight wins! The Johnny Girroir story is another pretty unique one as well. Hailing out of Southwick, Massachusetts, Girroir never really raced GNCC much until the last several seasons.

Girroir gained attention as a super-fast New England rippa from the J-Day Off-Road series. He’d show up at some occasional GNCCs appearances and go really, really fast. The long three-hour GNCCs events were a big change from the more sprint-style J-Day events but eventually Girroir moved to GNCC full-time and figured out the strategy.

He led the series last year until a late crash dropped him out of contention due to missing the final round. There are still others who are looking to take this year’s title for themselves. Mike Witkowski ended up second place at the Hoosier on his Yamaha and is the only other rider with an XC2 class win in 2021. In a little bit of a shakeup, Cody Barnes landed his first XC2 podium of 2021 with Liam Draper and Thorn Devlin rounding out the top five in the XC2 class. Draper actually led part of the race and ran in podium contention for most of the day, but a mechanical issue late in the race would drop him to fourth. Meanwhile defending class champion Craig Delong suffered his worst finish in quite some time with a sixth. He was sick coming into the race and finally ran out of energy down the stretch. Of course, if sixth is your worst day, you’re still doing really well! The question is if Girroir can keep up this level of riding all the way to the end. The rest of the pack is staying consistent and stacking points just in case.