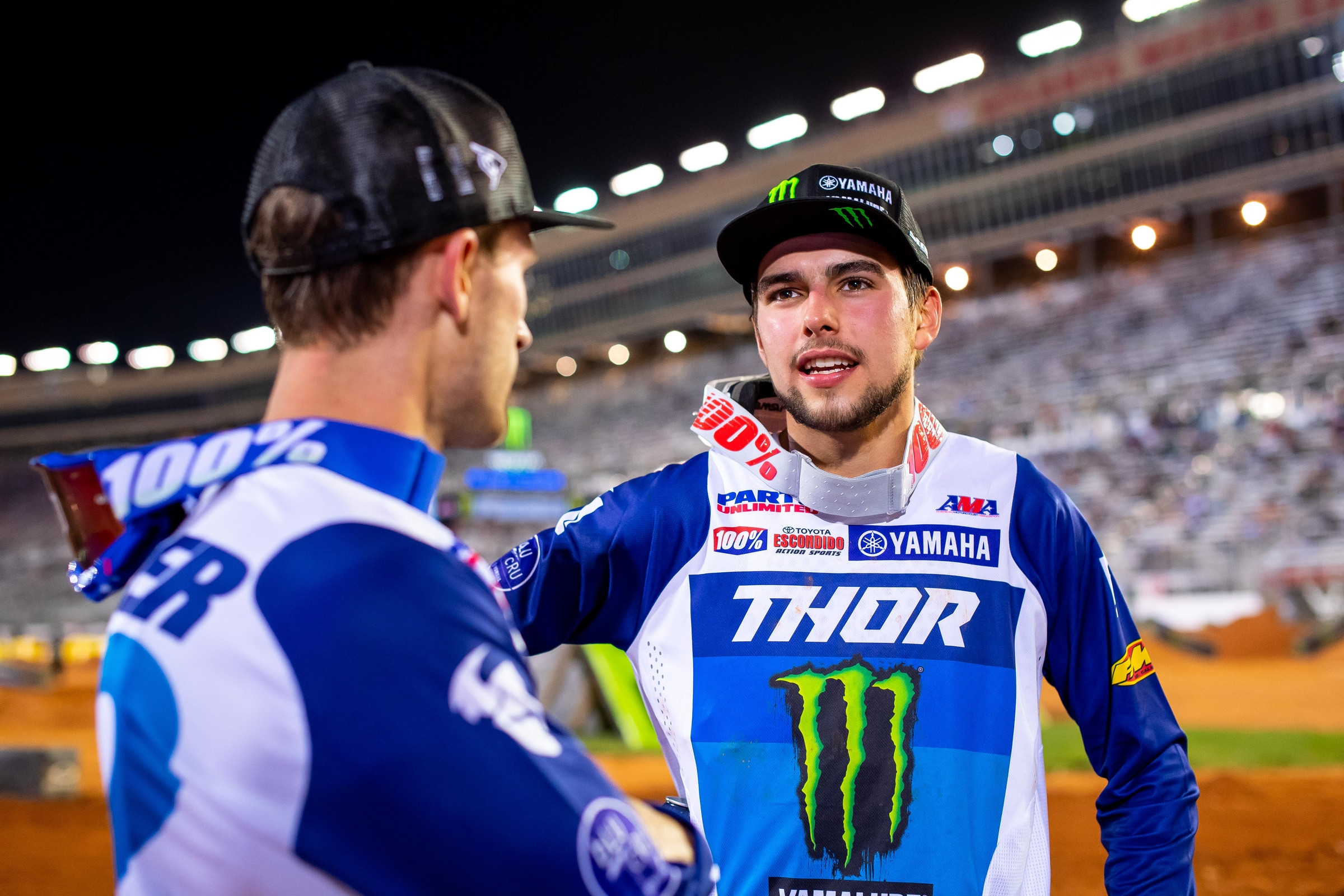 Between Thrasher Sets Sights on Outdoors

It’s hard to imagine that a handful of months prior to the drop of the gate on the 2021 Monster Energy AMA Supercross Championship that the Monster Energy/Star Yamaha Racing outfit wasn’t exactly sure if they were going to send 18-year-old rookie racer Nate Thrasher out to contest the 250SX Regional Supercross Series or not. A veteran of exactly two Lucas Oil AMA Pro Motocross Championship 250 nationals—Thunder Valley and Pala way back in October 2020—at the 11th hour the team made an on-the-fly decision to send Thrasher back to the Mini Olympics in Florida to rack up the required eligibility points for ‘21. The kid from Livingston, Tennessee did just that, and with requisite points shoved into pocket, found his way behind the starting gate at the Orlando 2 Supercross round on February 20, 2021, where he duly went out and raced to an 11th-place finish. Cautiously optimistic, both Thrasher and Star Yamaha kept shuffling forward, the YZ250F rider scoring a 20th at Daytona, as well as a tenth and two ninth-place scores at the three Arlington, Texas rounds.

Then came the opening Atlanta Motor Speedway race on April 10, 2021, and with it, astonishingly, Nate Thrasher’s first professional supercross main event victory. Having scratched and clawed his way out of the last chance qualifier, Thrasher found himself way out front in the main event and he never wavered, handily winning the 13-minute-plus-one-lap race upon the infield of Atlanta Motor Speedway. Amazingly, and precisely a week later, went out and basically replicated the same exact feat to yet again win both the LCQ and main event! Sixth in the 250SX West point standings leading into the fade-to-black final Salt Lake City round, we were surprised to hear that Thrasher, obeying team orders, would skip over the Salt Lake finale to make sure he was in optimum fighting trim for the rapidly approaching Lucas Oil AMA Pro Motocross Championship opener set for Fox Raceway in Pala, California on Saturday, May 29.

“I’m actually not racing the last Salt Lake race,” examined Thrasher the eve of the final round of supercross. “It was just kind of a team decision. They just wanted me to start getting ready for outdoors. This will be my first season of outdoors, so we want to go out there and contend for a championship so we just wanted to get a little head start.”

[Note: Thrasher was close to the 135-point threshold for the season (he had 127 after eight rounds). Riders get four seasons of 135 points before they must move to the 450 class. By holding him from Salt Lake City, Monster Energy/Star Racing Yamaha prevents Thrasher from burning a year of eligibility.]

“I’ve actually here in California and we’ve just been grinding out motos,” said Thrasher. “I’ve done a bunch of 35-minute motos. Last week was pretty much my first week on outdoors and it’s feeling really good and I’m feeling good on the bike and I think we’re going to contend for a championship.”

Thrasher will not be looking at the 2021 Lucas Oil Pro Motocross 250 Class Championship classification as a mystery as he competed at the aforementioned Thunder Valley and Pala rounds last autumn where he raced in and around the top ten.

“I raced the last two nationals last year just to get a little bit of experience so I kind of know what to expect going into this year and the outdoors so we can go out there and win some races,” he says. “I don’t even think I had a week on the bike as I had changed manufacturers. I didn’t have much time to prepare last year, so this year we’re coming in with a lot more preparation time and we are going to be prepared. We were super-happy with what I did in those two races last year just because of the limited amount of time I had on the new bike and with changing teams and stuff like that, so we thought things went pretty well. It was good to get my feet wet a little bit just because I know what to expect this year because the amateurs and pros are totally different. I just wanted to get a little bit of experience so I know what to expect in this first full outdoor season.”

It can totally be debated that young Nate Thrasher is he breakout sensation of the 2021 lockdown supercross season. Others, such as fellow rookie race winner Seth Hammaker, were good, as well. In what was just his sixth career 250SX start, Thrasher went out and won at Atlanta Motor Speedway as a supercross rookie, the fourth different winner in the West Region in ’21 along with Hammaker, Hunter Lawrence, and Cameron McAdoo.

“We kind of came into this year not really expecting to race supercross,” explained Thrasher. “The original goal for this year was just to race outdoors. I started riding pretty good in supercross while I was training with the guys and we decided to go ahead and get some experience for next year so we can try and go win the championship. We started off a little slow with decent finishes, but not really what we wanted. The speed was there was I was just lacking a little bit with the starts and stuff like that. There are a lot of good guys out there and we are all pretty close, so if you can minimize your mistakes and get better in some areas, I mean you can go from ninth to first like I did.

“After the third Arlington, Texas race we had three weeks off there and we just put in a lot of work in those three weeks in just trying to get better,” continued Thrasher. “I then really came out swinging at Atlanta.”

“You kind of know when you go out to the practice track and you can see that you can run with those guys, you know you’re going to be right there at the races and that was the biggest thing,” Thrasher said. “In the off-season I could run with those guys, and doing the same thing at the races just took a little bit of time. Once I got that figured out it really helped me a lot. I think with those guys pushing me—they go behind me on the tracks sometimes and I go behind them sometimes—you get that experience of what a race situation is like. I’ve just been putting in the work and trying to get a little bit better at every race. I mean that was the goal this year. The goal was to just get a little bit better and then a little bit better. This year was kind of unique with the longer breaks that we had between some of the races. The three-week break between Arlington and Atlanta really helped me. I felt like that Arlington 3 race was the turning point of the season and right after that things kind of all started clicking.”

To run up front and win two 250SX West events has had a profound effect on Thrasher and his confidence in now knowing that he truly is among the great young supercross riders of the racing world.

“Some people say it’s a little easier once you get up there and you know you can do it,” offered Thrasher. “I felt like once I got in the lead and was clicking off my laps and pulling away from the guys I thought, ‘Man, I can do this.’ I put my head down and really didn’t think about too many things to the last lap and then it all kind of set in. I knew there were a lot of good guys behind me and they were pretty close behind me, so I knew I had to just ride my race. That’s kind of how I was looking at it. At the beginning of the year we were kind of looking for podium finishes and we didn’t start off the way we wanted. We didn’t start that good in the early races and that was the main thing we worked on. We really worked on my starts. It’s hard to come from the back to the front. Not many guys can do that. When I was starting fifteenth or sixteenth, that was kind of holding me back. There are a lot of good guys on the track and the tracks are tight sometimes, so it is hard to come from the back. Once I got the starts down I had the confidence and then I got that first win and then I just started clicking things off. From here, week by week, we just want to get a little bit better and a little bit better. I’ve still got to improve on some things and I’ll be better for next year. I think we just need to keep working. I feel really good on the bike right now and we are working away in doing motos and things are going really good. The goal is to go out there and contend for a championship this summer and I feel like I can do that. We’ll take it week by week and then I’ll just try and put myself in a good situation and keep myself up there with starts and stuff and the goal is to try and go after wins every weekend and if we can do that we are going to be happy with it. We just want to be in the top five every weekend. That’s the goal.”