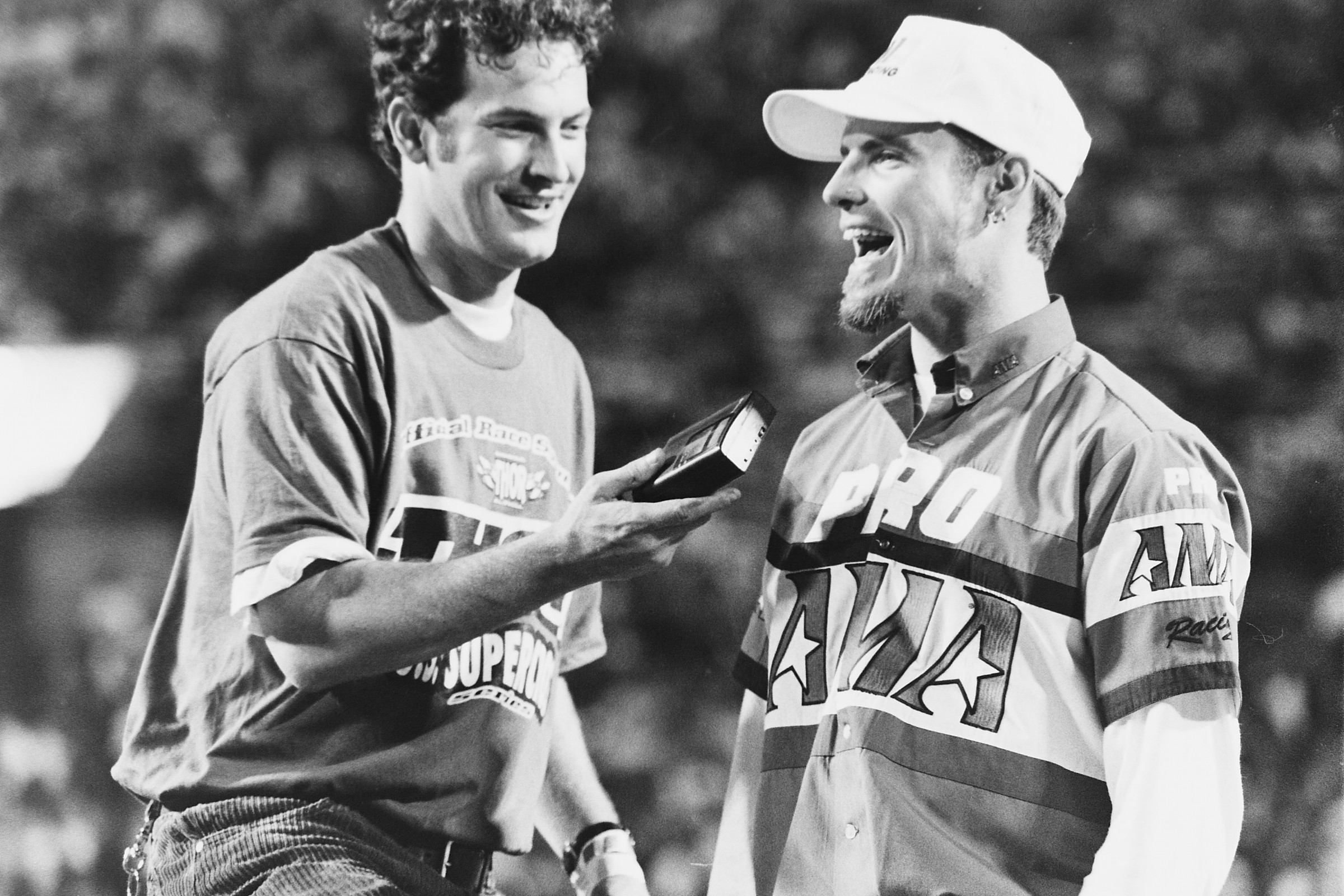 In 1985, a decent prospect out of Texas qualified for the 125 B Stock and Mod classes for the 1985 AMA/Wiseco National Motocross Championship. Riding a Kawasaki KX125, Robert Van Winkle had a mixed week (He’s in the Vault under Robby). He finished 13th in one class, but a third-moto DNF in the other knocked him back to 37th. Few probably remember Van Winkle for what he did at the Ranch, or really on any other race track, but what he did next would make him a pop culture sensation, a household name, a music superstar and, in that ultimate badge of nineties stardom, he even dated Madonna! (That’s for you @90smotocross and @wewentfast) Even now, he’s got his own award-winning reality show. Not bad for a guy who got 13th in the 125 B class at Loretta Lynn’s!

Of course you know by now we’re talking about the rapper known as Vanilla Ice, a Loretta Lynn’s graduate who decided to focus on music in the years that followed his one and only racing appearance at the ranch. A break-dancer as well as a rare white rapper who could “spit” freestyle with the best of them, he had a meteoric rise to the top of the charts with a little help from the intro beats to the Queen & David Bowie song “Under Pressure,” reconfigured for his “Ice, Ice Baby” song that became the first hip hop single to top the Billboard charts. Then came the awards, the money, Madonna, a movie with the Teenage Mutant Ninja Turtles, a star-turn on Saturday Night Live and so on and so forth.

Born on Halloween in 1967 outside Dallas, Robert Van Winkle was into moto and music. He raced with the likes of Trampas Parker, Grayson Goodman, Jason Upshaw, Billy Whitley, and all of those fast regional guys at the time. But his music and his uniqueness in the rap genre made him the perfect package for a record label looking to exploit what had been a void there—a good-looking white rapper. It was similar to what happened with Elvis Presley when he first rose to fame with Colonel Tom Parker as his agent. It worked, in large part because Van Winkle, like Presley, was genuinely talented as an artist. Early in his career he opened for well-respected rap acts like NWA, Public Enemy, 2 Live Crew, MC Hammer, and more.

Something that Van Winkle would later regret was the way the record label marketed him, making up a biography that made his life seem much harder than it was (and it was hard to start with—he never knew his biological father). They also exaggerated his suburban Dallas life into something much more thuggish—death threats by notorious producer Suge Knight may or may not have happened—and his motocross successes were also overstated often. The company also made him morph his looks into a more commercial appearance to stand out in the mainstream, with the baggy pants and all that jewelry and eyebrow-shaving and whatnot.

Vanilla Ice got about as big a pop star as you can get in the early nineties, but then along came grunge and a lot of blowback from fans who didn’t think he was legit. After some so-so movies followed less successful records than his Grammy-winning “To The Extreme,” he faded out of the limelight and moved to Miami, got married (not to Madonna, of course) and started a family. He remained a huge fan of moto—he was a caution flagger on the infield of the 1996 Tampa Supercross and raced locally as much as time would allow.

In 2009 Ice began hosting a home-renovation show called The Vanilla Ice Project with his good friend and longtime moto announcer Wes Kain on the DIY Network. He’s still recording and touring, and he even came back to Loretta Lynn’s Ranch in 2009 as a guest of Thor/Parts Unlimited, performing under the pavilion and taking some laps around the track with his longtime friend Jeremy McGrath. Ice was also a pretty good Jet-Ski racer, at one time ranked sixth in the country.

The long, strange and very interesting life of Vanilla Ice will make for a great book and maybe even a movie someday, but for now Robert Van Winkle is a happy man with a hit TV show, money in the bank and a bib on his wall from the 1985 AMA/Wiseco Amateur National Motocross Championships at Loretta Lynn’s and a 13th place finish in the Vault.

Also, check out this podcast Steve Matthes did with Robert back in 2016.