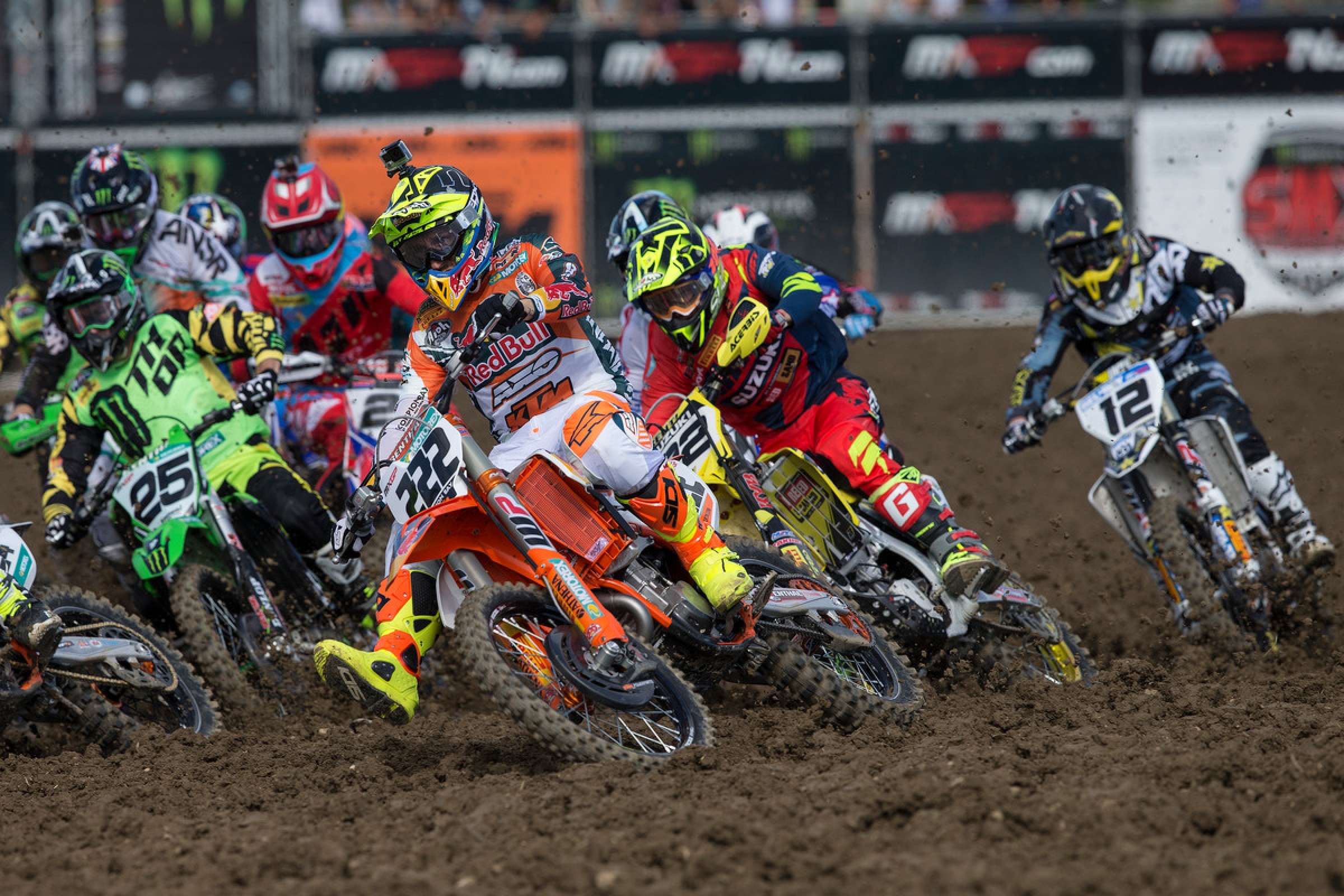 For the fifteenth round of eighteen in the 2016 FIM Motocross World Championship it might be easier to try and identify the elements the Grand Prix of Switzerland lacked for what was essentially a magnificent return by the country to the international racing stage and a wholesome bid for the best event of the season thus far. There were many virtues to the fixture at the new purpose-built Frauenfeld-Gachnang facility that initially attracted scepticism for its flat locale in arguably one of the most picturesque and mountainous countries in Europe. Any cynicism was unfounded. The weather was stunning after an early and rainy scare in the run-up to the third GP in as many weeks (the water actually dowsed the terrain terrifically), the track was rutty, technical with line choices and had riders comparing it to an AMA course in terms of the grippy and soft soil. Then there was the public. The official figure for the weekend was pegged at 45,000 and there can be little doubt about the bulging capacity of Frauenfeld. The place and grandstands were rammed, raucous and receptive. Switzerland had been starved of Grand Prix since 2001 and it appears the fans were ravenous for MXGP.

On this stage Red Bull KTM’s Tony Cairoli continued to flit between machinery choices and after two rounds of experimenting with his tried-and-trusted 350 SX-F he went back to the 450 and duly claimed his third success of the year with a 1-5 and Pole Position to boot. The Sicilian is currently undergoing a serious evaluation of both bikes with 2018 upgrades and parts to prep for a 2017 tilt at the crown that is nearing the fingertips of Honda Gariboldi’s Tim Gajser—winner of the second moto here after crashing on the first lap of the opening moto and coming back to ninth. Cairoli had the starts and the first real indication that he was enjoying his riding once more as he owned the first race convincingly.

Gajser was in the mix for the second moto win and Monster Energy Yamaha’s Romain Febvre also joined the fray as Cairoli tried to run the pace of his younger rivals (Gajser eleven years his junior and Febvre six) and eventually eased the pace in the final laps, only to trip up with a lapper on the last circulation and fall to fifth, almost blowing his weekend.

With Gajser just four points adrift on the day in second place (fourteen podiums from fifteen now for the rookie as he bids to become the first back-to-back champ in the MX2/MXGP categories in the modern age of the four-stroke formula) his margin over Cairoli lies at 99 in the standings with just three rounds and 150 available. (No wonder Cairoli and Febvre were publicly talking about their tests and experimentation for 2017.) The World Champion, Febvre, was able to smile in the wake of his second podium result since returning from concussion and after a disastrous start to the weekend where he simply could not gel with the course or find an effective rhythm. He even slipped off in the first moto and lost four positions to eighth, probably ruining an outside shot at victory.

Frauenfeld-Gachnang might well have been a track that the riders wanted to attack but it also caught several unawares. HRC duo Gautier Paulin and Evgeny Bobryshev, Monster Energy Kawasaki’s Clement Desalle and Kemea Yamaha’s Valentin Guillod all got a taste of the Swiss mud at some stage. As did Suzuki’s Kevin Strijbos who came back to earth with a bump after the glee of his home victory in Belgium the previous Sunday. Cairoli’s teammate Glenn Coldenhoff rode well to a season-best fourth overall and a third position in the second moto. Monster Energy DRT’s Tommy Searle also enjoyed a season-high sixth and some long overdue development on his stock KX450F allowing the talented Brit to remind the MXGP audience of his speed.

The Cairoli-Gajser-Febvre axis in the second moto was a fine spectacle. The sight of Cairoli and Gasjer full pelt, side-by-side through the waves section was so sensational you urged them to make it last. The rows of packed seating only metres away also lapped up the close contest.

The crowd had already warmed the vocal chords however. The MX2 class might have been diminished by the absence of all three Red Bull KTM riders and a nasty double arm break for Monster Energy Kawasaki’s Dylan Ferrandis (the winner of the Czech Grand Prix two weeks ago was operated on Saturday night in Lyon, France, but also needs an MRI on a suspect knee problem) but for the capacity partisan crowd it did not distract from Jeremy Seewer’s sharpest bid yet to convert a tally of eight podium visits to a ninth trip, but scaling the top plinth instead.

The Suzuki rider drew the pulp of the support in his favour—his every move and position-gain was cheered veraciously. A slack start allowed Rockstar Energy Husqvarna’s Max Anstie to make a seven second gap in the first moto, once the Brit has passed the eye-catching Samuele Bernardini on the TM. Seewer tried to slice at the gap but then opted to save his energy for the second outing. The tactic seemed to pay off as the two protagonists quickly got to the front of the field and began a chase that saw Seewer catch and pace-set for three laps while Anstie assessed lines and then re-passed his rival. Backmarkers helped the minor cushion between the leaders expand and shrink and Seewer’s valiant charge on the last lap was only foiled by less than 1.5 seconds by winner Anstie who deservedly celebrated a second triumph on the bounce.

“There were some small things that made the difference in the end and maybe it was just two corners on the track that separated winning from coming second,” Seewer lamented before going on to talk about the intense vibe of his first ever home GP and a new experience in just three years of being a pro. “I didn't expect the Swiss public to be that great: so many people, flags…it was amazing to ride here. I didn't win, which would have been the small present to them and myself but I’m happy and I have three second places in a row now. I just need to find that last piece of the puzzle.”

Seewer was non-committal on his chances of giving Herlings a third taste of championship denial. The 22-year-old has been a distant second in the MX2 series all year but has now hacked the Dutchman’s superiority to just 43 points, although the next appointment on the calendar is Herlings’ home event and in the sand of Assen. Seewer has almost certainly hit his goals for 2016 (a top three finish) and his role at the centre of the Swiss whirlwind of revival will undoubtedly be the highlight of another year of emergence for this young talent, who has continued to ascend the pyramid of motocross without setback and shows no sign of slowing.

Best of the rest in Switzerland was Kemea Yamaha’s Benoit Paturel with a third podium of the season and in what is a difficult time personally for the young Frenchman while Rockstar Energy Husky’s Thomas Covington endured a few scrapes to manage seventh overall.

Grand Prix’s feeder channel—the EMX250 European Championship—worked in a literal sense in Switzerland with 2016 champion Thomas Kjer Olsen bouncing straight into MX2 and finishing eight overall. It meant that American (and also MX2-bound) Darian Sanayei was able to sail to his third victory from the ten rounds and confirm his runner-up status in the series. Red Bull Junior KTM rider Josiah Natzke managed his first podium of the season with a strong second place ahead of Suzuki’s Bas Vaessen—another youngster expected to convert European promise to Grand Prix aspirations in 2017.

In WMX Livia Lancelot was second to the returning Courtney Duncan (the Kiwi only back on the bike for two weeks but able to obtain her second spoils of a maiden season) and with a 27-point window over Nancy Van der Ven and one race remaining for the ladies the very first female world champion (back in 2008) looks set for another decent bid at a gold plaque.

MXGP has time to re-group with two free weekends in the lead up to the final round in Europe—on the impressive stage of the Assen road racing circuit in the Netherlands—and then the U.S. double header of Charlotte Motor Speedway and Glen Helen bringing the FIM World Championship to a close for the second year in a row.