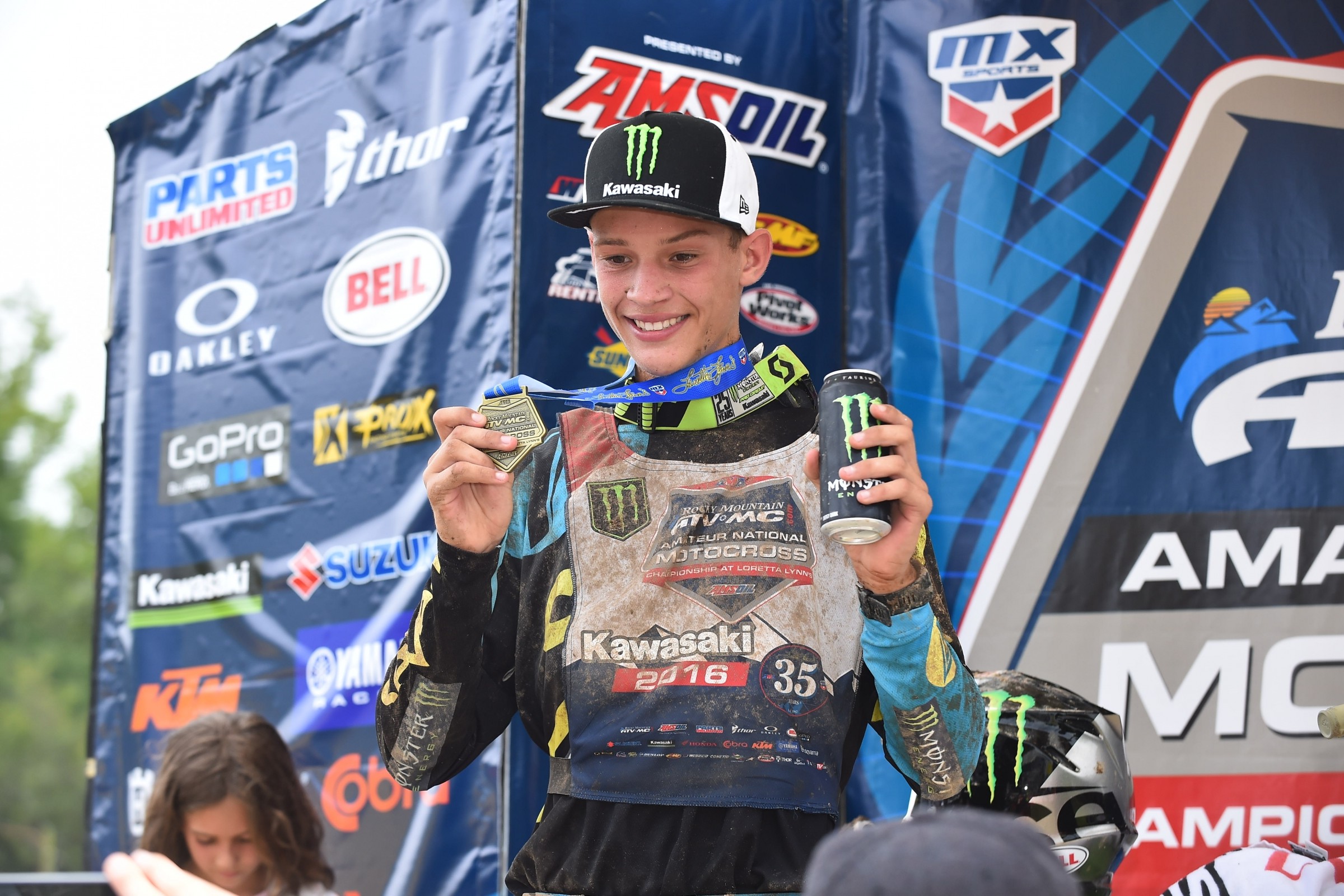 Jordan Bailey had entered the cross roads of his career. A dynamo at an early age—he notched two 50cc titles at Loretta Lynn’s Ranch —he had not won a championship at Loretta’s since 2012, on an 85.

His debut year in the B class last year was rough, so he knew this year would make him or break him. He made it, moving to the Millsaps Training Facility and upping his game, ultimately winning the 250 B and the Schooboy 2 (13-16) classes with consistent scores in his six motos—three moto wins, three seconds.

It netted him the AMA’s Amateur Rider of the Year Award, which goes to the top B rider. Next year Bailey will go A. After that? Read on.

Racer X: You’ve always been pretty good here. You’ve had success before, but it really seems like it’s next level this year.
Jordan Bailey: Yeah, I put a lot of hard work in this year. My whole team was behind me, Monster Energy Kawasaki. It paid off well this week.

When you make that transition to big bikes it has to be a little scary at times. Talk about what that was like.
It was my second year this year on a big bike. My first year was a little rough. I had an injury. I learned quick to respect the big bike and I learned well.

Is there pressure? I feel like in the B class that’s a huge fork in the road. We’ve seen guys do well and that gives them a factory ride all the way to the pros. So there had to be pressure, like this is the year you’ve got to do it.
Yeah, it was definitely a lot of pressure in order to have a successful future. I was ready for it and I did well here at Loretta’s and we’ll see what my future brings.

Do you know anything about the future yet? Did you have something set already?
There’s always [in general] “If you do good at Loretta’s, you’ll get something,” but we had some things worked out already if I had a good week here. So this was a big stepping stone for me. Can’t wait.

So it’s like a nice a little weight off the shoulders? You already know what’s next?
Yeah. Kawi, we have a great plan with them. Loretta’s is just really to see where you’re at and see how much can happen in your future. So that’s it.

Is it already set through pros or are we just talking A class right now?
There’s some of both that I can’t get into, but most of it is into the pros. I’ll probably only do another year of A class and move on from there.

I think what people worry about—because we’re seeing more and more B class riders get deals that carry them to the pros—is that the rider won’t even try that hard in the A class because his deal is already set. So just explain that. I’m sure you’re not going to not try!
Yeah, for sure. You have obligations with your team that you’ve got to get it done no matter what. Like I said, you get to a point in your career where you think you’re almost done because nobody’s looking at you, then all of a sudden one good race and everybody wants you. So if I had to say anything, you’ve just got to keep your head down and just keep working and you’ll see the results.

Did you have those down moments?
I had a few. They weren’t down, but I had a rough Spring Nationals. I was like, “Listen, I need to get it together.” I regrouped at Mammoth winning there, and then I regrouped here, so I made Team Green look good. It’s going to be a good year.

So this year, back in March it was tough?
Yeah.

So what changed?
I just started homeschooling and training full-time. It was shaky, but we just kept working, put our head down and it paid off.

What’s the day-to-day life there at MTF?
We work hard all week. It’s a program and definitely you have to be disciplined. You work hard, do school afterwards. You just kind of run that Monday through Thursday, or Monday through Friday, and have some time off on the weekends.

How many gate drops do you get in? Do you guys race some local stuff or is it just like five times a year at these big races? How does that work?
At MTF we’re racing a lot, doing motos together, but we go to the local Winter Ams and Gold Cup races. You can’t beat racing, so we just do as many as we can and fit our practice schedule correctly.

People might not think MTF was a big move for you because you’re from Florida, but Orlando is actually not that close. That was a big commitment.
Yeah, it’s four hours away. There’s a lot of great guys from Florida but you just got to get it done whatever way it works for you.

So what’s your parent situation? Did one of them move with you?
Yeah, my dad stays with me Monday through Friday at MTF. He’s my mechanic, my teacher, my everything pretty much. He does everything for me and I can’t thank him enough. So my parents made a huge sacrifice for me to live there. I can’t thank them enough.

How were the motos here? First of all, you had to deal with all this mud. You did a good job being consistent, but it was gnarly.
Yeah, it was intense for sure, a lot of adversity. We had a game plan going into it and made sure that we put myself in a good spot and then I did so. I’m happy I could get all the wins.

It seemed like you were really focused on the consistency part. We didn’t necessarily see some crazy lap time and then a crash. Was that really in the back of your mind?
Yeah, I just wanted to be consistent, be there. Not do anything stupid to put myself in a bad situation. If I had to get the speed, I would do it, but we had a game plan, like I said. The starts were key, and put ourselves in a good spot.

When it was raining some of these times, you were like, “Come on, man?”
Yeah, there were a few that it was just like, we can’t get a break. But it’s motocross and you never know what’s going to happen here at Loretta’s. I’ve been coming here ten years and you’ve got to get it done—dry, mud, whatever. You’ve just got to get it done.