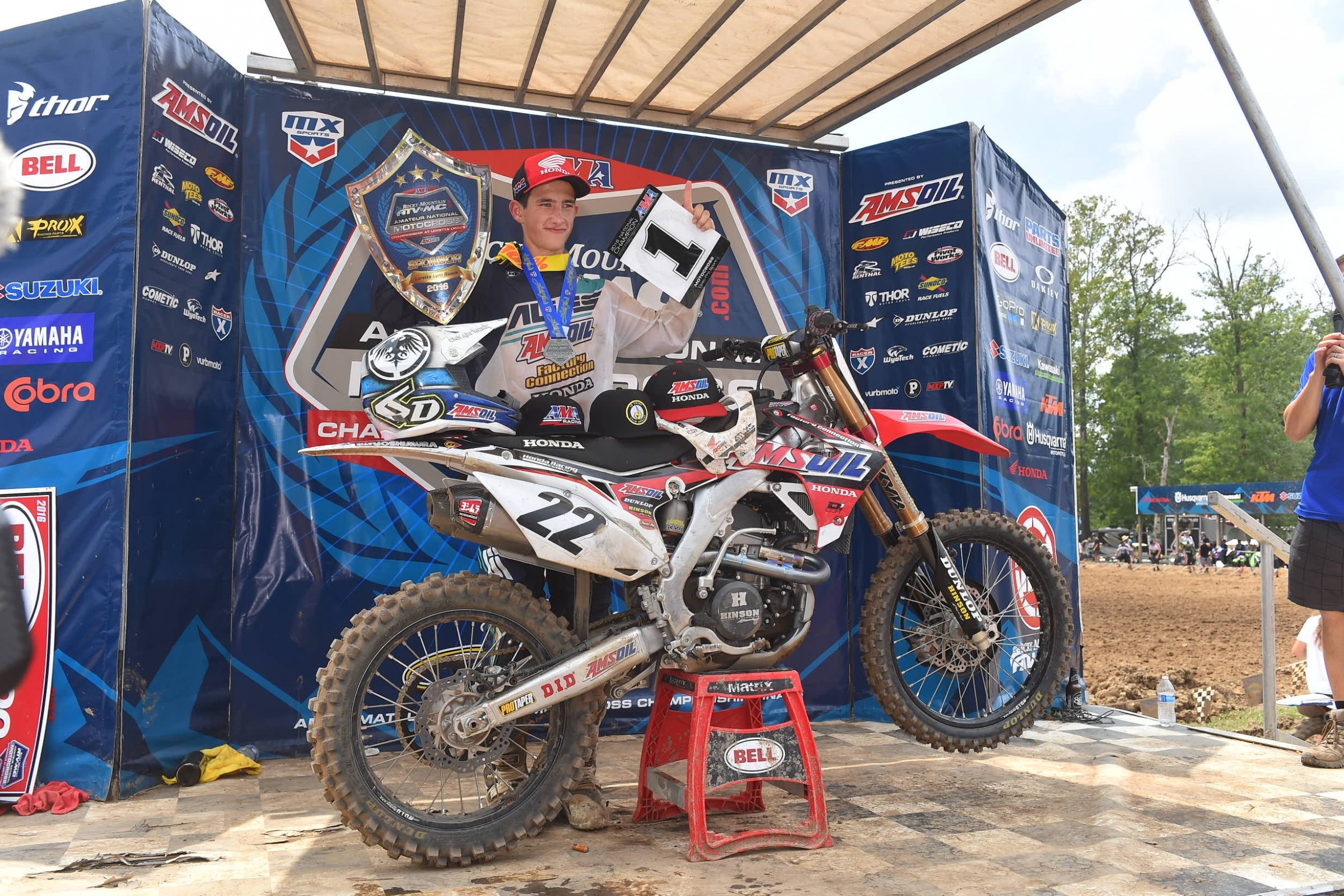 Factory Connection (GEICO) Honda is about to send another amateur star to the pro ranks with Chase Sexton, who notched the Open Pro Sport Championship and finished second in the 250 A class during a wild, muddy week at the Rocky Mountain ATV/MC AMA Amateur National at Loretta Lynn’s presented by Amsoil. He was also presented the AMA’s Horizon Award, which goes to the A rider expected to make the biggest impact in the pros. Sexton is in good company—Trey Canard, RJ Hampshire, Zach Bell, Matt Bisceglia and Justin Bogle all won the Horizon Award for this team.

Sexton will join his current teammates this weekend as he makes his pro debut at Unadilla. But after talking to him during Loretta’s closing ceremonies, it’s clear this won’t be the first time he’s on a track with professional riders.

Racer X: Well, here’s the standard question: What’s it feel like? What does it mean to win the Horizon award?
Chase Sexton: It’s cool. I’ve been thinking about it ever since I’ve been on 85’s, just seeing all the good riders win it. It’s crazy to be able to win that award. Just super pumped about it.

You've always had good speed here but it seemed like this time you really put all the pieces together. Have you even won titles here before?
Yeah, I won one title when I was on 85’s (9-11), but otherwise I’ve been second like four years in a row, I think. This year I was feeling really good coming into the race. I knew I could get it done. I had the speed, the endurance, everything I needed. So I just felt really good on the bike this week and we got her done.

Not only is the Horizon Award this great list of dudes, but the same thing with your team, they’ve always had premier amateur guys. So when you got that call to join them, that must have been good, too.
Yeah, for sure. The whole team, they’ve got a lot of the Horizon Awards. [Justin] Bogle and RJ [Hampshire], a lot of guys. I felt some pressure coming in because RJ was asking me… because I actually ran 22 which is what he was running when he was A. He won all six of his motos when he ran it here. So I got some pressure from him coming in here, but we got it done so I’m happy about it.

Yeah, what is the 22 thing? He had it. Your younger teammate Carson Mumford was running it this week. What’s that?
[Laughs] Actually Carson thinks I copied him on the number but my first number I tried for at Loretta’s when I was six years old was 22 but I actually ended up getting 21. 22 is the number I wanted. My favorite rider is Chad Reed and I just idolize him, so there’s no better number than him. His riding and everything, I just like him a lot.

Have you had a chance to bro down with Chad Reed? Have you met him? He’s here.
Wait, he’s here? I didn’t know that?

Well, actually, sorry, he was here. He was here on Thursday.
No, I haven’t met him actually. I want to, for sure. But 22 worked out this week.

When you get on this team, what did that unlock for you? Obviously they’ve done good things for other people, so did it change things for you?
No, not really. My program changed a little bit, training with the team trainer and stuff like that, and having Mike LaRocco a part of my program is a big help. But this year they’ve been a big part of my success. I think this is one of my best years so far. The pro team is going to be good. Just going to go in there and see how it goes.

Your schedule, are you basically on the pro team? Are you doing the same stuff as the pro guys?
For sure. I was in California a lot training with those guys for the off-season last year. I rode the whole supercross season just practicing for this year. So I’m on the same program. I recently moved to Clermont, Florida, so I’m down at the Nest with Kenny [Roczen] and Adam [Cianciarulo] and RJ. So it’s been good. We’ve been training hard.

Wow, so you come to Loretta’s after doing motos during the week with the 450 motocross points leader, maybe the fastest rider in the world right now? That’s good prep!
Yeah, Kenny definitely is the fastest guy right now, I think. He’s a good guy to train with, for sure. Good influence on me. He’s also a cool guy. I’m really happy I get to ride with him.

And the team has a cool thing with John Wessling, the team trainer. Out in California, you guys to get to work out in the race shop?
Actually they had a gym and then we recently built another gym. So we have two gyms in the shop. It’s just because Mike [LaRocco] is a big fitness guy so he wanted a gym in the shop for us to go work out in and we don’t have to go anywhere. It’s really nice. It’s convenient for sure when we’re in California.

So when you’re in California, you are motoing down and are you riding with those dudes, same track, same day as whoever, RJ, Christian Craig, or whoever’s out there?
Yeah, for sure. I know my speed’s there because we did scrimmages and stuff on the team in supercross and even motocross, so I know my speed’s there. And now I get to ride with Kenny every day. He definitely pushes me and I know I don’t really push him that much, but he pushes me.

I thought at one point there was a rumor you might have turned pro at Hangtown this year. Was that all up in the air? Did you know the whole plan this year or did it kind of change here and there?
Before Hangtown I decided that I wasn’t fully ready to go pro yet. I just had a little bit to mature, I think. I just told them I wasn’t ready. So they said I could do the last three. Since then that’s the plan and we’re going to do it next weekend.

So you think these three months extra here has made a big difference?
Yeah, for sure. I think I’ve matured a lot in these last three months. I got some stuff figured out with my bike, and also my head. So we’re doing good right now and I’m ready for next weekend.

When I talked to you when you first got on this team, you told me you were not a dude who was motoing down, twelve months a year nonstop your entire life. You were kind of on the rise here, unlike other guys who were doing this at five.
For sure. I lived in Illinois so you can only ride probably eight months out of the year. So I always had that break. We went south temporarily, but never really full time until now. But I think it’s helped me in the long run. I’m not burnt out or anything. I still love to ride my dirt bike. I think that’s a big key to success lately.

How do you think you’re going to do at Unadilla?
Right now I just want to get out front and run with those guys. A good start and I just want to sprint as long as I can, no matter what the circumstances are. I’m just going to go out there and leave it all on the track. That’s all I can do.