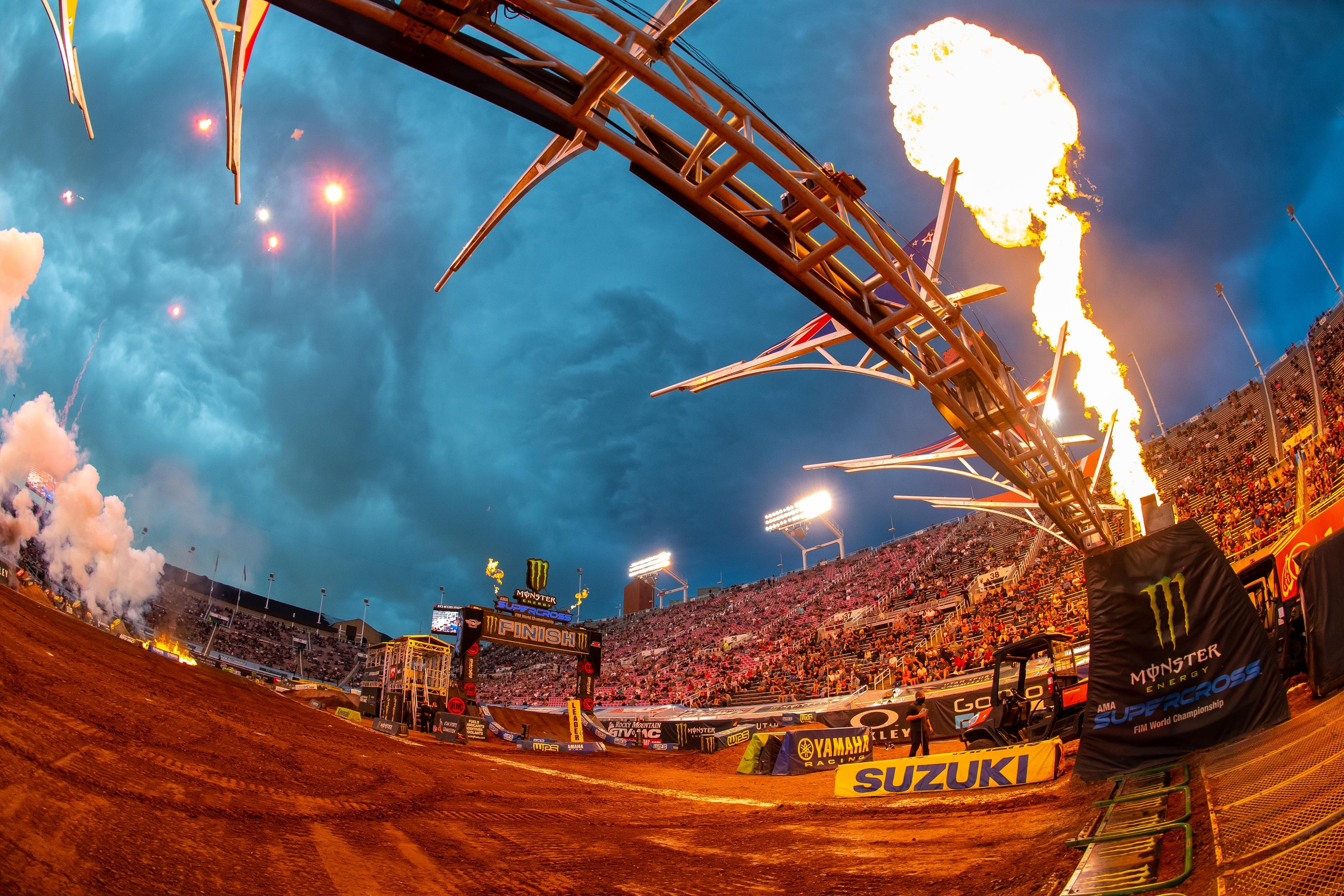 And then there was one. The final round of Monster Energy AMA Supercross goes off this Saturday in Salt Lake City, Utah. It’s been a long slog, criss-crossing the country multiple times. For those that travel to every round, it seems as if every Saturday is Groundhog’s Day. Bill Murray notwithstanding, it’s hard to not be jaded by round 17. Still, when the lights come on in northern Utah, everyone will still get those familiar chills. The series is a marathon, but the final sprint deserves everyone’s best and that’s what they are going to get.

After a very basic Denver layout, SLC brings a little creativity back to the fold. The start is the typical chute into a left hand 180. The interesting thing here is that most of the start straightaway is ridden backwards on every lap sans the start. A roller sets riders into a rhythm section that will end up being a triple, step-over-tabletop and double into the next netted 180 left.

A small double greets riders immediately on the exit of the double before diagonally crossing the start straightaway (and mechanics’ area). A quick bend to the left sets riders up for a fairly long whoops section but the lead in will be critical for entry speed. Riders will want to land on the middle/left of that first double and then stay right next to the mechanics’ area barrier, giving them the most obtuse angle to enter the coming whoops section. Carrying speed is often about geometry, meaning riders are always looking to open up the angles so that speed can be maintained.

Salt Lake City whoops are typically blitzers so riders will need to slow down through the last few as they approach the next 90-degree left. The finish line jump spans the northern width of the stadium before another 90-left sends riders down the home-team sideline of Rice-Eccles Stadium.

A stadium length rhythm section is up next but it’s fairly basic in design. With seven similarly built jumps and then a standard supercross triple, watch for riders to go 2-3-2 before the triple. The logic here is that riders will double from the inside of the corner, use that momentum to triple in the middle, and then scrub that speed (to flat landing if needed) over the final double in preparation for the upcoming triple.

Another netted 180 left is up next and immediately into a rhythm section back the opposite direction. This rhythm section could be done multiple ways but the main key to remember is that riders will want to use the final single to jump into the sand, instead of landing onto it. These clay-to-sand transitions can be nasty so watch for everyone to forego that entirely, jumping from the single and into the sand corner.

After exiting the 180-degree sand corner, riders will fire down the start straight in the opposite direction and into a flat, right-hand 180. Watch for the inside line to rule the day here, as riders will roll the first single and then double into the next 180 left. This section will be very one lined for the most part. The one exception could be if someone carried speed into the outside berm and either went 2-1 or tripled into the left. They would end up absolutely annihilating the rider they are passing but stranger things have happened. That 180 left leads riders back into the exit of the first corner and into lap two.

Jason Anderson will burn your hand right off if you try to touch him. He’s won three in a row and has looked dominant in doing it. Great season that feels a bit overshadowed by Eli Tomac’s title.

Malcolm Stewart snagged a runner up position, even if it was a bit muted due to Anderson’s win and Tomac’s hometown title clinch. Mookie has been his best version yet in 2022.

Mitchell Oldenburg is landing on podiums in the 250 class and the top ten in the 450 class. He and Kyle Chisholm are both doing great things in privateer land.

Hunter Lawrence just keeps on winning, even if it doesn’t result in a title. His improvement this season is significant. At bare minimum, he’s made serious money in bonuses this spring.

Eli Tomac is your 2022 Monster Energy AMA Supercross Champion. Even with a knee injury, that’s a reason to make this list under any circumstances.

Dirt Wurx had a tough Denver event, letting the track get away from them for the afternoon’s racing. It was the dustiest event we have seen in a long time. After so many incredible muddy-track salvage jobs over the years, it shows that no one is perfect.

Yes, Eli Tomac is on both lists. He is likely to miss this weekend’s SLC event with an Atlanta-sustained knee injury.

Justin Bogle has had a rough go lately, finishing outside of the top 20 in both Foxboro and Denver.

With a title on the line in the 250 West Region series, the red and blue teams sound their battle cry in. Honda trots out Vince Friese, Mike Alessi, Jett Lawrence, and Lucas “The Human Missile” Mirtl for their last-ditch effort at a title. Yamaha counters with known SLC saboteur Kyle Chisholm, Damon Bradshaw, and Steve “Holeshot Artist” Matthes. Just before the gate drops, Yamaha bosses whisper “250 points rules” into Matthes’ ear.

Logan Karnow picks up Only Fans’ superstar Bad Bhabie as a sponsor for SLC. With literally zero Lucas Oil AMA Pro Motocross Championship results to his name, Karnow is unable to use the “Cash Me Outside” phrasing but I digress.

While Las Vegas finale after-parties were some of the wildest on record, Salt Lake City offers rock climbing, mountain-biking, and granola sampling into the wee morning hours.