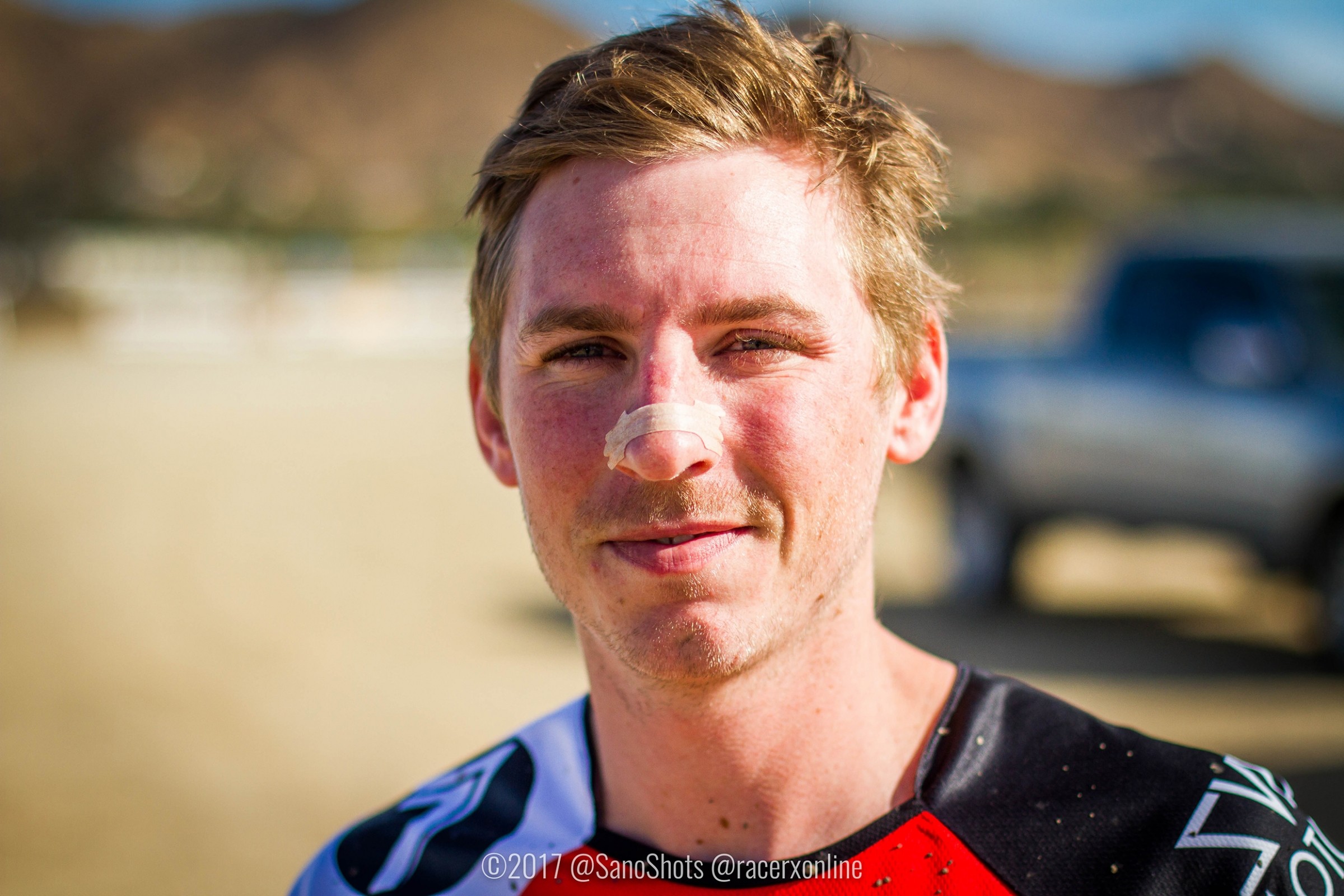 Back in September, news broke that Jake Weimer had crashed and incurred some serious injuries. Now, with the first round of the 2018 Monster Energy Supercross Championship looming, Weimer’s hard at work in an effort to be ready for the new season. Despite his recent injuries, he was able to get back on the bike last week for the first time. We got in touch with him for an update on his recovery.

Racer X: How’s it going, Jake?
Jake Weimer: Not too shabby. I’m a lot better than I was a month ago, that’s for sure.

It didn’t seem like your injury got talked about a whole lot. Tell us what happened.
We had a part failure, basically, which caused the crash. That was it. It was kind of like a worst-case scenario. The crash itself really wasn’t that bad, but it was going into a rhythm section. It wasn’t real high-speed or anything crazy, and I thought I was going to save it. I barely clipped the landing of a triple into a rhythm section, just barely clipped it, and it threw me over the bars and I smashed into the next takeoff. It was pretty tight spacing. The bike got me too. I guess I wouldn’t call it absolutely worst-case scenario, but it got me pretty good.

Surgery went well yesterday. Elbow was plated and I'm on the mend. Last night was absolutely miserable pain wise, my nerve block wore off wayyy faster than expected but I'm doing much better today. Up hill from here. Thank you for all the prayers ?. ? @kylecowling

Well, it doesn’t sound like it was an ideal situation either…
No, not at all. I ended up breaking my elbow, shoulder blade on the same side, 10 ribs, and collapsed a lung. I sustained a small fracture on my hand too, on the other side. It’s been a tough road from then on.

When did this happen?
September 15. I remember because the day before was my wedding anniversary. So, it’s been about 11 weeks since I crashed and I didn’t have surgery on my elbow for, I think, 10 days after I crashed. All things considered, the recovery side is going well. I still have some stuff to work on, as far as strength with my shoulder, and my elbow feels sore, but today was the first day I rode since I got released last week. I felt fine, but I have a lot of work to do. I still feel it. At least I’m back on a bike and getting some seat time.

At least it’s not like it’s two weeks until A1, right?
Yeah, but I don’t have much time. The goal is to be there, and I think I can. It’s not an ideal situation, but depending on the next few weeks, I think it’s possible. And if it’s not, I’ll wait until I feel like I’m ready to show up.

You mentioned the crash stemmed from a part failure. Can you say what broke?
I don’t really know. I haven’t asked, to be honest. We had a problem with the rear wheel, but we don’t really know. They ran the same setup the whole year and never had any problems. Everything was new, everything was good. It’s just one of those things. Sometimes stuff happens. It’s happened to me before, a handful of times with other teams, not MotoConcepts. It’s happened to most of us who have ridden our whole lives—we’re hard on bikes and sometimes stuff breaks. Sometimes there just isn’t a reason, or you never figure it out because by the time it breaks, it can be kind of hard to dissect and figure out exactly what went wrong. You just have to let it go. I trust those guys and they do a good job, so as far as coming back, you just have to put your faith in them and trust they’re taking care of everything.

Is it a confidence-killer when something breaks like that? Does it stick with you?
It can be. But like I said, I trust my mechanic, and Tony [Alessi] has done a good job. You just have to trust the people around you. If I didn’t trust them, it’d be a different story. It’s not the first time it’s happened to me; I’ve just gotten lucky in the past. You just have to put your confidence in the people who are helping you and move on.

Do you have any goals set for 2018, or are you focused strictly on getting on the gate for A1?
A1 is all I can really focus on right now. I’m building up my strength and getting things going again. Obviously the first step is getting more riding under my belt, then getting on a supercross track. Right now it’s riding, seat time, continuing therapy, rehabbing and building strength, then getting on a supercross track. The goals right now are small—one step at a time. I’ve been going to therapy four or five days a week, just trying to get ready so I can ride. It’s all I’ve been doing. Working out as much as I can, which has progressively gotten more and more, and therapy. That’s about it.

That sounds like a grind.
It can be. It was tough, too, because for a long time, it felt like it was not getting better. Then, finally, once I got over the hump, things started to pick up pretty quickly. But, man, for a while there it was just like, “This is taking forever.” But I just kept going and kept going and it started to come around. These last few weeks have gone really well and I’ve definitely made good progress.

You’ve been injured before, so you know what it takes to recover. But when you see yourself not making the same progress as you have after injuries in the past, is hard mentally to keep it going?
Yeah, it is. I’ve had some pretty bad injuries before, but I’ve never broken something like your elbow, a joint. That’s much, much tougher. Then you have to get movement back. When I started, my left arm was tiny, like nothing. I only had like 15 percent of full mobility, and it was just a lot of cranking on it to try to get mobility back. I’m probably 95 percent right now, and that might be all I get until I have the plate removed. I’ve recovered before, but it doesn’t really seem to get any easier.

You hear plenty of things about the Smartop/MotoConcepts team, but it can’t be as crazy over there as everyone likes to make it sound. What’s been your take on the team so far?
Before I even agreed to the deal, I had a pretty good idea of what I was signing up for. Tony has, admittedly, acted in ways that fans and media have talked about. But, honestly, he’s been awesome. He calls and checks up on me, he came and saw me in the hospital after I crashed, and I have nothing bad to say. I’ve grown up racing Mike [Alessi] since I was a kid, so I’ve known him forever. He does a good job with the team, that’s the truth. He’s a team manager and that’s what he does, he handles stuff. I haven’t raced with the team yet, but injury aside, my experience so far has been positive. They had a solid year with [Justin] Brayton last year too, and he re-signed, so I think that’s a good sign right there.

Glad to hear your recovery is on track. What else have you been up to?
My wife has a clothing brand, Twelve and Faye, and I help her sometimes when she needs it. I wasn’t involved much in the beginning, and I’m still not, but she’s got some men’s stuff going now. One day I asked her to make me a hoodie. I said I’d tell her what I wanted if she could make it with Twelve and Faye, and she was like, “Why don’t you design it and I’ll sell them?” So she gave me a sketch pad and told me to draw it. I’m a terrible drawer, but I drew it, she got it on the computer, and made these hoodies. It’s mellow right now, but she enjoys it and I think she does a good job.