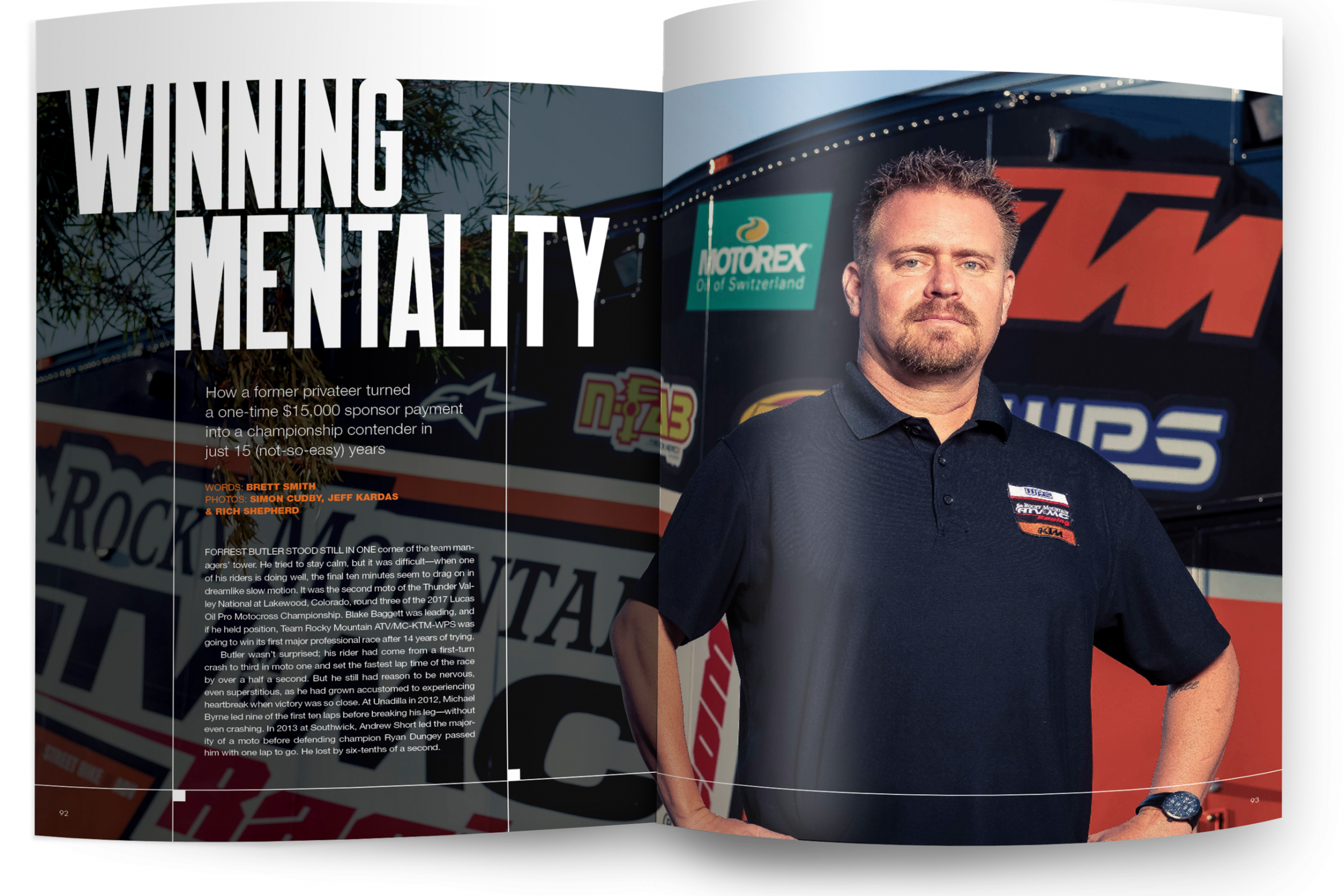 In the Mag, Winning Mentality

Pick up your copy of the February issue of Racer X Illustrated now and read about our talk with Ken Roczen and his comeback and why Red Bull Straight Rhythm needs two-strokes. Also read about Ping's day at Washougal for some 125 Dream Racing and Jerry Deleo, who owns and operates the factory test tracks for each of the Big Six manufacturers.

I was already scheduled for a trip to central Florida when I found out that Forrest Butler was now living in Orlando. At the time, an article about Butler and his business was already on the Racer X run sheet when Blake Baggett went out and won his first 450 Class overall in Lucas Oil Pro Motocross, also the first major victory for Butler’s Rocky Mountain ATV/MC-KTM-WPS team. It seemed like more than a coincidence.

Much has already been produced and written about Butler and the team he’s been building for over 15 years now. What’s left to be said? I remember visiting him in Gainesville, Florida, back in 2003 or 2004 at a laughably makeshift supercross practice track, where he and two of his younger brothers were living within the feel-good story of the day: three siblings chasing the dream of being professional dirt bike racers. A fourth brother wasn’t far behind them. The feature aired on SPEED Channel.

In 2007, Forrest’s racing career was behind him and he was running a legitimate race team, albeit one that was contending more for the Top Privateer award of the time, not race wins or championships. Recognizing that he was onto something special—that he wasn’t just another rich guy who wanted to run a race team as a fun hobby—I wrote a piece for Dirt Rider called “The New [BB]MX Business Model.” For the next 10 years, we kept in contact and chatted at the races. Before the 2017 Pro Motocross season started, Butler frankly asked me when I was going to write the next chapter.

As I walked into Butler’s den in his suburban-Orlando home, I saw memorabilia lining the walls, signed and framed jerseys, magazine articles set into display plaques, number plates, and helmets. The Dirt Rider article, however, is on a bookshelf in his office, with all the pages prior to the spread torn away. The remaining pages look tattered, indicating it’s been referenced and read more than once over the past decade. On the shelf below the wrinkled remnants of the magazine is the signed number plate from Blake Baggett’s Thunder Valley Motocross victory, which was only three days prior.

I come clean and tell Butler that, while I’m proud of him for getting his first win as a team owner, I still don’t know what the story is. “What’s my angle here?” I ask him.

“I want the continuation of your business piece from 2007,” he said. “You nailed it then when it wasn’t even a story.”

Flattered, but still dubious, we sat at a high-top table in his “man cave” and talked for hours. We had already been talking for hours before that, too; we talked on the way to Blake Baggett’s property, while we were there, and on the way back. Unfiltered, Butler unleashes a decade’s worth of details on me.

“Winning Mentality” is a raw look at how Butler (slowly) went from a band of brothers with one paying sponsor ($15,000 from MSR) to a real race team with OEM-direct support and a seven-figure race budget. It touches on the massive personal and professional hurdles he endured along the way and now, more importantly, where he goes from here. While he was once selling marketing, he’s now running a winning team. That might seem like a good problem to have, but it carries its own stress.

If Butler can continue to win races, and eventually a title, it could be the gateway to a major shift in how independent race teams are viewed in this sport.