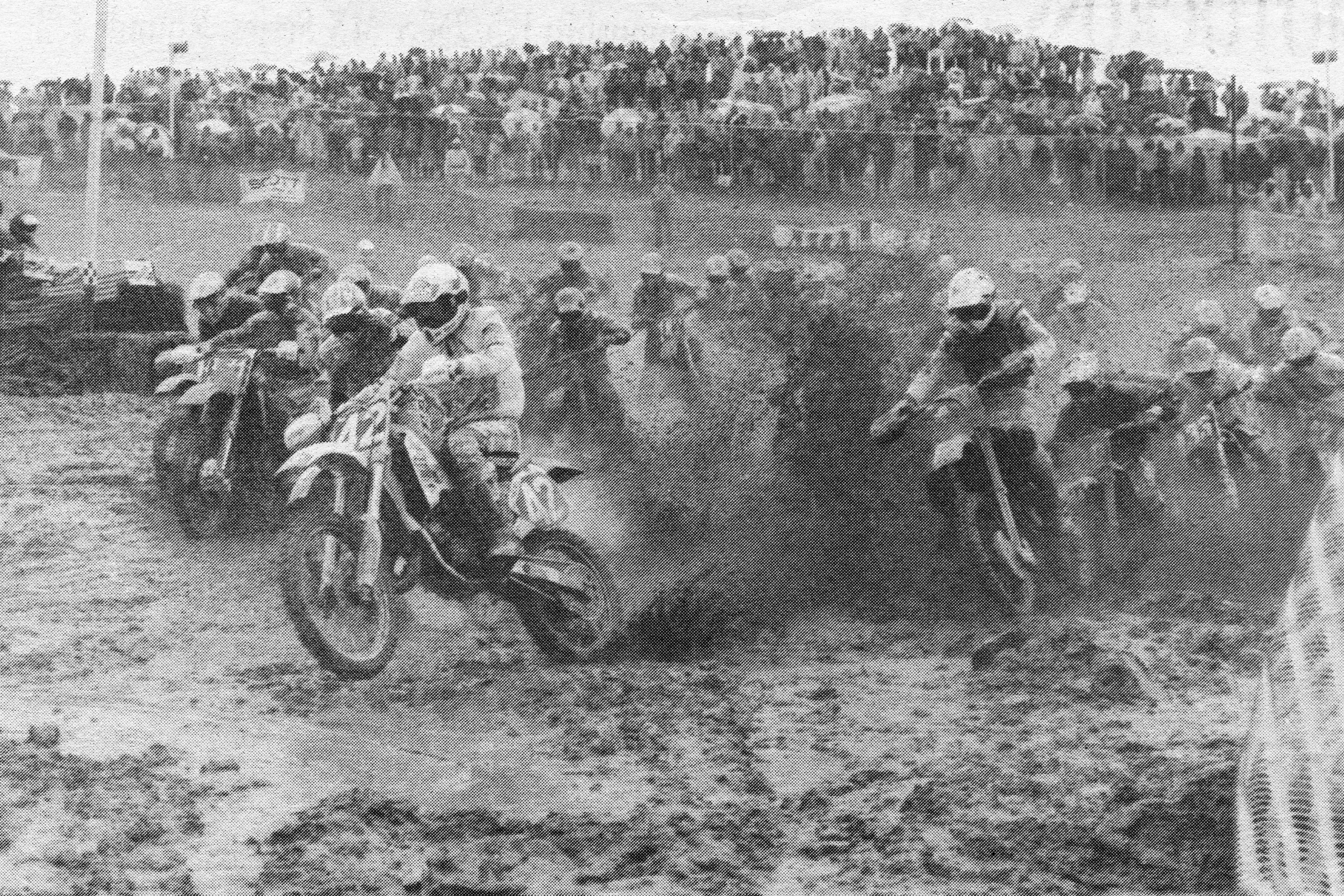 We're counting down the days to the start of the 2017 Lucas Oil Pro Motocross opener at Hangtown on May 20, with a look back at some of the most memorable motos in AMA Motocross history. This summer, you can watch all 24 motos on all of your devices on NBC Sports Gold. Today, we're looking back at Hangtown 1991.

Because Hangtown is the oldest race on the circuit, it’s had more chances to have more memorable motos than other national rounds. We’ve mentioned a couple of gems already, like the 1976 Hannah-vs-Smith showdown; the 2006 Carmichael-vs-Stewart-vs-Reed battle; and Eli Tomac winning his first-ever pro race in 2010. There are a several others that were classics, like the late-race tangle between rookie Bobby Bonds and incoming 125cc world champion Grant Langtson in 2001; Langston-vs-Alessi in the last turn in 2005; and the great Jeremy McGrath’s last 250 National win in 1998, just to name a few.

But the Hangtown National that may be the most memorable of all, as well as the most infamous, was the 1991 race. That was the year the Prairie City OHV Park was hit by a fierce rainstorm that absolutely swamped the event. The rain was so heavy and quick that the entire bottom valley—the heart of the racetrack—was consumed by the watershed that rose at a truly frightening rate. The area had been in a five-year drought, so the rain was welcomed—at first. But mud puddles turned into small ponds, the valley became a small river, and the race became one of survival for man and machine.

“Many of the top factory riders got together and urged AMA Professional Motocross manager Roy Janson and referee Ron Crandall to cancel the event, but they refused and the National was run on a rerouted course,” wrote Cycle News reporter Nate Rauba.

The rain got so heavy and the water in the valley so deep that Janson and the late Crandall made the unusual decision to call the race after each class had run their first moto, and for good reason: the 250 Class saw half the field’s bikes drown out in the water, including those of title contenders Jeff Stanton, Jeff Ward, Damon Bradshaw, and Jeff Matiasevich. That in turn opened the door to unlikely top-10 finishers, like fourth place Dan Janette, a privateer from Michigan, and seventh place Kelly Andris from nearby Stockton.

It was what happened at the front of the two packs that was unprecedented, and coincidentally wonderful, which is why this Memorable Moto consists of the first (and only) moto in either class.

The 250cc Class was even more crazy, as journeyman pro John Dowd, a Honda-mounted privateer who hailed from the same New England area as Henry, outlasted Honda’s Jean-Michel Bayle and Suzuki’s Mike LaRocco—the only two factory riders that finished—to win his own maiden win. Both Dowd and Henry used the wet-riding prowess they had picked up on the NESC circuit to navigate the Hangtown soup and keep their bikes alive, while so many others waded into the streams too quickly and filled their engines with water. Bayle, who was wearing a Jack in the Box table number atop his helmet so the scorers might better see him, seemed to slow up and let Dowd by toward the end, perhaps sensing that the officials would never throw a race out if a privateer won it, and also knowing that pretty much all of his championship competitors were stranded down by what had turned into a waist-deep stream.

“When I saw him (Bayle) I got psyched and picked up the pace a little bit,” Dowd told Cycle News afterward. “I wasn’t sure if Bayle knew I was in second. It seemed like he let me by.”

The 22 points Bayle gained on Stanton, Bradshaw, and Ward would make his job of managing the title much easier, and indeed he would go on to take Stanton’s #1 plate away by 26 points.

When the AMA officials did cancel the second motos, it meant that for the first and only time in AMA Motocross history, privateer riders had won not one, but two classes. It also proved to be the launching point for the AMA Hall of Fame careers of Doug Henry and John Dowd, who would go on to either win multiple championships (Henry) or set almost every age record for success that there is in supercross and motocross (Dowd).

“It feels great, I’ve never felt better,” said Henry, then 21 years old, after the race. “We run a championship series in New England and you can’t go and see if it’s a muddy day and leave. You have to race.”

Dowd was met at the finish line by his longtime local rival Henry, and together they celebrated their unlikely wins while the factory riders still grumbled.

“I have nothing to say,” Stanton replied to Cycle News’ Rauba after the race. “It was stupid, the whole thing was.”

“I sucked water seized like everyone else,” said Kawasaki’s Jeff Ward. “It was the same place, at ‘Niagara Falls’ in the back. Water was coming across so fast it almost took your wheels out from under you.”

It’s unprecedented in AMA Motocross that a race would be called after just one set of motos, but it also happened this year when MXGP went to Indonesia. The problem there wasn’t water but pure, sticky, and all but impassible mud.

One other thing: It was at Hangtown ’91 that Rad-N-Bad planned to shoot many of the shots for their new line of MX trading cards, known as the Hi-Flyers, but they could not have picked a worse day to shoot the races. But some of the very few color images of the race live on in packs of these rare old cards.

The Hangtown highlights can be found below at the beginning of the 1991 High Point National coverage. And while you’re on there, check out how close the first 250cc moto was at High Point that year, a three-way battle between Stanton, Bradshaw, and Bayle.