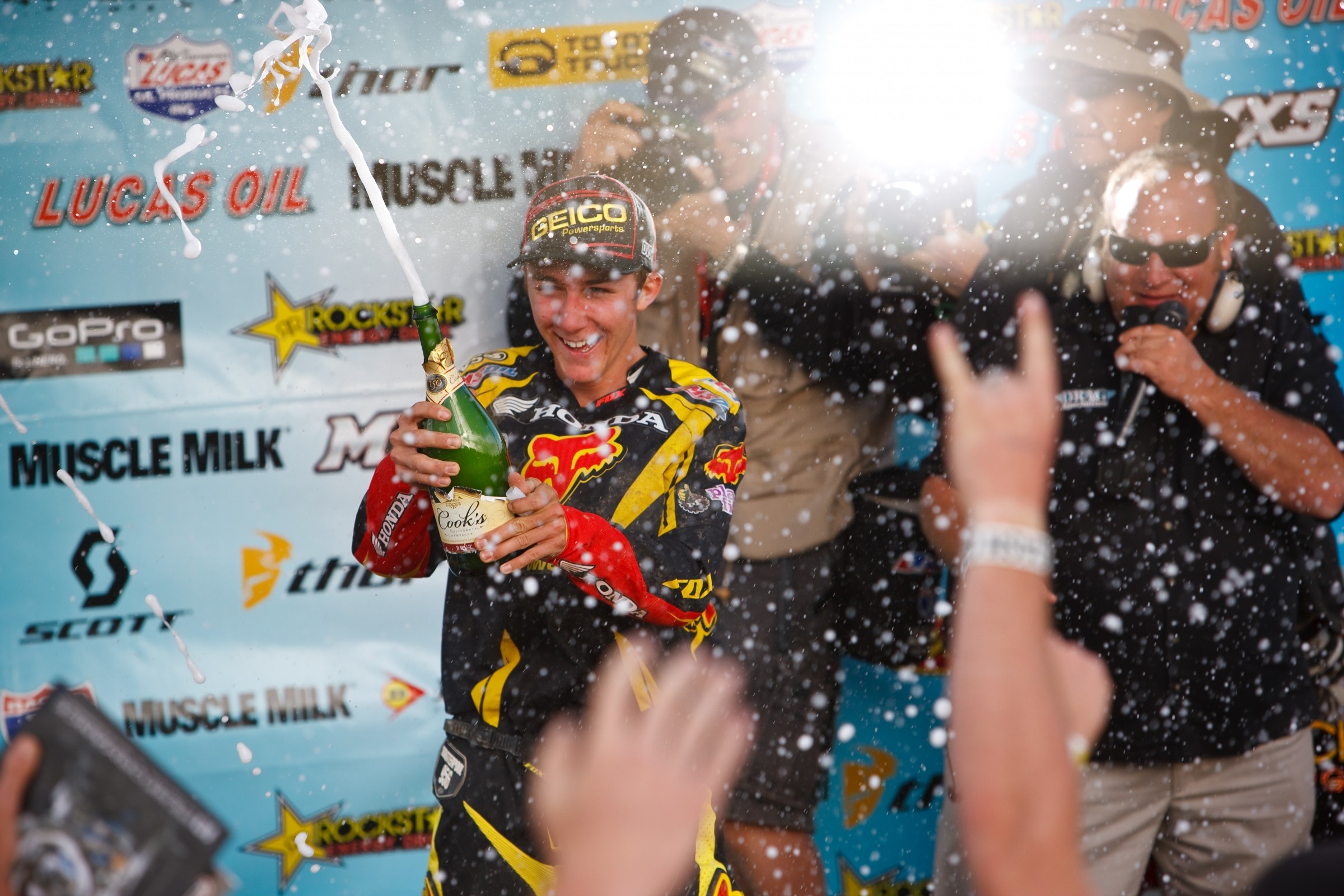 We're counting down the days to the start of the 2017 Lucas Oil Pro Motocross opener at Hangtown on May 20 with a look back at some of the most memorable motos in AMA Motocross history. This summer, you can watch all 24 motos on all of your devices on NBC Sports Gold. Today, we're looking back at the opening round of the 2010 championship.

During pre-race planning for the opening round of the 2010 Lucas Oil Pro Motocross Championship, SPEED TV color commentator Jeff Emig told the camera crew to get some shots of rookie Eli Tomac before the race. Emig, who had watched Tomac’s impressive amateur career quite closely, had a feeling Tomac might have the speed to get into the mix. Emig wanted to talk about Tomac during the intro to the show, and the crew needed a few shots of the young Colorado rider to use as B-roll under his audio.

Emig was correct that Tomac would be a factor throughout the day at Hangtown, and he actually ended up being a bigger factor than anyone could possibly have predicted.

Tomac, an eight-time Loretta Lynn champion, had decided to skip his final year as an amateur and turn pro at the opening round. A year earlier, his teammate Justin Barcia had done the same and led the first moto of his career for most of the race.

Tomac wasn’t quite that quick off the draw, as the opening holeshot of the year went to Trey Canard, with Christophe Pourcel, who was trying to overcome a tragic end to his 2009 championship, quickly taking the lead. Pourcel opened a gap early, as Canard, Tomac’s teammate on GEICO Honda, uncharacteristically started falling back through the pack, eventually coming home in seventh. Pourcel seemed to have the control of the moto, but fell a little past the halfway point. Who would inherit the lead from there? Tomac! He had worked his way to second, with Englishman Tommy Searle behind him.

Tomac didn’t seem fazed by grabbing the lead, and even extended it to around four seconds. Just as it seemed Tomac would cruise to the win in his first ever race, he made a rookie mistake and crashed, handing the lead to Searle.

“The first moto, I was pretty shocked, and the rookie kind of came out of me, I guess,” he told Racer X after the race. “I got a little nervous and I was a little tired, too. But I don’t think my mistake was because I was tired. Coming out of the turn, it bucked a little bit, and my front end was weighted weird, and there was a little rut going into the corner and I just dumped it over.”

Tomac’s mistake setup an epic final lap showdown between the former Grand Prix stars, as Pourcel had latched onto the back of Searle with a few corners to go, and the duo drag raced to the finish line, with Pourcel just beating out Searle by 1.6 seconds. Tomac would rebound to finish third.

The second moto holeshot went to Troy Lee Designs Honda’s Wil Hahn, with Honda of Troy’s Darryn Durham, Canard and Searle all in the mix. Meanwhile, Pourcel and Tomac were buried within the rest of the field. The race was quickly red flagged, though, as Blake Baggett and Drew Gosselaar were involved in a first-turn pileup.

On the restart, Hahn nailed his second consecutive holeshot. This time Tomac was off to a much better start, with Canard and fellow rookie Dean Wilson in tow. Searle was seventh, with Pourcel directly behind in eighth.

With Hahn leading, Tomac and Canard were engaged in a heated battle for second, with the veteran and rookie swapping positions a few times in the early going. Around the 25 minute mark, Tomac made an aggressive pass on Canard to take over second, which led to Emig saying: “Tomac, man, the youthful exuberance that he has, he’s going after the lead here.”

Tomac wasted little time getting around Hahn, as less than two minutes later he found himself in the lead once again. This time, Tomac wasn’t going to relinquish the top spot. The moto win would be his, but the only hiccup in the rookie winning his first career overall would come from Pourcel, who was quickly making his way through the pack, and trying to get to second, which would salvage the overall win.

At the halfway point, Pourcel had worked his way into fourth behind his rookie teammate Wilson and Canard. As the moto began to tick away, Pourcel, as we’d seen throughout his career in the second motos due to a career-threatening injuries sustained in his GP career, began to fall back. Eventually he was caught by a hard charging Broc Tickle, which seemed to ignite the Frenchman. He quickly turned things around and got by Wilson for third. At that point Pourcel had tied Tomac on points with a 1-3 against a 3-1, but the tiebreaker is decided by the best second moto, and well, you can’t finish better than first. In his first-ever race, Tomac became the only rider to ever to win in his pro debut at the national level.

"This goes beyond anything I could have hoped for," Tomac said after the race. "We came in here not really knowing what to expect. You hope you'll match up with everyone but until you get out there in a real race you never know. To win this race, my first with this team, is really something."

Ask by Racer X how his mom and dad reacted to the victory, Tomac said: “My dad really hasn’t been talking that much—he’s pretty much in shock—and my mom’s been making rivers with her tears, so that’s about how it is for them...”

The next week, at Freestone County Raceway in Texas, Tomac shot out to the early lead again and battled Pourcel, but the Texas heat sapped his energy, and he dropped way back. The rookie would struggle through the rest of the summer, but three years later he had the puzzle figured out, and won the 250 National Motocross Championship.

There’s an elite group of riders that can claim to be champions—but only Tomac can claim to have won his first-ever professional race.