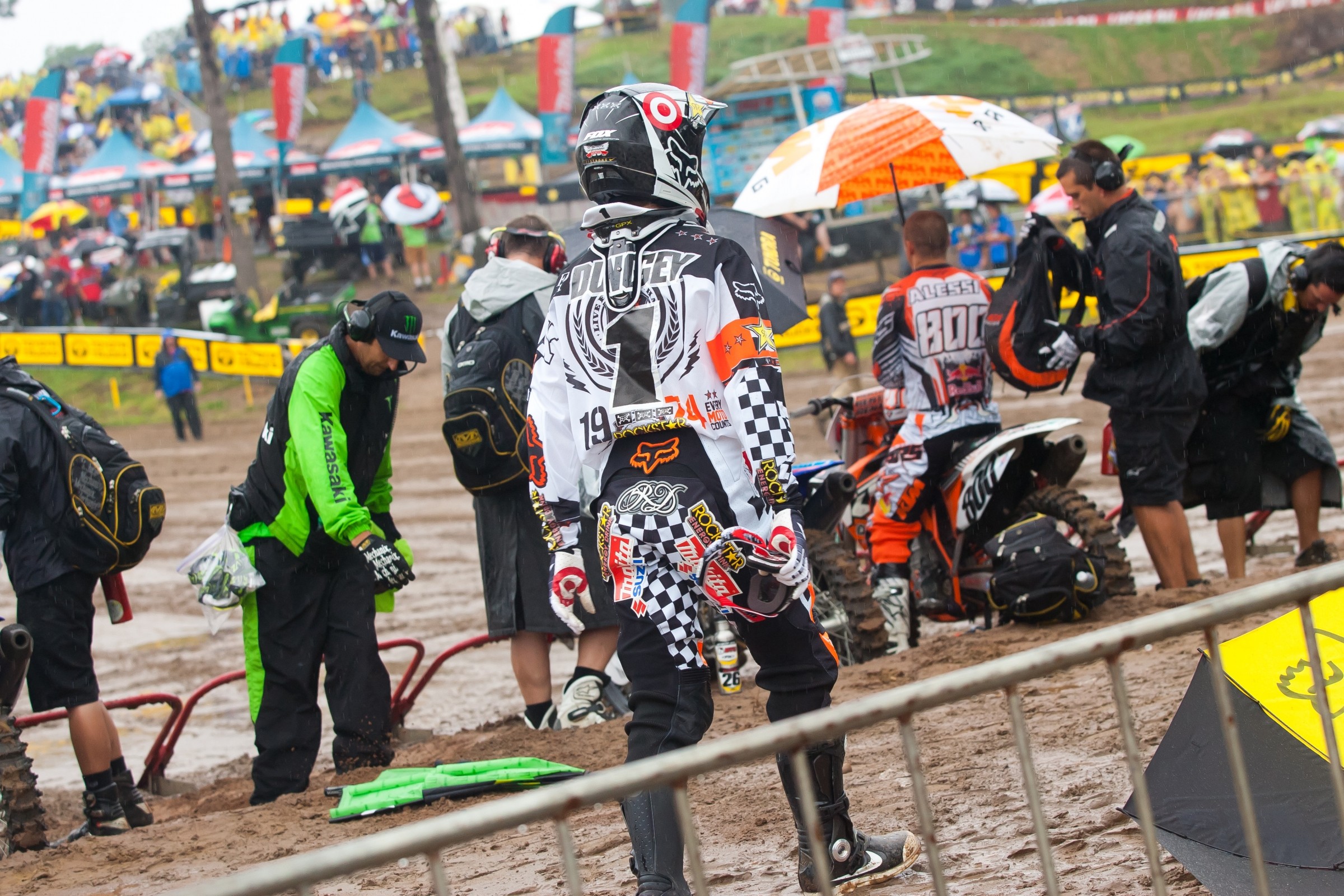 We're counting down the days to the start of the 2017 Lucas Oil Pro Motocross opener at Hangtown on May 20 with a look back at some of the most memorable motos in AMA Motocross history. This summer, you can watch all 24 motos on all of your devices on NBC Sports Gold. Today, we're looking at Ryan Dungey's incredible come-from-behind ride at Southwick in 2011.

From the opening bell, the 2011 Southwick National had an indescribable feeling surrounding it. With the eye of Hurricane Irene bearing down on the tight confines of Moto-X 338, an unknown (on the national scene) by the name of Mike Sottile captured the hearts of the locals by setting the fastest lap time out of the B Practice—topping future Hall of Famers Ryan Dungey, Chad Reed, and Ryan Villopoto.

Growing up an hour away in nearby Marlborough, Massachusetts, Sottile, like many of the proud NESC riders before him, used his local knowledge to carve through the deep sand of what is now called The Wick. With the hurricane nearing, Sottile went out in the first practice session of the morning and set a time of 1:55.58. Then the skies opened. The little-known full-time college student at the time had beaten out second place Reed by nearly a full second. (He beat Dungey by more than a second and Villopoto by more than two seconds).

“Those guys are at the top for sure, and putting in that ride was just awesome,” he told Racer X after finishing 28th overall on the day. “It seems like everyone from New England is loving it. But you know, I was looking forward to this race all week, and wanted to just get out there and put in a few real fast laps. I had good feelings all week, and knew it was going to be fun, but didn’t realize it was going to be that good.”

Yet, somehow, that day will be remembered for far more than a college student beating some of the most well established riders in the world.

Entering the weekend, Villopoto held a sparse seven-point lead on Dungey in the 450 championship. With rain hammering down, Dungey took advantage in the first moto, beating out his title rival by 2.9 seconds. Brett Metcalfe finished third, some 57 seconds back of Dungey. Justin Barcia, who at the time was a full-time 250 rider but was filling-in at factory Honda, ran third for much of the moto, but experienced a bike problem late and was credited with 36th.

The second moto was set to begin just like any other. Dungey left the Rockstar Makita Suzuki tent, walked down to the starting line and began to prepare for the start. But Dungey’s bike didn’t show up. After he started it before leaving, the bike experienced an electrical problem and since his bike wasn’t there, Dungey lost his gate pick—which was first due to his first moto win.

“It’s funny, the bike was running fine before I was ready to go out. I put my helmet on, took it off the stand, went to start it again and it didn’t fire,” he told Racer X at the time. “I ended up going down to the line to pick my gate, and they kicked me out of my gate when the bike didn’t show up. So I had to go down to the last gate pick, and I just waited….”

Dungey’s wait would grow longer and longer and longer. All seemed lost for the championship contender, as he began walking back to the pits and the gate dropped without him, with Barcia up front. Asked after the race if they should have held the gate longer—which would have been illegal according to the AMA rulebook—Dungey said:

“I don’t know. I’m not really a guy who reads the rulebook, so I don’t know how it’s supposed to work. The toughest part was the fact that my bike wasn’t there and I was picking my gate, and I thought as long as I was there that was good enough, but my bike wasn’t there so they kicked me out of that gate. So I had to pick the last gate pick. From there I just had to sit and wait. It felt like a half hour went by. I told my mom, when we were walking back, I thought it was over. I was pissed off. I was. I didn’t know what to think. I didn’t want to lose it like that. One thing, the way I live my life, I like to think of it as a test. From the Man above. I had to believe in what I do, and everything I ever believed in, to believe it wasn’t going to end like that.”

His bike showed up, finally, and he raced onto the track about three-quarters of a lap behind the field. In fact, he was almost immediately in danger of being lapped by Barcia, who had somehow taken the holeshot from a bad gate pick of his own.

As Dungey began to frantically pick his way through the pack, the battle for the overall was taking place as Barcia began to stretch his lead. Metcalfe, Dungey’s teammate at the time, had a chance at the overall, as he started fourth in the second moto. The Australian was trying to erase his own Southwick demons from a year prior when he ran out of gas while leading on the last lap of the first 450 moto. He would have to go through championship leader Villopoto for a chance at the overall, though.

He eventually caught and passed Villopoto for third—Villopoto appeared to be riding conservatively perhaps making sure he didn't run into trouble and lose points—and then passed second-place rider Justin Brayton for good measure. Behind 3-2 scores, Metcalfe scored his first, and only, overall of his career.

"I'm a winner now," exclaimed Metcalfe. "This career has been a roller coaster. After everything I've been through, to finally get a win after eight years just feels good. The first moto was the worst I've ever rode at Southwick, but I still got third. We prepared my bike for the mud in the second moto and it rode like butter. It was perfect. I knew I had to beat Villopoto for the overall. I saw him ahead of me, dug deep, and passed him."

Barica took his first career 450 moto win in only his fourth career 450 race, while Villopoto finished fourth behind Brayton and picked up a ton of points on Dungey…. Well, that’s not exactly what happened, as Dungey put in the charge of a lifetime—never getting lapped by Barcia—to finish seventh. He only lost one point to Villopoto on the day and even finished third overall behind Villopoto and Metcalfe to save his championship.

“Growing up as a kid, my parents told me don’t quit. As much as I wanted to take my helmet off and just chuck it somewhere, my mom said, ‘No, don’t do it.’ I’m glad I didn’t because I was still ready to race when they got me the bike,” Dungey told Racer X. “And I can’t take all the credit. The whole team, it was the difference between starting the race and not racing in it at all.”

Although he would go on to lose the championship to Villopoto, his ride that day at Southwick showed the heart of a true champion.