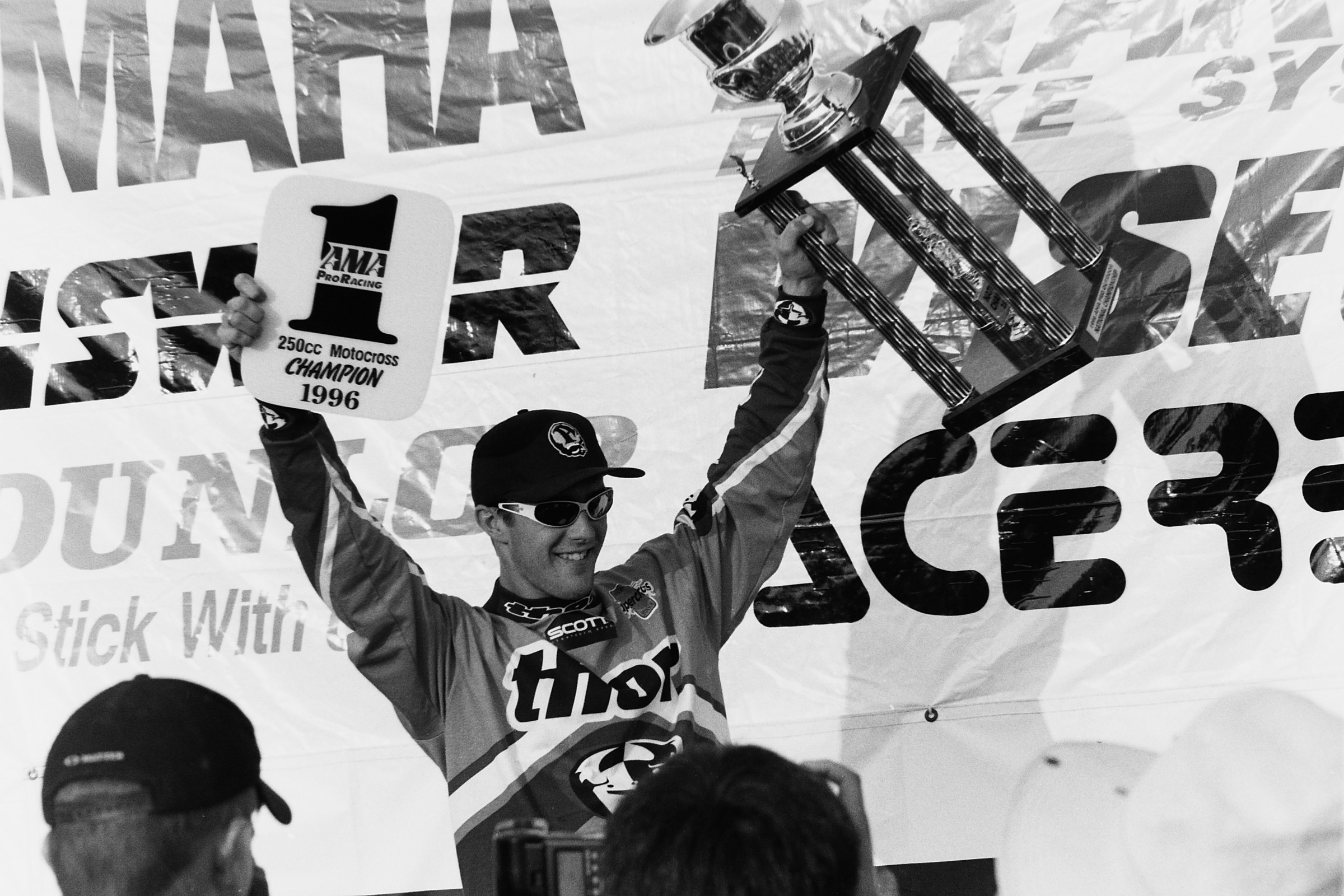 We're counting down the days to the start of the 2017 Lucas Oil Pro Motocross opener at Hangtown on May 20 with a look back at some of the most memorable motos in AMA Motocross history. This summer, you can watch all 24 motos on all of your devices on NBC Sports Gold. Today, we're looking at the final race of the 1996 motocross season.

Just like the 2017 Monster Energy AMA Supercross Championship, the 1996 AMA 250cc National Motocross Championship came down to the last race of the season, and two bitter rivals separated by just a few points. Unlike Saturday night, the grand finale in 1996 did not turn into something of paint-trading brawl, but more like a graceful dance between two legends, Team Kawasaki’s Jeff Emig and Team Honda’s Jeremy McGrath.

Most remember the ’96 season for the way it started: 13 straight AMA Supercross wins for McGrath as he put on the most dominant performances in racing history. McGrath was two races away from a perfect series when Emig managed to beat him to the finish at his hometown race, the St. Louis Supercross. Of course McGrath won the title—his fourth straight—and then turned his attention to successfully defending his 250cc Motocross Championship as well. He won the first three rounds (Gatorback, Hangtown, Glen Helen) and appeared well in control of the series. In fact, McGrath won five of the first seven races, losing to Emig only at High Point and RedBud. With four rounds to go McGrath was 46 points ahead before he made a rare and crucial mistake, injuring his ankle during practice at Spring Creek in Millville, Minnesota, by trying to jump a risky tabletop-to-tabletop section. Emig pounced on the chance to make up points and swept both motos while McGrath rode to painful 9-7 scores.

Emig picked up even more points a week later when he went 1-4 at Washougal while McGrath continued to struggle, finishing the first moto in ninth and pulling out of the second. That gave Emig the points lead. But Jeremy managed to get it together again at the penultimate round at Broome-Tioga with a 1-1 to Emig’s 2-2. Still, the Kawasaki rider had the points lead, albeit by just two points, going into the final round at Steel City in Delmont, Pennsylvania.

The first moto was the most memorable one. Emig grabbed the holeshot, only to be passed by McGrath on the second lap. Emig decided to immediately fight back, and the two came blasting down a fast, sloped hill with a ski jump to a flat landing. Emig kept it wide open and streaked past McGrath. Jeremy would later tell Cycle News of the move, “He psychoed back by me.”

“I knew it was all-or-nothing and I was ready,” said Emig afterwards. “Jeremy is so good on this track and I knew he was going to be 100 percent and be ready after last weekend (at Broome-Tioga). So I had to be fast and smart all day and not let the pressure to get to me.”

I wrote the event coverage on assignment for Cycle News that day and described the sudden re-pass this way:

“Emig went against his year-long trend of letting an early McGrath pass get under his skin and drain his confidence like a busted radiator. He stunned McGrath on the next downhill ski jump with a wide-open launch that nearly had him land on Showtime’s shoulder. He made the pass but seemed to leave himself open for an outside-in swing pass by McGrath, so Emig hit the brakes with both feet and held the inside line, causing some contact but neither rider fell. The whole scenario was a message to everyone else that he was playing for keeps this time.

“Then began quite possibly the best 250cc moto of the year as the two fastest riders on the planet rode off into the distance to settle the title themselves.”

The 30-plus minutes that followed was like watching a ballet. Every move that McGrath made, Emig countered, and though they were never more than a few bikes lengths apart, McGrath never got the chance to make complete a pass on Emig, even as they were slicing through the lapped riders. And when the Kawasaki flashed across the finish line one second before the 30-minute mark, it meant that this dance would last a season-long 38 minutes so they could get the mandatory 30-minutes plus two laps in. Emig held strong, and took the crucial three points away from McGrath, and for all intent and purposes, the title as well.

“One down,” said Emig after he came off the track. “I know I can win the title now with a second-place finish, but I’m here to win ‘em both. I feel like I am riding as good as I ever have and my Kawasaki is working great, and that’s what it takes to beat McGrath.”

“My bike was working good and I feel good but Jeff just had a good race,” said a gracious McGrath afterwards. “I was waiting for him to make a mistake or something but that just didn’t happen, then it seemed like every lapped rider got out of the way for him but not me. I’m not making excuses or anything because he rode really well, and now my job is going to be that much harder because no one else was even close to us.” McGrath was correct in that regard, as third-place Mike LaRocco was nearly 50 second behind him.

The second moto was something of a formality. Emig got the start again, McGrath got off back in 12th, and he never got close to the #2 Kawasaki KX250. In fact, McGrath would finish a distant third behind Suzuki’s Greg Albertyn, who had been involved in a first-moto pileup off the start and could only muster an 11th place finish.

“I pretty much knew what I had to do and went out there and got the job done,” Emig told Cycle News afterwards. “Jeremy has been superfast all year long and the only way for me to insure myself of the title was to go out and win both motos.”

“I can’t complain,” shrugged McGrath over losing the title. “I’ve had a great season and my Honda was great to me every time. Today, I guess it just wasn’t my turn. Jeff had the momentum today, I didn’t. He earned the win today.”

Two weeks later, Emig joined McGrath and his Honda teammate Steve Lamson on Team USA for the ’96 Motocross des Nations in Jerez, Spain. There, they would unite and work closely as teammates and put on one of the all-time dominant performances in the event’s history.