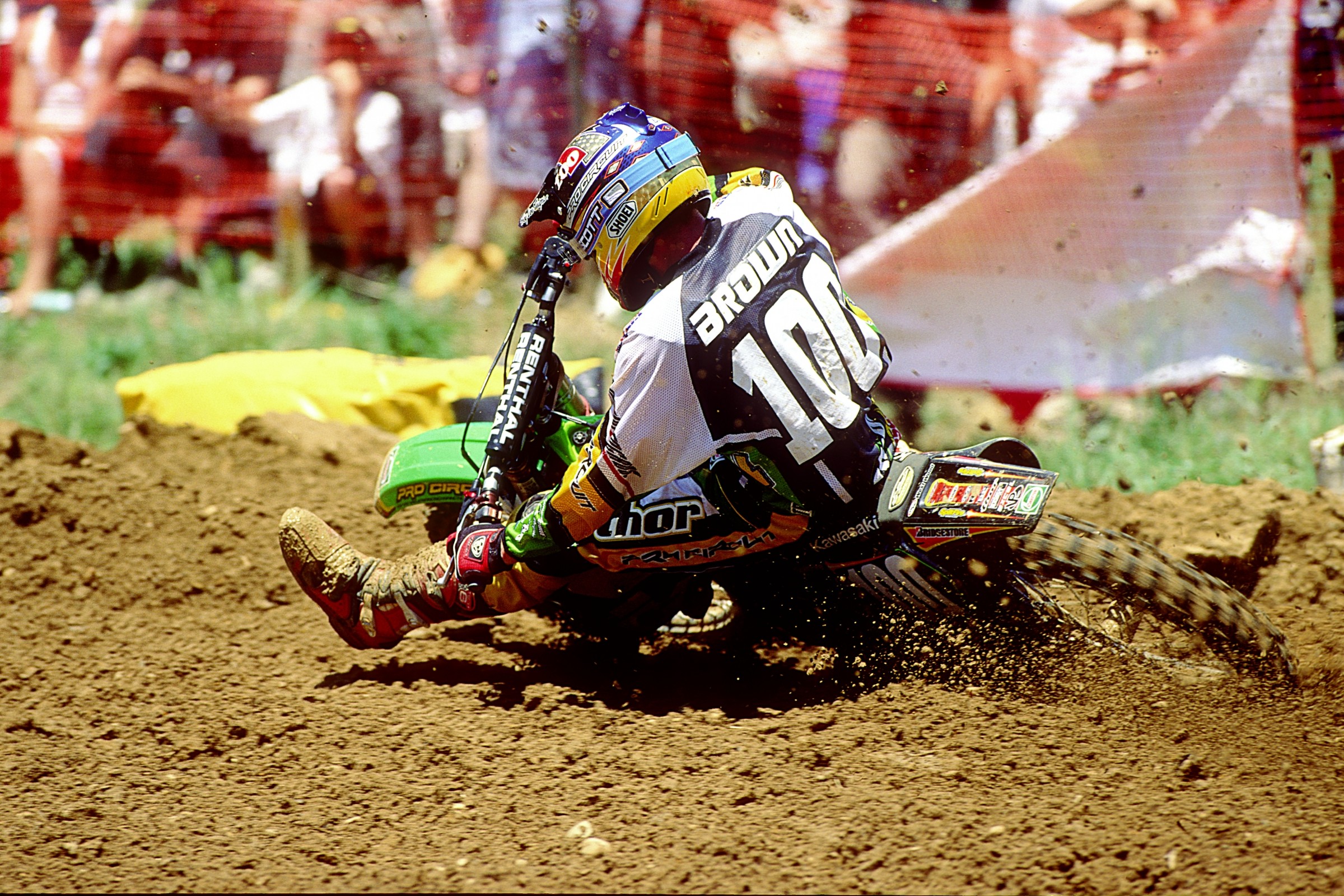 We're counting down the days to the start of the 2017 Lucas Oil Pro Motocross opener at Hangtown on May 20 with a look back at some of the most memorable motos in AMA Motocross history. This summer, you can watch all 24 motos on all of your devices on NBC Sports Gold. Today, we're looking at the insane 2001 season finale.

Mike Brown literally chased Grant Langston around the world for this title. In 2000, Brown, a veteran racer and American ex-patriot, was considered a top contender for the 125 FIM Motocross World Championship. His hopes were upended by a young, relatively unknown South African named Grant Langston, who showed rapid improvement to come from obscurity to World Champion by the end of the season. Then Langston packed his bags and headed for America … and Brown did as well.

For the Nationals, Langston’s sights were set squarely on Travis Pastrana, the 2000 AMA 125 National Champion. Brown quickly proved a capable third-wheel, and the three swapped raced wins, the points lead, as well as crashes, injuries, and dramatic moments throughout the summer. Even after Pastrana basically crashed out (while leading the standings) at Unadilla, Brown and Langston had no problems keeping the drama going down the stretch.

“We were talking crap on each other every week, but that’s just racing,” Brown told me recently. “He [Langston] would say something and then I would say something. But it was good—it’s entertaining and it’s good for the fans, too. All that bar banging, that’s the way it’s supposed to be.”

After Langston won a dust-up at Round 11 in Binghamton, New York, the KTM rider held a nine-point lead heading into the final round, at Steel City in Pennsylvania. If Langston could hold on, it would mark KTM’s first-ever U.S. motocross championship, so the brass came out in force to support their hero. It helped that KTM was still based in Ohio in those days, making Steel City a short drive for everyone in the company.

Over in Brown’s Pro Circuit pit, Kawasaki had a special guest of its own: Ricky Carmichael, having already clinched the 2000 250 National Motocross Championship, he was jumping back on to a 125 for the day. RC ended his 125 motocross career tied with Mark Barnett on top of the all-time win list. He wanted one more win to get the record. Oh, and Carmichael and Brown were both on Kawasakis, and had been training together all summer.

This led to accusations of coming team tactics, prompting Carmichael’s famous line to Langston, “I won’t even hit you as I’m going by.”

Anyway, Carmichael got a terrible start in the first moto and although he logged the fastest lap times in the races, he could only work his way back to third. This left Brown and Langston to settle it, and the rivals battled all the way to the final corner. Brown won, punctuating it by flipping Langston off as they went across the finish line!

“Some of the emotions got the better of me there,” said Brown to me when I asked him about this a few weeks ago.

Langston was still six points up heading into the final moto and only needed to finish third to wrap the title. Then Brown crashed about halfway through the first lap and got up around mid-pack, while Langston was around the top five. The KTM victory party was about to begin.

Brown never gave up. He kept digging and fighting, and for whatever reason, some of his competitors actually waved him by. Up front, Carmichael ran away with the moto lead and Langston tried to ride a safe race. He even had help with a KTM teammate, our own David Pingree, just ahead of him in third early. Pingree let Langston by, and soon Langston was in a podium spot and set for a title.

Brown was flying, though. He briefly fell again, got back up and went around Nathan Ramsey so fast that legendary TV announcer Art Eckman said, “I didn’t even have time to say bar to bar there.”

Eventually Langston worked his way up to second, but incredibly Brown was up to third and closing! The fans were bracing for some contact between them, especially after watching Brown’s flip off from moto one. However, another issue soon took the focus: Langston’s wheel was starting to fall apart.

Yes, by the time Brown caught Langston, the rear wheel on Langston’s 125SX was wobbling and shaking as he went around the track. Brown went past, Langston started rolling jumps, and soon it was clear: Langston wasn’t going to be able to finish the moto. With a few laps left, Langston’s wheel finally gave up, he pulled off the track, and broke down in tears.

The drama wasn’t quite over. Brown was set to win the overall with a 1-2, so he actually slowed way, way down to let the third place rider, Branden Jesseman, catch him. Brown waved Jesseman by, and thus dropped to a 1-3, letting Carmichael’s 3-1 take the overall and the new all-time 125 record. Nice payback for letting Brown ride and train at his house all summer, under a new trainer to the sport named Aldon Baker.

In the first moto, Brown crossed the line flipping off Langston. In moto two, he crossed the line pumping his fist, and then he broke into tears. For Langston, tears of sadness. For Mike Brown, pure joy.