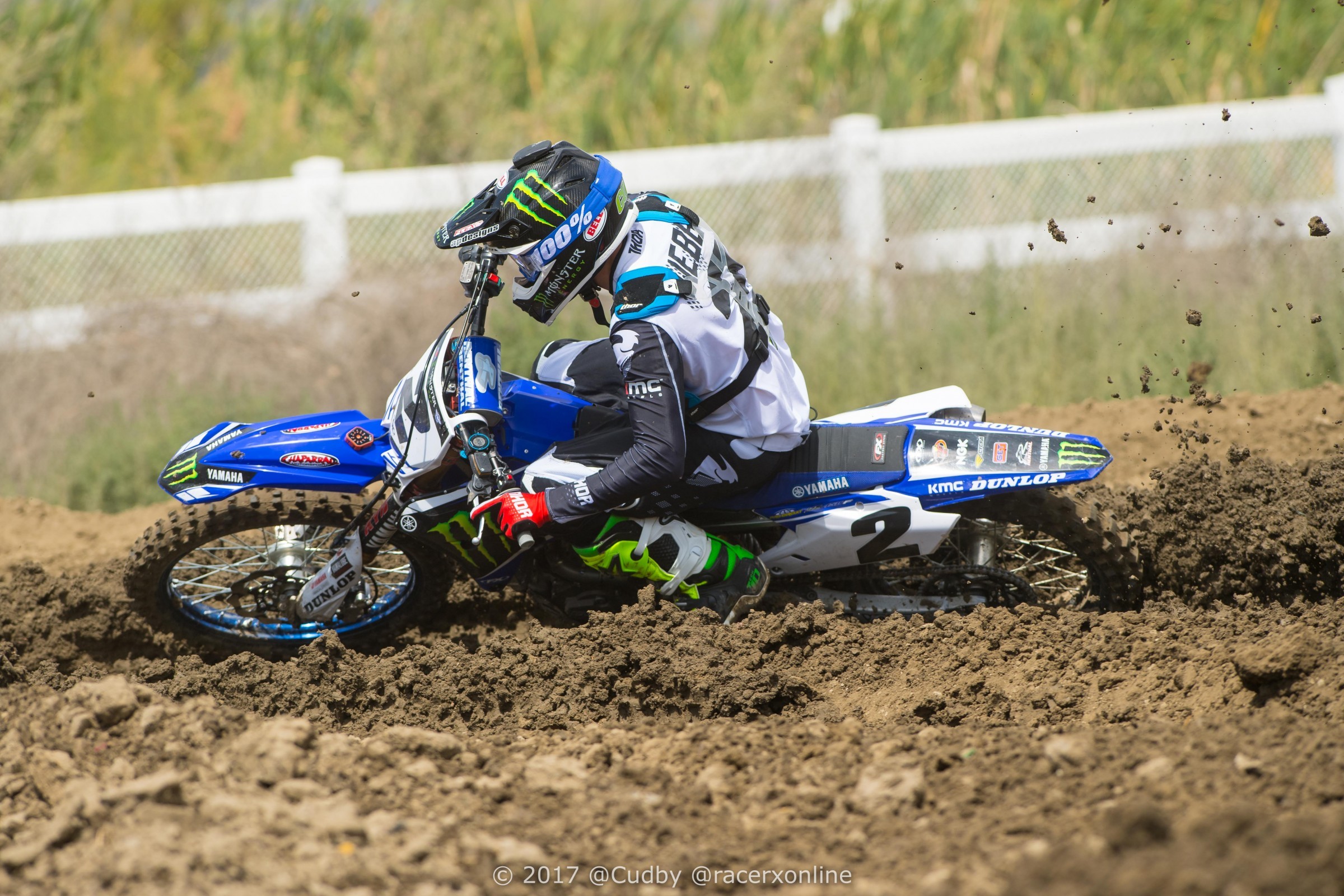 The opening round of the 2017 Lucas Oil Pro Motocross Championship begins this weekend, and while most of the teams remain the same from Monster Energy Supercross, there are a few changes—i.e. supercross-only teams like Smartop/MotoConcepts are out for the summer.

This guide will serve you well heading into the weekend.

Notes: The winner of 20 of 24 motos in 2016 will miss the entire summer due to a devastating arm injury suffered in Monster Energy Supercross. Last year with Suzuki, Roczen dominated the class, finishing first or second in 23 of 24 motos. His worst finish—fourth—came when he suffered a mechanical while leading the first moto at Glen Helen. This off-season he signed with Honda HRC and won the opening two rounds of supercross before suffering his injury.

Notes: Seely only competed in five rounds in 2016 due to a badly broken finger, which required a plate and four screws. He had two moto podiums and finished top 10 in all 10 motos competed in last year prior to his injury.

Notes: Craig will return to the 450 Class as a fill-in for the injured Ken Roczen. He spent the first four years (2011-2014) of his career racing the 450 in Lucas Oil Pro Motocross before announcing his retirement. Since returning to racing, he’s spent time in the 250 Class with GEICO Honda. He missed all but two rounds in 2016 due to injury. His best finish in 450MX points was 15th in 2011, his rookie year. His best overall 450MX race finishes are a pair of sevenths.

Notes: Last year was his first with Kawasaki, and Tomac played second fiddle to Roczen for most of it. He did win three motos, including a 1-1 sweep at Southwick, and was clearly the second best rider when Ryan Dungey went down with injury. Tomac ended the year with two MXGP overalls, and nearly won his first Monster Energy Supercross title earlier this year. With Roczen and Dungey out, Tomac is the clear favorite in 450MX this year.

Notes: In an effort to be healthy for the 2017 season, and with a deal already in place, Grant pulled out of the series last year after High Point to have surgery on both ankles. Grant is a great second rider behind Tomac, and should contend for podiums this year. Watch out for him at Glen Helen—he’s crazy fast in the hills.

Notes: In his rookie season, Musquin really found his stride late in the season, finishing second or third in eight of the last 12 motos. While he never got a win—Roczen and Tomac accounted for 23 of 24 motos wins—he was a weekly podium contender. With Dungey announcing his retirement earlier this week, Musquin is the number one guy now at KTM.

Notes: In his final year with Honda, Canard missed eight rounds in 2016. He signed with Red Bull KTM this off-season and missed the majority of Monster Energy Supercross. He sustained a broken collarbone testing for the Nationals, and will now miss the opening round at Hangtown.

Additional Notes: Earlier this week, Ryan Dungey announced his retirement from racing effective immediately. He will not compete in Lucas Oil Pro Motocross this year.

Notes: What could have been for Baggett last year. He started the season with a third in the opening moto—even passing Tomac to grab the position—but sustained a shoulder injury in the next moto and never fully recovered. He missed all but five rounds in his final year with Suzuki. He switched to the Rocky Mountain ATV/MC-WPS-KTM team this season and logged a successful supercross season. Baggett is a dark horse heading into Lucas Oil Pro Motocross.

Notes: After spending last summer in Canada, where he won the MX1 (450) overall, Millsaps was scheduled to race Lucas Oil Pro Motocross for the first time since 2012, but instead will undergo surgery to fix the injuries to his wrists that have given him trouble all season. He could return late in the season, but no official timetable has been announced.

Notes: The Missouri native was the surprise of last season, finishing sixth in 450 points en route to AMA Rookie of the Year honors. Due to a shoulder injury sustained in supercross, Bloss is expected to miss the first four rounds of the championship.

Notes: Alix spent last season racing the MX2 Class in the Canadian Nationals. When Bloss went down with injury, Alix picked up a fill-in ride for supercross, which will transfer over into Lucas Oil Pro Motocross where he’ll ride the 450.

Notes: In the last two seasons, Wilson has only raced eight rounds of Lucas Oil Pro Motocross due to knee injuries. Coming off his first full supercross season on a 450, Wilson will enter Lucas Oil Pro Motocross healthy for the first time in his 450 career. His best finish last year was sixth overall at Budds Creek, his fourth race back from injury.

Notes: Prior to breaking his collarbone after Round 4 at High Point, Anderson had four podium finishes in eight motos. He returned for the final round last year and went 5-5 before putting in an epic ride to win a moto at the Motocross of Nations, only to be landed on after the finish and miss the remainder of the event.

Notes: The long-time 250 veteran will make the jump to the 450 Class this summer. He did try a 450 in 2015 at the Oakland Supercross, but has yet to compete on the bigger bike outdoors.

Additional Notes: Christophe Pourcel, who started the year on the team, is racing the Canadian Nationals this summer for Husqvarna.

Notes: After dislocating his wrist and perilunate, breaking his ulna and tearing tendons off his bone, which sidelined him for 14 rounds of supercross, Peick will be back for the season opener, although he may not be quite at 100 percent.

Notes: There’s a chance Nicoletti will be able to race a few Nationals at the end of the 2017 Lucas Oil Pro Motocross Championship after dislocating his ankle, shattering his heel, and fracturing his lower fibula on press day at the Arlington supercross.

Notes: Although he wasn’t able to get back to his winning ways of 2015, Barcia did have six moto podiums last year, which included four straight to end the year. After suffering a wrist injury prior to supercross, Barcia struggled in his first year on a Suzuki. Entering outdoors healthy, expect a stronger season from BamBam.

Notes: In his first 450 season in 2016, Bogle missed the final five rounds due to injury. He made the change from GEICO Honda to RCH/Yoshimura Suzuki during the off-season.

Notes: Tickle was just coming into his own last year—grabbing moto podiums at Tennessee and RedBud—before suffering an injury at Millville and missing the rest of the season. He sustained a wrist injury late in the supercross season, which forced him to miss the final two rounds, but is expected to be ready for Hangtown.

Notes: The defending 250MX champion enters his first season in the 450 Class with a ton of hype. He struggled at times in his first supercross season, and missed five rounds due to a shoulder injury. Steve Matthes recently reported that for the last six weeks Webb’s primary focus has been testing for motocross. He could come out firing at the opener.

Additional Notes: Chad Reed was signed to a supercross-only deal and will not compete in Lucas Oil Pro Motocross.

Notes: Under a privateer effort in 2016, Harrison opened eyes with some strong rides—six top 15 finishes on the year. He filled-in for the CycleTrader.com/Rock River Yamaha team in 250SX this year and moves to the 450 for outdoors.

Note: Tommy Hahn, who began the year with the team, has retired from racing. Alex Ray, who filled his spot for supercross, was on a supercross-only deal.