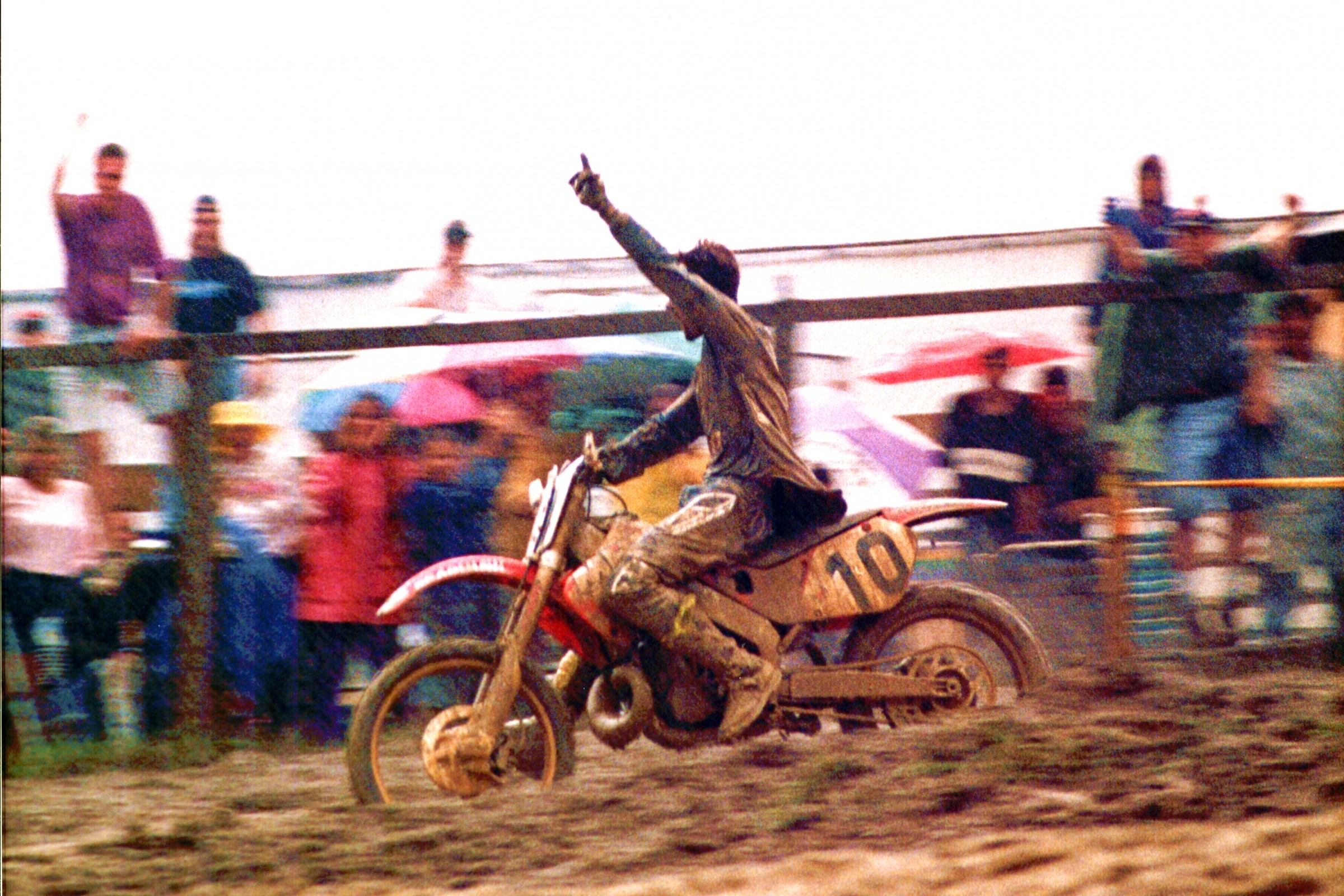 We're counting down the days to the start of the 2017 Lucas Oil Pro Motocross opener at Hangtown on May 20 with a look back at some of the most memorable motos in AMA Motocross history. This summer, you can watch all 24 motos on all of your devices on NBC Sports Gold. Day two, Damon Bradshaw is back...

High Point 1997. Damon Bradshaw wasn't going to get there. The dizzying heights that seemed inevitable—the next Hannah!—somehow fizzled out in the most bizarre way. He didn't get hurt, he just lost it! Damon, a podium rider in the premier SX class at age 16, a premier SX class race winner at 17, holder of the all-time single season SX win record by age 19, suddenly became burnt out and done with racing, and promptly retired when he should have been in his prime.

But he came back.

His return in 1995, and the 1996 season, featured a few highlights, but the lead pack had moved on, and Bradshaw was reduced to the occasional podium. After the full 1996 season failed to relight the old fire, Yamaha, his long-time backer, moved on.

For a moment, that seemed like the best thing ever. Bradshaw bought a Honda and started blazing through the off-season races. He set up his own team with Manchester Honda, the new 1997 aluminum-framed Honda looked awesome, he was ready—but again, the wins never came (we later learned that aluminum Honda wasn't all that great either).

By the summer of 1997, Bradshaw was again just an occasional podium guy, including the first moto at High Point, his favorite track, where he finished third in a muddy first moto.

Then it kept raining. Raining and raining and by the second 250 moto, most of the riders were just trying to survive. Bradshaw was up to second, and he only needed to pass race leader Larry Ward to win the moto and the overall.

"My goggles were gone and I was almost blind, but so was everyone else," said Bradshaw to Cycle News later on. Bradshaw decided not to stop for goggles as he had done in the first moto. "I figured if I just kept digging deeper and deeper it might work out my way."

The fans sensed it, and Bradshaw did, too. He dug deep, he found his old aggression and charged through the slop. When he caught Ward, he simply pinned it through the lake that had formed behind the High Point starting gate, and took the lead.

"I waited and waited and he finally gave me the room," Bradshaw would say later of his last lap pass. "I'm glad it happened where it did, because when it rains like this, it's really hard for us to put on a show. But the way things turned out today, I feel like we gave these people their money's worth. I would like to thank all these people who stood in the mud and rain and waited in line to see this race and cheer us on. This has been the sweetest win of all."

The High Point fans, no strangers to Bradshaw wins or bad weather, partied like it was 72 and sunny, and Bradshaw came across the finish—aptly named Bradshaw Boulevard—with the win. He was mobbed.

"It's all been worth it, every damn minute of it!" Shouted Bradshaw in the winners' circle surrounded by fans who swarmed the track after his shirtless victory lap. "I never stopped believing in myself and my team, and my fans never stopped believing in me. I thought the greatest win in my career was when I won my first supercross in Charlotte in front of my hometown crowd, but this one feels far better. I can't even begin to tell you how good this feels."

It was the last win of his career, as Bradshaw retired again at the end of the 1997 season. He didn't reach the expected heights, but he'll always have High Point.

Visit again tomorrow for another of the 24 Most Memorable Motos in Lucas Oil Pro Motocross history.