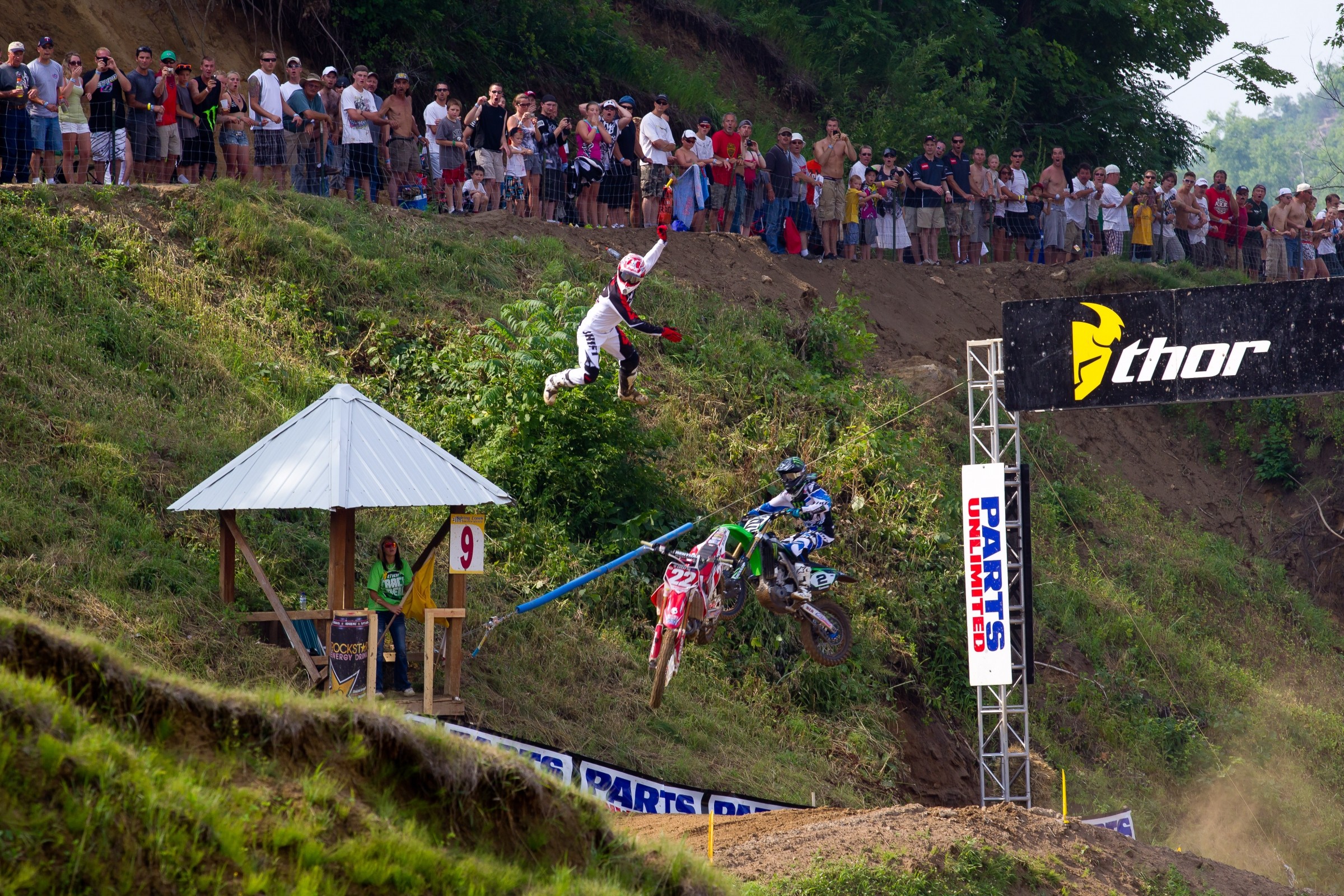 We're counting down the days to the start of the 2017 Lucas Oil Pro Motocross opener at Hangtown on May 20 with a look back at some of the most memorable motos in AMA Motocross history. This summer, you can watch all 24 motos on all of your devices on NBC Sports Gold. Today, we're looking at Millville 2011.

The 2011 450 Class in Lucas Oil Pro Motocross was shaping up to be one for the ages. Coming into Round 7 at Millville, Minnesota, Chad Reed, riding for his own TwoTwo Motorsports team (and on a factory Honda), was fighting off the “kids”—Monster Energy Kawasaki’s Ryan Villopoto and Rockstar Suzuki’s Ryan Dungey. The Ryans were right behind all summer long, but Reed, the 2009 450MX Champion, wasn’t letting them break through. But with Millville being Dungey’s home track, the pendulum was expected to swing to the Suzuki rider.

Reed had won Round 6 at RedBud with 1-3 scores over Dungey and extended his points lead to 16 over Villopoto. The series was shaping up for a three-way battle right to the end.

The gate dropped in Millville for moto one and Reed was out front followed by Dungey and then the just-back-from-injury Trey Canard on a Honda. Villopoto was around 10th and spent the whole moto fighting to the front. Dungey made a big mistake in the sand whoops while trying to close in on Reed, who had tossed his goggles at this point. At the finish it was Reed with a seven-second win over Dungey, his seventh moto win of the year. Third place was Villopoto who made a late pass on KTM’s Mike Alessi. With the win, Reed’s lead extended to 21 points over Villopoto and 25 over Dungey with just nine motos to go. The popular veteran was in position to possibly pull off his most improbable championship yet!

Then, the entire 2011 450MX series swung on the opening lap of moto two. Forty riders roared into the first turn with Reed and Villopoto 1-2 and everything was looking great for Reed to continue his march toward the title. The two riders swapped spots in the sand whoops section with Reed sneaking into the lead. He beat Dungey in moto one, had passed Villopoto in moto two and was ready to go for the win again. Then, everything went way wrong.

We’ve all seen the video by now. Reed’s back wheel hops out from under him coming up to the face of a tabletop and his CRF450R gets squiggly up the face. Unable to hang on, Reed gets separated from his motorcycle and flies through the air. It was an amazing crash topped only by the fact that he wasn’t seriously hurt. Like some sort of superman, he got up after hitting the ground, waved off the medics and slowly started going again.

The crowd realized what they were seeing and the cheers followed the Honda rider wherever he went. For those moments when Reed was suspended in the air, it seemed possible that his career was up in the air as well, as the almost-certain injuries he was about to suffer could have easily forced a man to hang up the boots.

It was an amazing crash, but an amazing recovery, too, and then to finish the moto was even more amazing. No one who was there will ever forget it. Somehow Reed made it back up to 14th and salvaged seven points and fifth overall on the day.

Reed’s entire title chase turned right there, though. Instead of taking a double moto win and extending his points lead even further he left with just a five point lead. Reed didn’t have anything broken from the crash, but he did have a torn groin and a shoulder injury that wouldn’t go away.

The next week Reed went 7-4 at Washougal and lost the points lead and after a break he was never able to get his mojo back from earlier in the year. He actually came back a few months later to score a moto win at the 2011 Motocross of Nations for Australia, but for the most part, Reed was never the same outdoors after that crash. The crash—now known simply as the Chadapult—was an all-time “what if” for Reed and his fans.

The Millville fans supported Reed’s ride back through the pack, and then found more to love when Dungey made the move on Villopoto to take the moto win and the overall. It was an unbelievable day at Millville and one that sits firmly in the best motos of all-time.