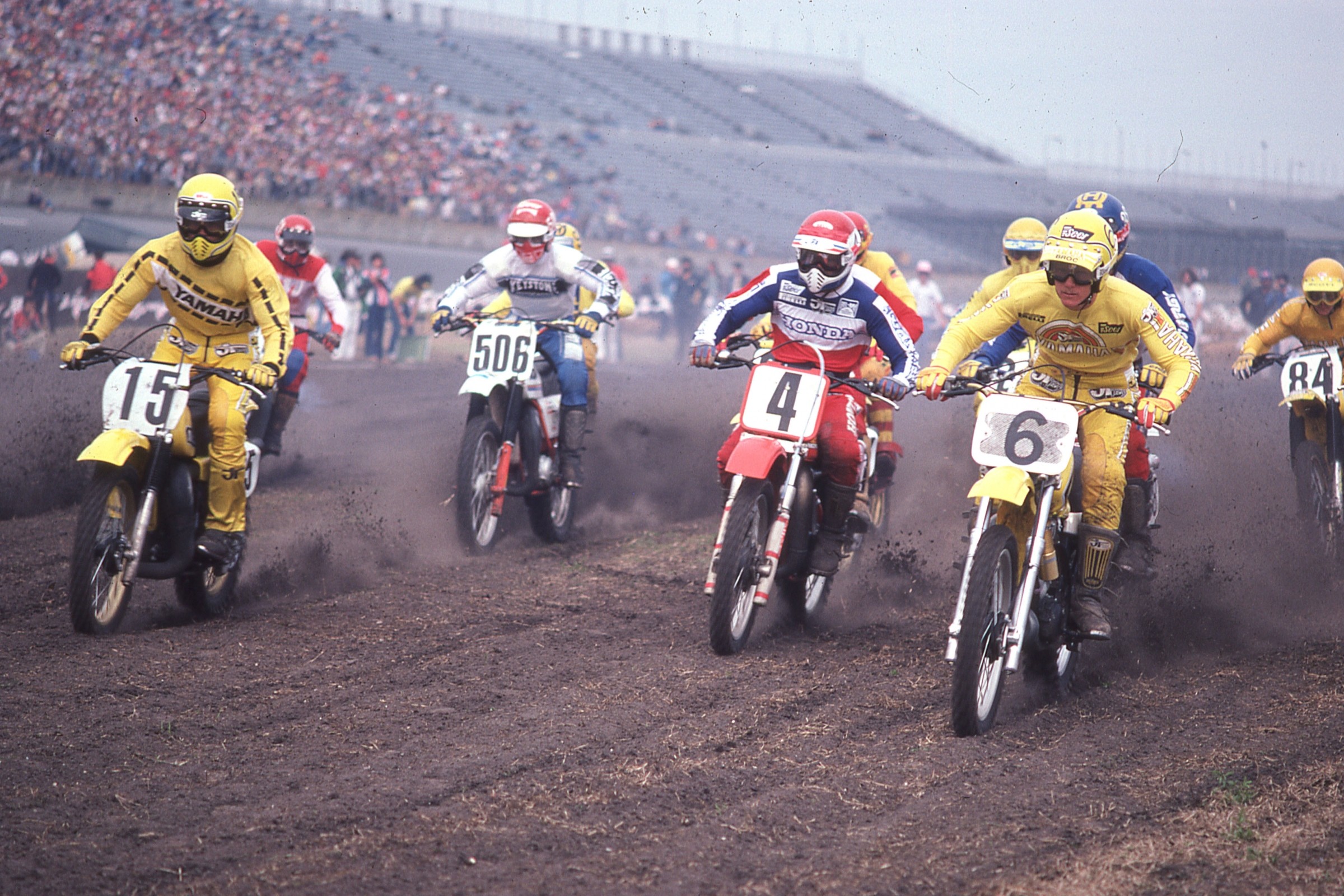 The Daytona Supercross by Honda has a unique and lasting place in the history of AMA Supercross. Since the series inception in 1974, Daytona International Speedway has been the centerpiece of the series. As a matter of fact, the Daytona race predates the series itself by three years—it was first held in 1971 as a stand-alone, unsanctioned event. By 1972 it was part of the Florida Winter-AMA Series, and in 1973 it was considered a round of the AMA National Motocross Championship.

By 1974, the concept of “stadium motocross” was taking off, and it was determined that a new series would be organized that would consist of these man-made tracks in places like the infield of Daytona International Speedway and the Houston Astrodome, and even the LA Coliseum. The first series was officially called the AMA Yamaha Super Series of Stadium Motocross, but an AMA officer named Dave Despain—yes, THE Dave Despain—shortened the term in the press kit for the 1975 version of the series and just referred to it as “supercross” instead.

Since then, AMA Supercross has grown from its modest roots to the single most prestigious and important dirt bike series in the world, with seventeen different stops scattered around the United States and Canada. The series attracts the best motocross athletes from all over the world, with a global industry to serve its riders and fans.

At the center of it all remains Daytona, the granddaddy of them all. And while it’s undergone many changes over the years—though nothing as major as the incredible Daytona Rising project that was just completed—it’s still the same exhaustive test of man and machine, on the roughest and longest track on the circuit.

It’s not only the setting on the infield that makes the Daytona Supercross by Honda an outlier among the other rounds of AMA Supercross. The ground itself—there’s deep, dark Florida sand under that beautiful infield grass that grows long, deep and brutal ruts by the race’s end—challenges the riders in ways no other supercross can, or even wants to.

As a result, a win at the Daytona Supercross by Honda is considered more of an achievement apart from any other victory on the tour. Results here signify a combination of a rider’s talent, strength, speed and race-craft, with a little bit of luck—both good and bad—sprinkled into the mix. And while both the track and the event have evolved over the years (like clay being brought in to build more solid jump faces, and the introduction of lights to move the race from the afternoon into an evening event) the race remains the toughest test of all in AMA Supercross.

Take that first “official” Daytona Supercross in 1974, for instance. Two classes were held and both winners were international stars. 250cc Class winner Pierre Karsmakers hailed from Holland while 500cc winner Roger DeCoster came over from Belgium, and together they put their names in the AMA record books as winners of the first AMA Supercross. Karsmakers would go on to win the series while DeCoster would return to Europe, where he was the reigning 500cc World Motocross Champion. More than four decades later DeCoster will be here for the 2016 Daytona Supercross by Honda—he’s the team manager for Red Bull KTM and #1 plate-holder and defending Daytona winner Ryan Dungey.

In 1975, Connecticut rider Jimmy Ellis won the Daytona Supercross on a Can-Am motorcycle, and he would go on to win the AMA Supercross Championship as well.

“Jammin'" Jimmy Weinert, Bob “Hurricane” Hannah and Marty “Typhoon” Tripes didn’t just have cool nicknames in common, but they also had Daytona Supercross wins next to their names in the record books.

The eighties would see a parade of future Motorcycle Hall of Famers carve out wins for themselves in the deep infield sand, including David Bailey, Rick Johnson, Darrell Shultz, and Hannah again, who won his final major AMA race here in 1985.

The first truly dominant figure at the Daytona Supercross by Honda would come to Florida from Michigan. Team Honda’s Jeff Stanton would win the Daytona SX every year between 1989 and ’92, setting a record for consecutive wins that stands to this day. Stanton also won three AMA Supercross Championships over that four-year span, but it was the sheer dominance in those Daytona Supercross rides that Stanton counts as the finest races of his epic career.

Same can be said for Mike Kiedrowski, who picked up where Stanton left off at Daytona, winning three consecutive times between 1993-’95. A hard-working, hard-charging rider in the same mold as Stanton, California’s Kiedrowski felt most at home when he was on the roughest of racetracks, and nothing suited Kiedrowski better than this race.

After Stanton and Kiedrowski, if there was ever a competitor that best epitomizes the spirit and challenge of the Daytona Supercross by Honda, it’s Ricky Carmichael. Regarded as the greatest of all time (hence his fitting nickname “the GOAT”) Carmichael was practically raised here, watching the races every year with his family in the grandstands while growing up on the Gulf Coast of Florida. As a young local rider he built an exceptional resume of wins, and by the time he was ready for his first chance to race the Daytona Supercross as a 125cc professional in 1997, he was already regarded as the heavy favorite, despite only being the youngest man on the track.

Unfortunately, he was also the wildest, especially after a first-turn crash left him with bent handlebars. A litany of crashes and mistakes over the next fifteen laps saw Carmichael ride across the finish line a disappointing sixth-place.

“I really just put too much pressure on myself and then we all crashed in the first turn,” shrugged Carmichael, who was riding a Pro Circuit Kawasaki KX125 at the time. “I guess that’s just the way it goes sometimes.”

It went much better the next time, as Carmichael came back in ’98 to not only dominate Daytona, but the entire 125 East Region AMA Supercross Championship, winning every round for the only perfect season in SX history. The centerpiece was his first Daytona win, an epic runaway that showed the world that he was a fast learner, even on a tricky, unique course like Daytona.

Two years later, Carmichael would jump up to the premier class, which was then filled with 250cc two-stroke motorcycles. After being shut out of the winner’s circle for the first eight rounds of the series, he showed up to win at Daytona, and he did just that—with twenty-two seconds to spare.

“During the day, people were coming up to me saying I was riding good in practice,” said Carmichael, then twenty years old. “”Can you win? Can you win?’ I was saying, ‘Yeah.’ Sometimes when people say, ‘yeah,’ they don’t really think they can in the back of their minds. Today, however, I had a feeling I could do really well.”

Carmichael’s breakthrough win that day came at the expense of Jeremy McGrath, who was the reigning series champion as well as the reigning Daytona Supercross winner. That afternoon sixteen years ago seemed to mark the beginning of the end of McGrath’s reign as the King of Supercross, as Jeremy would go on to clinch his seventh final championship that season, but 2001 would be the year that Ricky took over.

Over the course of the next six years Carmichael would win five AMA Supercross Championships. It might have been six had he not sat out the 2004 series with a knee injury. He would also win the Daytona Supercross by Honda four more times, giving him the career-best record of five—it might have been six if not for a shocking upset in 2005 at the hands of Chad Reed. He also did it on three different brands of motorcycle: Kawasaki (’00-’01), Honda (’02-’03) and Suzuki (’06). His last time on the track came in 2007 when he was only racing a partial schedule, having already announced his retirement. He still went out and finished second at Daytona, beaten only by his heir-apparent, James Stewart.

But Carmichael wasn’t done with Daytona. In fact, when new opportunities presented themselves to work with Daytona International Speedway on the event, Ricky was right back out on the track, only this time in helping to design and maintain the supercross circuit. He also introduced the Ricky Carmichael Daytona Amateur Supercross in 2010, and it’s become one of the premier amateur motocross events of the year. And now he’s running his own race team, along with action sports icon Carey Hart—Soaring Eagle/Jimmy John’s/RCH Racing Suzuki.

“I grew up here as a racer, my family coming to watch every year, and now we get to help other families come to Daytona and spend a long weekend at the races,” says Carmichael, who brings his parents Big Rick and Jeannie, as well as his wife Ursula and their twins Kadin and Elise. “Daytona was such a big part of my life, not only as child just watching my heroes from the grandstands, but then getting to be out there and compete with guys like Jeremy, James, Chad and everyone else. I always considered this my home race, even though I’m from Tallahassee. Because every time I come back and drive through the tunnel, and then see the track on the infield, it feels like I am home.”

Earlier, we mentioned Stewart being the heir apparent to Carmichael, and the fellow Floridian delivered wins for all of his local fans from Polk County in 2007 and again in 2012. James was especially spectacular on the track, turning walls into jumps and making impossible leaps over the Gator Pit. Unfortunately, those risks that resulted in two wins also cost him with big crashes in 2006 and 2011. His return this year will be heralded by the local folks.

Today, nearly all of the top supercross riders call Daytona their home race, as most have set up shop somewhere in the Sunshine State, and most even build special “Daytona” sections into their practice tracks. At the head of that group is Ryan Villopoto, who not only owned a track in Florida, but also owned the Monster Energy Supercross Championship from 2011-'14. He also owns four Daytona wins—2010, '11, '13 and '14. Those four wins in five years is a record only Stanton (four straight) and Carmichael (five total) can exceed, but as is typical for RV, his records were set in a very quiet fashion.

Finally, Ryan Dungey broke through for his first Daytona Supercross by Honda win last year—surprising because Dungey’s fitness seems a perfect fit for wins at this track. But Daytona is always filled with surprises, especially as it was in 2008, the last time a rider without any Florida ties broke through for a victory. It was Kevin Windham, and it was an epic mudder. Reed actually led most of the way, with monsoon-like rains coming down and drowning most of the track under water. On the very last lap, Reed’s bike had finally ingested enough, and it stopped running. Windham slithered past, taking a victory that also marks the last one for Honda at the event it sponsors. To this day, Windham claims it as one of the most memorable wins of his career. It wasn’t a home win outright, but Kevin has always felt at home in muddy conditions—and any racer is comfortable with a visit to Daytona’s famous victory lane, no matter how they got there.