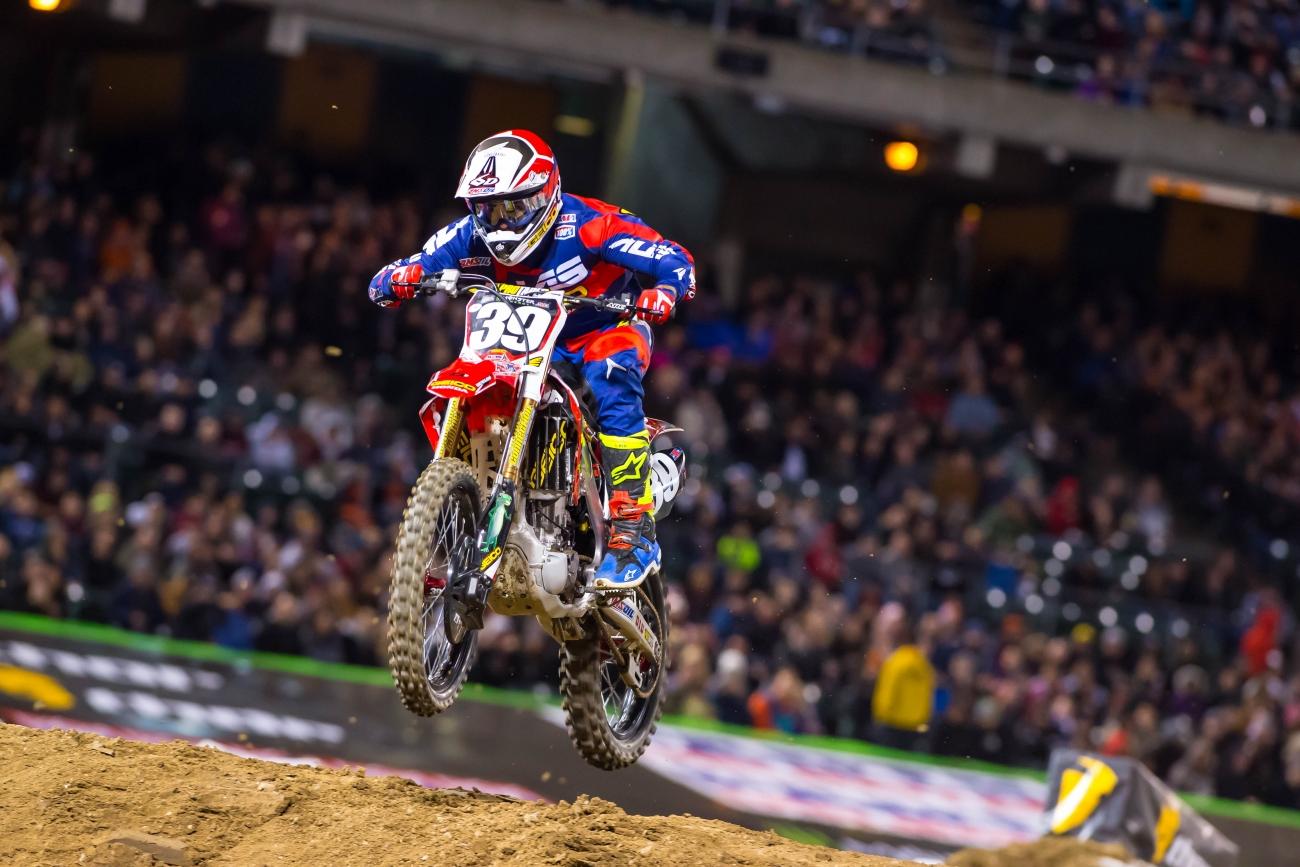 After riding both practice sessions and qualifying tenth overall, Honda HRC’s Trey Canard pulled the plug before the night show. Canard cut his hand badly last week in Anaheim when he was landed on by another rider, and he’s also nursing a sore groin that has been giving him problems all season. According to the team, after practice Canard’s hand swelled up and he began to lose strength.

“It was definitely tough to walk away and not race tonight, but I think it was a smart decision,” Canard said in a statement. “I just didn’t have the grip and overall strength in my body, with the combination of my groin and hand injuries. I think it’s dangerous for me to be out there, and I don’t want this to turn into another injury. We’re pretty much out of the championship hunt, so it seems like the smarter choice is to scratch this one and come back when we can.

Yoshimura Suzuki held their collective breath as Blake Baggett, in his first race back, slammed to the ground in his heat race and landed on his surgically repaired shoulder. “I got pushed high in a turn and went to seat bounce a jump and just committed to the something I probably shouldn’t have, but it was in the heat of the moment,” Baggett said in a team statement. “I got wheel-spin off the face and ended up endoing off a rhythm triple and went down on my bad shoulder. From there the night was just tough. It [the shoulder] was just really sore. I’ll have to go back and rehab a little bit, but luckily everything I got surgery on is still good, just a little muscle sore.” Baggett finished fifteenth in the main event.

Prior to the start of his fill-in role with Soaring Eagle/Jimmy John’s/RCH Suzuki, Jake Weimer told us that he wanted to “set small goals” this season, not reach for the stars. His best finish coming into the race was an eighth in San Diego, and he said his goal was to just match that for now. With less than a week of testing under his belt, Weimer did exactly what he hoped to do, finishing eighth again. “I felt like I rode a little tight in race conditions. That was the first time out for me on the new bike but I thought, overall, that it was awesome,” he said in a statement. “The bike felt really good. The team was awesome and I thought we worked well together. I’m stoked on the bike.”

After 4-4-4 finishes to start the season, and solid progress in speed last week in Anaheim 2, things were looking up for Eli Tomac. But the Monster Energy Kawasaki rider didn’t have a good race. “The day was up and down for me,” said Tomac. “We couldn’t quite figure out bike set up on tonight’s track which fought against us all day. Although, once the night show came around and we took the win in the first heat, I felt really good and was ready to drop the gate of the Main Event. Unfortunately, a small mistake getting out of the gate held us back from our goal. The team and I will continue to work and come back in Phoenix rejuvenated.”

Tomac ended lap one in twelfth place, but also lacked his usual speed trying to come through, logging just the ninth-fastest time. After the race, we spotted a big meeting between Kawasaki folks and Eli’s father, John. No doubt there will be some serious development going on this week, as Tomac continues to develop his new-for-2016 ride.

Tomac’s teammate Wil Hahn is slowly returning to form after missing all of Monster Energy Supercross last year. After having to qualify through the LCQ at the first three rounds, Hahn made the main from his semi race in Oakland, and captured his first top ten since a sixth on March 8, 2014 in Daytona. “Overall, tonight was a huge improvement,” said Hahn in a Kawasaki press release. “My starts have improved which made my life a little easier in the main event, although my aggression was not quite up to par with my competition. We’re going to continue to put our head down and keep improving every weekend.”

We thought Ken Roczen might give Dungey a run, though. Kenny got into second place on lap five, and the gap was a manageable 1.8 seconds. But the battle never materialized, as Dungey simply motored away. Check out their times from laps 5 through 20:

Laps eight and nine were the real key to this battle. Roczen tried to put the clamps on with a 53.508 on lap eight, his best of the night, while Dungey ran a 53.8. On the start of lap nine, it was ON. Dungey and Roczen recorded the two best times in the first segment of the track, Dungey slightly quicker with 32.9 to Roczen’s 33. 1. By the end of the lap, Dungey recorded a 53.229, his best lap of the race, while Kenny went 53.5. Those few tenths swung the momentum back in Dungey’s favor, and he outraced Kenny from there.

*Cooper Webb’s average does not include his thirteenth lap, which clocked in at three minutes while he worked on his bike.

**There was an error in Chris Alldredge’s times.

Cooper Webb lost the lead, and the race, when his bike died, but Joey Savatgy certainly had some pace, logging the fastest time. Note Webb’s average lap time, though, which shows he was quickest overall on the laps he did complete at speed. On the AMA lap sheets, Webb’s average does not include his thirteenth lap, which clocked in at a whopping three minutes while he worked on his bike.

GEICO Honda’s Jordon Smith is dealing with an AC separation in his shoulder, which he aggravated in practice and the main event. Smith toughed out an eleventh place finish on Saturday. “Day was pretty tough for me, I had a crash at the practice track during the week and had an AC separation in my shoulder,” he said. “Unfortunately a mistake by me in the main event cost me a pretty good finish. Just rehab the shoulder and get ready for next weekend.”

After starting the season with an average finish of twelfth, similar to his 2015 season, Alex Martin was en route to a podium when he clipped a Tuff Block entering the over/under bridge. The impact was so violent that Martin threw up in his mouth. “Lap 10 or 11 I can down off the finish line and was pretty aggressive in the corner and the Tuff Block just came up and bit me handlebar—the left side—and threw me down,” he told Racer X’s Steve Matthes. “Actually I hit the ground so hard that I threw up instantly. I didn’t hit my head, just my ribs and it took me almost a minute to get my breath back.”

Before the crash, Martin looked much, much better than previous races. “Just got more rest this week,” Alex explained to us. “I’ve been going at it hard. Today I felt like a totally different person.” Alex also made a few bike changes via stiffer forks and a softer shock, but he says the biggest difference was his own physical prep.

In his first year with Troy Lee Designs/Red Bull/KTM, Mitchell Oldenburg has had a pretty unassuming start to the season with 9-15-9 finishes. In Oakland, he had another quiet night, but secured a career-high fourth. “Tonight I finally felt like my speed really showed out there on the track,” said Oldenburg in a statement. “We’ve been working really hard and I can’t wait to get back out there next week.”

Yamalube/Star Racing Yamaha rookie Mitchell Harrison missed his second straight race. A source told Racer X that Harrison passed the concussion protocol, but it was a day late and he was not cleared to race. He will be back this weekend in Glendale.

YP.com/Nuclear Blast KTM’s Cole Thompson, who is nursing a sore shoulder from a crash at Anaheim II, scored his first top ten since a sixth in St. Louis on March 29, 2014. He missed all of last season with injury.

Adam Enticknap got the call to fill-in for the injured Kyle Chisholm at Rocky Mountain ATV/MC. In his first ride with the team, the seven deuce deuce held off a strong charge from CycleTrader.com/Rock River Yamaha’s Tommy Hahn in the LCQ to make his first main event of the season. He finished twenty-first on the night.

FLY Racing/TPJ Suzuki’s Nick Schmidt continued his stellar start to the season, qualifying for his third consecutive main event on Saturday. He would finish the night eighteenth.

Videos of the weekend

Well coming into the race already injured and having this happen in practice made for a really tough night. Happy to get some points but bummed to make that mistake in the main! We won't quit. On to Phoenix! @fchonda @mtfmx