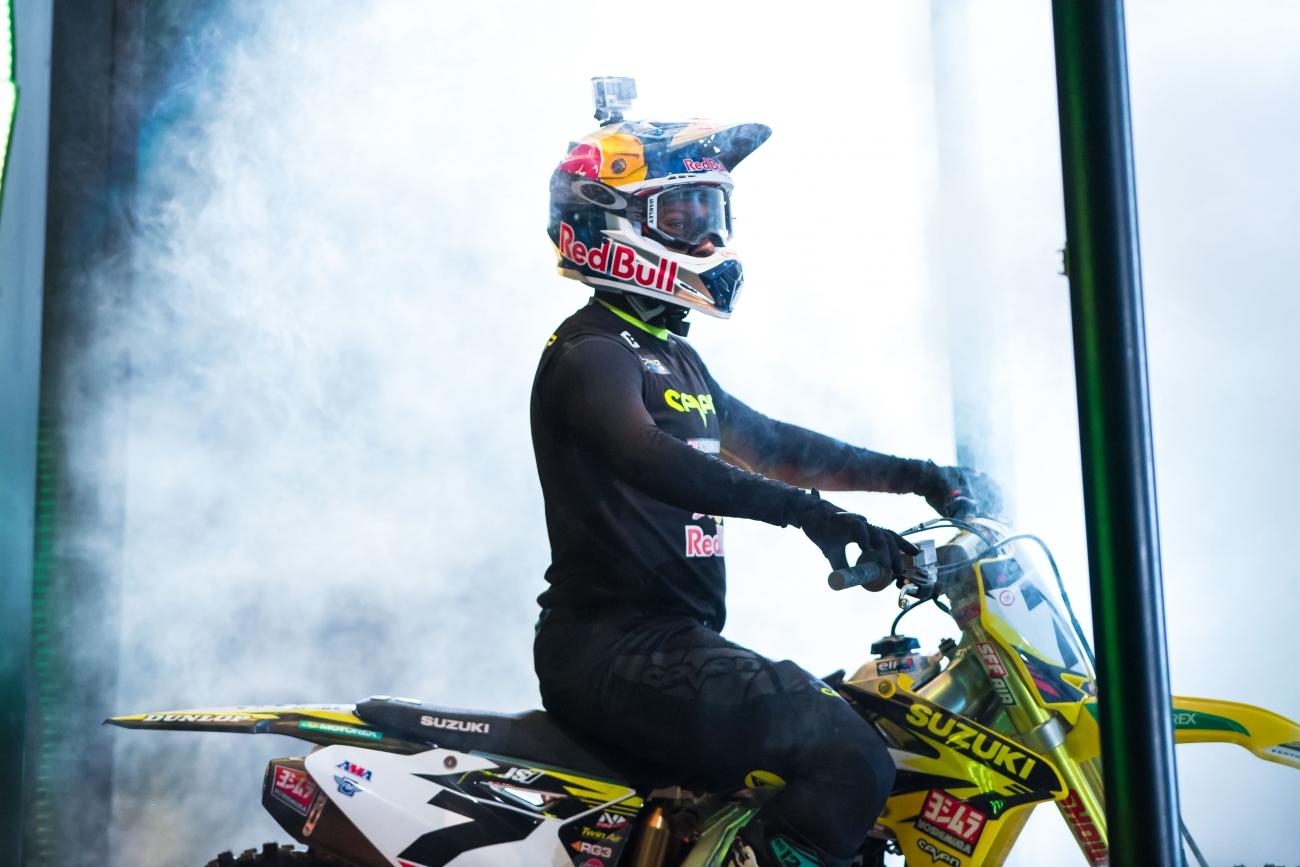 A collision with Ryan Dungey knocked James Stewart out of the opener (and consciousness), but the Yoshimura Suzuki rider will return this weekend in Oakland. He’s all but out of championship contention at this point, but his presence will still make things more exciting—the two-time 450SX champ can mix it up with anyone on any given night. And because the dirt is similar to the dirt he has at home, Oakland is one of Stewart’s favorite tracks. He won here in 2011 and 2012. –Aaron Hansel

Stewart won’t be the only Yoshimura Suzuki rider coming back in Oakland—Blake Baggett is scheduled to line up this weekend for the first time in 2016 after breaking his collarbone, ribs, and scapula during pre-season testing. We know Baggett can go fast, he put in some great rides last year, but this is also his A1 and he’s probably just looking to test the waters before getting back into the swing of things. The Suzuki folks have to be happy to have both of their riders back together. They’ve been teammates for 18 months, but besides the Monster Energy Cup, Stewart and Baggett have never raced under the same tent on the same night! -Hansel

Talking about Ryan Dungey’s lead here, which is more than double the six-points he had one race prior to taking another win at A2. It may not seem like much, but when that gap is in the hands of one of the most consistent riders of all time, it might as well be a hundred points. Unless the competition wants to see Dungey and his Red Bull KTM roost off with this thing early, somebody has go to cut into that lead on Saturday night. –Hansel

What a night from GEICO Honda’s Christian Craig at A2. Yes, Cooper Webb won again, but Craig didn’t make it easy on him. Craig even beat Webb in their heat, and went back and forth with him over and over in the main, repeatedly checking up and knifing to the inside like an angry butcher before eventually getting tight and slipping to third. Craig’s been gone from supercross for quite a while, but he’s getting back into the flow quickly. We’ll see if he’s the first to put the brakes on Webb’s rampage. -Hansel

On paper Marvin Musquin had an okay night, taking ninth for the second week in a row, but there’s more to it than that. The Red Bull KTM rider got into the Tuff Blocks in turn one, crashed and was forced to come back from dead last. Musquin’s a 250SX Champ, and it’s only a matter of time before his skills have him battling much closer to the front. If he gets a good start in Oakland we could get a preview of that action. -Hansel

Jake Weimer doesn’t have unrealistic expectations on his move to Soaring Eagle/Jimmy John’s/RCH Suzuki. Eventually he wants to contend for podiums, but he knows that will come with time. “I’m not going to sit here and say, “At Oakland I can go from being an eighth or tenth place guy to a fifth place guy.” But that is the goal,” he told Racer X earlier this week. After seven years with Kawasaki, Weimer will have a week to get accustomed to a new brand and team. For now, he wants to keep his goals small. “My best finish is an eighth. I’ll try and better that. That’s the goal,” he said. “The whole thing for me this year was to not set goals that were too big.” – Chase Stallo

Chad Reed was done in 2012. He left Round 4 tied in points with Ryan Dungey. He was washed up by 2014. He left Round 4 second in points, seven behind Ryan Villopoto. It’s easy to say you “never doubted Chad Reed,” as he sits second in points, coming off back-to-back podiums. But there were questions entering the season—legitimate ones. No one over the age of 30 has ever won a premier class supercross title. How would he adjust to the Yamaha? What would this new team look like? Could he contend again? Those questions seem to have been answered, except for that title thing, which we’ll know by May. For Reed, in the midst of his nineteenth professional season, the will to win is certainly still there. “We don’t come play just to make up the numbers,” he told us after San Diego. “We want to be on the podium, we want to win races. So I’m content and I’m happy, grateful. But you always want to win.” Can Reed make up ground on Dungey and leave Oakland secure in second? - Stallo

While Alex Martin is off to a slow start in his first year with Yamalube/Star Racing Yamaha, it’s a familiar one. Through three rounds last season, Martin averaged a twelfth place finish. Through the rounds this year, Martin has averaged, you guessed it, a twelfth place finish. Martin’s season turned last year in Oakland, where he found the podium for the first time in his career. He went on to average a fifth place finish over the last five rounds en route to sixth in the championship. Will Oakland provided a similar fate this year? - Stallo

As we pointed out earlier this week, Justin Brayton is one of only seven riders to have three top tens to begin the season. (You may have heard of the others: Dungey, Reed, Anderson, Seely, Tomac and Roczen.) Brayton’s turnaround from an injury riddled first year with the BTOSports.com KTM team actually began this off-season, when he traveled to Europe and won just about everything there was to win. “I already feel like everything is going better back home—the new bike, I’m feeling healthy,” he told us in November. It’s a contract year for Brayton, so this hot start is exactly what he needed following a down 2015 season. - Stallo

Everyone is willing to offer advice, right? Eli Tomac and Ken Roczen have proven their speed plenty of times. At this time last year, they’d swept the first three races. For the 2016 season, everyone just wanted to see them prove their consistency, longevity and durability. Well, they’ve done exactly what everyone wanted so far, and guess what they’ve gotten as a reward? A big old points hole on Dungey! As more contenders go out with injury, it will be harder to stack riders between a win and a solid Dungey finish as the season goes on. The long game is good, but it would be of benefit to shorten up the wait, and that points lead, as soon as possible.  – Jason Weigandt