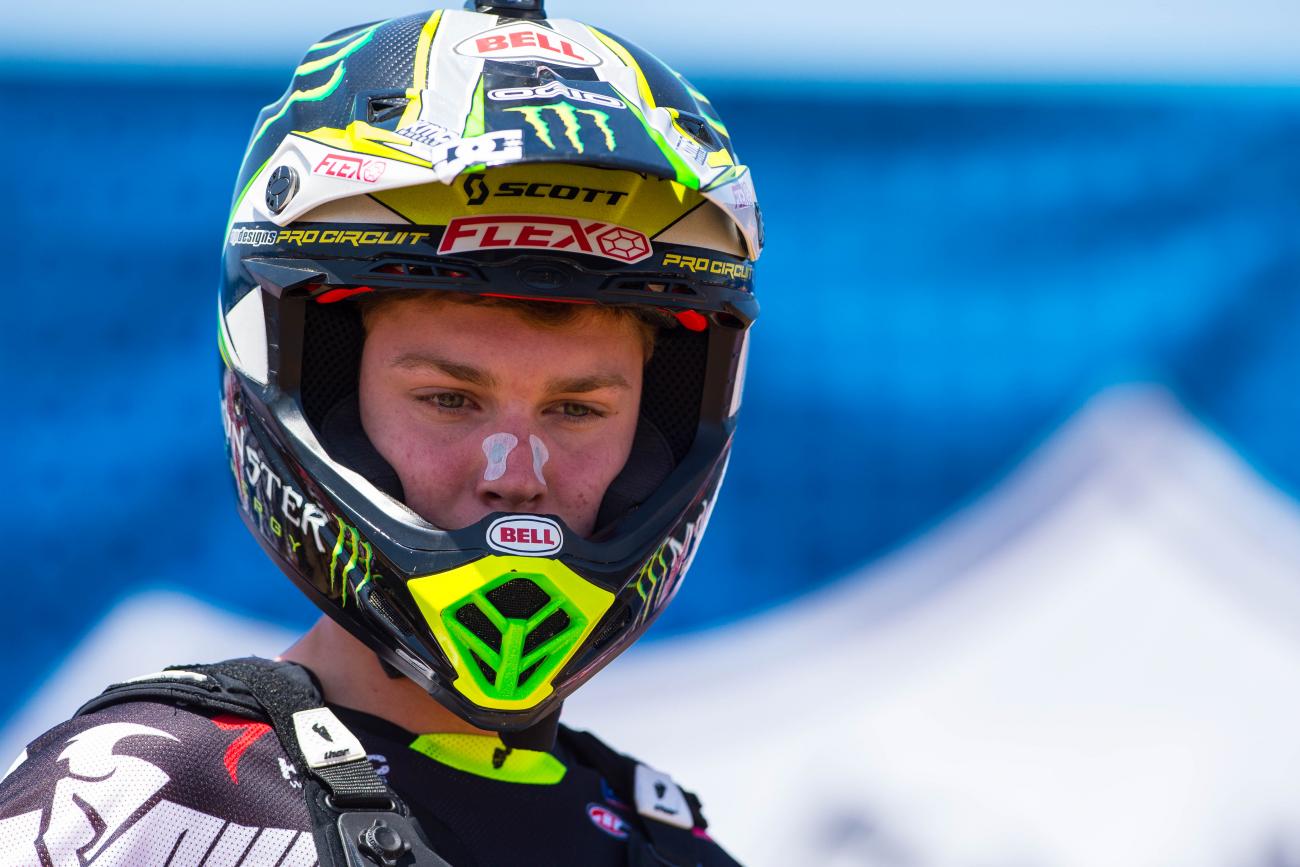 Rapid Reaxtion AC Out for Outdoors

Jason Weigandt: History said this kid was the future. Adam Cianciarulo was next, with all pieces in place, from the right team/bike/trainer combo, his Florida upbringing, and even hair with an ever-so-slight hint of red. He was even motoing down with Ryan Villopoto, sharing the brand, sponsors, trainer, and track.

It was deeper, though. Watching Cianciarulo as an amateur, he had that certain something else, that certain magic for being in the right place at the right time. I saw good motos and bad, but I watched him dig out the overall win and championship at several events, because he’s more than just a great rider; he’s a winner.

He had an inner confidence like James Stewart, a hate for losing like Ricky Carmichael, and a flair for the big moment like Travis Pastrana. Better yet, he knew this and embraced it, instead of shying away from the pressure.

This is the stuff that made him can’t miss. Unfortunately, he’s been hit with injuries, the only thing that can really trump such talent. Now, we’ll all play armchair medic this week figuring out why this keeps happening, while also hoping it stops. I personally don’t think you can draw any connection to these injuries. This is a different shoulder and a different injury than the last one. He doesn’t seem to ride recklessly, he’s no longer “too small” like we used to hear. Maybe he’s too big now? On it goes. Just guesses though.

Listen, the magic is still there. That’s why Adam won his first supercross ever. That’s why he led from the get-go at Hangtown. In the big moment, he still knows his place. The only thing that worries me is if we’re going to use history as our guide here—we’re comparing him to past greats, using his team/trainer combo for reference—we can’t ignore that dudes that get hurt a lot usually don’t just turn it off.

In this case, I hope history really doesn’t repeat itself.

Davey Coombs: If you went back and read everything ever written or listed everything ever said about any prodigious talent that ever came along, you could replace that name with Adam Cianciarulo and it would still be accurate. He had all the God-given talent, a strong family, solid support, the right work ethic, and the right mindset to become one of the sport's very best. That's what was said about Kevin Windham, Ricky Carmichael, and James Stewart, great names for any young motocross prospect to be associated with. But it was also what was said about Robbie Reynard, Bobby Bonds, and Travis Pastrana, unbelievably fast young men who also proved to be too fragile to ever reach their full potential.

The jury is still out on Adam Cianciarulo, but three years into his pro career, he's yet to finish a complete series. He's shown flashes of world-class speed and won a few 250SX main events, but he can't seem to keep it all together long enough for a championship. As the star prospect on Mitch Payton's vaunted Monster Energy/Pro Circuit Kawasaki team, he's not realized anyone's expectations, including his own, and that has to be frustrating.

But Adam is not alone in this dilemma. Look at Jeffrey Herlings over in Europe, arguably the very best 250/MX2 rider since Ryan Villopoto was on the rise. Herlings is also struggling with a string of bad luck and injuries, but not of the kind to completely shut him down (well, other than the femur break) like Cianciarulo's shoulder injuries and illness. You can call him fragile too, or maybe just unlucky. He's held it together long enough to win two world titles, but he only has outdoor motocross to worry about. Cianciarulo was expected to come in and do what RC, RV, Windham, and Stewart all did, which is win young and win often. It hasn't worked out that way. Yet.

If I were Adam Cianciarulo, I would look to Rick Johnson as a role model, or maybe Jeff Stanton. Neither were mini-cycle or amateur superstars, nor did they win in what was then the 125 Class. But each built successful careers on bigger bikes, as late-bloomers (Stanton more so that RJ). And that's where Adam is now: He's getting bigger and taller, and he's learning patience the hard way. It's not too late for Cianciarulo, but it might to be getting too late for him to be a standout three-year 125/250 rider like Carmichael was, or Stewart, or Villopoto. It's time to start looking forward for Cianciarulo, but he's going to have to learn to stay upright too.

Steve Matthes: Yeah, I can hear you guys now: “injury-prone” and “another Robbie Reynard.” And I have no real defense on Adam being “injury-prone” because, well, he has been.

But, and I know this is a big but, the issue is that Adam’s got a hereditary shoulder problem; he doesn’t have enough of a “socket” to keep it in. So, the first time he had shoulder problems, this wasn’t really detected, and the second time he had issues, they went in on his bad shoulder and added a piece of bone to stop the shoulder from coming out. And by all accounts, publicly and privately, Adam’s insisted that the shoulder that was fixed has been great. And now with the news that his other shoulder, the “good” one, has caused him issues, the doctors will go in and do the same thing to it. Like his repaired one, it should be fine.

We’ve seen AC miss substantial time and come back pretty strong. His track record is pretty good with building himself back up, so he should be back for the 250SX East Region and be cleared of any shoulder issues from here on out. The one thing that’s been bothering him—shoulders (through no fault of his own)—has been fixed. I guess I’m more on the optimistic side than most, but he’s 18 years old, his problem areas have been fixed, and I think he’ll be okay from here going forward. At least, I hope so!