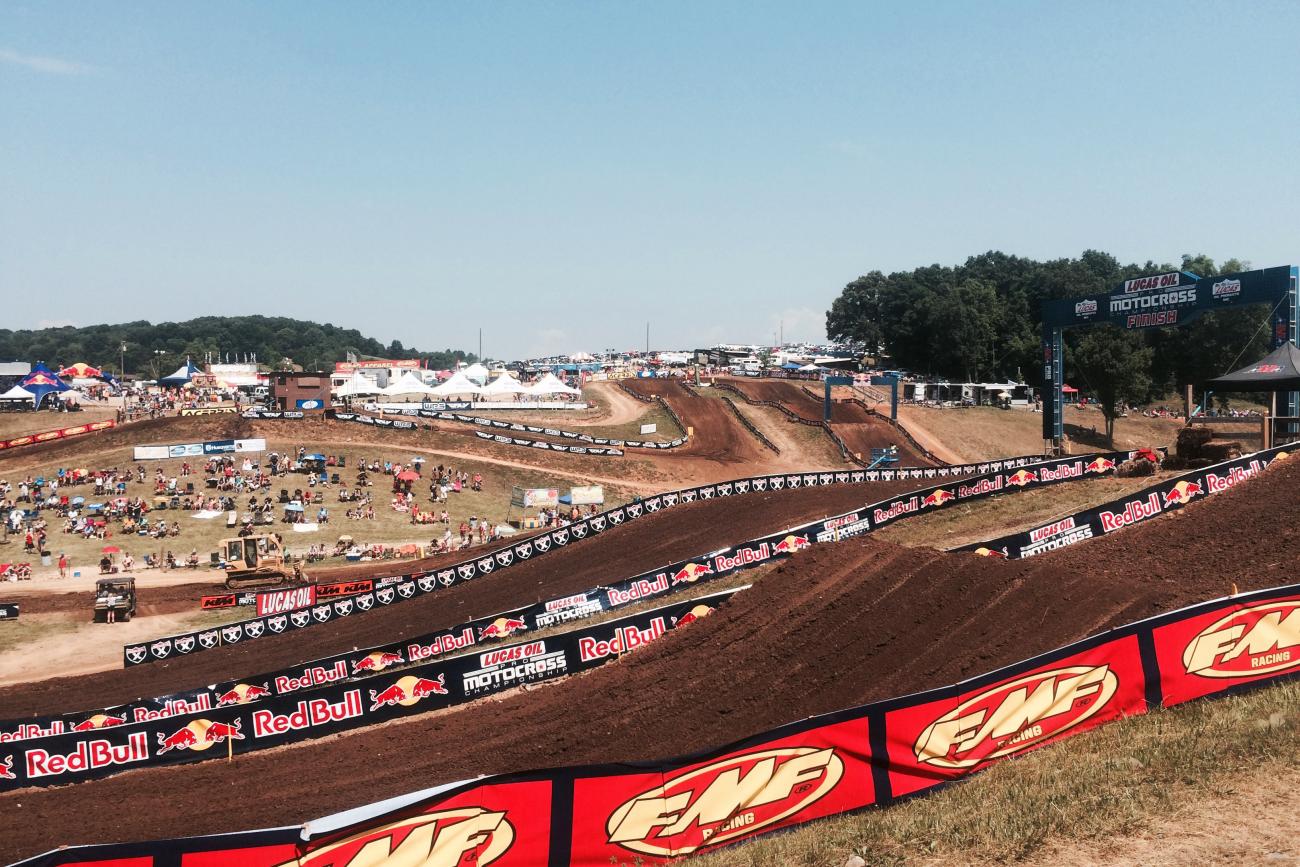 Welcome to the Tennessee National Race Day Feed. We'll be updating the feed as the day progresses, so keep checking back for the latest news as the racing action unfolds.

Red Bull KTM’s Ryan Dungey is no stranger to the red plate and has adapted to it well since GEICO Honda’s Eli Tomac relinquished it last weekend in Colorado after a brutal crash. Dungey got off to a top-five start and quickly picked off riders one by one in the opening laps of today’s first moto to take the lead and eventual win by almost thirteen seconds.

Blake Baggett didn’t have the best of starts, but the Yoshimura Suzuki rider fought through the pack to take fifth. Journeyman Ryan Sipes went back and forth throughout the moto to eventually finish in fifteenth. Discount Tire TwoTwo Motorsport’s Chad Reed had trouble in the first corner and had to fight from dead last to twentieth. 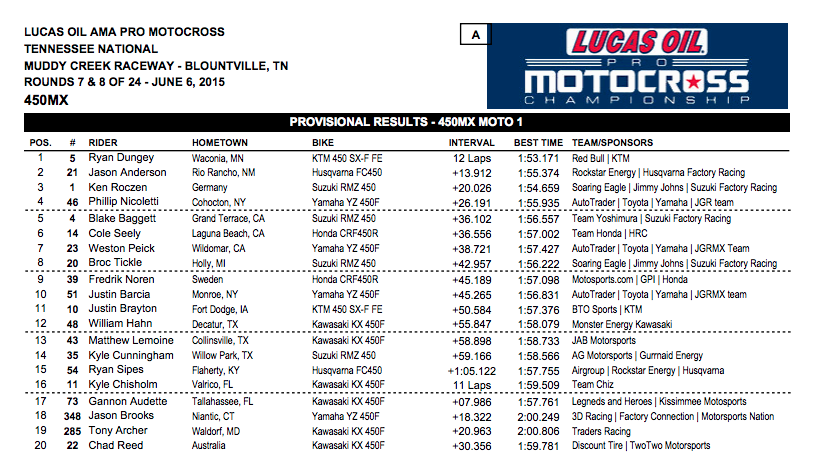 It’s a great start to the day for Red Bull KTM as they just took their second moto win of the day. Marvin Musquin joined the clean plate club by leading this one wire-to-wire and never having to take any roost from the rest of the field. He gained three points on rival Jeremy Martin, who didn’t get a terrible start, but spent most of the race trying work his way around some fast company.

The Yamalube Star Racing Yamaha rider came on strong late in the race to get around Lucas Oil/Troy Lee Designs KTM’s Jessy Nelson as well as Monster Energy/Pro Circuit Kawasaki’s Adam Cianciarulo, who was holding down second place until he went down in the corner following the Bomber Triple. Cianciarulo was able to hold down fourth before finally succumbing to teammate Joey Savatgy and dropping down a position to finish fifth.

GEICO Honda was best represented by Matt Bisceglia—he finished sixth in the moto after a fourth-place start—but teammates Jordon Smith and RJ Hampshire had to work their way from the back following crashes in the opening lap. Christian Craig wasn’t able to follow up with another spectacular Thunder Valley ride due to bike problems. Craig DNF’d the moto and will have to shoot for better results in the second moto. KTM Orange Brigade’s Alex Frye will have to do the same after an unfortunte DNF stunted his rookie debut. 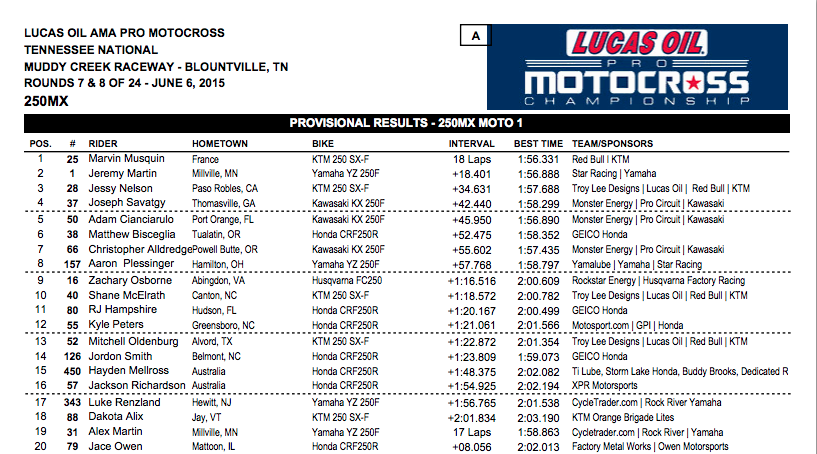 Dungey got off the gate around tenth place and found himself in third following the opening lap with a pass on Yoshimura Suzuki’s Blake Baggett. HRC Honda’s Cole Seely kicked off the moto in second place and held off both Dungey and Baggett for several laps each before dropping positions.

Rockstar Husqvarna’s Jason Anderson crossed the finish in twenty-second place after the opening lap and fought all the way past Seely for fourth to land third overall. It was an incredible ride to say the least. Fellow Husqvarna rider Ryan Sipes worked his way past Autotrader.com JGR Toyota/Yamaha's Weston Peick late in the moto for tenth. We’ll see how much wind he still has in his sails at tomorrow’s John Penton GNCC. 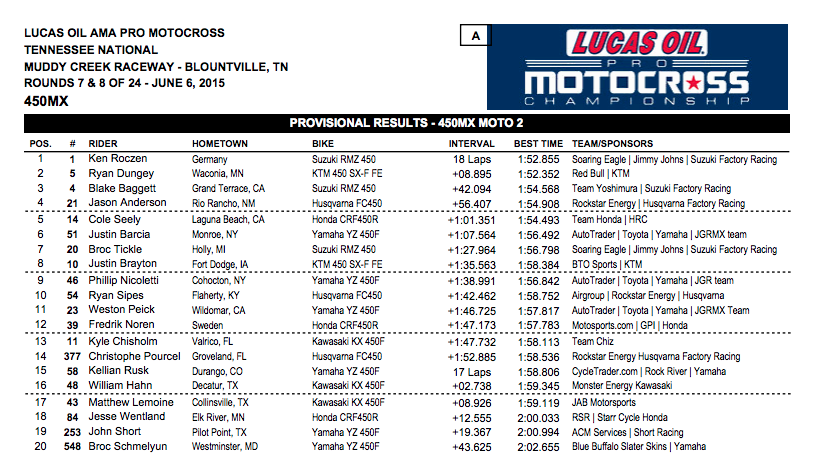 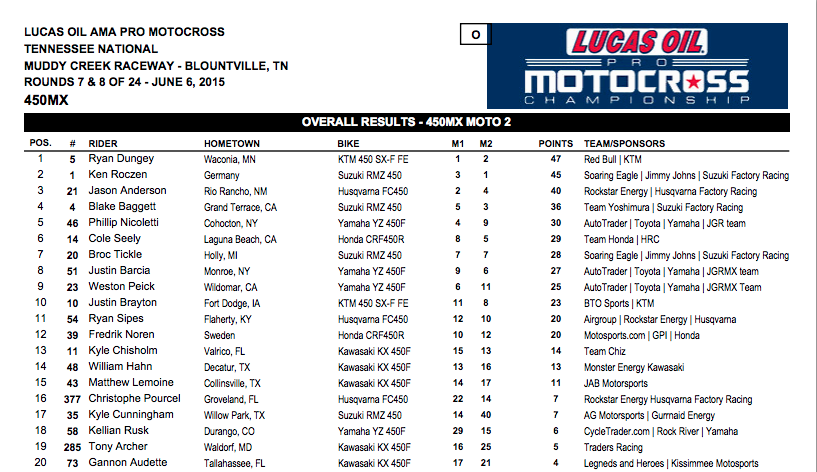 Yamalube Star Racing Yamaha’s Jeremy Martin will tighten his grasp on the red plate as he wiped out the three points Red Bull KTM’s Marvin Musquin gained earlier in the day by coming back with a dominant effort in the second moto and capturing the overall win. Martin now sits six points ahead of Musquin going into High Point. Musquin had a run-in with GEICO Honda’s Matt Bisceglia shortly after the race started and went down with a few other riders. He charged back to an incredible fourth place by the end of the moto for second overall.

Martin’s teammate Aaron Plessinger got a taste of what it feels like to lead a Lucas Oil Pro Motocross National for seven of eighteen laps. Plessinger held off Martin for a long four laps and Lucas Oil/Troy Lee Designs KTM’s Jessy Nelson for a few more after that before he spent his weekly allowance. Plessinger didn’t have much fight left when Monster Energy/Pro Circuit Kawasaki’s Adam Cianciarulo approached, but having experience setting the pace out front will pay dividends in future races.

GEICO Honda’s RJ Hampshire and Jordon Smith redeemed their first-moto efforts by logging fifth- and sixth-place rides in the second moto. Smith charged all the way back from a sixteenth-place start. 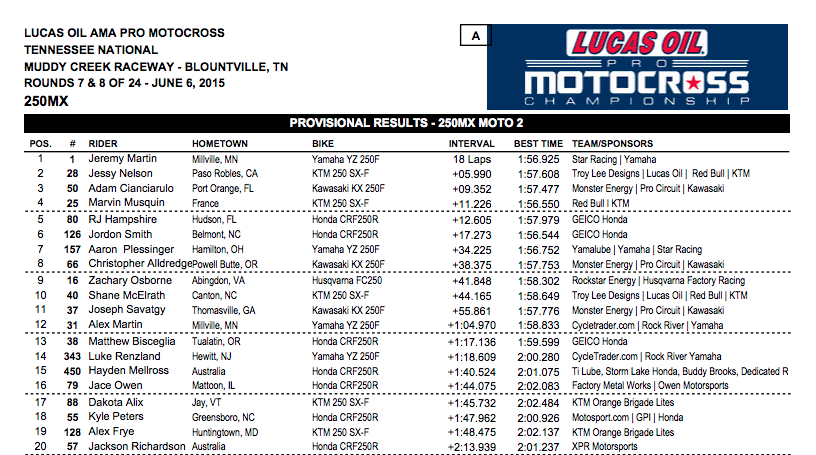 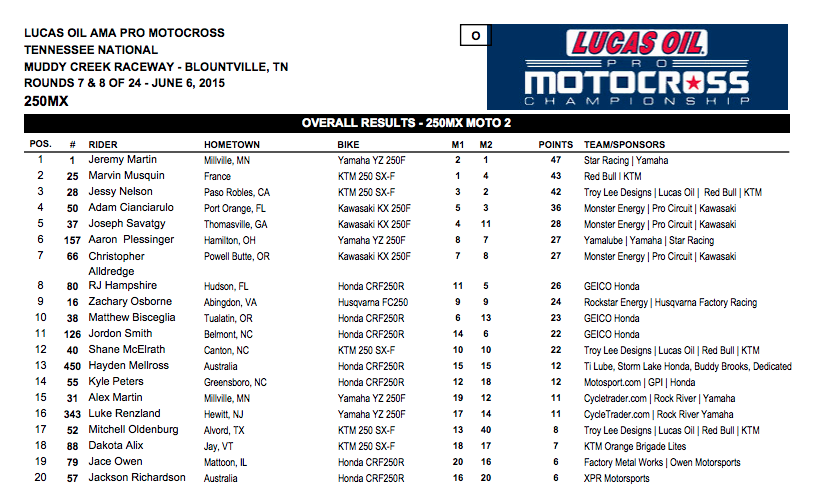 There’s nothing but blue skies and nice weather by the time the second practice sessions commenced. The sun is starting to beat down and the Tennessee humidity will soon become a factor. Some of the jump faces are getting rutted up, but the Bomber Triple has shaped up nicely and most of the 250 guys are handling it with no problem.

Ken Roczen opened up the second 450 A session looking to set the pace. He landed inside of the 1:52 range but was still a tick off of Broc Tickle and Blake Baggett’s times in the first session. The riders and the track got faster as the session progressed. Ryan Dungey, Ken Roczen, and Christophe Pourcel were the only riders to hit the 1:51 mark, although Dungey and Roczen were on their own level, setting times over a half-second faster than Pourcel. Broc Tickle and Blake Baggett’s times from the first session were good enough to keep them in the top five.

We didn’t see it all go down, but Phil Nicoletti bounced on the quad landing and went down. He took a ride off the track in a cart, so hopefully we’ll see him on the line for the first moto. We’ll check in with the team soon. UPDATE: We talked to Phil and his bike stuck in some deep soil when he jumped halfway between the triple and quad. He was feeling it for about five minutes, but he's good to go for the motos.

Ryan Sipes’ sanity is questionable. He’s racing 450MX here today at Muddy Creek and will pack up at the end of the day and make a five-hour drive up to Millfield, Ohio, for the three-hour long John Penton GNCC. He qualified in sixteenth today and will be a guy to watch all weekend long. Tune in to RacerTV.com to see how he does at the GNCC tomorrow. 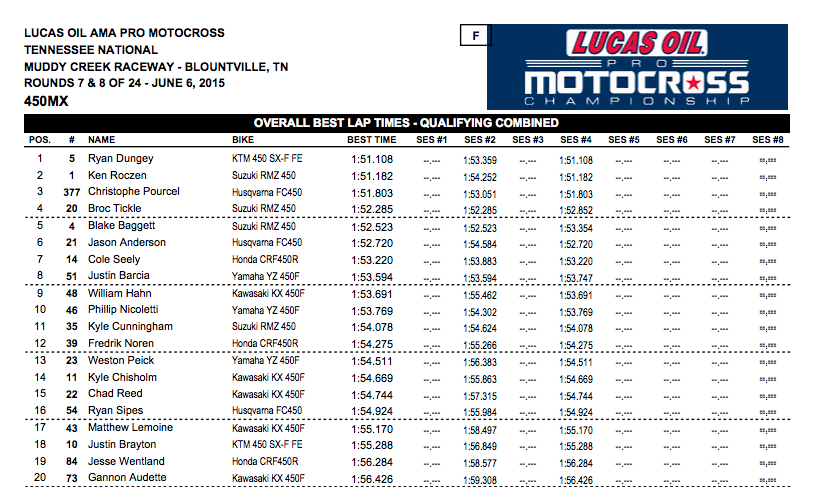 Jeremy Martin and Marvin Musquin cruised around for the first few laps of the second 250 A qualifying session. Chris Alldredge, Jordon Smith, and Zach Osborne all held the top spot at one point, but J-Mart put in another scorcher late in the game to take the Bud Light Fastest Qualifier. Joey Savatgy and Marvin Musquin laid down some fast times two laps later to claim second and third fastest this morning.

Christian Craig wasn’t able to pull a repeat of last weekend’s qualifying times, but he landed in eighth at the end of the morning. We’ll see if he still has some late-moto charges in him with the humidity factor this weekend. 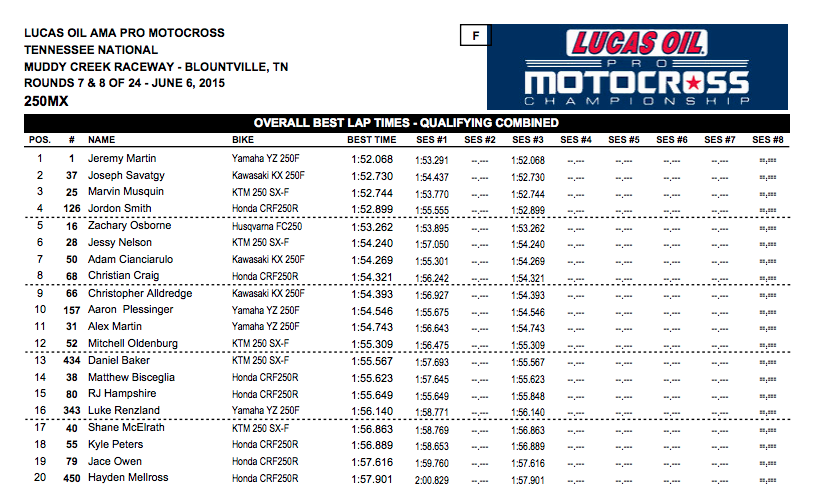 The 450 A group riders took the track in the second session of the day and Freddie Noren slotted himself into the top spot early on. He had the entire JGR team of Phil Nicoletti, Justin Barcia, and Weston Peick following up with fast times in the opening laps. Ryan Dungey put himself at the top of the board for a couple laps before Suzuki riders Broc Tickle and Blake Baggett knocked him down a few spots. Ken Roczen broke into the top three for a brief period but ultimately fell back to seventh, leaving Tickle and Baggett to rep the yellow bikes up front. They were the only two riders to land inside of the 1:52 range, so we might see some strong rides from them today if they can nail a couple of starts.

Right after the sight lap, the 450 riders immediately began testing out the revised amateur finish line section. Following the first tabletop is a double/tabletop combination that a brave few were trying to quad in the opening laps. Ryan Dungey was the first rider we noticed trying to pull the trigger on the long combo, but some of the others to follow suit were Wil Hahn, Weston Peick, and even privateer Dylan Slusser. Nobody cleared it in the first attempt and landing before the tabletop’s knuckle looked rather brutal, even with factory suspension. The downside is pretty mellow, so the harsh impact wasn’t met with high consequences. Dungey was the first to pull it clean today.

Fantasy Alert: Josh Grant is here today, but won't be riding. A crash in the second moto at Thunder Valley will require minor knee surgery for the TwoTwo Motorsports rider. Get well soon, Josh. 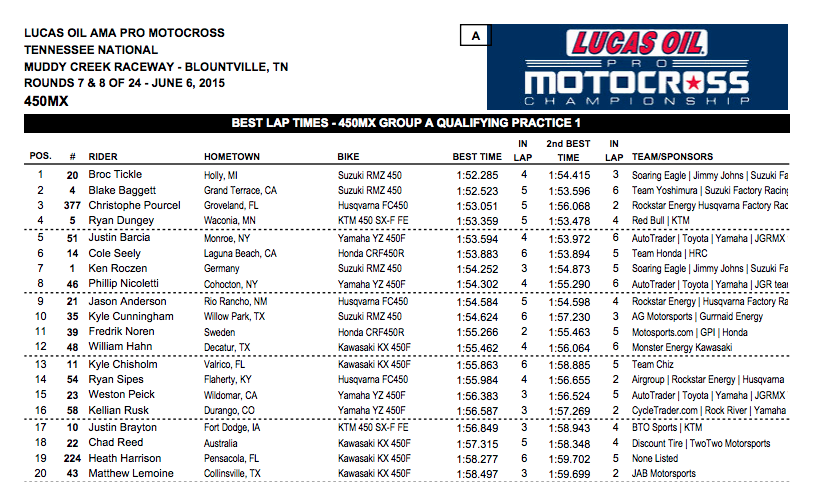 As for the 250 A group, Jeremy Martin sat on top of the leaderboard for most of the first session. Marvin Musquin claimed it for a couple laps, but Martin owned the lead on the last lap with few riders on the track. That late run was a heater, too. Martin put in a lap time over two seconds faster than Musquin! Also, Alex Frye is making his pro debut here today at Muddy Creek, and he slipped inside the top twenty on his fourth lap.

The 250 riders were pulling the Bomber Triple here and there and it wasn’t uncommon to some guys casing it. We’ll probably see more consistency in the next session. The quad that some of the 450 riders were doing will most likely not be an option for the 250 guys today, but we’ll see what happens as the track dries out. 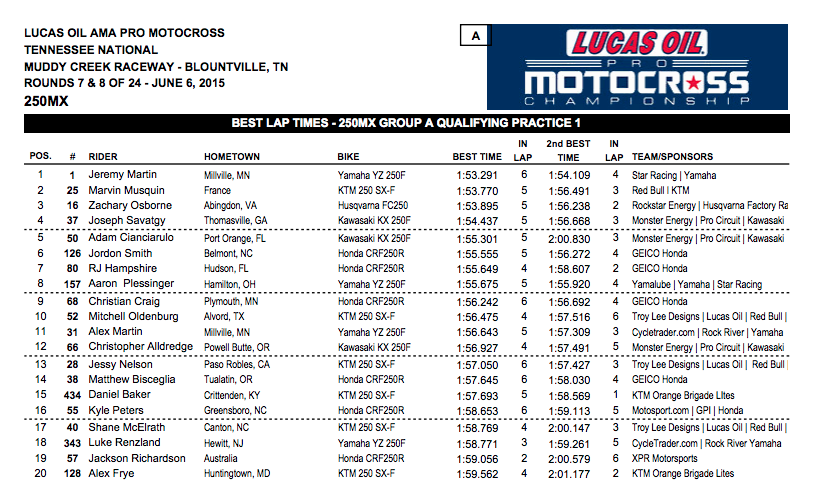 It's very, very foggy here at Muddy Creek Raceway this morning. It looks like a scene from a horror flick and the drive to the track was actually pretty sketchy. You couldn't see more than 50 feet in front of you! The track crew was easy on the watering since the sun won't be showing any time soon, so the early sessions will experience conditions that are dryer than usual.