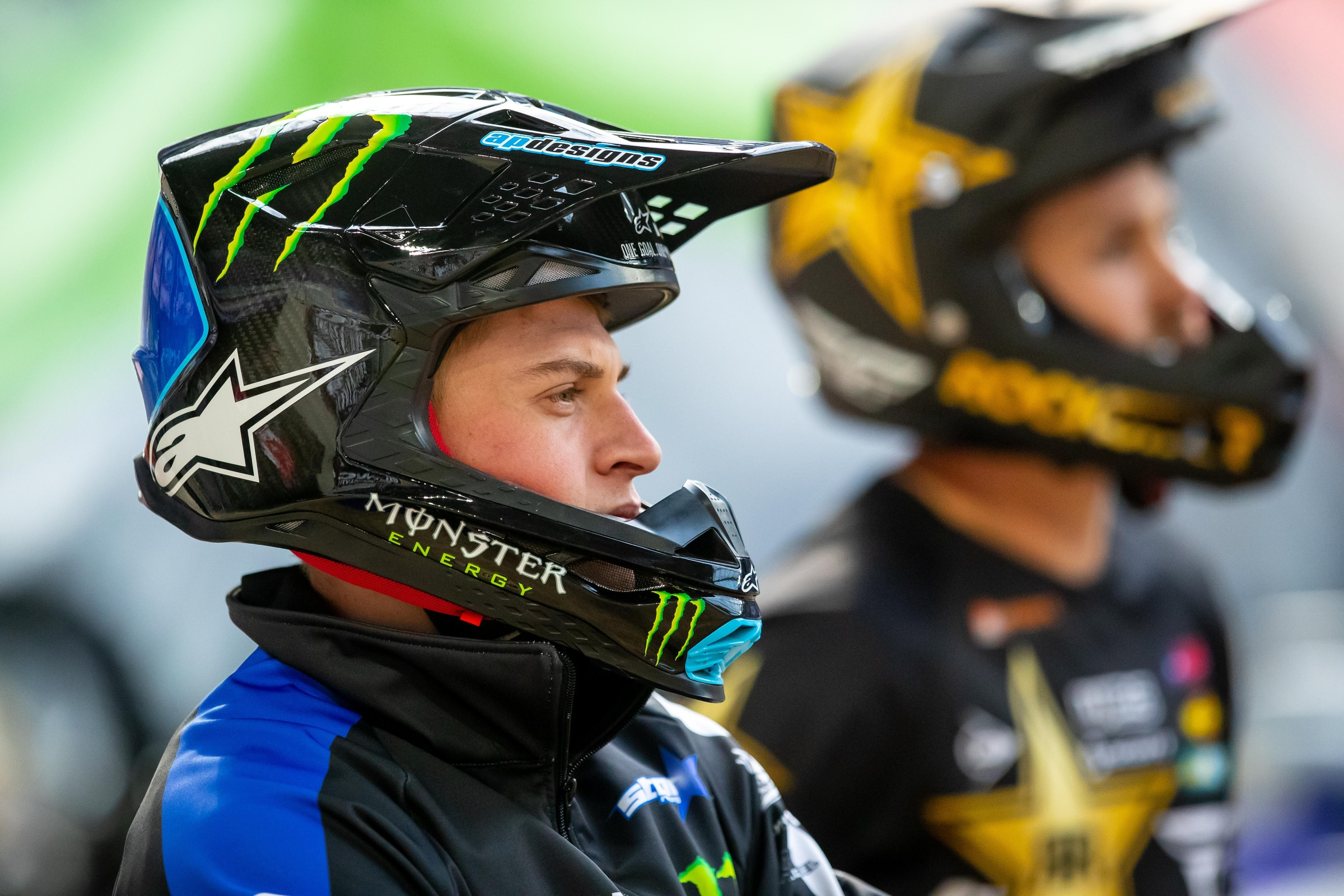 Last Saturday, Jeremy Martin earned his first podium finish of the early 250SX East Region championship. Martin finished fourth at the season-opener in Minneapolis, Minnesota, but then finished 9-2-3 in the three Triple Crown races to earn second overall on the day at the Arlington Supercross. Although he ran into mistakes early in the first race, going down in the second turn while trying to avoid a downed Jett Lawrence and then running up the back of Jace Owen, Martin was solid in all three races. His second-place finish was his 20th career 250SX podium finish.

Our Jason Weigandt asked Martin in the Arlington Supercross post-race press conference if he was happy with his riding so far through the first two rounds.

“I think my riding, it’s not bad but the first two rounds, I don’t feel like I’m riding like I do during the week,” Martin said. “Obviously, I’ve got the tracks down at the Carmichael [GOAT] Farm, or the Star Farm now. But I’ve been hammering down pretty good there. So, I’d like to bring that game to the race day and be up front battling with the boys a little more. That’s the beauty of sport. There’s practice and then there’s race day. The truth is, I need to be better on race day. That starts during the week, and then you’ve got to execute it on the weekend. Two rounds in and it’s time to start being better.”

Following the second round, Martin sat third in points with 42, only five behind the tie for the points lead between Jett Lawrence and Cameron McAdoo (47 points apiece) as Monster Energy AMA Supercross heads to Daytona International Speedway for the 52nd running of the Daytona Supercross. Martin, a two-time Lucas Oil AMA Pro Motocross Champion, has excelled at the speedway previously: he won the 250SX main event in 2016 then finished second in the 450SX class the following year in 2017, plus has four more podium finishes in the 250SX Class main event in 2013, 2015, 2018, and 2020.

The Minnesota native was asked about his thoughts on the upcoming Daytona round in the post-race press conference. Here is what he said:

“I’m pretty cranked for Daytona. I’m pretty excited it’s this early in the season. I’ve been riding supercross for a long time, so any chance—you guys know me. I love outdoors. I love to hammer. So, any chance I get to do the Daytona thing, it’s obviously part supercross, part outdoors, hit some sand turns and stuff like that. I’m looking forward to it. It’s going to be a nice little break. Hopefully we can be up front with the boys here and put on a good show.”

Martin was in a perfect position heading into Daytona and had momentum from his solid night in Texas.

Unfortunately, our Steve Matthes learned Martin is having issues with his labrum in his left shoulder following a practice crash this week and now Martin will be forced to the sidelines for the race at what would be safe to say is his favorite supercross venue. This was confirmed from the team today, also announcing supercross rookie Levi Kitchen will be sidelined as he continues to recover from a hard crash in Texas that ended his night early.

Below is the statement from the team:

The 250 East boys will be sitting out this weekend’s @supercrosslive in Daytona. @JeremyMartin6 was injured yesterday in a practice crash and @levikitchen147 is still recovering from his crash in Arlington last weekend. An additional update will follow once available. pic.twitter.com/VzjpR8Dy9s

Matthes also provided some more information, stating J-Mart most likely needs surgery for his injury and Kitchen suffered a significant knee injury on top of the already-known hit to the head in his crash.

J Mart's got a labrum injury in shoulder, most likely needs surgery, The Chef has a broken kneecap from his crash in Dallas. https://t.co/xAQIKk5EMa

It seems our title after Arlington “Martin’s Right There” did not age well. The 2022 250SX East Region championship is once again a nine-round series (with two East/West Showdowns), so Martin missing at least one round will likely take him out of the title fight. If he does indeed get surgery, his supercross season will be over. This is a tough blow to the 250SX East as Martin is the second veteran this week that is now out with injury, following Austin Forkner announcing he suffered a broken collarbone in his crash with Jett Lawrence in Arlington.

Last year, Martin made his return to the Monster Energy/Star Yamaha Racing team after a handful of seasons with GEICO Honda, but he went down in the first rhythm section in the main event at the opening round, not even completing one lap before his season was over due to a dislocated shoulder left shoulder. He rested up and came out swinging in the Lucas Oil AMA Pro Motocross Championship, winning two of the first three motos before a crash and more injuries. The #6 but ran into more issues with his shoulder and a wrist injury, which ultimately ended his season because of a broken wrist at the tenth-round Ironman National.

Kitchen finished ninth his his AMA Supercross debut but suffered a big crash in the first race of the Triple Crown in Texas. He sat out the remaining two races of the night and officially scored 22-22-22 finishes for 22nd overall. Kitchen's mechanic Konner Croushorn was riding the #59 Yamaha YZ250F to the pits when a golf cart pulled out in front of him, leaving him with bumps and scraps and an injured knee. Then, Kitchen suffered his crash in the first race. Rough day for the #59 squad.