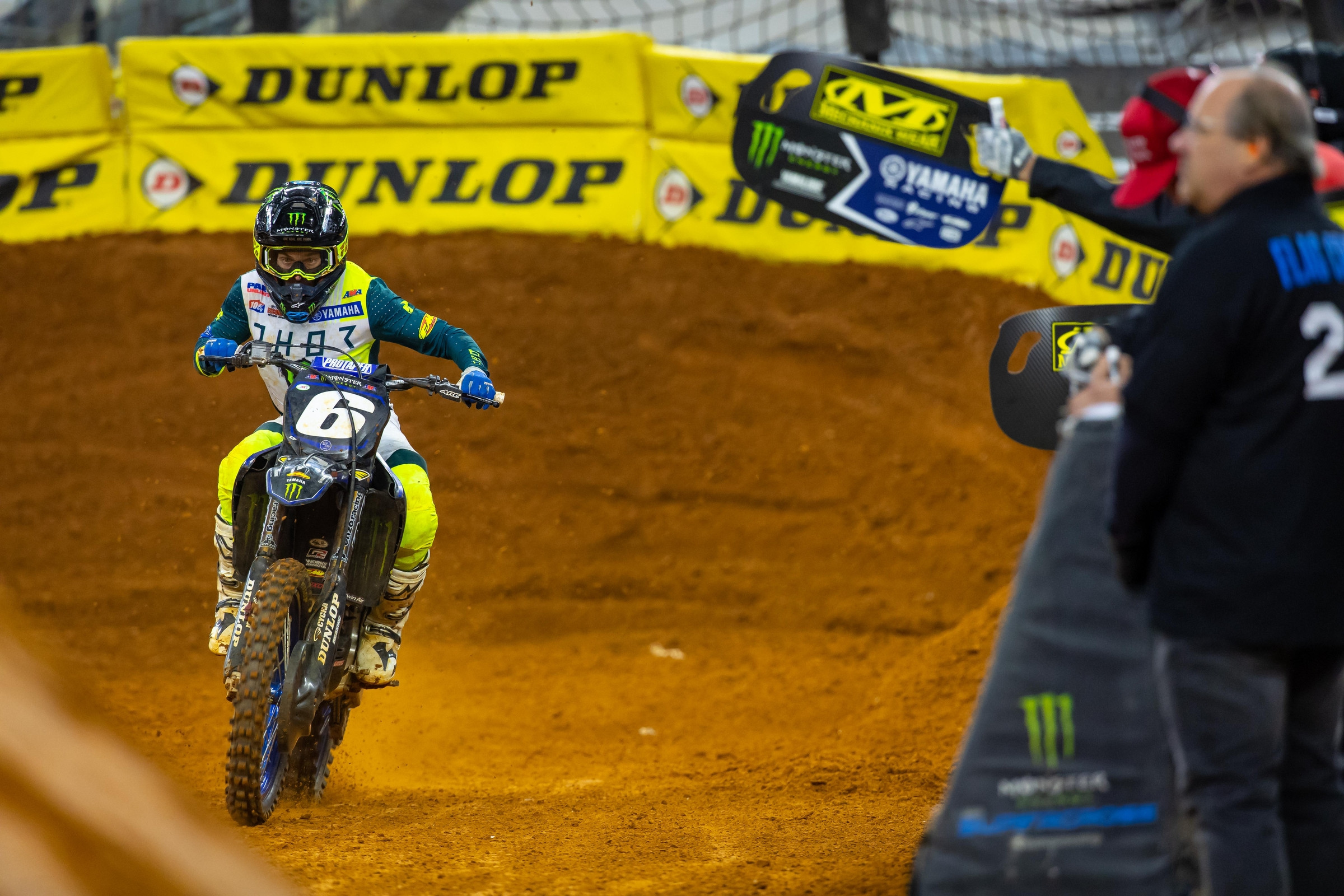 Quietly, Jeremy Martin is still just five points down in this 250SX East Championship through two rounds. His fourth at the opener was a so-so performance for the two-time Lucas Oil AMA Pro Motocross Champion, and Saturday night’s Arlington Supercross saw him on the ground early in the first race of the Triple Crown. Despite that, Martin put his head down and charged the rest of the night to put up 9-2-3 scores and earn second overall on the night. After a whirlwind evening at the races, Martin spoke with the media in the post-race press conference.

Jeremy, tonight you had your incidents throughout the evening, but you said you wanted to go to the 450 class to get away from the chaos that was tonight. It just seemed like everywhere you looked there was something happening.
Jeremy Martin: Yeah. The 250 class is pretty dang wild. It’s wild in the 450, too. It’s the nature of the beast. It’s supercross. You guys throwing the triple crown in there and make us riders drop three gates and we’re all close in speed and we’re all competitive. It gets a little wild out there. The track breaks down. I practiced quite a bit of whoops this off-season, but I tell you what, you show up there on race day and you see… After the 450 main event, I walked over here for the press conference and I was looking at the chuck holes that were in them and I was like, wow. So, it’s a tough game.

Kind of looking past this weekend coming into the next round, of course Daytona, a round that probably a lot of people would say you are a favorite to win, due to your past results there and being more of an outdoor guy yourself. Are you stoked that it’s this early in the season? How much really goes into this next week for you? Does anything really change in your mentality, your training program, bike setup, et cetera?
I’m pretty cranked for Daytona. I’m pretty excited it’s this early in the season. I’ve been riding supercross for a long time, so any chance—you guys know me. I love outdoors. I love to hammer. So, any chance I get to do the Daytona thing, it’s obviously part supercross, part outdoors, hit some sand turns and stuff like that. I’m looking forward to it. It’s going to be a nice little break. Hopefully we can be up front with the boys here and put on a good show.

You just missed the podium last week. The math worked out in your favor, and you got on the podium this time. How do you feel about your riding? Are you happy with the way you’re riding, or is there more you think you’ve got to get over the next couple weeks?
I think my riding, it’s not bad but the first two rounds, I don’t feel like I’m riding like I do during the week. Obviously, I’ve got the tracks down at the Carmichael [GOAT] Farm, or the Star Farm now. But I’ve been hammering down pretty good there. So, I’d like to bring that game to the race day and be up front battling with the boys a little more. That’s the beauty of sport. There’s practice and then there’s race day. The truth is, I need to be better on race day. That starts during the week, and then you’ve got to execute it on the weekend. Two rounds in and it’s time to start being better.

Race three you had a moment coming out of the whoops where I thought you might torpedo; I think it was [Mitchell] Oldenburg. How was your heart rate? How were you feeling?
Yeah. I’ll tell you what. In practice I crashed in those. My foot blew off and I was just riding a mechanical bull, dude. I just let it go. Then in that main, I knew I needed to get Oldenburg for the podium, and we got pretty wild there. I wasn’t trying to run it in that hard on Oldenburg. Hopefully he goes back and sees the footage and sees that I was just holding on for dear life.