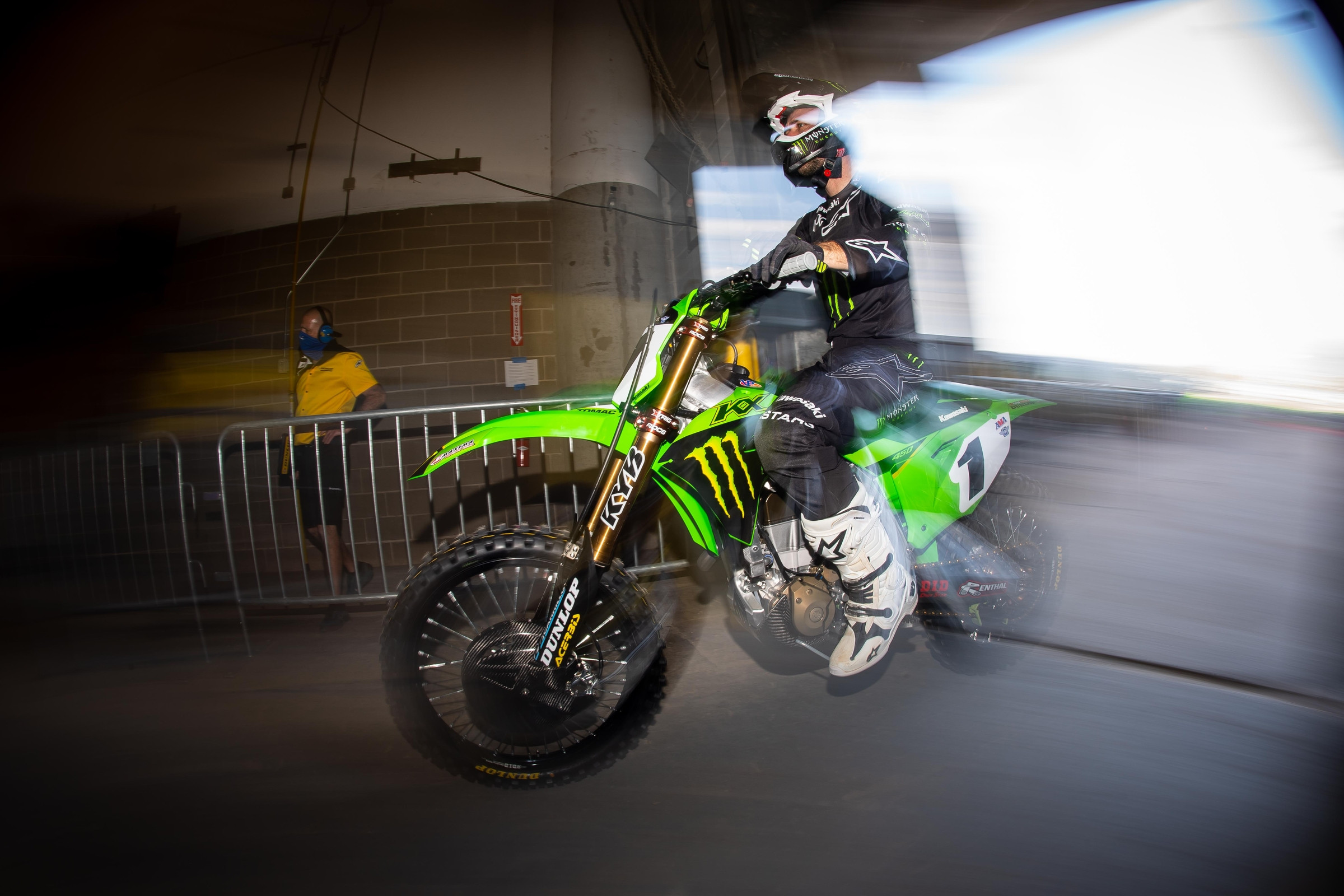 Hey, you know who won the 250SX West opener last year? Same guy who won it this year, Justin Cooper. Surprisingly, Orlando 2 was the first race Cooper won since winning Anaheim 1 in 2020, giving him the unique designation as a rider who’s won multiple supercross races, but only season openers. He sure looked great in Orlando though, and if he keeps it up he’ll be racking up more wins, and soon. Our Jason Weigandt talked to Cooper earlier in the week, and Cooper admits it’s hard not to think about the point standings already when so many top contenders—like the Martin brothers and Jordon Smith—are dug into big holes with points and injuries early in the year. Cooper stayed in Florida the whole time between Orlando and Daytona and hopes to keep padding his lead at round two. -Hansel

The absence of Garrett Marchbanks on the Monster Energy/Pro Circuit Kawasaki squad in 2021 certainly has made for some interesting bench racing and eyebrows raised in curiosity. What it apparently hasn’t done is hamper Marchbanks’ speed. The ClubMX rider piloted his Yamaha to a podium finish at the opener, something he’d only done three times prior since turning pro in 2019. Is this something Marchbanks can maintain as the season progresses? We’ll see if he keeps it going in Daytona, the site of his first, and only, win as a pro. –Hansel

Ken Roczen is still leading the 450SX championship, but after Orlando 2, you’d be forgiven for thinking Cooper Webb is in the driver’s seat. The Red Bull KTM rider was fantastic at the last round, and after taking the lead away from Adam Cianciarulo, led the remaining fifteen laps without any real pressure from anyone. He took a big chunk out of Roczen’s lead too, thanks to Roczen finishing fourth following a horrible start. Right now it's looking like it's going to be an all-out brawl between these two as we enter the second half of the season. Who’s going to come out on top in Daytona? -Hansel

Jason Anderson has been showing some real signs of life lately. Not only has he been notably stronger in the closing stages of the races, but he also notched his best result yet at Orlando 2, a fifth place. Yeah, it’s weird to say a top five is the 2018 champ’s best finish so far, and it’s even weirder when you realize he hasn’t won a race since 2018, but the important thing for Anderson now is that he seems to be surging. If he keeps it up in Daytona he could get on the box for the first time this season, and take another step toward finally getting back in the winner’s circle. -Hansel

Anderson isn’t the only rider who’s been making strides lately. After a rough start to the season (except for a third place at the opener), Marvin Musquin’s luck seems to finally be turning in his favor. The Red Bull KTM rider has had two podiums in the last three races, and after his second place at Orlando 2, was very positive about the way he felt on his motorcycle. When Musquin is feeling it he’s very, very good, and by the looks of things lately he sure seems like he’s going to be a factor up front from here on out. -Hansel

I also asked Eli if his strategy now is to use Daytona as a springboard to a second-half surge. “I hope so!” Eli said. “It’s all I can hope for and all I can go for is to win at Daytona to try to get something going. I’ve kind of had a, I don’t know, a kind of so-so first half to the season, right? At least for my own expectation. Only having one win at this point, and we’ve had a handful of fourths or fifths. Yeah, I need to get this going.” –Jason Weigandt

Dylan Ferrandis put in an amazing ride at Orlando 2, but hardly anyone saw it. He stopped in the mechanics’ area early and pulled back onto the track just ahead of race leader Adam Cianciarulo. Then Ferrandis logged fast laps for the entire rest of the 450 main event and was never lapped. He basically went as fast as the leaders for the entire main event! Ferrandis doesn’t have a lot of Daytona experience because he’s ridden 250SX West the last two years but he did podium the race in 250SX East in 2017. He says his team has been riding at Ricky Carmichael’s old place in Florida the last few weeks and has made big strides in testing with the YZ450F. “No excuses, it’s time to get the results,” says Ferrandis. Could he visit the podium on Saturday? –Weigandt

Well, they say if you don’t like the weather in Florida, just wait a few minutes and it will change. Weather reports show a strong chance of rain on Saturday, but showers in the Sunshine State are often spotty, and then followed by, well, sunshine of course. So there’s a chance of a mudder on Saturday, but also a chance the track survives. Somehow, we’ve seen most of the 50 previous Daytona supercrosses go through without a ton of mud. Will that be the case again, or are we in for a Saturday slop fest? –Weigandt

There are tons of rookies in this 250SX West field, and the best at the Orlando opener was Monster Energy/Pro Circuit Kawasaki’s Seth Hammaker. He was second fastest in qualifying and then took sixth in the main after getting knocked down by Marchbanks (Marchbanks said that was an accident, and not revenge on a rider who rides for his old team). Hammaker showed good speed throughout the day and night in Orlando, and he’s familiar with Daytona after years of competing—and winning—there at the Ricky Carmichael Amateur Supercross (RCSX) at Daytona. –Weigandt

What about that ton of other rookies? Daytona will probably feel a little more familiar to riders with more experience with motocross than supercross, plus many young riders in the field competed here as part of the RCSX mentioned above. The likes of Stilez Robertson, Nate Thrasher, Jarrett Frye, Dilan Schwartz, and Ty Masterpool will look to improve on their Orlando runs at Daytona. Can they do it? –Weigandt