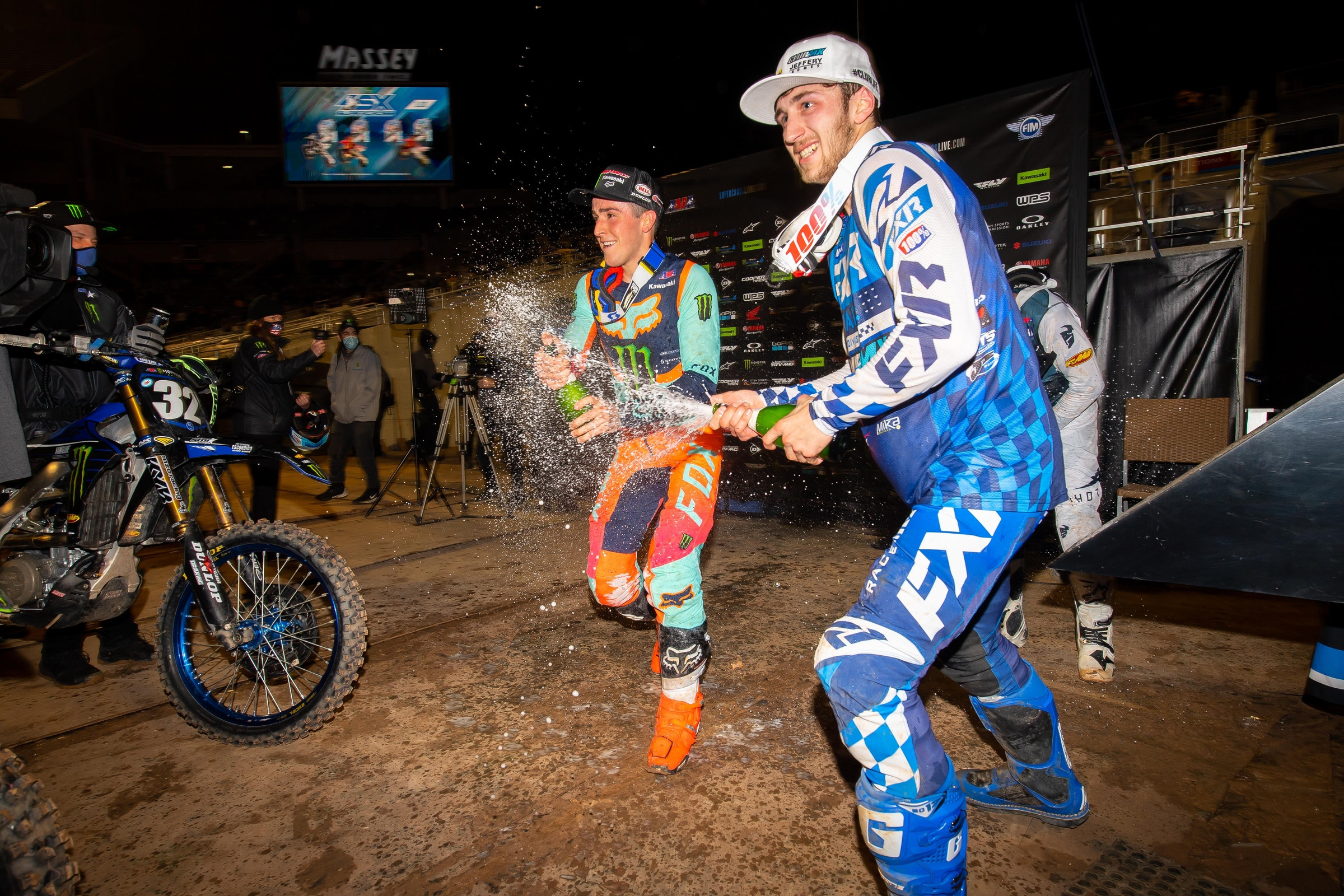 The 250SX West Region season opener saw an unfortunately large number of injuries and rough evenings stack up for many riders. Through all of the chaos, Monster Energy/Pro Circuit Kawasaki’s Cameron McAdoo and ClubMX Yamaha’s Garrett Marchbanks were able to land on the podium on the night. McAdoo did have one of the strangest circumstances happen to him in what turned out to be the first start of the main event when he collided with a medical worker attempting to cross the track, but he regrouped for second on the night. Marchbanks was making his debut with the ClubMX team after being left without a factory ride for 2021 and the podium was monumental in many ways.

Both riders spoke with the media via Zoom following Saturday night’s action.

Racer X: Can you give us your assessment of what happened with that medic? I know the social media kind of blew up over that. Can you give us what you saw?
Cameron McAdoo: Yeah, actually like Justin [Cooper] had said, it was pretty crazy. We started getting red cross flags before we even made it to the triple, so we were all obviously rolling, wheels on ground. I came in and I just followed Justin into the corner and actually one of the medics, after Justin went by, had jumped across and was trying to get across the track to Alex [Martin]. When he did that, he jumped right into my front wheel, and my front wheel bounced off the medic. I think my peg clipped Alex when he was laying there. I just had nowhere to go. I was rolling into the corner, but he just jumped in front of me. I don't think the medic saw me coming. I didn’t see him ready to jump in front of me. So that was kind of what happened. It was definitely a bummer situation. Like Justin said, it’s never good to see guys go out early. I went and checked on him afterwards. Hopefully, he can get back out there soon.

We’ve heard all this joking. West Coast is starting in Florida. This isn’t really West Coast. I think anybody that has seen this track the last two weeks knows that looks like the California test tracks. For you guys, did this feel kind of like you were at Anaheim 1, especially as the moisture came out in the dirt later in the night?
Yeah, a little bit. It kind of felt like when a test track does get baked out. We’ve been doing our best to actually kind of simulate some of the East Coast rounds with our test tracks at Glen Helen. Pro Circuit has a test track, and stuff like that. They’ve done really well with getting us some ruts to ride in. So, we’ve been riding both conditions, but it was definitely tough, like a couple of those guys had said earlier. I was heat one, and I came into the whoops lap one and I was like, okay, these haven’t been touched today. It got a lot of holes in it and it was slick, kind of like A1. It almost felt more like Salt Lake, honestly.

Another year on the team. Obviously, it’s a new bike this year. How has your comfortability with the team kind of helped you get the bike to where you want? How does that help you not only with your comfort with everybody but working to get the bike where you want to be?
I’m obviously really comfortable right now with the team. I can communicate pretty well with them now. Like last year was all new for me. I had a new trainer, Nick Wey, new team, everything like that. So now this year to be able to develop the new bike, I think the team understands me well. I understand the team well. Nick has a lot of knowledge as well to help me. So, the team has done really well with getting the bike where it's at already. I think we’re in a good spot altogether and this is definitely the best way to start a season. Just looking to do our very best each weekend and I think we’ll be in a good spot.

Coming into this series, did you kind of feel like maybe people overlooked you? A couple of the guys like Jeremy and Justin were preseason title favorites. Do you feel like you were maybe a little bit of an underdog role?
No, not really. I think that obviously there’s a lot of speculation on social media and stuff like that, but I do my best to keep clear from that. I know what I’ve done and the work I’ve put in. Everyone else in the class has put in the work, too. So, I think you just need to go race round one and do your best and it all pans out. I don’t really focus on that side of things. I know that all these guys are going to be really fast. They’re going to race hard. I’m ready to do the same thing. It’s exciting.

Racer X: Garrett, that’s fairly huge for you and for the ClubMX team. Talk about that a little bit, the move to that team and what the expectations were coming into here.
Garrett Marchbanks: It was pretty crazy, honestly. The time from the injury to I think the day I got released from the doctor’s, I actually flew to South Carolina to test the bike. Love it. After that, moved there, put the work in. I didn’t know what to expect, honestly. We just came into it and said, ride as good as you can. A top five would be pretty good. How the day started off was pretty rough. I just was not connecting with the track at all. By the heat races I finally started feeling the track and started to get the rhythms pretty good. Honestly, to get third place at the end of the night, I’m pretty pumped with that and so is the team.

The next round of this supercross season is going to Daytona, where you actually won. How confident are you coming into this next round?
Just to get the podium this weekend, I’m pretty pumped with that. So, I feel like just getting the momentum already going into Daytona. I’m pretty excited. I know when we go back to Club, we’re going to be riding some pretty similar stuff to Daytona. So that will be pretty good. I’m pretty excited for it.

You’ve used the fact that you did not get your Pro Circuit Kawasaki ride back, or any factory ride, as a lot of motivation. You had a pretty aggressive pass on [Seth] Hammaker. Was that a little bit of redemption? Just the night in general, was it a little bit of redemption?
For sure I’ve had a lot of motivation for this year, to get to where I’m at now. For Seth, I did not mean to do that intentionally. I was just racing and trying to get through the pack. I came from tenth, so I was just trying to pass every guy as fast as I could. My bad to Seth. I did not mean that at all. Racing is racing.