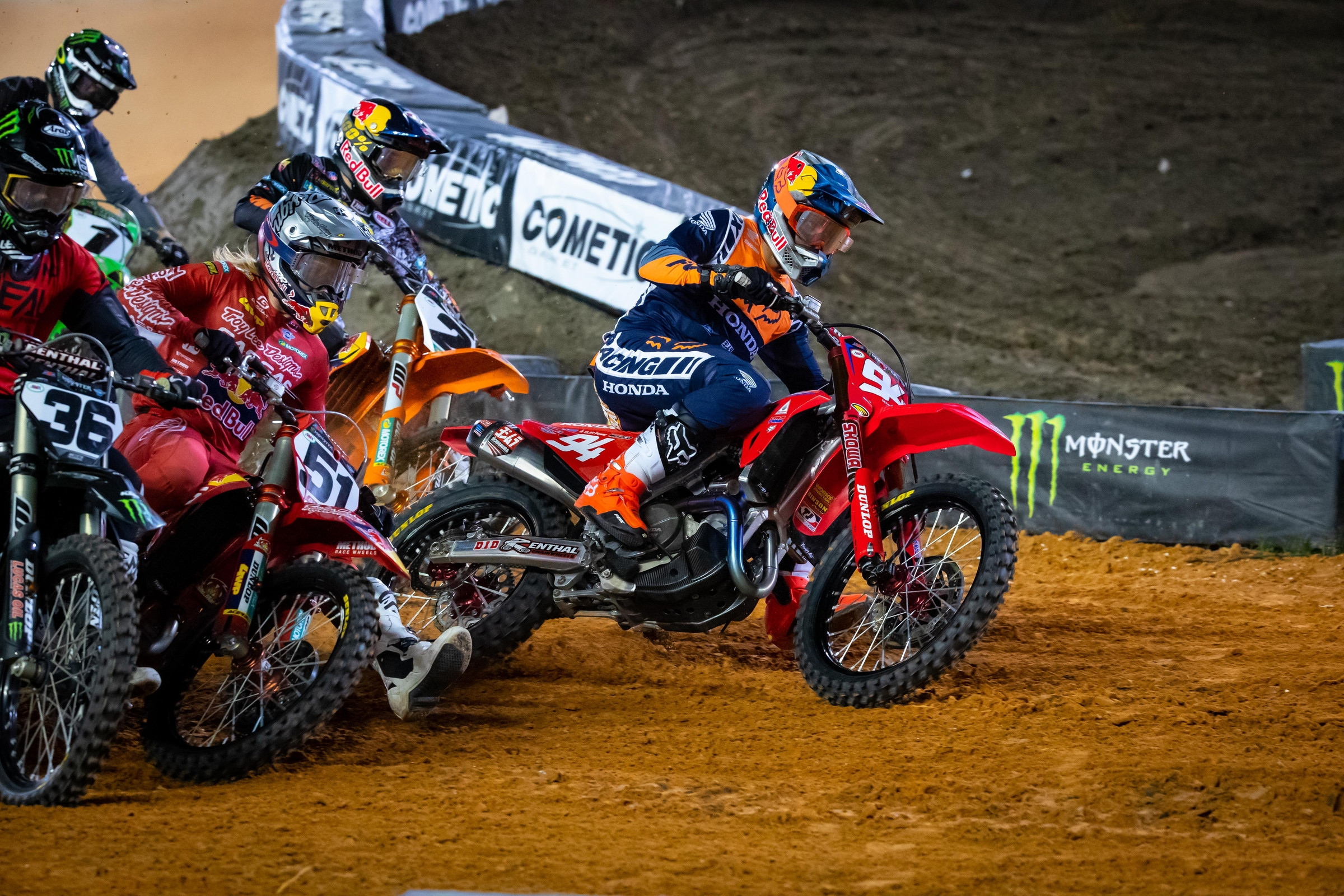 As aggressive moves go, this wasn’t near the top of the list. Might not really be on the list. We saw more aggressive pass attempts at this very race itself, let alone the other 699 supercross races in history.

But Ken Roczen has a right to be mad, and he’s not the only one who will do some talking.

This is the move everyone wants to talk about. Cooper Webb pushed Roczen high in turn two of Saturday night’s Daytona main event, and it had major implications on the championship. When you multiply this pass by its championship impact and the high-profile of Webb and Roczen you’ve got a recipe for real controversy. That’s what this really is. The move itself isn’t anything big, but what it represents is something much bigger, and that’s why it matters so much.

We’re entering the nitty-gritty here, with two competitors who have clashed in the past. There was that big crash in San Diego in 2018, where Roczen’s arm went into Webb’s wheel. They’ve had some very close races and finishes. Plus Webb’s wife used to date Roczen. That’s just facts, but the moto media is very friendly so we don’t usually report on personal stuff like that. You can form your own opinions on that topic, and it could be meaningless, because these two riders have done all they can to squash any previous beef. In interviews Webb and Roczen have had hundreds of opportunities to say something cross about each other. These guys are pretty unfiltered on a variety of topics, but they have consistently taken the high ground when it comes to talking about each other. Until this:

“I think he’s scared of me and I think that’s why he plays these kinds of games, but little does he know I like to play as well,” said Roczen after Daytona. “So from here on out I’m going to put in that little bit of extra focus, even at home, to be that much better on the weekends. He’s just fueling the fire and I’m ready for it.”

So much for taking the high ground.

So now we’ve got “the move” and “the interview” which will fuel this week’s (at least) story.

Earlier in the evening, Hardy Munoz attempted to go mega low on Ryan Sipes in a 250 heat race. Sipes got straight center punched and tossed off of his bike. He hurt his hand. But that’s just the crazy kids of the 250 class, Munoz the latest in a long line of aggressive young talent (Sipes, a veteran, unfortunately on the receiving end). Sipes posted on social that his old man body was very sore because supercross is no joke. He didn’t talk any trash on Munoz.

That was just a 250 heat race. It was way more aggressive but everyone moved on. Webb v. Roczen also wasn’t even close to the countless privateer v. privateer moments in the last chance qualifier. Almost weekly, violent crimes are both legal and celebrated. In the case of a LCQ all incidents are classified under “just a racing incident.”

That changes with high profile of two factory superstars fighting for a championship in a main event. Webb’s move—he went high in turn two and moved Roczen up, taking Kenny from a holeshot to about seventh—really impacted the race. Webb didn’t even really make contact, but the intent was clear. Roczen had to make up big ground and he did. He got all the way to Webb’s fender a few times, so one could argue he was the faster rider on the night, but in the end Webb got away with his usual late-race wizardry. Somehow on the last lap Webb even passed Aaron Plessinger (who out rode him for 99 percent of the race), putting another rider and some more points between himself and Kenny. Roczen might have been faster at Daytona, but Webb gained four points. This stuff matters.

As soon as the race ended, Roczen rode up to Webb and gave him an ear full.

“Yeah, when we got back, he was running his mouth, but I didn’t really hear what he said on the podium or anything,” said Webb. “He wasn’t too pumped, but I’m not too sure why. I saw an opening and went for it. He’s really focusing on himself this year, and clearly, he showed how much he’s focusing on himself.”

Once you’re into this type of stuff you’re playing Webb’s game. His 250 years were packed with mind games. This is an arena where he excels. So now you’ll hear accusations where Webb is in Kenny’s head. Honestly, though, Kenny rode awesome in the main and caught up to Webb from pretty far back. It’s not like Kenny fell apart after the turn-two incident, crashed a few more times and finished 12th. He rode with fire and he rode well. Long term, he might be better served to go back to what usually works for him, but in the heat of the moment, he got hot.

That’s okay. A title is on the line. Is he supposed to smile about this? Just not notice or care? If Kenny is getting heat for appearing like Webb is in his head, how much criticism would he get if his response was passive or non-existent? I will never criticize a guy for acting like he cares. We ask for riders to show personality and emotion but are too quick to criticize when they do. While Kenny has played the calm and casual mental game this year, he can only go so far. As always, when riders say they’re not overly focused on results, it’s only because thinking that way actually makes the results better. The results are always important, but the more important the results, the more important everything else becomes.