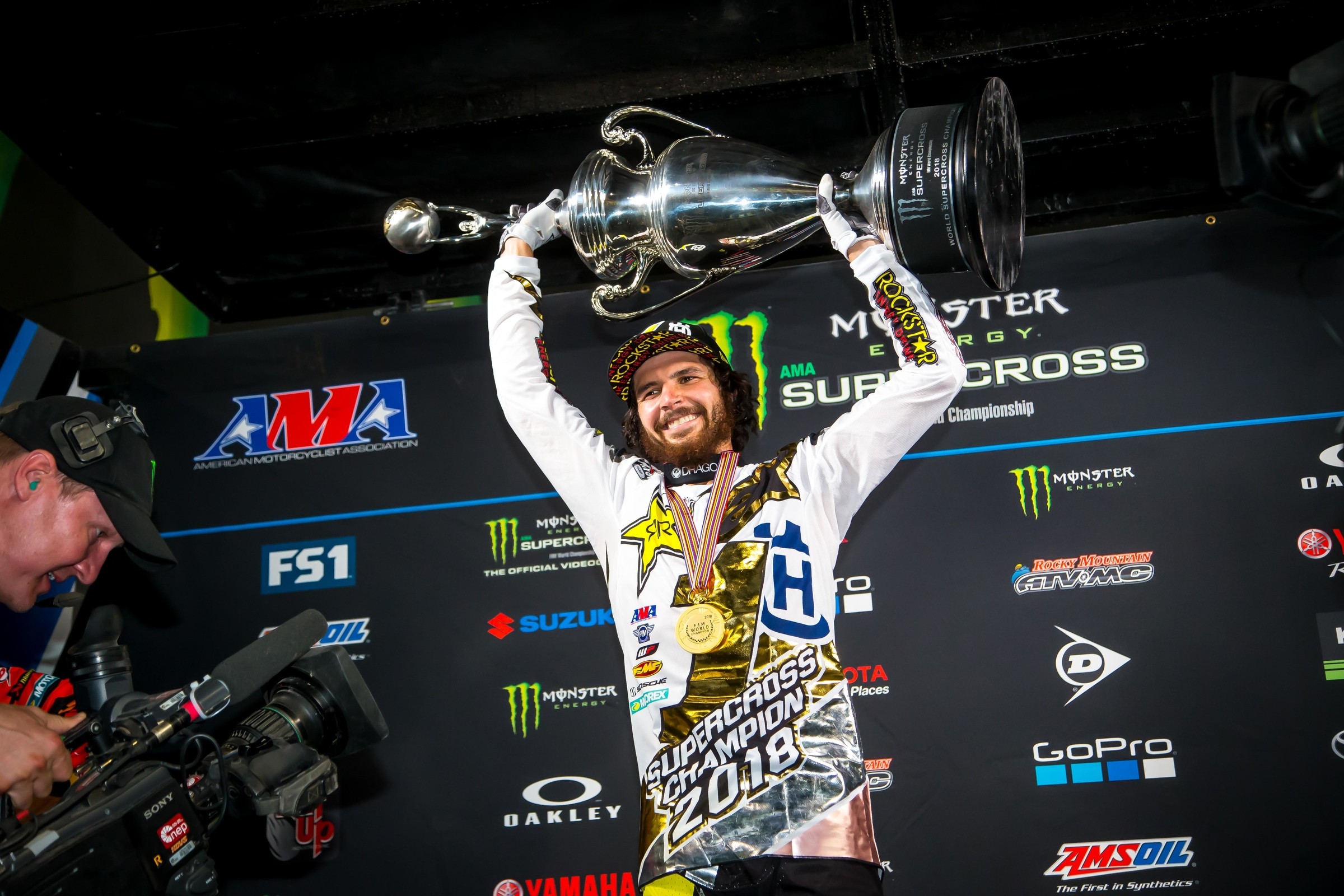 A week ago, Jason Thomas and I were planning our shoot for the Monster Energy Racer X SX Preview Show. ESPN was playing in the background, and we started talking about the endless fodder of sports debate shows, and how the mainstream games produce enough news to let these daily hot-take specials write themselves. We produce five Monster Energy AMA Supercross preview shows per year. ESPN makes five shows like that per day.

JT told me there’s just one dead time for these shows, the middle of summer, when football and basketball are dormant. That’s when you get random Wednesday shows that run out of content, and have to fall back on, “Is Lebron James the greatest of all-time?”

These discussions are ridiculous, though, because they often measure all-time greats in championships, AKA “rings” which is really unfair to an individual playing a team sport. Yes, the greats are supposed to carry a team to titles regardless of the talent around them. Ultimately, though, we’re talking about individuals playing a team game. The arguments seem clear, the discussion is actually quite murky.

Over here with dirt bikes, though, only one name appears in the record book. Every rider will say they can’t thank the people around him (enough), but those words fall on deaf ears. We talk about the athlete, about man against man.

It’s where we sit heading into the 2019 season, the sport still in transition after all-timers Ryan Dungey and Ryan Villopoto decided to hang it up. Superstars with names like Anderson, Tomac, Roczen, and Musquin are here—with more to come—but the take up always lags behind the results when new faces start winning. It’s always this way. When the Ryans started gobbling up all the titles, James Stewart and Chad Reed still moved the needle with the fans to a much higher degree. Part of this is because a single night of Stew/Reed contained more drama than five years of Ryan versus Ryan, but part is because the younger athletes are only piling up records as they go. The work in progress never looks as impressive as the piece that’s already done. In 2011, when The Ryans were battling Stew/Reed, we knew James and Chad were all-timers. We had no idea how great Dungey and Villopoto would prove to be.

By the time The Ryans were trying to prove they were legends, James and Chad already were. When Ricky Carmichael was pulling Jeremy McGrath from his throne, fans were not pumped. Then James got similar heat when he was going after Ricky.

Now we’re watching new riders compete for the big prize, and wondering, are they merely great, or are they all-time great?

The only way to prove it is, yup, with titles. That’s how greatness is measured. You can put the likes of Roczen or Tomac in a conversation of all-time talent or speed, but until they’re carrying a 450 Supercross Championship, any argument won’t last long. Anderson has one now, but was he amazing, or did others crash out? That’s the discussion for 2019. Dungey faced the same head wins when he won the 2010 title, when Reed, Stewart, and Villopoto ended up on the sidelines. Future titles erased doubts, and now we know Dungey wasn’t lucky, he was exceptional at being consistent. Case closed.

The other day we posted this quote from my recent Jason Anderson magazine story. The responses flooded in.

Not many people gave Jason Anderson a fighting chance of winning the Monster Energy AMA Supercross Championship last year—and that includes us. We won’t get fooled again. Read GUESS AGAIN exclusively in the February ‘19 issue of Racer X Illustrated starting on page 94. | Subscribe at RacerXOnline.com. @elhombre21

I’m not comparing Anderson to his current competitors here. I’m comparing his legacy. He already has a Monster Energy Supercross Championship, and for that he should be able to forever ride into the sunset, count the bonuses, and be considered forever a champion. You win the premiere supercross title, you’re in the bad dudes club. Riders like David Bailey and Johnny O’Mara have one supercross title, too.

But while Bailey and O’Mara will forever be identified as icons and legends, Anderson is only in the middle of his career, so he doesn’t get that level of respect yet. For now, it’s Anderson fans versus Tomac fans, or Roczen fans, Musquin fans or whatever. It’s all leading to a great mash up come Anaheim, with many riders believing this year could be theirs, because the numbers say we don’t have a multi-time supercross champion at his peak at the gate.

Or do we? An all-time great might be there, we just don’t have his total numbers yet.