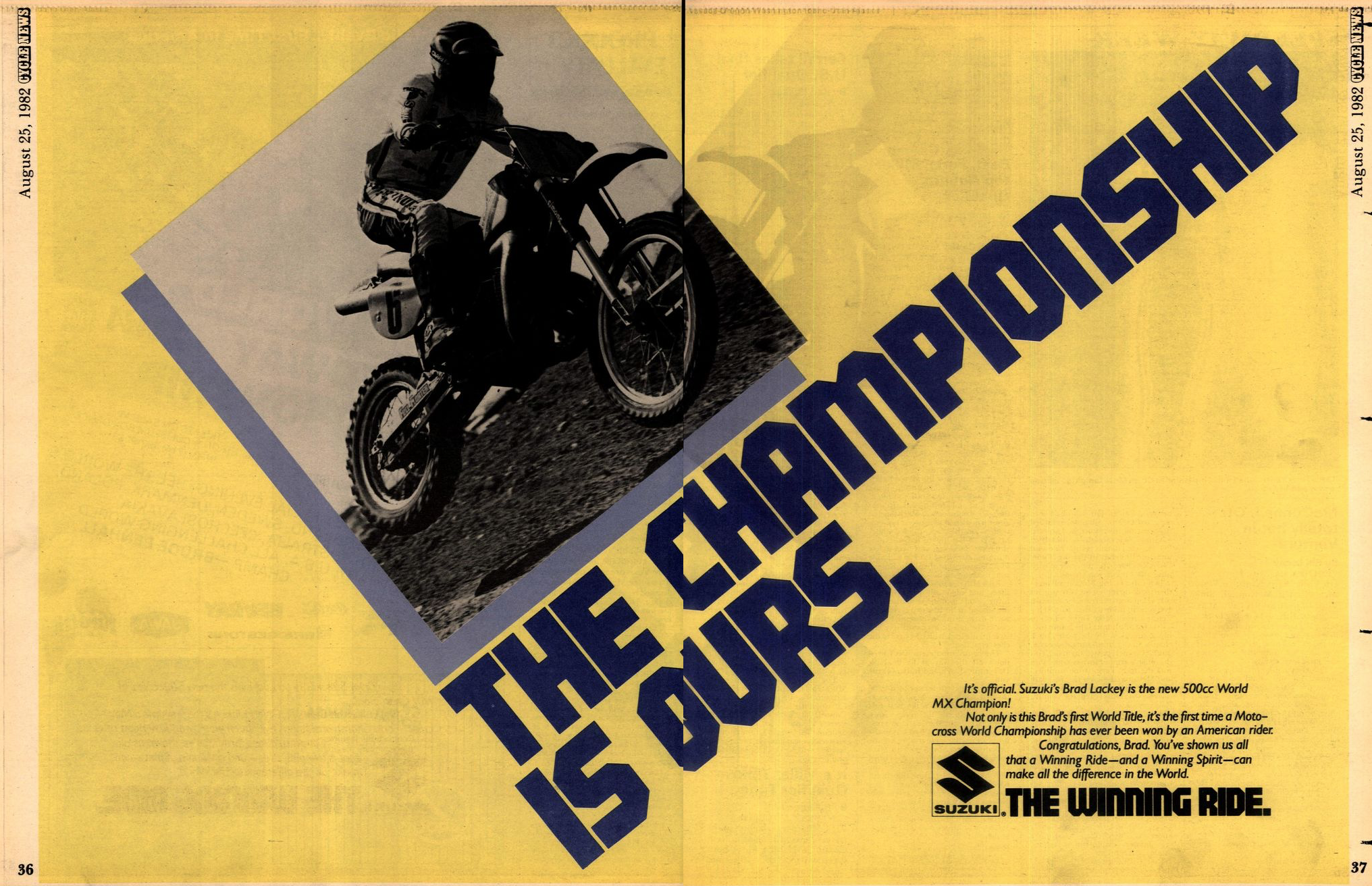 On This Day in Moto August 8

Roger Decoster clinched his fifth FIM 500cc Motocross World Championship by just two points over his Suzuki teammate Gerrit Wolsink at the series-ending Grand Prix of Luxembourg in Ettlebruck. The Man finished fourth in the second moto to just edge out Wolsink, who went 2-2 on the day. KTM rider Jaak Van Velthoven gave the brand its first 500cc Grand Prix win by sweeping both motos.

The race was marred by the crash of British Maico rider and future 500cc World Champion Graham Noyce, who was knocked off his bike at speed by a spectator who was hanging off the side of a tree. He was taken to a nearby hospital with suspected fractures in his back.

The 250cc World Championship was in Licthenvoorde, Holland, and Husqvarna rider Heikki Mikkola and KTM rider Gennady Moiseev split moto wins as they took their title battle down to the last round. Mikkola would clinch it from the Russian one week later in Sweden by just four points.

At the Washougal 500 National, Yamaha's Mike "Too Tall" Bell won the overall over local hero Chuck Sun of Team Honda, going 4-1 to Sun's 1-4. Finishing third was Goat Breker aboard a factory  Kawasaki. The Washougal wins turned out to be the last outdoor overall of Bell's career.

In the 125 Class, Kawasaki's Jeff Ward topped the veteran Bob Hannah on a Yamaha, as well as Honda riders Jim Gibson and Brian Myerscough. It was only the second win of Ward's stellar young career.

But the bigger news happened over in Luxembourg at the final round of the 1982 FIM 500cc Motocross World Championship. Suzuki's Brad Lackey completed his ten-year crusade to become America's first Motocross World Champion by finishing 2-3 at Ettlebruck aboard his Stig Petersen-tuned RN-82 works bike to clinch the title from his teammate, Belgium's Andre Vromans. It marked the first time a U.S. rider was ranked #1 in the world, beating Danny LaPorte to that epic milestone by just three weeks.

Yamaha's future 500cc World Champion Hakan Carlqvist would win the overall after Vromans blew his chances when he forgot a first-lap detour right off the start and began climbing a hill that was used on every lap but the first. By the time he realized his mistake and got back with the pack, he was in 17th place.

Incredibly, Graham Noyce—the very same Graham Noyce knocked off his bike by a spectator back in 1976—got hit in the hand by a spectator wielding a stake used to rope off the course, breaking a bone in Noyce's hand. It was reported that the spectator was angry with Noyce for having allowed Lackey to pass in next-door Belgium the week before and then winning the second moto from Vromans, harming the Belgian hero's chances to overtake Lackey in points. Lackey also reported having debris thrown at him.

Lackey would fly home to San Francisco the next day and be greeted at the airport by a small crowd of fans and race followers, hailing him as "First American" after his long quest to reach the top of the racing world.

Ironically, Suzuki and Lackey would part ways after the season, as the brand was slowly but surely getting out of Open class racing. He would race just one more time as a professional, riding a Yamaha and wearing the long-coveted #1 plate at the '83 Carlsbad U.S. Grand Prix, going 5-6 in the two motos.

On his way to what would be the last AMA 500cc Motocross Championship, Kawasaki's Mike LaRocco went 1-1 at Washougal to top the 2-2 of Honda's Jeff Stanton and the 3-3 of Stanton's teammate Steve Lamson.

Here is a home movie: