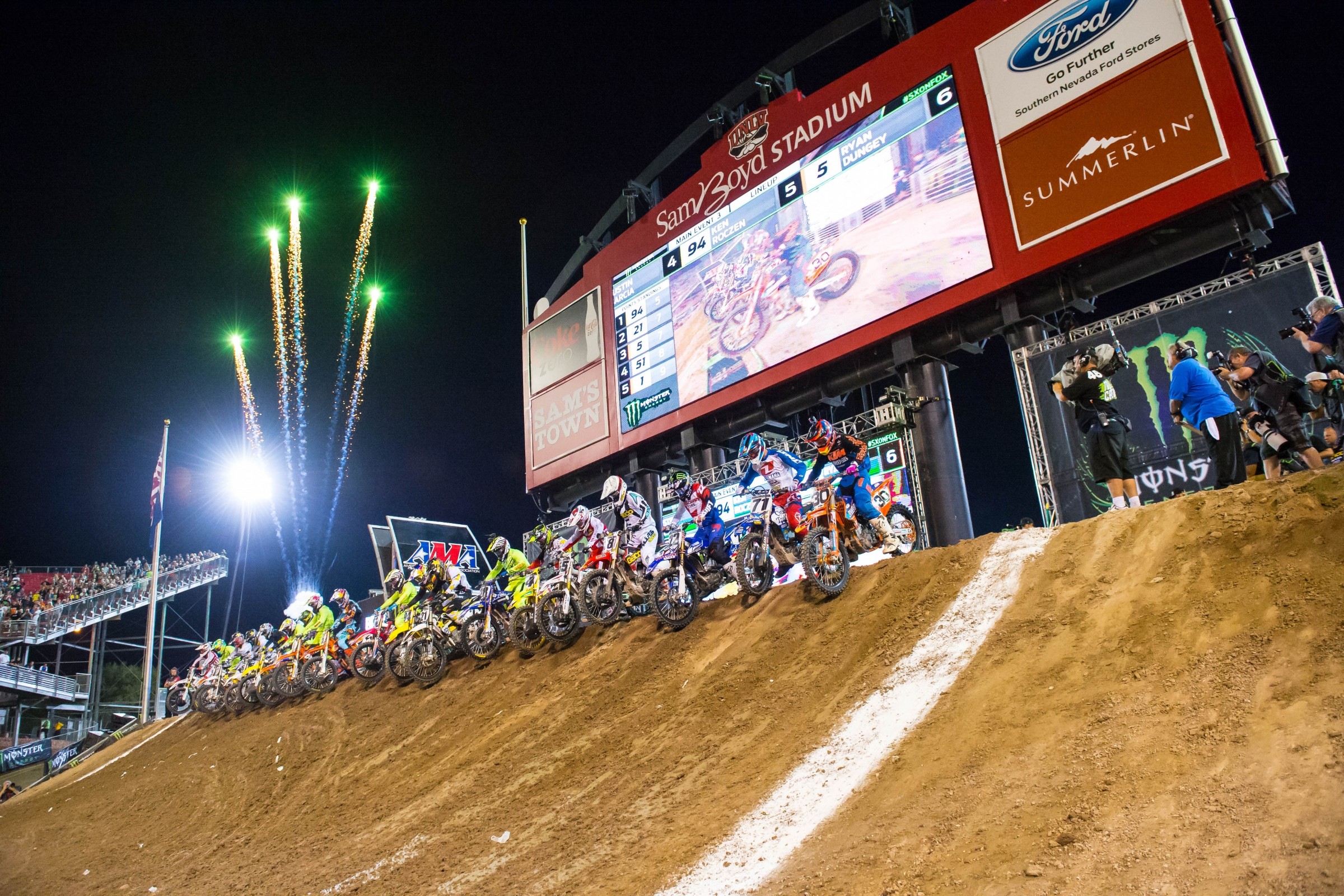 Bench Racing Ammo Change It Up?

Supercross is back this weekend! Well, sort of. The Monster Energy Cup is an interesting race but one that the promoters and sponsors desperately want to stand out and not just be seen as an 18th supercross. On the surface, they do well to separate things, but while I’m all about the format change to three mains and the addition of a Joker Lane (this year the Joker Lane will finally be faster than then regular track section, which makes so much more sense) this race is, for me anyways, pretty unmemorable.

I mean, the first year Ryan Villopoto won all three mains, collected the one-million-dollar payment then somehow complained about the payout of it; Ryan Dungey shifted his bike in the air twice one year, which was awesome, and a bunch of riders have forgotten to take the Joker Lane in the main event. Other highlights include … well, I’m not sure. I don’t think I’m alone in saying that this race comes and goes and along the way one eye is focused on enjoying the off-season and looking at Anaheim 1. The racing has been unpredictable and no one has ever won the event twice. The winner of this race isn’t automatically seeded as a favorite for the real Monster Energy Supercross Championship, though. So, all these years down, where are we at with the Monster Energy Cup?

This race has heritage back to the old U.S. Open, which was dreamed up stateside by Eric Peronnard who saw the spectacle that was Bercy SX in France and wanted to build something similar here. He ran the event at the MGM Grand Garden Arena in Vegas and set it up really as a party, where the racing almost didn’t matter. The purse (250K) was huge with an incredible 100K going to the winner. That was unheard of money back then, but outside of that potential Monster Million bonus, the purse remains the same today.

There were entire weekends where I never went outside at the U.S. Open, things were rocking and rolling on and off the track, and if you stayed at the MGM Grand hotel, you literally never had to leave. The tight confines worked like a charm for great racing and great times. Some riders didn’t show up but many did and when they did, it was often out of pick-ups or factory box vans. It was a cool vibe. Peronnard later sold the race to the guys that run supercross now (Feld Motor Sports, although they had a different name back then) and the race continued being a success.

Then four-strokes came in, the bikes outgrew the track, more and more riders didn’t show, the crowds started to slim, and then the entire race went away for one year. The U.S. Open had a good run but eventually it played out.

The jolt of the race coming back in 2011 was substantial. Now re-named the Monster Energy Cup it would be held in a real stadium where the regular supercross took place each May. The track was much different than a regular supercross, though. The initial hopes were that having a tamed down supercross track—notable by not having whoops—and adding some high-speed sections out in the back of the stadium would attract European riders and form some sort of “Supercross des Nations.” That’s ironic now because this race is one of the factors American-based riders mention when they stay away from the real live Motocross of Nations.

The Europeans never came; in fact, this year’s inclusion of 2016 MXGP World Champion Tim Gajser is probably the first real look at what this event was partially intended to do in the first place. That first race in 2011 featured main events that were way too long, but more big-name riders did show then the last few years at MGM. Then each year it seemed most of the big names did show, as the MEC provided a valuable place to do some real world testing with some of the equipment rules relaxed for one weekend (although the hope that teams would bring out radical, prototype full-works bikes hasn’t really happened). Still, the field is usually pretty strong here, more so than the MGM race in its final years.

The allure of the big purse from 1998 isn’t the same now, as salaries and bonuses are bigger than back then while this race keeps the same purse structure (outside of the Monster Million bonus for sweeping) that it had 19 years ago. Riders show up now but they’re all in the big semi trucks and things seem more like a regular 18th supercross race now more than ever.

This weekend Gajser is showing up which is cool, and Justin Barcia is a racing as a privateer—both of these statements would have thought to be absurd only a couple of years ago. To me, that’s interesting. Whether Eli Tomac can hold off Marvin Musquin isn’t, though. I saw that act for 29 races this past year. We’re in a bit of a transition with Dungey, Villopoto, and some other riders having retired, other riders being hurt or not having deals together yet.

Some ask, “Why mid-October for this race?” Maybe they now have a point. Peronnard used this date in 1998 to stay away from the other big money European supercrosses that dotted the globe back then. Well, those are almost all gone now with just Bercy (Paris) and Geneva left. Moving the MEC closer to Anaheim would offer a better preview for the fans and also make everyone a bit thirstier for dirt bike racing. It feels like the Lucas Oil Pro Motocross Championship just wrapped up and the Motocross of Nations … well, it literally just did. Heck, the bench racers of the world are still arguing whether or not Team USA will ever win that event again and now they’re forced up for air to see that the MEC is happening. Could be more buzz for this race a little later into the off-season.

The U.S. Open ran at the MGM Grand Garden Arena from 1998-2009. The Monster Energy Cup has taken place at Sam Boyd Stadium since 2011. Looking at that timeline, it might be about time to start thinking of putting a fresh coat of paint on this race before it too runs into the one thing that any event doesn’t want—irrelevancy. Or just an 18th supercross.

Moving the MEC close to Anaheim might be the jolt it needs to get back to being a hit that it used to be. Remember those GFI races that were held a few weeks before supercross every year? These were just local California races but they got serious attention because the new season was close and everyone was salivating for racing. One year Phil Lawrence won and then turned out to be a real surprise in the regular series also—the GFI race was so close to the season opener that it was a much more realistic test of what was to come.

The regular Monster Energy Supercross Championship is rumored to be changing formats at some races. If change is coming there, now is the time to take another look at the Monster Energy Cup as well. If nothing else moving the date might help Team USA at the Motocross of Nations. Now that’s a win-win!