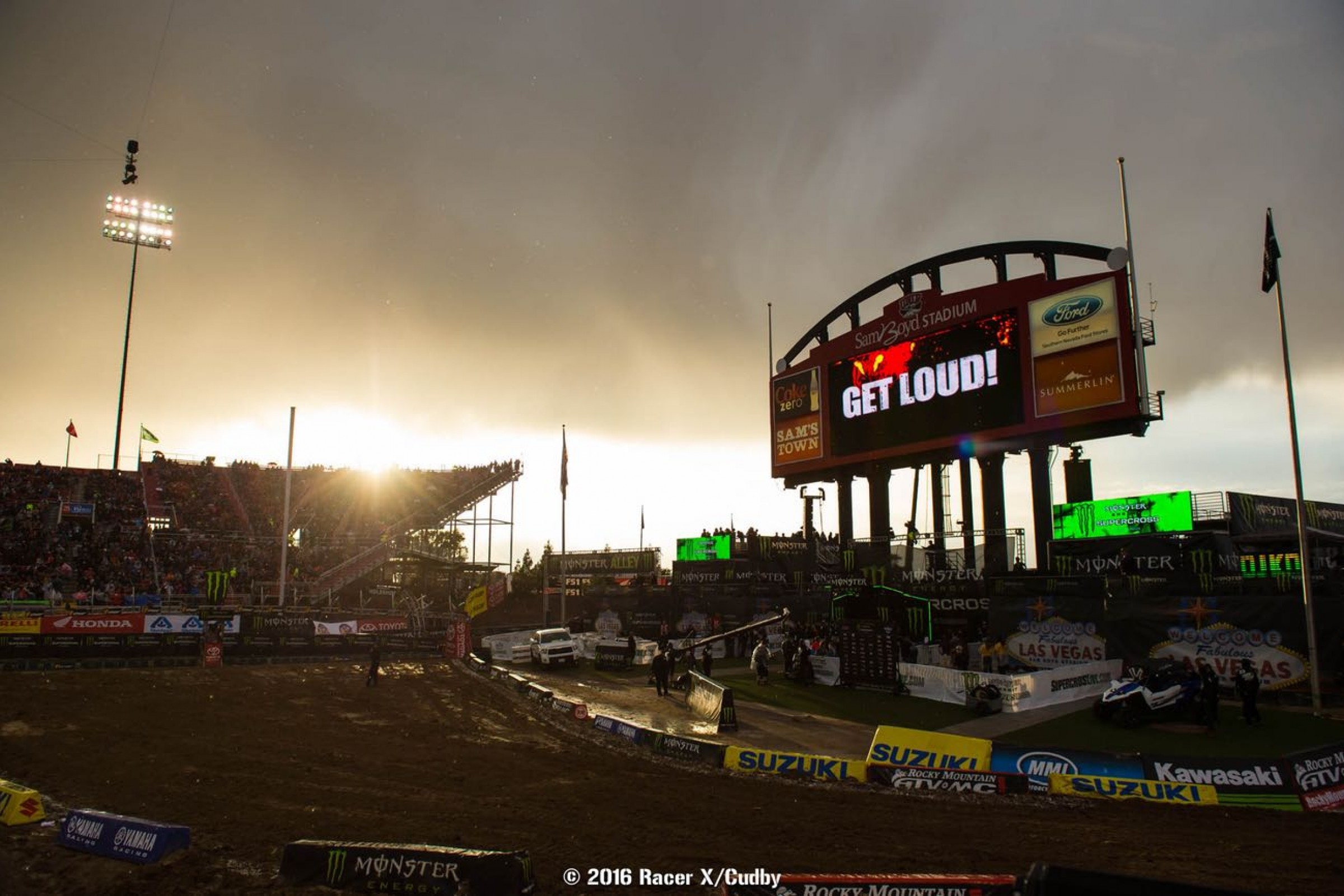 For Eli Tomac, winning is the only option in Las Vegas. So where does that leave Ryan Dungey? Since Tomac has more wins he’d be the champ if the two tied in points, so Dungey, who currently leads by nine points, can afford to give up eight points. That means if Tomac wins, Dungey has to finish fourth or better. If Tomac is second, Dungey would only need seventh or better, and if Tomac is third, Dungey could still clinch the title with ninth or better. Considering fourth is as far back as Dungey’s finished this season, things are looking pretty good for a three-peat. –Aaron Hansel

If you don’t know about the penalty handed to Joey Savatgy for cutting the track last week, go here. In a nutshell, instead of heading into the final round with a significant lead, Savatgy is now tied for second in points with Zach Osborne, and is just a single point behind leader Jordon Smith. As long as one of those three wins, we’ll have a true winner-take-all scenario. We broke down all the title scenarios earlier this week. -Hansel

The Dave Coombs Sr. East/West Showdown is always exciting. Who doesn’t like seeing how the best riders from either coast stack up in their only on-track meeting of the supercross season? But with The Showdown being a points-paying race this year, things are going to be even more interesting. Last week Osborne ripped through a bunch of guys to take the win, but if he has to do it again in Vegas, it’s going to be much more difficult with guys like Justin Hill, Shane McElrath, Aaron Plessinger, Martin Davalos, James Decotis, Austin Forkner, Mitchell Oldenburg, and more to contend with. Buckle up, this one’s going to be wild! -Hansel

Adam Cianciarulo’s title hopes are looking pretty grim, but just in case you’re looking to put some money on what he does does in Sin City, let’s lay out his title situation. He needs to make up 15 points on Smith, 14 points on Osborne, and 13 on Savatgy. In other words, if AC wins, he’ll need Smith to finish 11th or worse, Osborne 10th or worse (due to tiebreaker) and Savatgy ninth or worse (due to tiebreaker). Anything’s possible, but this one is a longshot at best. -Hansel

Much Ado About (Probably) Nothing

According to Red Bull KTM, team orders don’t exist—Marvin Musquin simply made an error, which is what allowed Dungey to retake the lead and gain three valuable championship points. The internet, on the other hand, disagrees, to put it lightly. Thing is, the three points Dungey gained from Musquin’s “mistake” will likely prove to be inconsequential. Had Dungey finished second to Musquin, he’d have six points on Tomac instead of nine, which means a top three for Dungey in Vegas would still be enough to win the title no matter where Tomac finishes. In other words, if Mr. Podium gets on the podium again, we can put away the torches and pitchforks. –Hansel

Dungey and Vegas, Match Made in Heaven

Since turning pro in 2007, Ryan Dungey has enjoyed tremendous success at the season finale. In 10 races (he’s never missed Vegas), Dungey has averaged a 1.4 finish. Further, he’s never finished outside the top two! Dungey has six wins in his 250SX and 450SX career in Sin City. As Hansel pointed out above, he hasn’t finished outside the top four in more than two years, so Tomac is already facing a steep mountain to climb, further impeded by Dungey’s success at Sam Boyd Stadium. –Chase Stallo

While he hasn’t quite enjoyed the success of Dungey in Vegas, Tomac has been no slouch either. In six races (he missed 2014 due to injury), Tomac has averaged a third place finish and won the race in 2013 while in the 250SX Class. In two appearances in 450SX, Tomac has gone 2-3 in the last two years. Tomac needs help this weekend, but first he must win. History is on the side on Dungey, but as we witnessed in East Rutherford, anything is possible this weekend. –Stallo

Smith, Osborne and Savatgy at Vegas

Of the three 250SX East Region title contenders, only one has won in Vegas—Joey Savatgy, who won last year on a rain-soaked track while in a tight points battle with Cooper Webb. Who finished second that night? Zach Osborne. Jordon Smith only has one appearance in Vegas, finishing 21st a year ago. Osborne has the most experience out of the three, competing in Vegas four times. His best finish is second. -Stallo

Other Points Battles in 450SX

The battle for fifth tightened up last weekend after Cole Seely had to pull out of the main event after aggravating a groin injury. Rocky Mountain ATV/MC-WPS-KTM teammates Davi Millsaps and Blake Baggett now trail by four and six points, respectively. With Seely out for this weekend, it’s shaping up to be a battle between teammates for fifth.

Entering the final round, Josh Grant trails the sidelined Broc Tickle by 12 points for 10th in points. In the last four races, Grant has gone 8-5-5-7, all of which are worth more than enough points to pass Tickle. Who comes out on top this weekend? -Stallo

Other Points Battles in 250SX

Since there will be two regions racing this weekend, all battling for points, lets break this down by East and West Region.

All eyes will be on the top three, which enter separated by just one point, but a little further down we have a few points battles. Luke Renzland is just four clear of Anthony Rodriguez for seventh entering the weekend. A-Rod has finished better than Renzland in three of the last four races, but the Traders Racing Yamaha rider picked up a valuable three points with a seventh last weekend (A-Rod finished 10th).

Mitchell Harrison is gunning for 10th in points and holds an 11-point advantage over Gannon Audette. Harrison has finished better than Audette in two of the last three races, so 11 points may be too much for Audette to overcome.

Justin Hill has already clinched the championship, but there is still plenty on the line this weekend. After his crash and DNF in Salt Lake City, Aaron Plessinger carries just a one-point lead over Martin Davalos for third in points. They still have a shot at second place Shane McElrath (11 and 12 points back) but it’s going to take some luck.

The battle for 10th is close between Mitchell Oldenburg and Justin Starling. Despite missing five of eight rounds, Oldenburg has shown up big with 4-3-2 finishes. He holds a three-point advantage on Starling entering the weekend. –Stallo