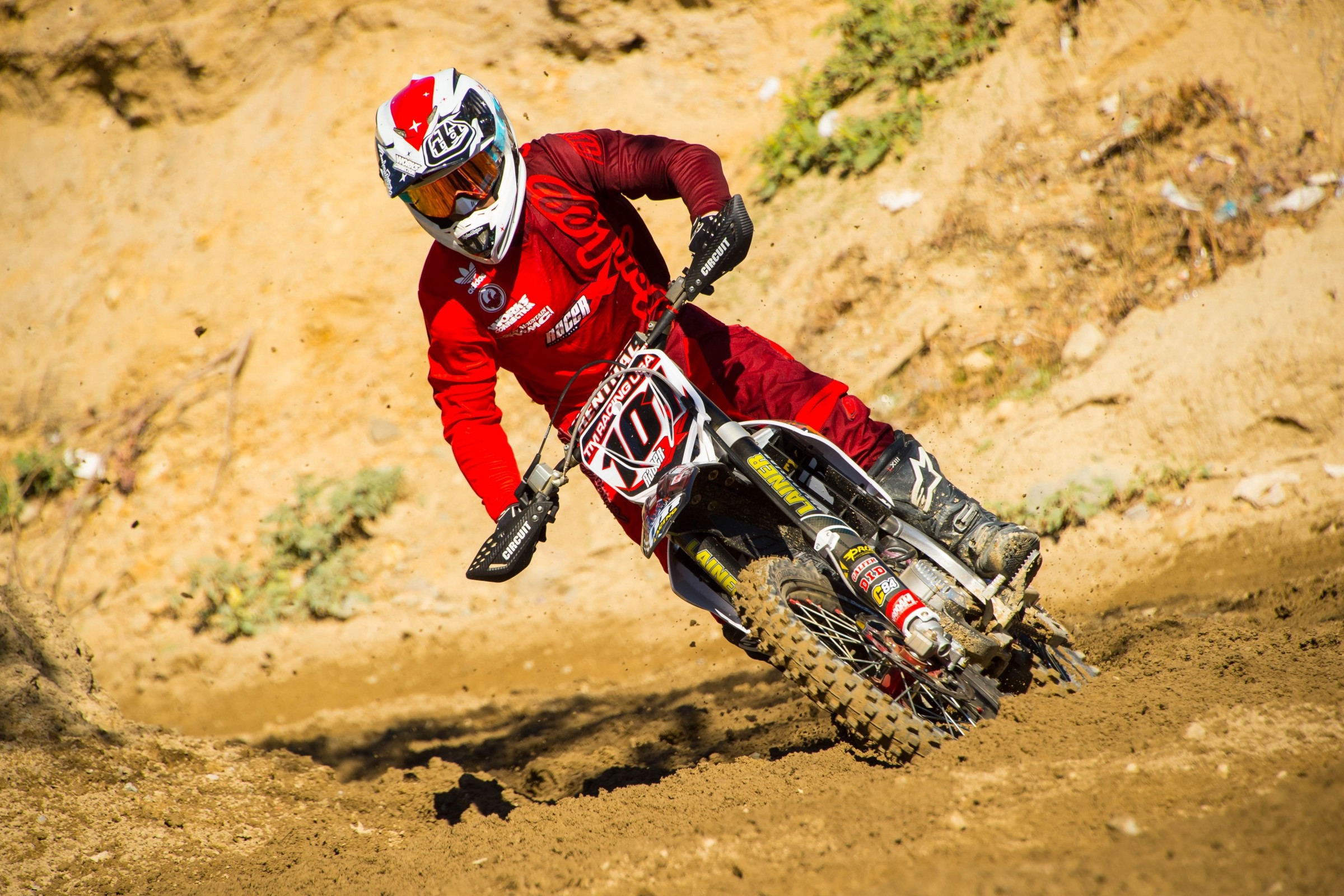 This is admittedly an emotional knee jerk response to what I just saw happen in the closing laps of the New Jersey supercross 450 Main Event. Let's not pretend like everyone with two functioning eye balls didn't see Marvin Musquin deliberately pull over for Ryan Dungey. I can deal with riders carrying out "team orders", IF they would just own it. BUT, the way they are acting like nothing of the sort happened, pisses me off. Musquin's pit board obviously said "1 Lap/ Ryan". Musquin almost broke his neck trying to read it! What is your take on the situation? I understand an employee doing what he is told, but please don't piss down my back and tell me it's raining.

I remember the first time I realized that a fight on television wasn’t real. I think I was watching The Dukes of Hazzard and Luke threw a punch at one of Rosco P. Coltrane’s co-workers and clearly missed. But the deputy flew up onto the hood of the General Lee anyway! I was disgusted and confused. I know a lot of people felt that way after watching the final lap of the main event in New Jersey. It was pretty obvious that Marvin fabricated that mistake to let Ryan go by and score an extra three points in the championship. It’s interesting that KTM renewed Musquin’s contract that very same week, isn’t it? Look, this happens in sports like this including NASCAR, Formula One, MotoGP, and any type of competition where you can help your owner/team win. The Tour de France doesn’t even try to pretend; they have one rider who is trying to win and every other team member does what they can to help him. The manufacturers pay a lot of money to win races and titles and that move last weekend probably earned KTM both.

Sure, Dungey could still win the title without those extra few points, but you have to consider the scenario. We are down to the last two races of the series and Dungey had just lost the lead for the first time since A2. With Marvin out of contention for the championship there is a certain expectation of a team member. From the time I first signed with Mitch Payton until the last year I raced, I understood that. The orders are usually to race each other clean during the season and try not to take each other out. As the series winds down the rider who is out of contention will be told to be “aware” of where the teammate is and don’t race him if he catches you. And, if the title is on the line, there is an expectation to help by letting them by. I’ve never been a part of teams ordering riders to take other riders out or block them, though that has happened. Marvin played it off in the interviews because it’s easier than explaining why you did it and there is a rule against “fixing” results, which Marvin’s move could certainly be construed as. If you didn’t like last weekend’s antics you might not want to watch the 250 final in Las Vegas because I think more of this is on the way.

I enjoy reading your column every week and also enjoy the Racer X YouTube videos where you talk though bike builds and such…keep up the great work! After watching the East Rutherford race last night, my question is why don't all the manufacturers have electric start by now? Honda started offering it as an option on the 2017 models (on the 450 anyway), and KTM has had it for a while (I think since 2007?), so it's not like it is some new, unproven technology. It seems like any manufacturer that has electric start on their motocross bikes automatically has an advantage over those that don’t. Eli did make a mistake which caused his bike to stall, but if his Kawasaki had electric start he could have had his thumb on the start button as he was lifting the bike back up, then it would have been running as soon as it was up and he could have jumped on and went. Instead of losing around 15 positions, maybe he only would have lost around 5 positions. It's impossible to say how that would have affected the outcome of the race, but I think it is fair to say that the outcome probably would have been different, and probably more favorable for Eli and Monster Energy Kawasaki. It seems a little ridiculous that you can go out and spend $9-10 grand on a bike that has fuel injection with different fuel maps to select from, launch control/holeshot assist mode, but an engine that you still have to start by kicking it with your foot; especially since you have not had to do that on a KTM for the last 10 years. If the manufacturers that don't have electric start yet don't add it the next time they update their models, it seems like that would be a major fail, especially if it is potentially costing them championships.

Thanks for reading and watching, Lenny, I truly appreciate it. I’ve been waiting for the other manufacturers to catch on and I’m shocked there isn’t another brand that offers it as an OEM part. Yes, you can buy it for the new Honda, but at an additional cost. I think the Japanese manufacturers are still battling cost and weight when it comes to adding it to their production machines. KTM really has them against the ropes in terms of weight and their ability to make changes to models quickly. I would guess that the 2018 Suzuki and Yamaha will offer electric start. The Kawasaki could take another year or two when they make a big change. Aside from weight and cost, adding electric start pulls the motor down slightly so it would force them to make adjustments to the engine as well. Casual riders like being able to push a button and go, and pro racers could save valuable time in a crash with the addition of that feature so it’s only a matter of time for all of them. How much time? That is the real question.

I'd like to set you straight on some- let's start with just two for now- things:

Granted, I was yelling from the stands and Mr. Tomac was down there on the track, but I did speak my mind to him. That night he won in devastating fashion and has continued to do so. There's no question in my mind that my little talking-to is what did the trick.  The only question now is "Will Kawasaki do what they need to do and fly me to the National opener so I can get a good early start in my role as Encourager Of Tomac, or will I have I to drive myself to Thunder Valley and free-lance again?"  Maybe you could put in a good word for me.

2) This Henry Ford quotation- “Whether you believe that you can or that you can’t, you are usually right”- is B.S. Last August, I bought a brand-new '16 KX250F from Hester's (see (1), above) and on my 2nd ride was eye-balling a sharp-pointed double at the track. I truly believed that my green steed had what it took to make that jump so I lined up, let the ponies run and cleared the jump by 10 feet!!! Now, not only did I believe that I could make this jump, but I KNEW it. The 2nd and 3rd flights went just fine.  After the 4th one, as I emerged from a deep darkness, I wondered how long I'd been lying in the dirt, where I was and if anyone knew I was there. You know of what I speak, yes? Then I felt the searing pain of a badly broken collarbone forcing itself into my consciousness and from there it was just X-rays, plates and screws and scars and doctor bills. So, what the hey? Where did I go wrong? I believed I could, brother, I believed!

Excellent points, my New Mexican friend. In response to your first question, I am glad you were able to get Eli on the right track in Phoenix. Every champion needs a fan in the stands who can give him the ol’ red ass once in a while and force him to get his poop in a group. The Kawasaki folks owe you a debt of gratitude. However, you may want to invent a flux capacitor, install it in a DeLorean and have a chat with Eli before last weekend’s main event in New Jersey because things really went pear-shaped for Tomac and the Kawasaki clan. In fact, an ass-chewing of epic proportions today isn’t enough for Eli to wrap this thing up; he needs luck and lots of it. If my historical books are accurate, the last time Ryan Dungey finished outside the top four was around the time Ice Cube left NWA. Not a hip hop fan? Okay, think back to when Madonna was hot and didn’t look like a bridge-dwelling troll from a children’s book. No? Hall and Oats era? Whatever, my point is that it’s been a long time since Dungey has had a bad finish and the odds of him doing so in Vegas are not good.

In regards to point number two, I believe you are confusing belief in your personal capability with a lack of talent. I can get in the ring with a world champion boxer and dance around for a few seconds, maybe even take a swing or two. But when I regain consciousness and try to piece together where it all went wrong, it isn’t too tough to figure out. Believe all you want, but if you run out of talent you will soon find yourself face down in the muck, reeling from the disappointment. How’s that for a pessimistic juxtaposition to Mr. Ford’s eloquent quote? Feel free to use that on a demotivation poster for your office.