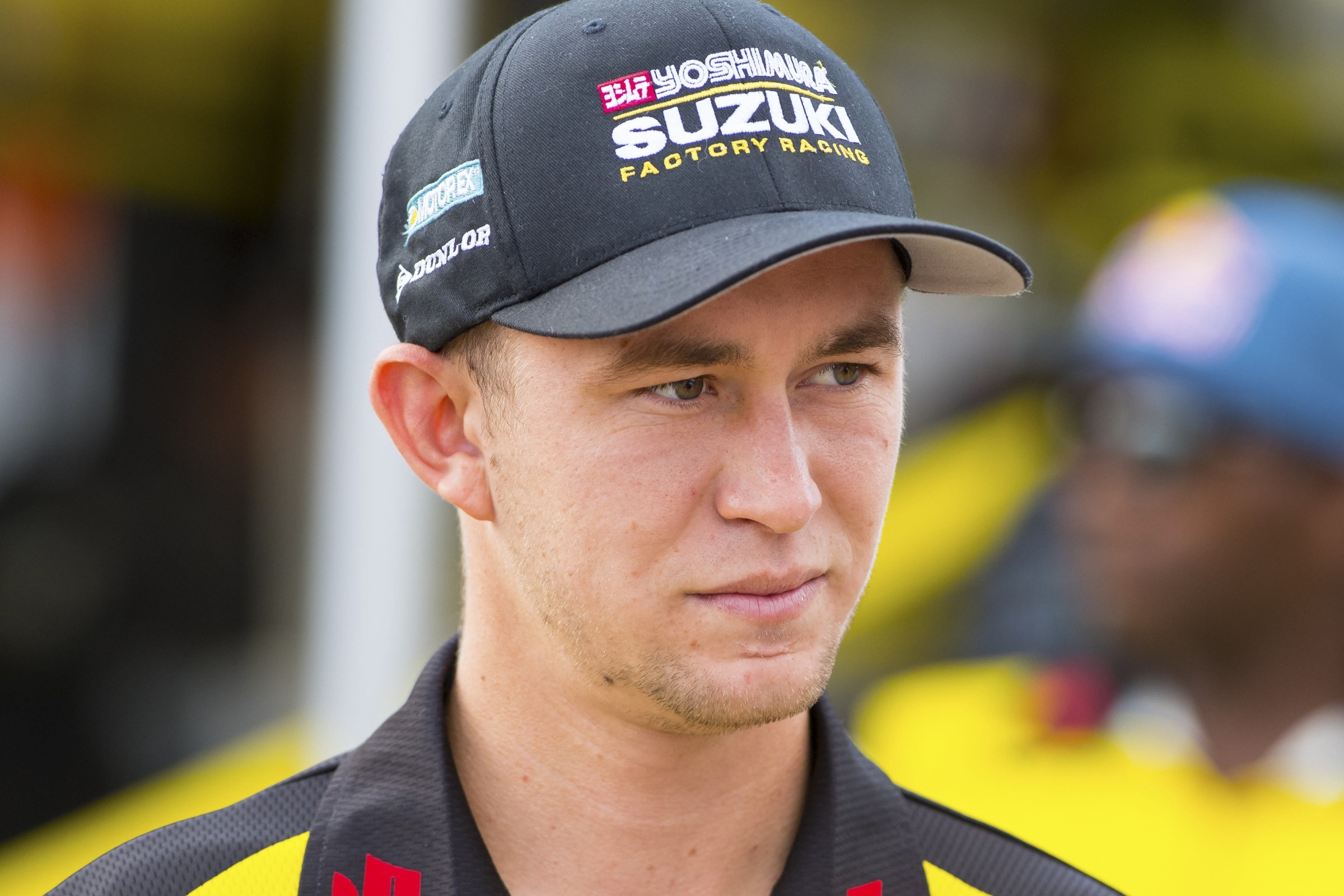 Remember that national in Massachusetts they used to have every year until it disappeared from the schedule after 2013? Well, it’s back and it’s taking place this weekend in the sands of Southwick, where everything from racing in a hurricane to Ryan Dungey making a pit stop for fuel has happened. And with possible rain in the forecast for this Saturday, we just might be in for another wild one at one of the greatest nationals in all of Lucas Oil Pro Motocross. –Aaron Hansel

Before Hangtown, if we’d have told you Blake Baggett was going to be getting top ten finishes by the halfway point you wouldn’t have been surprised. Baggett is just too good not to get those kinds of finishes. But when you take into account he broke his collarbone at the opener and missed a bunch of motos, well, his 7-5 for sixth overall at RedBud is extraordinary. Expect Baggett to improve steadily from here on out, starting with a top five at Southwick. –Hansel

The points lead is starting to grow far in the distance for both Jeremy and Alex Martin. Jeremy is 34 points back and Alex is down 45, both hurt mightily by DNFs at High Point that probably cost them twenty-some points. RedBud is a good track for both of them and it looked like either could win moto two, but they made mistakes while Cooper Webb again rode superbly in the clutch. But Southwick (and of course their home race in Minnesota next week) represents another great chance to get back in it. Alex scored his first career podium as a privateer back here back in the day. Jeremy is expected to be good on sand, too, although his lone national here back in ’13 only offered up 35-6 scores. Whatever they’ve done in the past, they need to start making up points now. –Jason Weigandt

Things sure change quickly in the 250 Class! After holding a 12-point lead over Cooper Webb following Muddy Creek, Joey Savatgy now faces an 11-point deficit heading into Southwick, thanks to a disastrous second moto at RedBud, in which the Monster Energy/Pro Circuit/Kawasaki rider crashed twice. And with Webb seemingly now back at full health and going extremely fast, closing that gap isn’t going to be easy. You think Jeannie Carmichael has had Joey pounding some sand motos this week? –Hansel

No other track on the circuit provides the chance for locals to shine like Southwick. Period. The NESC is one of the better local racing series in the country and has always provided a contingency of riders that line the gate at Southwick in hopes of becoming the next John Dowd. In 2011, it was Mike Sottile, a little-known three-digit privateer, who flat out beat Ryan Dungey, Chad Reed and Ryan Villopoto to qualify fastest out of the B practice. Who should you look for this year? Jason Brooks is one name that keeps getting tossed around—by even the great John Dowd. We asked a few guys who would know a thing or two about who to watch for and here are some other names that got brought up. Robby Marshall, Ryan Dowd (son of THE John Dowd), Aaron Zielfelder (son of Factory Connection’s Rick “Ziggy” Zielfelder), Eric Grondahl (son of Mike Grondahl, who owns the track), Ben Robinson and Seth Ciccarelli. –Chase Stallo

The Rippa is Back

No list of local favorites is complete without mentioning the Rippa, Jimmy Decotis. Following the supercross season, Decotis underwent arm pump surgery and will race his first round of Lucas Oil Pro Motocross at his home race this weekend. If you follow Decotis on Instagram, you know he’s been putting in the laps at the ‘Wick. Can you imagine the scene is Jimmy D pulls off the first overall win of his career? Hell, the locals would probably be content with a holeshot. –Stallo

Back to the Original

For the first time since 2005, the track will run counter-clockwise—or the original way. Earlier this week we spoke with John Dowd, who along with Keith Johnson and Mike Grondahl has been a big part of the renovation process at Southwick, about the decision to run in the original direction and what other changes we may see this year. “You make a right off of the start now. That seems like it’s the majority favorite direction, plus it’s the old-school Southwick, and that’s what everyone likes to remember. We bought back some of the old sections and obstacles that people really seemed to like. We have a couple of new sections, too, that people really seem to like, they really seem to flow good, and they’re fun to ride. Hopefully it all works out and everyone likes it.” Counter-clockwise or clockwise, it doesn’t really matter, the ‘Wick is back, baby! –Stallo

Could we see a wet return to Southwick? It’s a strong possibility, as weather.com is predicting a 90 percent chance of rain on Saturday. It won’t be the first time it’s happened at Southwick. Who can forget the hurricane conditions of 2011 that saw an unlikely podium from then-Eleven 10Mods rider Alex Martin; or a moto win from Justin Barcia, who made the late season jump to the 450 Class; or the 250 moto win from Gareth Swanepoel, who currently trains the majority of the Yamalube/Star Racing team. What about 2009? When a rain-soaked Southwick saw Matt Goerke (who currently rides in Canada) take his first, and only, national win. Could we see a surprise winner this year? –Stallo

Eli Tomac was clearly frustrated after RedBud. After being so close to Roczen a week prior at Muddy Creek, Tomac struggled last Saturday, losing by 31-seconds after leading early in the second moto. “Another day of seconds. I was kind of searching during the motos,” he said in the post-race press conference. What changed? “The only thing I can pinpoint this week is just track conditions this week were a lot rougher than last week was,” he said. “It wasn’t even close to the same. This is probably one of the roughest tracks of the year, just bumps everywhere.” Tomac has had success at Southwick, winning the 250 overall in 2013 (the last year the event was run). Can a return to the sands of Southwick bring Tomac any closer to Roczen? –Stallo

Justin Barcia laid it all out in a refreshingly honest interview with Jason Weigandt after RedBud. Citing recent results, Barcia said: “Honestly it would be way better if I got paid way less getting the finishes I’m getting.” It’s been better, though, as Barcia has put in his best two rides of the season the last two weeks. And he has a favorite of his coming up this weekend. “I love that place. It’s changed a lot over the years, though. I’m not really sure what we’re going to get,” he told Weigandt about Southwick. As mentioned above, Barcia took a moto win here in 2011, and also won his first career 250 overall here in 2009. The sandier the better for Barcia, and as we confirmed this week with John Dowd, Barcia is getting exactly what he wants: “The videos I’ve seen the base looked pretty hard but I heard the Junkyard Dog and Treadwell are out there throwing sand on the place and trying to make it more sandy,” Barcia said. “So I can only hope that it’s really sandy and rough and fun. I enjoy that place, so it should be good.” Will this be the race to turnaround the season? -Stallo