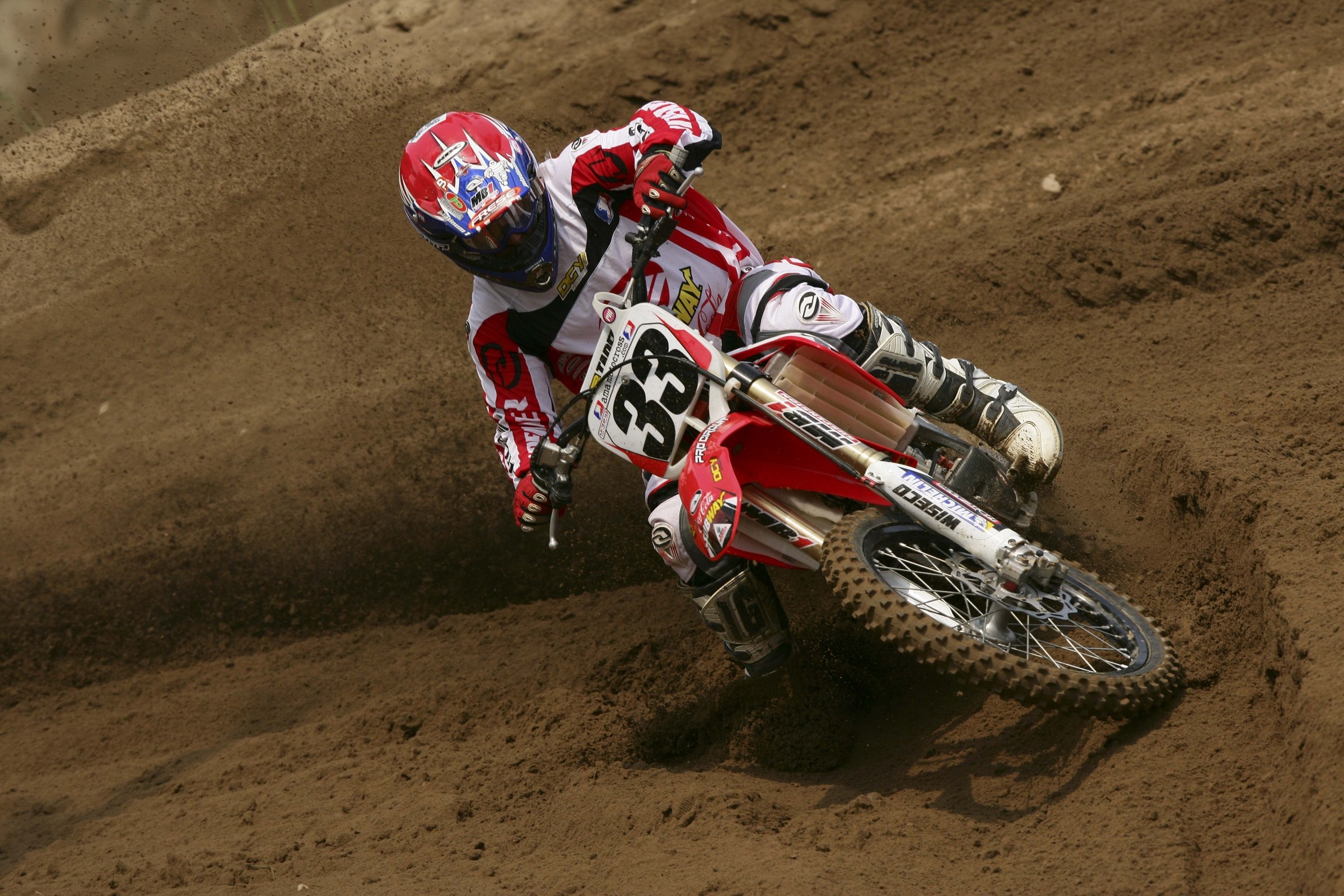 David Pingree: At what part of the day? Riding the Southwick sand early in the day is as fun as any track you've ever circulated. You feel like a dirt bike hero, twisting the throttle hard as you flow from one perfect sandy berm to the next with no significant bumps to impede your progress. It's a lot like skiing a powder day in the mountains except its not cold but really warm and sticky. And then, after several hours of the world's best hammering on it, Southwick turns into a torture device; the iron maiden of motocross tracks.

The rhythm that you had earlier goes away because the bumps are so big, and there’s so many of them that you are constantly pulling up on the handlebars to keep your front wheel from dropping into the abyss between each one. As your lower back begins to fail from fatigue you'll find yourself sitting more and getting bucked by every bump, the coup de grace for an already exhausted racer.

The track robs momentum like no other track in the series. If you let off the throttle for a second or lose your speed around a corner it feels like it takes you several turns and straightaways to build it up again. If the savage beating from the endless sand whoops doesn't grind you down, the sand in your eyes and down your pants will. Literally. There isn't another track on the circuit that tests you like Southwick. I'm so glad it's back... and that I don't have to race it again.

Jason Thomas: Southwick is a beast. Regardless of how they choose to prep the course, it's going to get very, very rough. Practice is actually pretty fun as it's usually smooth and fast. It gets a bit scary to push the limits for a qualifying lap but hey, this is motocross at the highest level so suck it up buttercup. The first practice is massively important as far as qualifying goes, as it's virtually impossible to improve on your lap time in the second session. The braking bumps are emerging, lines are being pushed to the outside and the limit on just how fast you can go has been lowered.

As the day continues, the track will become rougher and rougher. For those of us who grew up riding sand, Southwick would be a bit mystifying because it's not the typical sand track. Southwick has a much harder base than most would expect, causing the bumps to form differently and also adding more wheel spin to the fray. Where most sand tracks are characterized by an endless array of rolling bumps, Southwick has much sharper edges and harder impacts. The harder base also affects line choice as riders will be more mindful to stay in the berm itself and to watch their RPM when dropping into the hard surface beneath the sand. It's definitely a different feel than most sand tracks out there but most riders at this level can make the adjustments to find a rhythm pretty quickly.

2. How much does it change throughout the day? Can you give an example of a line maybe being totally different from practice, or moto one to moto two, or early in the race compared to the end?

Thomas: Southwick undergoes an interesting transition when it comes to optimal line choice. Early in the day, the lines are pretty straightforward. Most riders enter the turns from the middle to outside and then carry speed through the center of the turn. Basic motocross strategy. As the day grows long, however, the bumps force riders to change it up and get more creative. The normal thought process has to be reconsidered as the main line gets so rough that it not only slows the pace, it also simply wears the rider out. Under normal circumstances, no sand rider worth his salt would enter a turn on the very inside. That arc makes it impossible to carry that all important momentum that sand riding requires. It's not only the very inside that becomes viable, though. At times, the extreme outsides come into play and riders will draw very unorthodox lines back across the main line in order to avoid a blown out berm or large bumps. It really becomes a think-tank of how to maintain momentum but also avoid the roughest sections of the track. Riders like Ken Roczen and Marvin Musquin will begin jumping the bumps, hopping in and out of berms, and riding the very insides under low RPM, all in an effort to reinvent the wheel. These techniques won't work until the track is at its roughest but when they finally become viable, it's magic to watch them utilized.

3. Do you have a “Holy crap this local dude was hauling ass!” story?

Pingree: The first couple years I raced there I couldn't understand how a rider I'd never heard of was capable of beating me just because a track was sandy. Guys like Tony Lorusso, Scott Carter and Mike Treadwell would go flying past you in practice or during one of the morning qualifying races like you were in the front seat of the struggle bus. Meanwhile, under your helmet, you thought you were lighting the world on fire until some three-digit local clowned you around some outside line you never ever saw. I can't remember if it was 1995 or 1997 but I was riding for Pro Circuit and I almost didn't qualify for Southwick. I crashed in the first turn in the qualifier and couldn't make it back into qualifying position by the time the race was over; that should have been an indication to me that this race is an anomaly.

In the LCQ I remember my mechanic was telling me that I needed to pin it and I could sense how nervous he was. I had never had a problem qualifying before so I didn't see why this race was any different. I started towards the front but got passed by several riders with zip codes for numbers before the opening lap was completed. I didn't start panicking until the second or third lap when I was still outside of qualifying position. I had a local rider in front of me whose name I had never heard of. I had never seen him at an amateur national, never seen his name on the results sheet from a pro race... this guy literally came out of nowhere and was about to put me in the bleachers for the day while he made the motos.

I wound up my Kawasaki, squinted my eyes and channeled my inner Dutchman to find a way around this no-name bastard that was raining on my parade. I remember thinking that Mitch would absolutely eat me alive if I didn't qualify for the motos. Somehow, someway, I snuck past this obscure rider from the Northeast and made the motos, keeping my streak of never failing to qualify for a national alive. I don't know who it will be, but I'm sure some random kid from Worcester or Gloucester or some other place that sounds nothing like it's spelled will come out of the woodwork this weekend.

Thomas: Back in my early days of the pro ranks, the local NESC series racers ruled Southwick. Not only did you have legends like John Dowd and Doug Henry, you also had the journeymen pros like Keith Johnson, Mike Treadwell, Tony Lorusso, Scott Carter, Pat Barton, etc., to deal with. They had ridden thousands of laps at Southwick and knew how every turn would shape up long before a bike hit the track. I was always impressed with their speed even in the opening laps of the day but when the track deteriorated, that's when their real expertise shone through. They would employ lines and different approaches to each section that I hadn't even considered.

Much like in question #2, they just had these weird ways of turning the track on its ear that outsiders just couldn't comprehend. The line choices would make no sense but they knew that the track would change and the normal ways of attacking a track wouldn't be optimal anymore. I can remember being passed by the locals in spots that didn't seem possible, going speeds that I was sure were unsafe. It was in those moments that I realized why everyone immortalized the Southwick heroes. For one weekend every summer, they were able to race on a level that was unrealistic by all expectations. Southwick's strange sandy-yet-hard surface, its throng of screaming fans behind the starting gates, its ever-changing gauntlet of ruts and berms, and its aura that puts a smile on every New Englander's face at the mere mention of it, all played a part in putting the local pro rider face to face with the world's best.