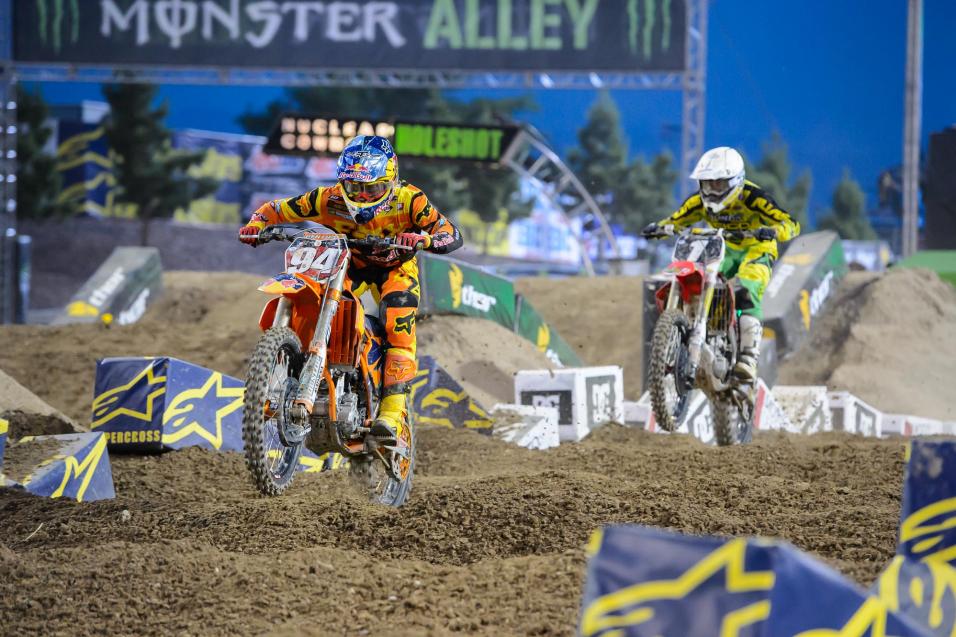 It was an amazing night for Monster Energy Supercross all around, with a packed house, great title fights in the 250SX classes, an exciting race track and plenty of superstars still in the mix in the 450SX division. The overall theme of the event was “The Changing of the Guard”, which Feld Motorsports pushed via posters and signs around the facility, and also with tomorrow’s season review show on CBS. And with the celebration of Ryan Villopoto’s latest title, and a whole new crop of fast grads about to head into the 450 class for next year, things are only going to get better.

Ryan Villopoto’s win was the perfect final stamp on an amazing season. He started about sixth—he and Ryan Dungey accidentally touched in the first corner, so they both lost ground—then somehow immediately passed his way up to second. His teammate Jake Weimer was frisky and battled him a bit, but soon RV was off and gone to his tenth win of the season. The champ left no doubt to why he is, well, the champ.

Ryan Dungey rode solid in second and made a few runs at Villopoto, but he couldn’t make up enough ground to show him a wheel. Behind Dungey, Davi Millsaps did what he needed to do, scoring a solid third, enough to hold Dungey behind him in points and finish second for the second-straight season. 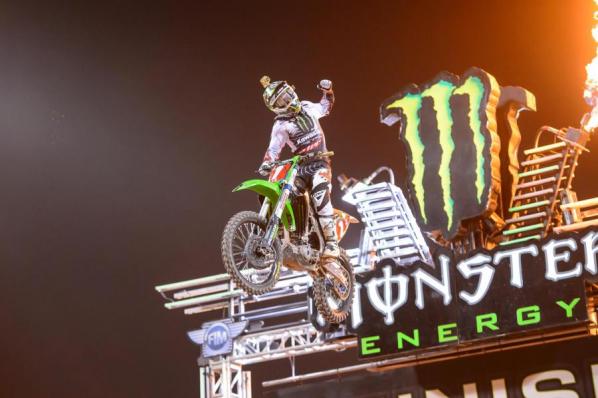 Villopoto took his tenth win of the season. 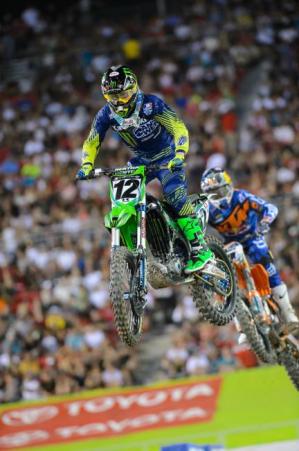 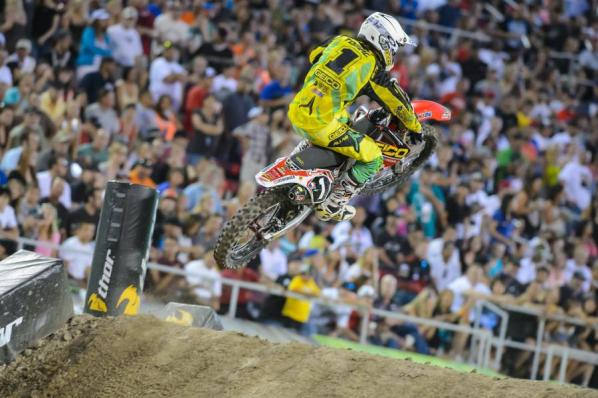 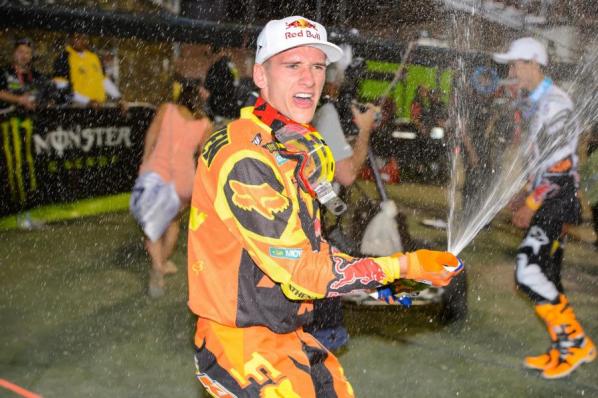 ...and Roczen both showed they could handle the pressure.
Cudby photos

Weimer logged his best night in awhile, leading Dungey for most of his heat race, and then battling hard throughout the main event to take a top-five finish.

At one point Justin Barcia made his way around Weimer and took over fourth, but then Tevin Tapia went down and Barcia couldn’t jump a triple, and Weimer snuck back past to take fourth.

Late in the 450 SX main, there wasn’t much battling going on, so the crowd had to tune to a Weston Peick/Chad Reed battle, and a Justin Brayton/Andrew Short battle behind that. Wait, Peick/Reed? Indeed. The privateer passed the two-time SX champ in their heat race, and creeped up to him in the main event. But each time he tried to make a move, Reed responded, held him off, and got away. Behind that, Brayton eventually edged past Short to take eighth.

The real action came in the 250 mains, and you certainly saw how the championship fight motivated the contenders. In 250 East, Tyler Bowers rolled out to a big lead, and then was helped further when he jumped a triple, and then a rider crashed, leaving Marvin Musquin and Wil Hahn to have to roll it. Late in the race, Bower’s win seemed assured and Musquin looked too far back to catch him. But the Frenchman put on an incredible charge, rolling off a last lap nearly three-seconds quicker than Bowers, and he nearly caught him at the end! Musquin admitted he was pretty tired by the time the East/West Shootout popped up later in the night, because he went all out trying to get that East Main Event win, and the title that would have gone with it.

Hahn’s title came with drama, as he crashed on the very last lap of practice and hurt his hand. Fears are that it’s broken, but somehow the GEICO Honda rider soldiered on and fought his way through the main to finish third and clinch the title. After that, he was off (and not racing the Shootout) because he needed to get his hand checked out.

Bower’s win was legit. There may be some talk this year about the East having a weak field, but the riders at the top—Musquin and Hahn, for example—are not slouches, and Bowers came out with a victory over them. It was only the second win all season for Monster Energy Pro Circuit Kawasaki. Nice pickup for them!

In 250 West, Eli Tomac ended any and all doubts about his ability to ride under pressure with a spectacular come-from-behind ride for the win. Ken Roczen also showed great championship mettle, digging deep to catch and pass Martin Davalos for the final pass needed to take the title. Forget what you saw or thought after Salt Lake City—these kids were ready to step up when it counted. 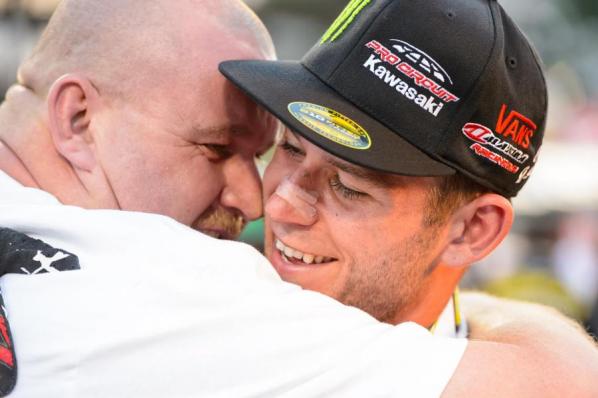 Bowers gets a hug from his dad. 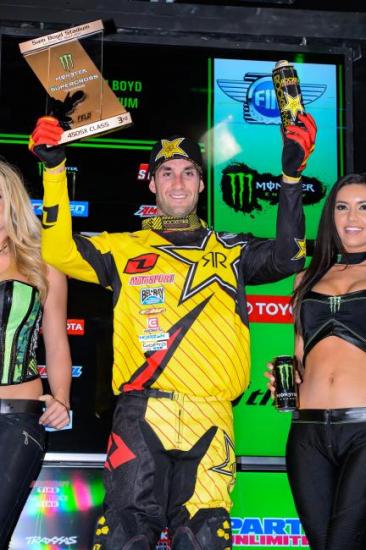 Millsaps last run to the podium helped secure second in the standings for the second-straight year.
Cudby photos

Roczen put icing on the cake with his Shootout win, battling early with Musquin then getting away. In all, an amazing SX season for Roczen.

Kyle Cunningham always seems to go fast in Las Vegas, and tonight was no except as he passed Musquin and took over second. He couldn’t get Kenny, but it was a solid ride for the Yamaha rider overall.